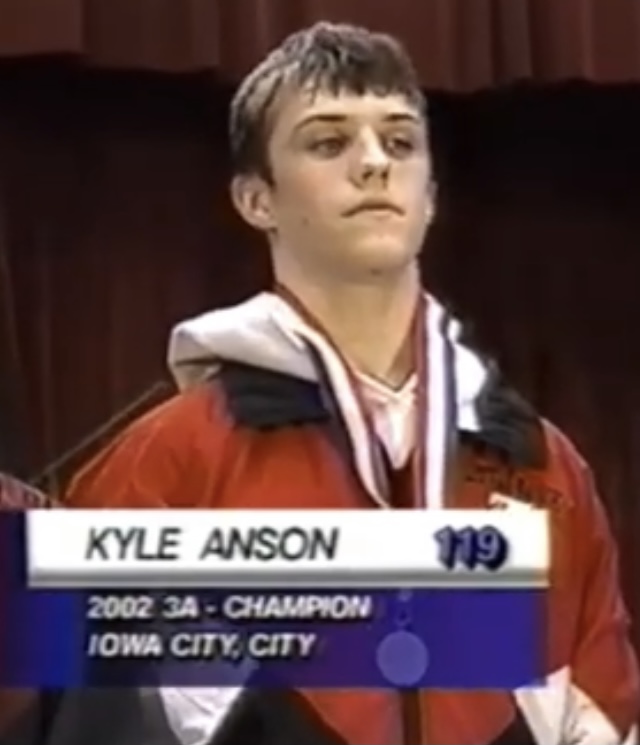 Kyle Anson was a 3X state champion out of Iowa City High who placed 1-3-1-1 and finished with a 164-9 record. Given the fact that Anson did not win 4 titles and that he had 9 losses in his career (all against the highest caliber of competition), some of you may have him written off already, but hear me out! This kid was incredible. 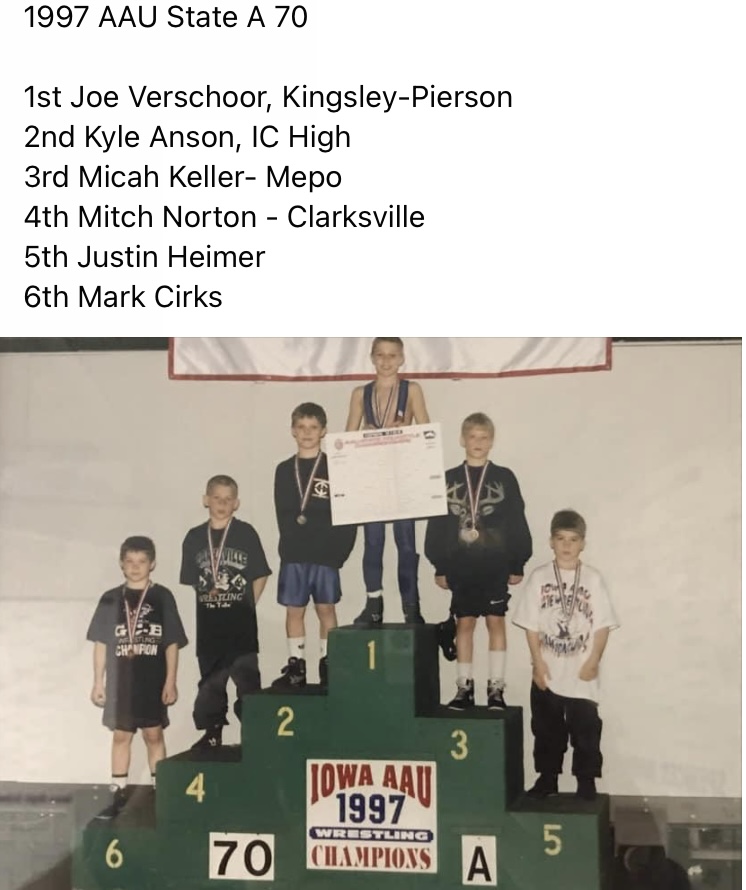 I could tell that there was something pretty special about Anson pretty early on. Like when he was in the 2nd-4th grade range. There was a year where he and one of our best guys at Mepo, Micah Keller met up. They met up at a youth tournament (I think Mepo) and state. The first time they met up, it was highly anticipated, for both guys had done well in the past. And Keller won this one rather handily. It seemed like Anson had great technique for his age and was a grinder…he just kept coming after Micah, but Micah was able to get by unscathed because of having the upper-hand physically and with some of the natural funk that he always carried in his arsenal. Kyle spent the rest of the day sitting down with an extremely upset expression on his face. You could tell this kid hated to lose and no matter how that match went, he was going to do what he could to ensure that never happened again. 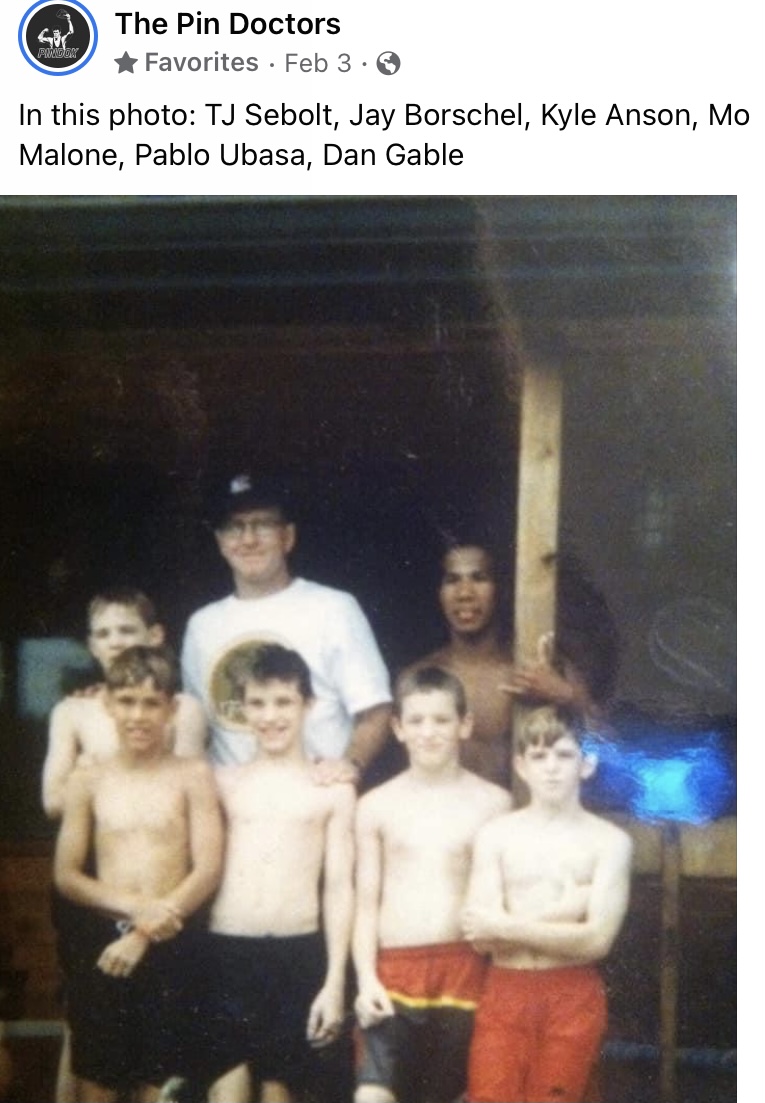 Fast forward to the AAU Tournament later that year and those two were set to meet up again in the quarterfinals or semifinals. Just to be honest, our crew basically had that one penciled in as a win for Micah. He was rolling the entire season pretty much, without much of a hiccup. And when those two took the mat with each other, Anson made it clear that he had made some adjustments. Everything Micah had going for him in the first meeting, Anson had an answer for it this time and was able to tack on early points because of it… and it was making Micah visibly frustrated. And while Micah was visibly frustrated, Anson had this wild, intense expression on his face that indicated to anyone who was watching that he had a mission accomplished and was going to come after Micah the entire duration of the match without wasting a single millisecond on being anything, but intense. The narrative of the match had been established fairly early on and it was not going to go the same way it did the first time. He was a madman out there, and the physicality he displayed out there reflected that…. And Micah did not like it. Long story short, Anson frustrated Micah to the point where he simply wanted off the mat. It appeared as if he gave up and let Kyle pin him. Those who were watching, were stunned. Anson went on to place 2nd to Joe Verschoor from Kingsley-Pierson in the finals, but he made his point in that tourney. At least in my eyes. I didn’t realize that the little exchange those two had would be foreshadowing for what we would all witness years later from Kyle Anson.

Soon enough he developed a reputation as being one of the elite guys in that entire 2005 graduating class, which was, in my opinion, the most stacked class we’ve ever seen come through this state with guys like Anson, Dan LeClere, Micah, Borschel, Ryan Morningstar, Joe Slaton, etc. Anson was legit and anyone with a brain, knew it.

When Anson entered HS, everyone knew he was the real deal, but I don’t think many people thought he would accomplish what he ultimately ended up accomplishing, for that task would be daunting for anyone. He was at 3A 119 as a Freshman… which was the same weight where a couple of highly-touted D1 recruit Seniors who had won previously won state themselves were set to be at. Their names were Ryan Osgood of Mason City and Dominick Moyer of Oskaloosa. Ryan Osgood had placed at least twice coming into his Senior year and one of these included a state championship the year before as a Junior, in which he defeated Moyer in the quarterfinals or semis. Anson and Osgood had actually met up in the regular season with one guy winning one apiece. I remember when he beat Osgood during the regular season… that’s when we started hearing some people chattering on the forums, “wait a second, is it possible? Does this Anson kid, a FRESHMAN, actually stand a chance at winning the 3A 119 division, which contains 2 of the best Seniors in the entire grade?” Well, we were about to find out if Anson really meant business in the Semifinals at state that year, in which he and Osgood were paired up again. To start the match, it appeared as if the answer to that question was, “no,” for Osgood took an early 3-0 lead. Most Freshman in this situation, being down 3-0 to the defending state champion Senior (and future NCAA qualifier for UNI) would have succumbed to the pressure. Kyle wasn’t any ordinary Freshman… it seemed to just make him more intense. He scored at least 3 takedowns and 2 back points and secured an incredibly impressive 10-7 win over one of our state’s best Seniors, which rocked the Iowa wrestling world the moment it happened… Kyle Anson was officially a state finalist as a Freshman at 3A 119, which was arguably the deepest bracket of the tournament. No matter what the outcome was after the finals, Anson had accomplished something incredible and the entire wrestling community had been put on notice…

Kyle won a huge semifinals match vs. one of the best in the state, but was far from finished. He still had another task, just as daunting as the one he accomplished in the Semifinals. In the finals, he was paired with 2X returning state champion, Dominick Moyer… a proven elite talent who was a future NCAA qualifier himself for Nebraska. Those two had met in the regular season, with Moyer being the victor. The state finals match that took place between the two of them was one of the most thrilling, impressive displays of wrestling that we have ever seen. Undebatable. Both of them put on an absolute show for the fans in attendance. Moyer got up early and just when it would seem like he was starting to secure the match, Anson would strike back, never losing that intense “madman” expression on his face, never letting up a single second, no matter what the tempo of the match seemed to be. There were several moments in that match where it felt like, “ok Moyer won, there’s no way Anson can come back from this.” Anson just would not let off. Eventually the match came down to a sudden-death situation where Moyer was down, Anson on top and there was one final :30 second period. If Moyer got out, he won. If Anson rode Moyer out, he won. USUALLY, the guy on bottom seems to have the advantage here and in this case, it appeared as if Anson was dead in the water, for Moyer was rarely ever ridden out, by anyone… And Anson defied logic again… despite numerous situations where it appeared Moyer was getting out, Anson rode Moyer out and ended up winning 6-6 by criteria decision. The moment he officially won the match, Kyle’s persistent expression of intensity made an immediate shift to absolute elation. You could hear him giggling, he was so happy. It was one of the most impressive feats that anyone has EVER accomplished in the history of our Iowa HS state wrestling. My brother’s finals match was following that weight on the 2A mat and this match was about the only thing I can imagine that could distract my attention from my nerves.

Here is the match video for that: 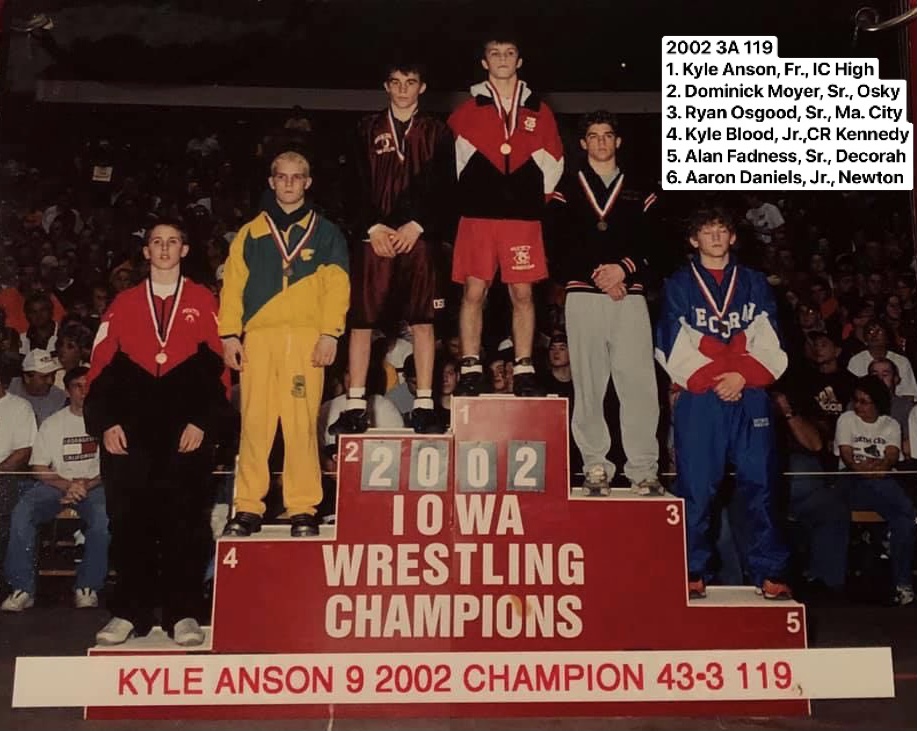 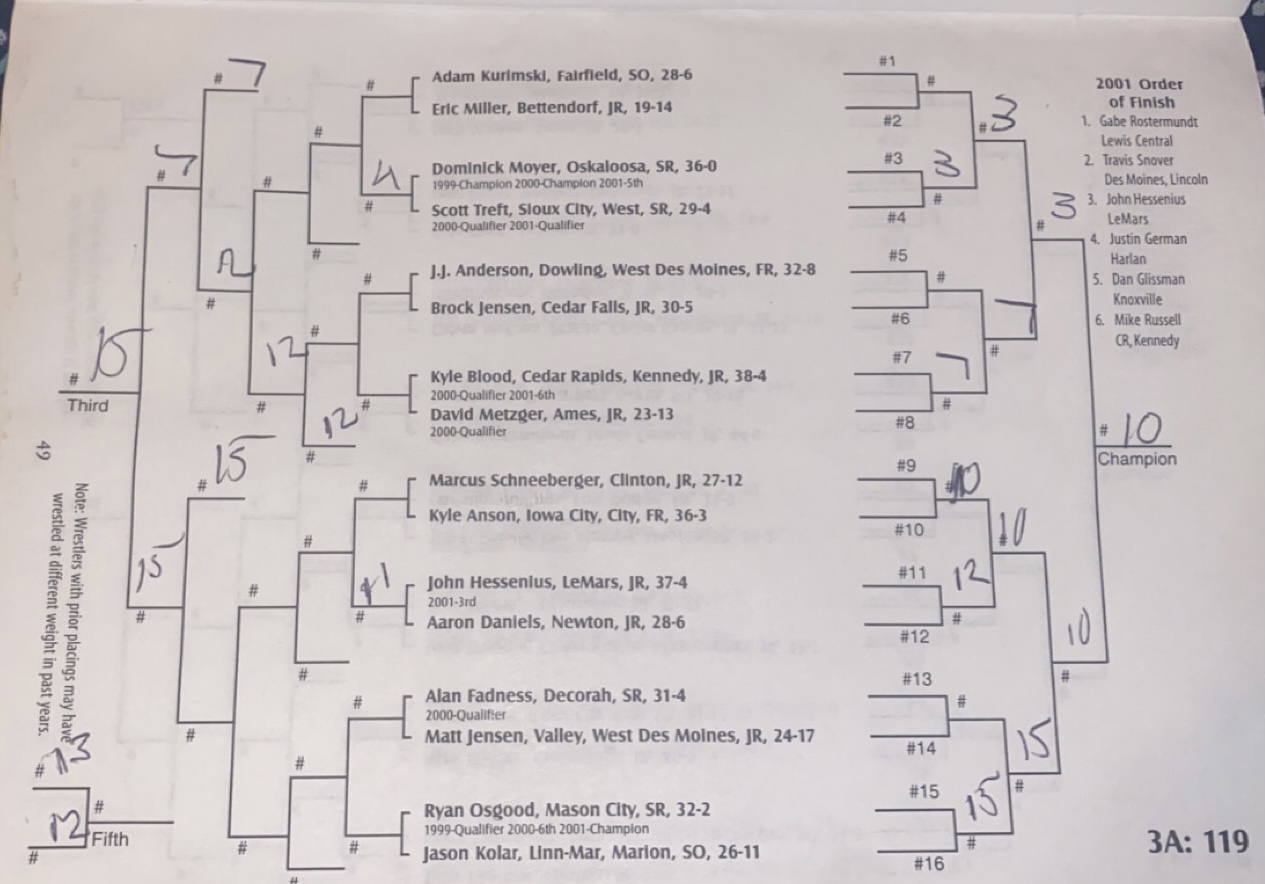 The following season is the one and only season in which Anson did not win state, for he fell 6-2 in the 3A 125 Semifinals to a guy in his grade named Jay Borschel from Linn-Mar, who was on the way to winning what became 4 state titles (and won an NCAA Championship for the Hawkeyes). You have to give Anson credit on his mental toughness, though. His goal/dream of becoming a 4X state champion had been crushed in that match and he bounced back to finish 3rd… that bracket was so deep that a Senior who was a former 2X finalist/1X Champion named Gabe Rostermundt from Lewis Central actually finished 7th. Just to give you some perspective on how tough it was on the consolation side. 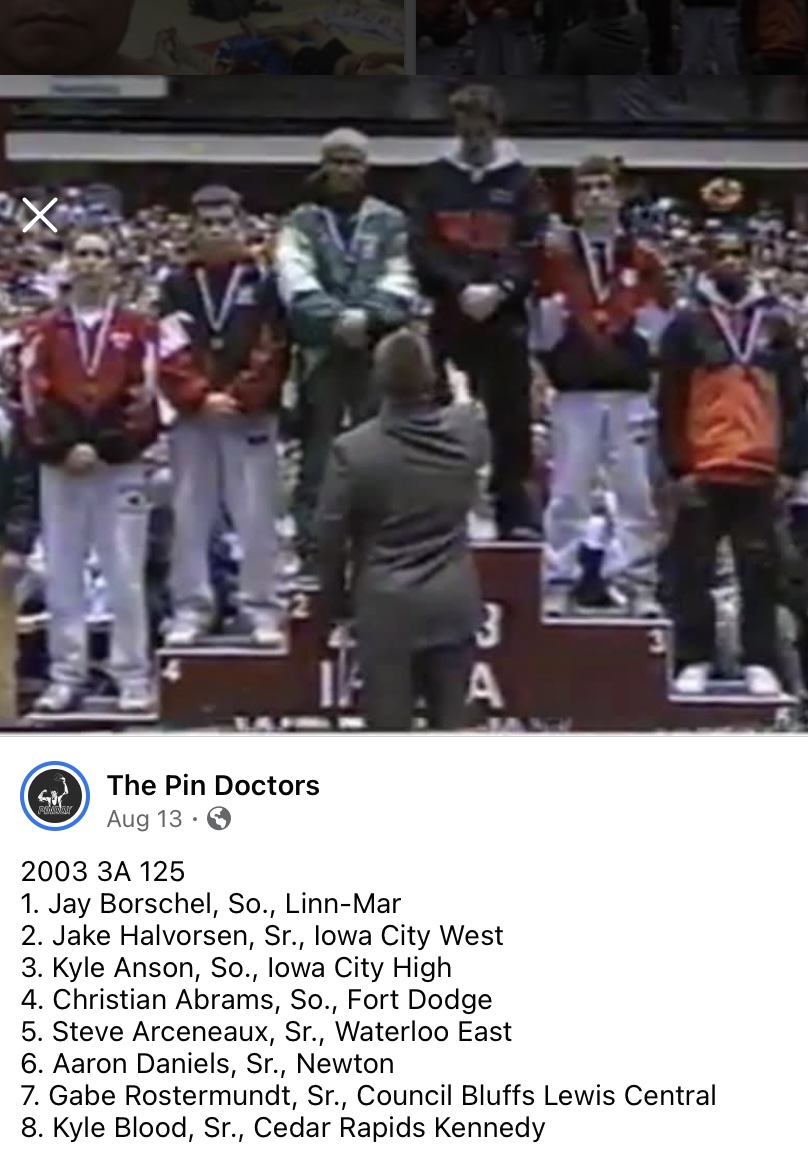 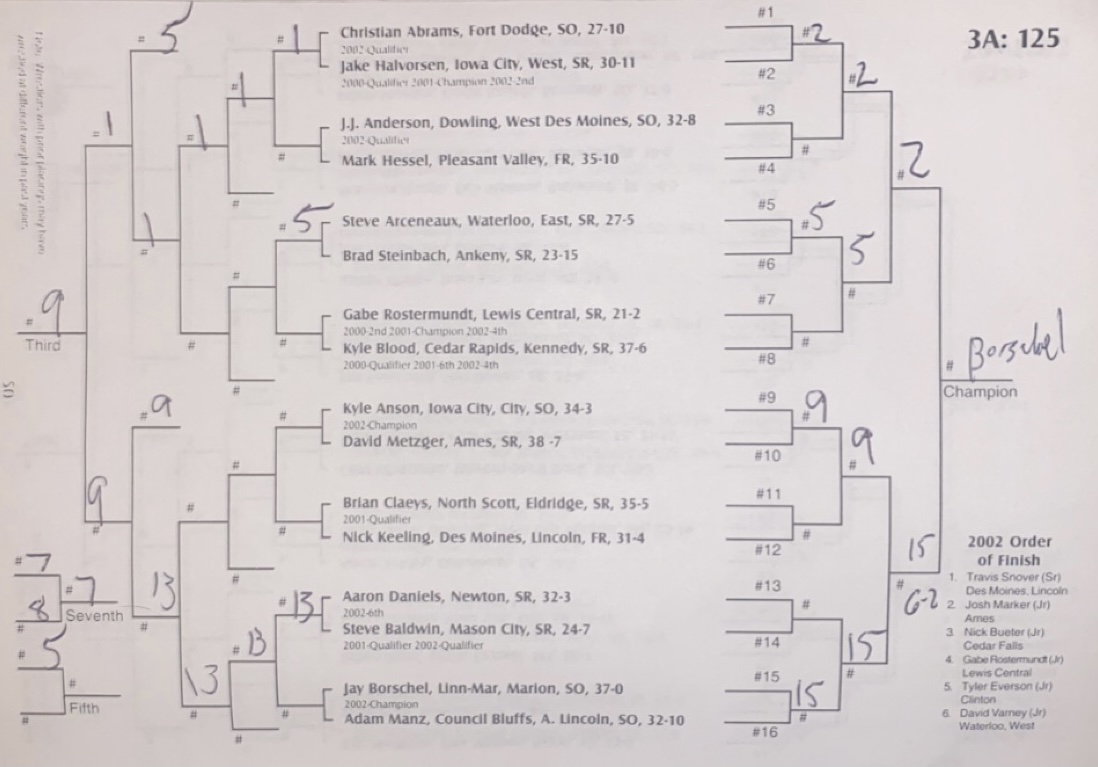 Anson would win another state title at 3A 125 his Junior year. His 2nd of 3. And in doing so, he added yet ANOTHER amazing postseason feat to his resume… He defeated Eric Hoffman in the finals…The defending state champion who was just on fire at the time. Kyle beat him 10-3. That is 3 combined state champions that Anson knocked off in pursuance of his first 2 state titles. Impressive. 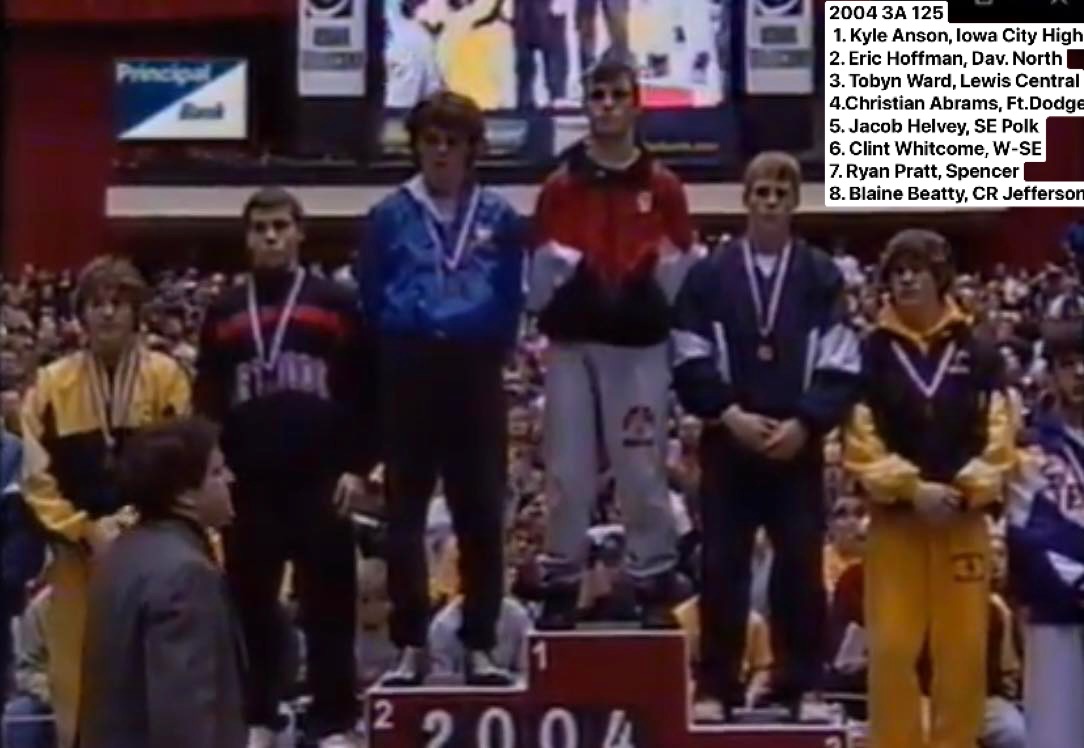 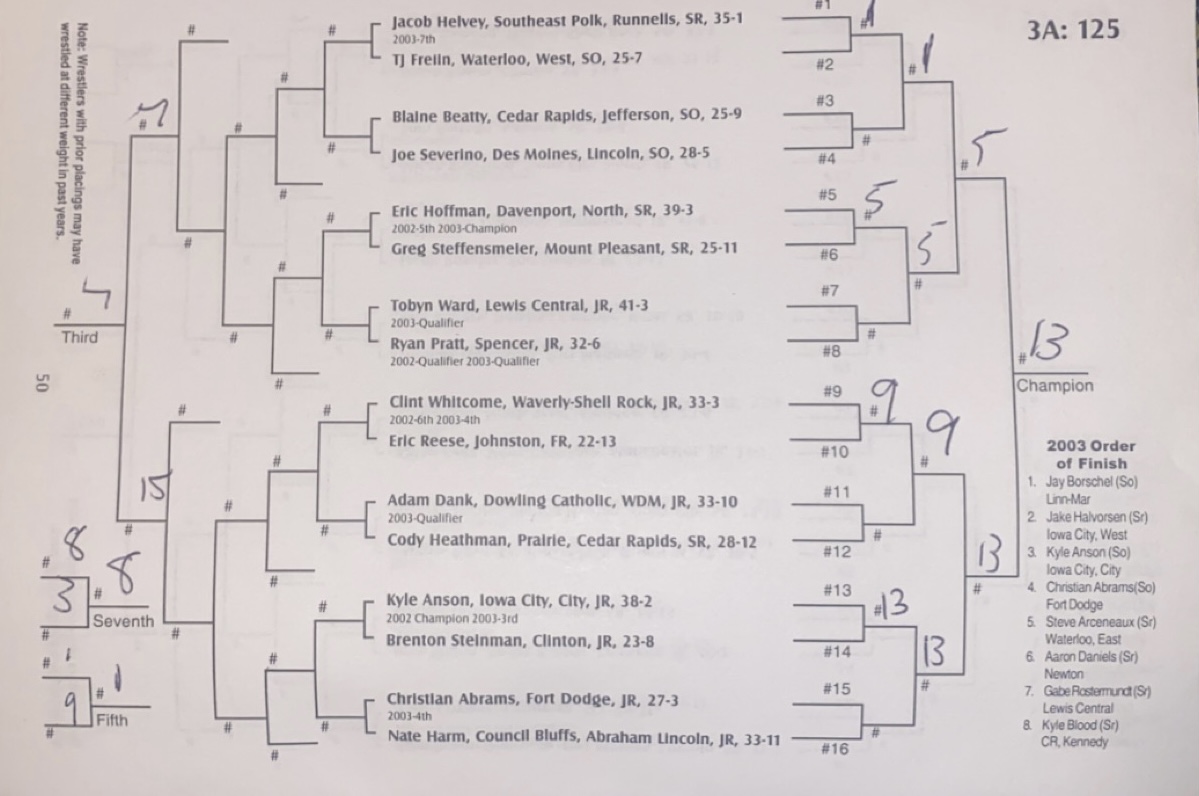 Anson had an unscathed, undefeated Senior season in which he locked up his 3rd title. He pinned Kalen Lenz from West Delaware in the finals. 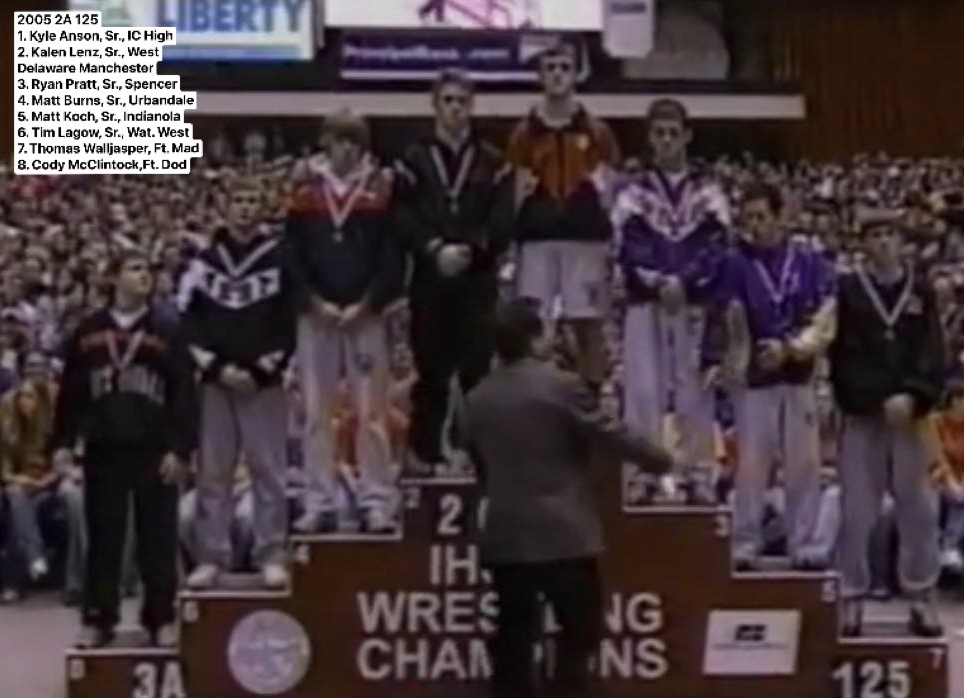 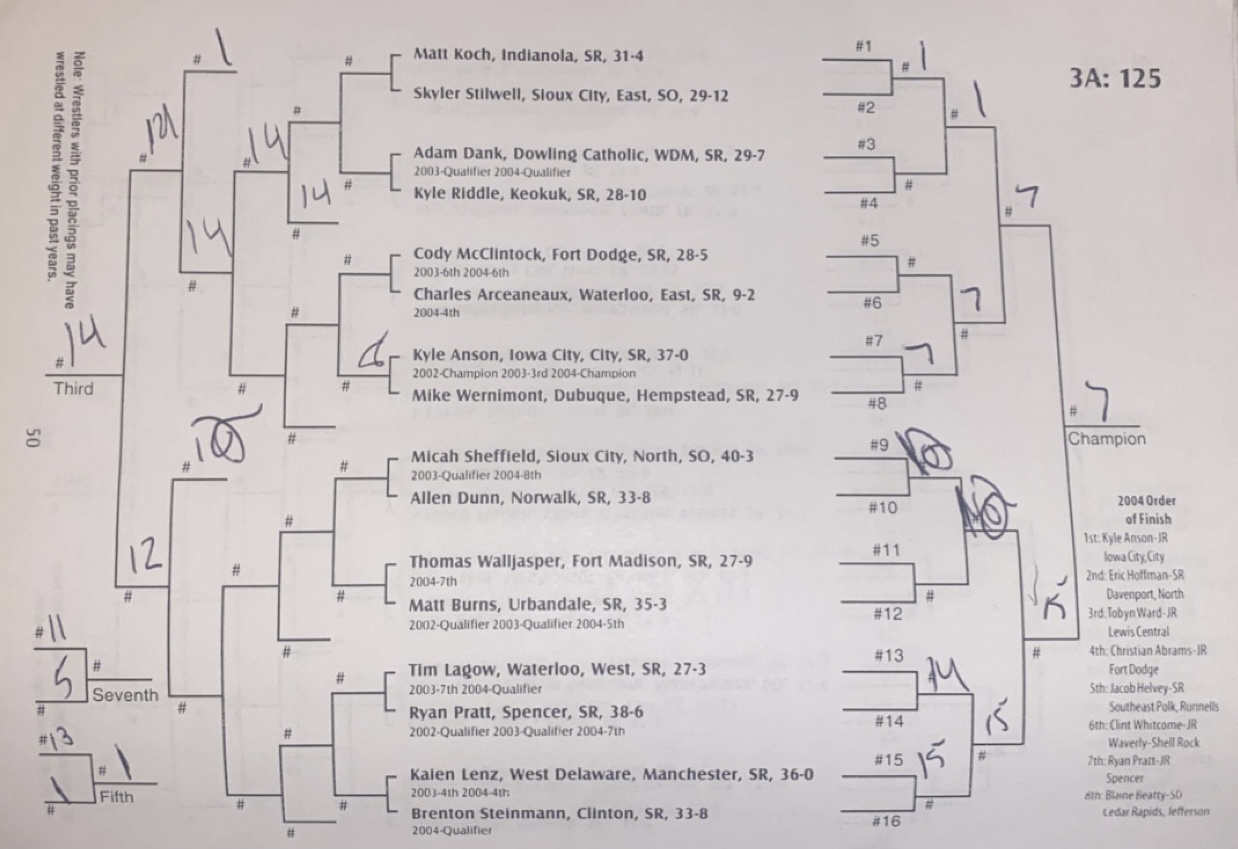 On top of Kyle’s HS postseason heroics, he also made the First Team All-American Wrestling Team his Senior year in 2005. Kyle also placed 6th in 2004 and 4th in 2005 at the Fargo Junior National Freestyle Championships. 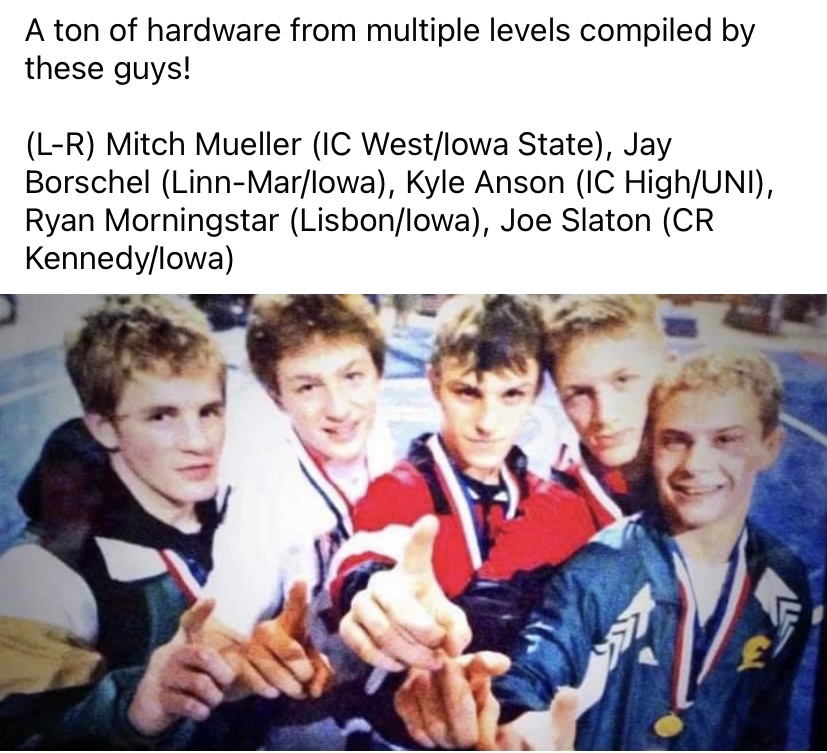 Anson would go on to wrestle for UNI, where he put together a very respectable career when he was actually able to compete. His collegiate career was littered with injuries. However, in 2007, he was selected as the Western Wrestling Conference Freshmen of the Year and qualified for the NCAA championships at 133 pounds. Kyle was eventually forced to give up the sport due to the accumulation of the injuries he sustained over the years. I hear he gave it another try after transferring to Iowa, but his body had enough…. If you ever saw him wrestle, it wouldn’t be difficult to see how this would happen to someone like Kyle. He was all-out, all the time, without EVER letting up even if it required putting his body on the line. 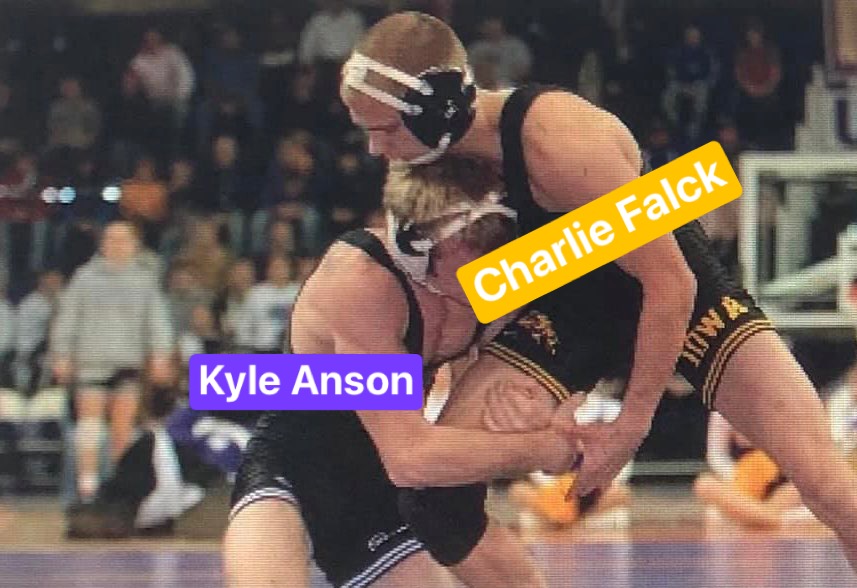 So does Anson have a case for being the Iowa HS wrestling GOAT?! On paper, he does not. He took too many losses (all to elite competition) compared to some other guys who never lost in HS and Borschel would have criteria on him after their semifinal match their Sophomore year. However, from a personal opinion standpoint, and I know I’m not alone here, Kyle Anson, IS one of the greatest HS wrestlers to ever go through Iowa, as far as I’m concerned. Just ask anyone who wrestled against him, alongside him or watched him… They won’t have anything negative to say, I guarantee that. Kyle Anson may not have had the GOAT career on paper, but he had some of the GOAT MOMENTS I have ever seen out of any Iowa HS wrestler I have ever witnessed. 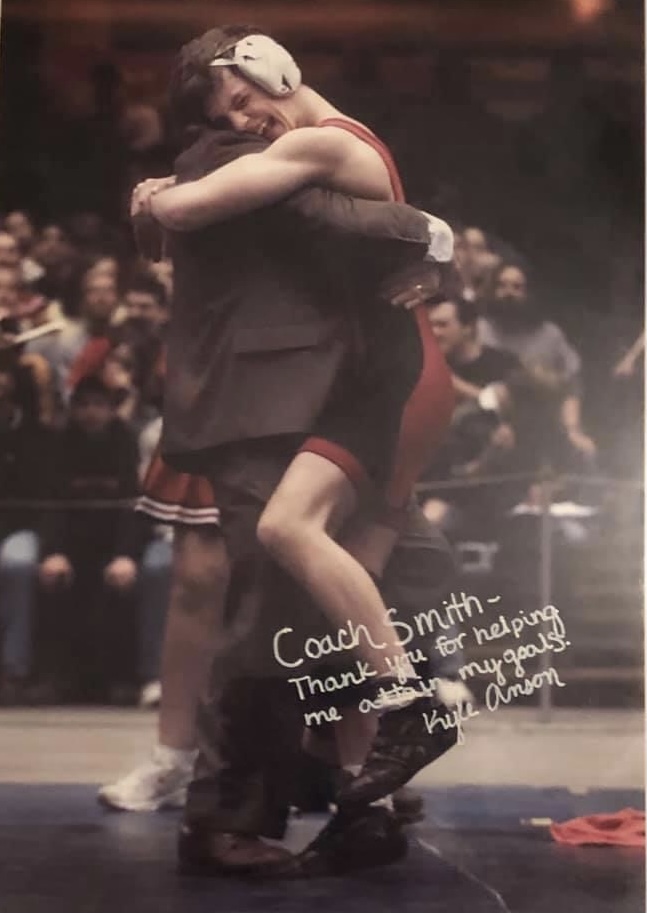 “Kyle exemplifies what every coach wants in their wrestlers. A hard-working, goal-oriented leader who is mentally and physically tough.”