How Close Were The 3Xer’s To Winning 4? Kent Streicher of Starmont and Adam Allard of West Sioux 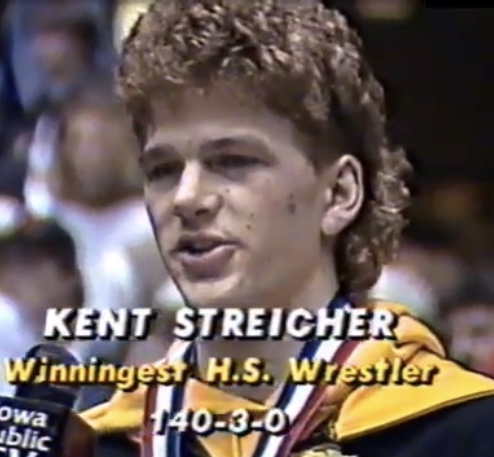 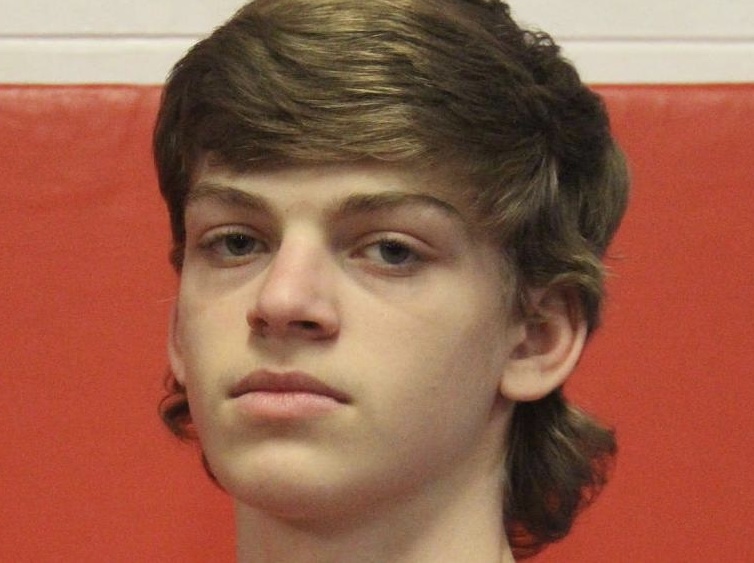 To make this series more interesting, I try to group guys that are either connected in interesting ways or have something in common with each other. In most articles, 4-5 guys are discussed, but just two for this one.

With that said, most of us know what happened with Adam Allard this year and immediately after it happened, the Ike Light (Lisbon) comparisons were brought up by several fans on social media. Reason being, prior to Allard this year, Ike Light was the only guy ever to be beaten at the state tournament his Senior year when wrestling for his 4th title when he lost in the semifinals to Dan Gabrielson of Belmond-Klemme. I see how people draw the comparison between Allard and Light, but I see more comparisons between Allard and another wrestler in terms of how close they were to winning 4 titles. That man’s name is Kent Streicher and he wrestled for Starmont. He (as well as Allard) is one of the best wrestlers to go through the state of Iowa and they literally couldn’t have been closer to winning 4 titles. 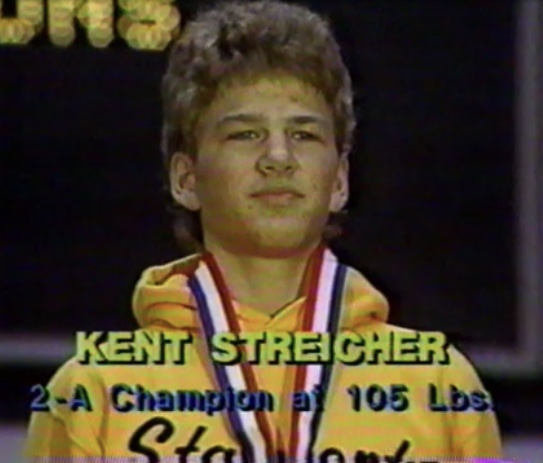 I had no idea how close Kent Streicher was to being a 4X state champion until I began putting those old state tournament videos together. Holy…canoli.

Streicher was pretty fun to watch. He had tons of energy. It could be 5 minutes into a hard-fought match and he would be pacing around like the match hadn’t begun yet. With his hair and the way he walked around the mat, I couldn’t help, but ask myself if WWE’s The Ultimate Warrior had a “minime.” On top he would go from a tilt and if that wasn’t working, would switch right to an arm-bar and if he turned the guy, but didn’t pin him, he’d hook up that same arm-bar and if the arm-bar didn’t work, he’d try to use a tilt from it. And he was comfortable in crab ride positions and a variety of other positions that other guys try to avoid, but he didn’t because he was Kent Streicher and he was really good there. He would scramble with anyone. He seemed to like being there. He was the type of guy who would take risks to earn high rewards. Would give up 2 points if he thought it’d put him in a better position to score 5. A gunslinger-type mentality. Like the Brett Favre of Iowa High School wrestling. This approach pays greatly at times, but can have drastic consequences. My brother, Justin could be like that. He lost a couple state finals matches because he had those tendencies. And it kind of got Streicher into a bit of trouble the one year he lost in the finals.

Streicher was a Junior the one season he did not win state. At that state tournament, he lost in OT in the finals to returning state champion from Centerville and future 3X NCAA Finalist for the Hawkeyes, Chad Zaputil. And get this, Streicher was actually leading, 5-2 with 18 seconds to go in the 3rd period. They had a restart due to a potentially dangerous situation and Streicher was going to be in the top position. He gave up a point immediately because he was cautioned for starting before the whistle. That was his 3rd or 4th caution, so the official awarded Zaputil a point. 5-3. In the remaining seconds of the 3rd period, Zaputil was bucking like a bronco, trying anything he could to get out and Streicher was successful in riding him out for the win all the way until the last couple seconds when Zaputil “hipped out” and scored a reversal in which it appeared Streicher would have been tilted and put on his back for near fall if there was any more time on the clock.  This sent them to OT. 5-5. This match took place in 1988 and OT was a little different back then. To my understanding, they basically wrestled three 1 minute periods and the guy who was leading at the end of the 3rd OT was declared the winner. If they finished on a tie again, they would use a criteria in which the manner(s) in which they scored their points would determine the outcome. For example, a near fall had criteria over a takedown, a takedown more criteria over a reversal and a reversal had criteria over an escape. Zaputil took Streicher down in the first OT and Streicher reversed  Zaputil right away. They headed into the 2nd OT tied, but with Zaputil having criteria over Streicher because Zaputil’s takedown had criteria over Streicher’s reversal. Streicher chose down and Zaputil rode him out… which didn’t happen much with Streicher. They headed into the 3rd period and Zaputil chose to wrestle on bottom. Streicher tried to turn Zaputil for the majority of the period and just barely fell short. In the final seconds of that period, Streicher had to make a choice. Either keep trying to turn Zaputil to take a lead and win, but risk finishing with a tied score in which Zaputil would be declared the winner via criteria. Or he could let Zaputil up and give up the 1 point for the escape, but put him in a situation where he could score 2 points via takedown. Streicher let Zaputil up and came after him hard and opened himself up in the process and almost gave up another TD at the end. Zaputil won the match. Streicher’s quest for 4 titles came to an end.

Streicher finished his career with a 140-3 record. His 140th win was in his Senior year finals match and was the career wins record-setter at the time. I believe he went on to wrestle for the Iowa Hawkeyes after high school. 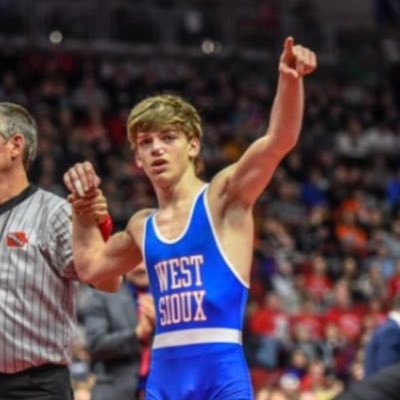 This one is still pretty fresh and I am guessing that 90% of you know what went down here. Adam Allard was a 3X state champ on his quest for 4 and on track to doing so until the final seconds of his state finals match of his Senior season. He was up 2-1 against returning state champion from Cascade, Aidan Noonan with short time in the 3rd period and was in the bottom position (not a good place to be with Noonan…Noonan is one of the best riders to ever go through the state of Iowa). While time was running out, Noonan tilted Allard to his back and scored a 3 point near fall to win 4-2. It was terribly heartbreaking for Allard and in the age of social media, we were able to view a lot of it in terms of different camera angles and what not. For anyone who did follow it, it would take a pretty cold heart to not feel bad for the kid, even if you don’t know him personally. Allard committed to wrestle for Doug Schwab at UNI and it was pretty cool to see the picture taken of Doug consoling and talking with Adam in the stands after he received his silver medal. I obviously don’t know what was said between the two, but Schwab obviously has a good way of handling these situations, for Adam was smiling in the picture with him. That was a very cool move on Schwab’s part, for he had several committed Panthers wrestling that weekend and one of them had won his 4th title (Cael Happel). He could have been spending his time in a more upbeat setting if he was selfish. It’s good to see that Schwab seems to understand the importance of being there for his guys when they experience heartbreaking situations where they need it most.

Allard finished having only 2 losses in his career. 206-2. He was on a 201 match winning streak coming into his Senior finals match. 2 of the guys he beat in the finals were state champions themselves; Daniel Kimball of Don Bosco and Cole Siebrecht of Lisbon. As mentioned, he is going to wrestle in college for Doug Schwab at UNI and he seems to have bounced back a bit, for he had an outstanding win in a freestyle dual tournament against a kid named Drake Ayala from Fort Dodge. Ayala is one of the best wrestlers I have ever seen go through the state of Iowa. Allard teched Ayala in the first period by taking him down with an ankle pick and gut wrenching him a few times.  I do realize that there is only so much you can take from an off-season match, for no one knows what’s going on with everyone considering injuries, weight, training regimens, etc. and it varies a lot. But no one can watch that match and deny that the ankle pick Allard hit on Ayala to take him down was just absolutely sick. I think it’s safe to say that Allard is on a redemption tour and he just may succeed in this quest. Don’t sleep on Adam Allard right now. He appears to be in a good place on the mat right now and is still improving. UNI fans should be happy with him.

SOME INTERESTING SIMILARITIES BETWEEN ADAM ALLARD AND KENT STREICHER:

* Both were upperclassmen the one year they lost in the finals. Streicher a Junior, Allard a Senior.

* Both had leads with just a few seconds left in the 3rd period in the one finals match they lost.

* Both were the 2nd state champions in their program’s history.

* Both were the 1st 3X state champions in their program’s history.

* In the finals match they lost, both of them were beaten by a returning state champion that won their 2nd title by beating them.

Next post: How Close Were The 3Xers To Winning 4?!? (Interesting Connections With Them) Josh Budke, Mark Kist, Matt McDonough, Jack Wagner, Kyle Biscoglia

Previous post: WHO IS THE IOWA HS WRESTLING GOAT?!! The Case For Max Thomsen of Union/UNI Panthers