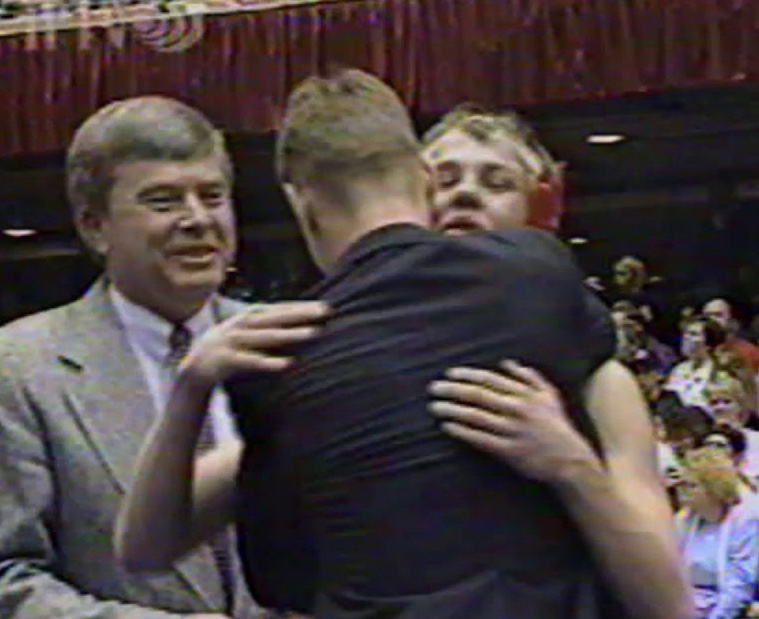 Josh Budke won state titles for Cedar Falls HS as a Sophomore, Junior and Senior. He beat Gabe Capps from Indianola in the finals in his first two championship years (1995-1996) at 103 and 112 and defeated Jesse West from IC High in the finals as a Senior in 1997 at 3A 125…avenging multiple regular season losses in which West, who was previously from Kansas, was the victor. The only year he did not win state was his Freshman season. That was in the bracket: 1994 3A 103… Budke placed 4th. The guy who won that bracket was Mark Rial from Fort Dodge. Budke finished with a 155-11 career record. 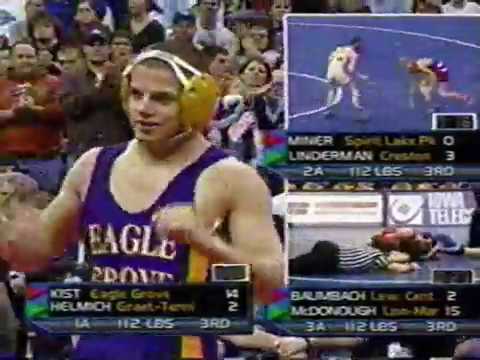 Mark Kist won state titles as a Sophomore, Junior and Senior in 2004-2006. He won them 1A 103 once and 1A 112 twice. Mark was also accomplished on the freestyle scene and was a 2005 Junior National Champion as well as a 2006 Northern Plains Champion. He finished with a record of 151-8 and wrestled 2 years for The Iowa State Cyclones and 3 years for the Wartburg Knights. He finished with a career record of 151-8. The only year he did not win it was his Freshman year, in which he placed 6th at 1A 103 and was very undersized that year. 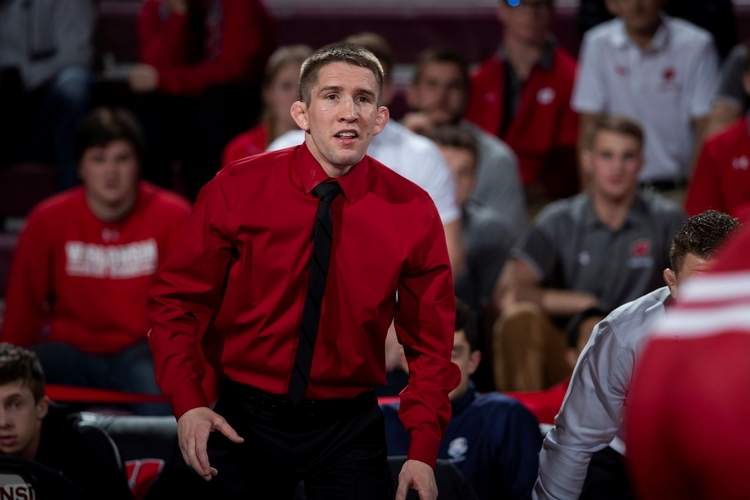 Matt McDonough won state titles as a Sophomore, Junior and Senior in 2006-2008. He finished with a career record of 151-15 and was very accomplished on the Freestyle scene in high school, for he was a Cadet National champion and 2X Junior AA. McDonough wrestled for the Iowa Hawkeyes and was a 3X NCAA Finalist/2X Champ. The only year he did not win state was his Freshman season in which he placed 6th. Mark Ballweg of Waverly-Shell Rock defeated Nate Moore of IC West in the finals that year and McDonough won the 3A 113 bracket in which Ballweg was in the following year. 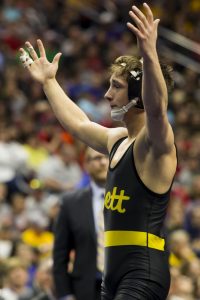 Jack Wagner won 3 state titles for Bettendorf in 2014-2016. I remember his first Varsity wrestling tournament as a Freshman. He was in the same bracket as my brother, Shea at the Jeremy Fulk Classic in New London, Iowa. This tournament accepted JV and Varsity participants.  Shea was a Freshman that season himself and had recently lost his “tie-breaker” challenge match to eventual 4X placer from Mepo, Mason Buster who was also a Freshman that season. This was prior to Shea making the decision to wrestle up a weight to solidify a spot in the Mepo varsity lineup. Wagner defeated Shea in this finals match, rather handily. Both guys went on to place their final 3 years in high school, with Wagner winning those 3 years… both JV and in the finals of a varsity tournament that first week… kinda crazy. Wagner was in a log-jam as a Freshman behind Jake Schwarm at 106 who went on to place 2nd at state that season.  Bumping up wasn’t an option either, for Paul Glynn had the 113 spot. Wagner was already very undersized at 106 as it was. The combo of 3A guys in that age/weight range with Wagner, Brendan Baker (CR Jefferson), Nate Lendt (SE Polk) and Triston Lara (Fort Dodge) clashing with each other every year was pretty fun, to be honest. All 4 of those guys were competitive as hell with each other and they all seemed to know how to push each other’s buttons, for you knew that you could see some tempers flare up if any combo of those 4 took place. Wagner was a Fargo AA with a 3rd place finish in 2013. 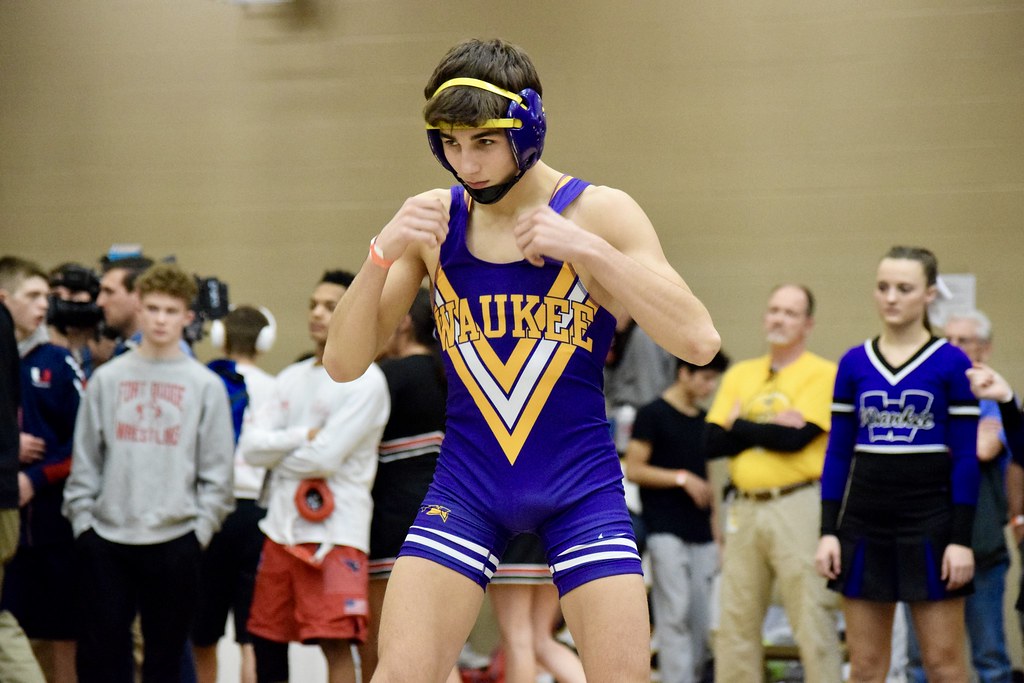 Kyle Biscoglia won state titles as a Sophomore, Junior and Senior in 2016-2018. Kyle defeated future state champ Nick Oldham (Valley) in the finals as a Sophomore, Jay Schipper (North Scott) as a Junior and Ben Monroe (Ankeny Centennial) as a Senior. He was a 2X USA Folkstyle National Champion in HS and a 2X Fargo AA. The only year he did not win state was his Freshman year… He was a very small 106 lber that year and was stuck behind full-sized 106 lber, Jakob Allison in the lineup who went on to finish 2nd behind Brody Teske from Fort Dodge that year. I believe Biscoglia did bump up to wrestle 113 at districts, but was probably 25-30 lbs. lighter than those guys by the time they took the mat with each other. Biscoglia finished with a record of 191-11. I’ll always remember Biscoglia for his career-long rivalry with Fort Dodge Dodgers; Drew Bennett and Brody Teske.

SOME INTERESTING CONNECTIONS BETWEEN THESE GUYS:

* All 5 would have benefited from a 98 lb. division if it were not taken out in the early 90s.

* All 5 were active and accomplished on the freestyle/offseason scene.

* In both Biscoglia and Budke’s Freshmen seasons, their weight was won by a Fort Dodge wrestler. For Budke, Mark Rial won 3A 103 in 1994. For Biscoglia, Brody Teske won 3A 106 in 2015. Both Budke and Biscoglia finished with 11 career losses, most of those coming their Freshmen seasons.

* McDonough and Budke wrestled their entire collegiate careers for the Iowa Hawkeyes. Wagner also wrestled a year at Iowa.

* Wagner and Biscoglia were both undersized at 3A 106 lbs as Freshmen and both were behind “Jake’s” in their team’s lineup that year. Wagner was behind Jacob Schwarm and Biscoglia behind Jakob Allison. Both those “Jake’s” were runner-up at state in those years, with Schwarm placing 2nd to Henry Pohlmeyer of Johnston in 2013 and Allison placing 2nd to Brody Teske of Fort Dodge in 2015. Biscoglia did give 3A 113 lbs a shot at districts as a 90-something pound Freshman, but was beaten out of districts. Jack Wagner won that bracket at state the next week. Both guys are currently at UNI now. Wagner has been wrestling 133 and Biscoglia has been at 125 so far wrestling behind now longtime Panthers starter, Jake Schwarm.

Previous post: How Close Were The 3Xer’s To Winning 4? Kent Streicher of Starmont and Adam Allard of West Sioux