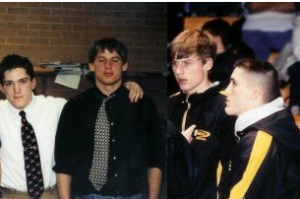 I’ve known Tyler Rash my entire life. The first wrestling practice I ever attended as a seven year old first grader, Tyler and his brother Trevor were both there. Throughout elementary and junior high, I never wrestled Tyler much. I was always about 10-15 lbs heavier than he was. It wasn’t until high school that he became my workout partner.

When it comes to giving it your all and working your ass off on a daily basis, you’d be hard-pressed to find anyone more qualified for the position than Tyler Rash. During my four years of high school wrestling, I won the hardest working wrestler of the year my freshman, junior and senior seasons. It took everything I had, maybe even more than I did, to stay one step ahead of Tyler. To outwork him I had to put my body through limitations I didn’t know it could reach and that today I look back on wondering how in the Hell I ever did it.

In nearly all things Tyler and I were neck and neck. In the weight room he could out bench press me, but I could out military press him. Our nightly battles on the mat were all out wars. He’d take me down. I’d take him down. He’d put me on my back. I’d put him on his back. Black eyes, bloody noses, fat lips, you name it, I’ve received them all courtesy of Tyler Rash. I’m sure I gave him a few too. In our only official meeting, in a match that still haunts me 18 years later, Tyler beat me 5-4. It was our sophomore year. In the closing seconds of the third period, Tyler led me 4-2. I took him down to tie it up, but I could not keep him down. Right as the whistle blew he escaped from me and edged me by a point.

At the moment I didn’t realize how good Tyler was. It wasn’t that I had lost to just anybody. It was that I had wrestled well against a kid that nearly twenty years later I have to conclude was one of the best wrestlers from Sigourney high school to never qualify for the state tournament. At the end of that season, Tyler lost a heartbreaking decision to finish one match shy of state qualification.

In his junior and senior seasons, Tyler won the SICL (South Iowa Cedar League) conference title, defeating state qualifiers in both finals. At the Van Buren tournament, he defeated Brad Close of Moravia who was ranked and undefeated at the time. Unfortunately when Close and Tyler met again at the sectional wrestling tournament, it’d be Close who won a tight match. Having lost in the semi-finals myself, I pinned future state champion Brandon Ball of Columbus for third place. After my match, I watched Tyler pin Clay Wells of Waco, who hard started off the season ranked 10th by the Predicament. I didn’t receive a wrestleback, but Tyler did.

Tyler lost to Billy Dominguez of Columbus in a match that came down to the last second. As much as it hurt me to know that my high school career was said and done, it hurt just as much to know that so was Tyler’s. What made it even harder to swallow was that at Districts, the two state qualifiers were Close and Iowa Valley’s Wade Kimm who Tyler had defeated twice that season. When you watch someone who works as hard as Tyler Rash did, who had such a good attitude, who pushed you to be your best every day, you never really accept that it didn’t work out for him. To this day, when I think about it, it still brings tears to my eyes. I wanted him to succeed as badly as I wanted it for myself.

In the end Tyler had 88 career victories. A number of those wins over state qualifiers and wrestlers ranked in the top twenty. He’s one of many wrestlers throughout the state of Iowa who had a good career, despite never making it to the state tournament.

If you ever watched a Sigourney Savage wrestling practice between 2001 and 2004, you’d probably conclude that Tyler Rash and Stephen Stonebraker hated one another. Watching him choke me out in a front headlock or watching me tork his neck in a half nelson, it’d be hard to conclude otherwise. Yet, that couldn’t be further from the truth. I had and I still have nothing but the utmost admiration and respect for Tyler Rash. He was my workout partner through four years of high school wrestling. I couldn’t have asked for anyone better.

Next post: A Fantasy Wrestling Template that We Use