THE COUGAR CLASH: Preview and Thoughts 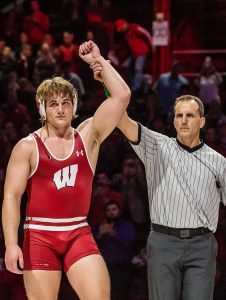 Another tournament overshadowed by the Cliff Keen Las Vegas Invitational, the Cougar Clash held by Southern Illinois-Edwardsville looks to be a good little tournament with some exciting and competitive matches.

#5 Rayvon Foley of Michigan State shouldn’t have any trouble taking the title here.  I’d like to think he’d get at least some fight out of Dack Punke of Missouri but he hasn’t been wrestling anywhere near as well as I thought he would this season. It’s hard to believe that as well as he was coming along towards the end of last season, that he currently has a losing record.

Despite suffering an upset yesterday vs #2 Austin DeSanto of Iowa, #1 Seth Gross of Wisconsin will mow through the competition. This will be nothing but conditioning for him.  His finals opponent will be #18 Alan Hart of Missouri.  Our third-fourth place match should be Little Rock’s Paul Bianchi and Michigan State’s Garrett Pepple.

Can #17 Cole Martin of Wisconsin give #2 Brock Mauller of Missouri a decent match in the finals?  I say he can. I think this match will play out better on the mat, than it does on paper.

Another good finals to look forward to with #16 Jake Tucker of Michigan State and #20 Jarrett Jacques of Missouri.  Would love to see SIUE’s Justin Ruffin in the mix as it’s always fun to see the home crowd have someone to cheer in the finals.  The likelihood however is another strong third place showing for the cougars.

As it will be for teammate Gross, this tournament will be a cake walk for #3 Evan Wick of Wisconsin.  His finals opponent most likely Drew Hughes of Michigan State.

No competition at all for #11 Connor Flynn of Missouri it seems.

The number one spot here goes to #16 Cam Caffey of Michigan State.  Who his finals opponent will be?  Looks like a battle between teammates Dylan Wisman and Canton Marriott of Missouri, although I wouldn’t count out Wisconsin’s Johnny Sebastian. All three depending on where they are placed in the bracket are capable of meeting Caffey in the finals or taking third.

As it will be for teammate Flynn, this should be a cake walk for Missouri’s Wyatt Koelling.

The highest probability for a Cougar to make the finals in #15 Colton McKiernan. Unfortunately there is little to no chance it’ll result in a championship as his finals opponent will be #2 Trent Hilger of Wisconsin.  Not even 100% that McKiernan makes the finals, especially if redshirt Zach Elam of Missouri enters the tournament.  Look for Michigan State’s Christian Rebottaro or Chase Beard (either one) to place fourth.