Yesterday, I posted an article on John Ites from Iowa Falls and in the article, I made the claim that John Ites from Iowa Falls, like Dan Sinnott of Albia, is one of the greatest wrestlers from that era to never win state. In the comments, someone brought to my attention yet another wrestler that was right in that mix that I had yet to notice. His name was Brian Forgy.

After looking into this, holy cow does he have a point! Brian Forgy had one of the most frustrating careers I’ve seen on paper. And most certainly a heartbreaking 2nd half to his postseason career. He accomplished a lot, but the line drawn between him and multiple state champs is razor thin. He deserves some major credit for how good he obviously was.

Brian Forgy made his first appearance at the state tournament in 1982. He was in the 2A 98 lb. division and had an impressive record of 23-1. He won two nice matches over Lenny Goetz of Creston and Jake Ressler of Cascade, but fell in the semis to Mark Schwab of Osage, who was en route to winning his 1st of 4 state titles. Forgy bounced back with very impressive wins over fantastic wrestlers, Grant Eckenrod of Benton, Van Horne and Don Hoffman of East Union to place 3rd. He finished the season 27-2. 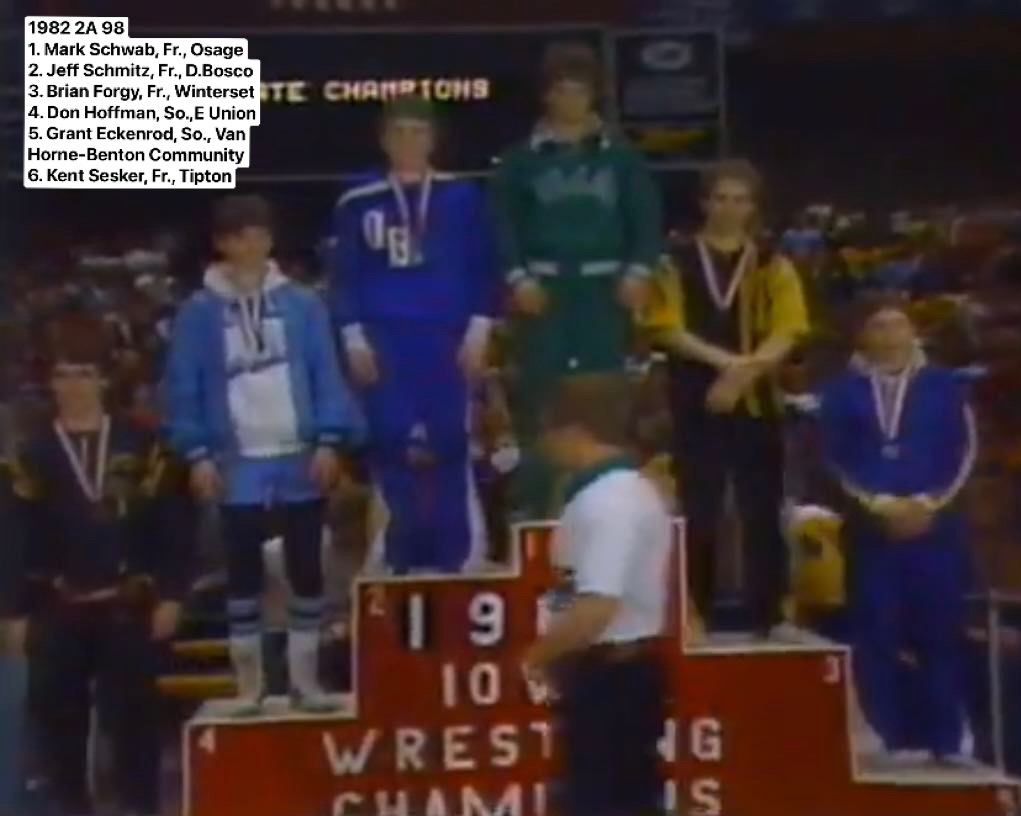 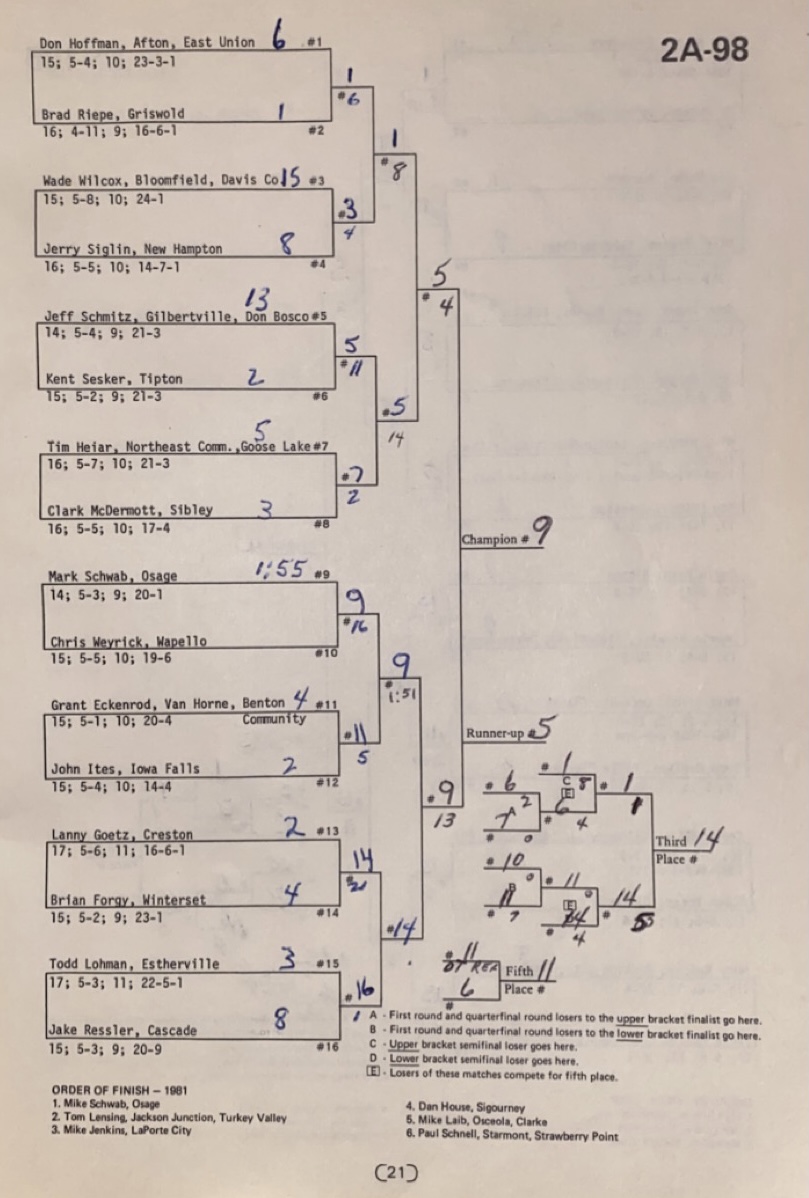 The next year, Forgy came into the state tournament with an unblemished record of 20-0. He won via injury default first round over Grant Eckenrod and then defeated Mike Stilson of Hampton to reach the semis, where again, he faced Mark Schwab of Osage. It appears Schwab won this one 9-2. Forgy bounced back to place 3rd again by defeating Lenny Goetz of Creston and Jon Anderson of Waukee to finish 3rd again. He finished the year with a season record of 24-1. His career record at this point was 51-3. 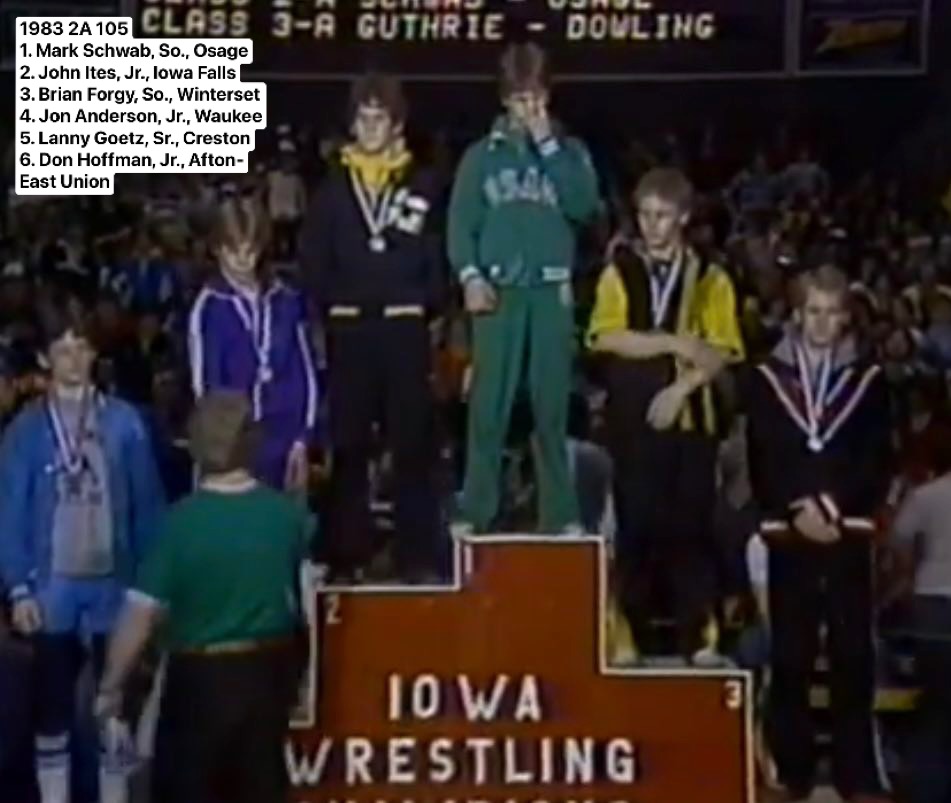 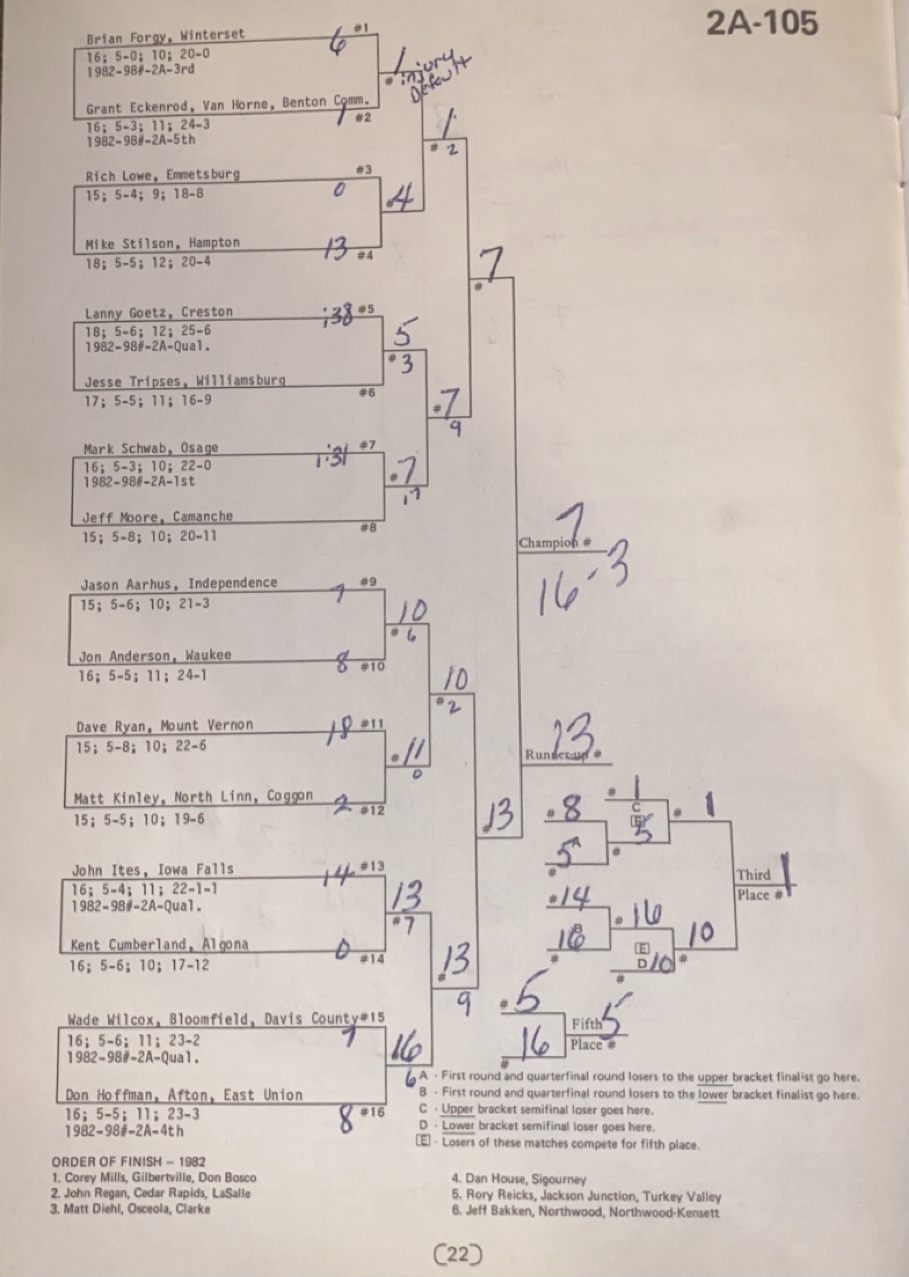 Forgy’s presumed frustration began at the state tournament his Junior year in 1984. He came into the tournament at 2A 112 with a 24-4 record and was defeated by phenom Freshman, Steve Hamilton from Emmetsburg first round by the score of 3-0. He was eliminated… did not get a chance to wrestle back. Steve Hamilton would win 2 state titles in his HS career. Forgy’s career record was 75-8 at this point. 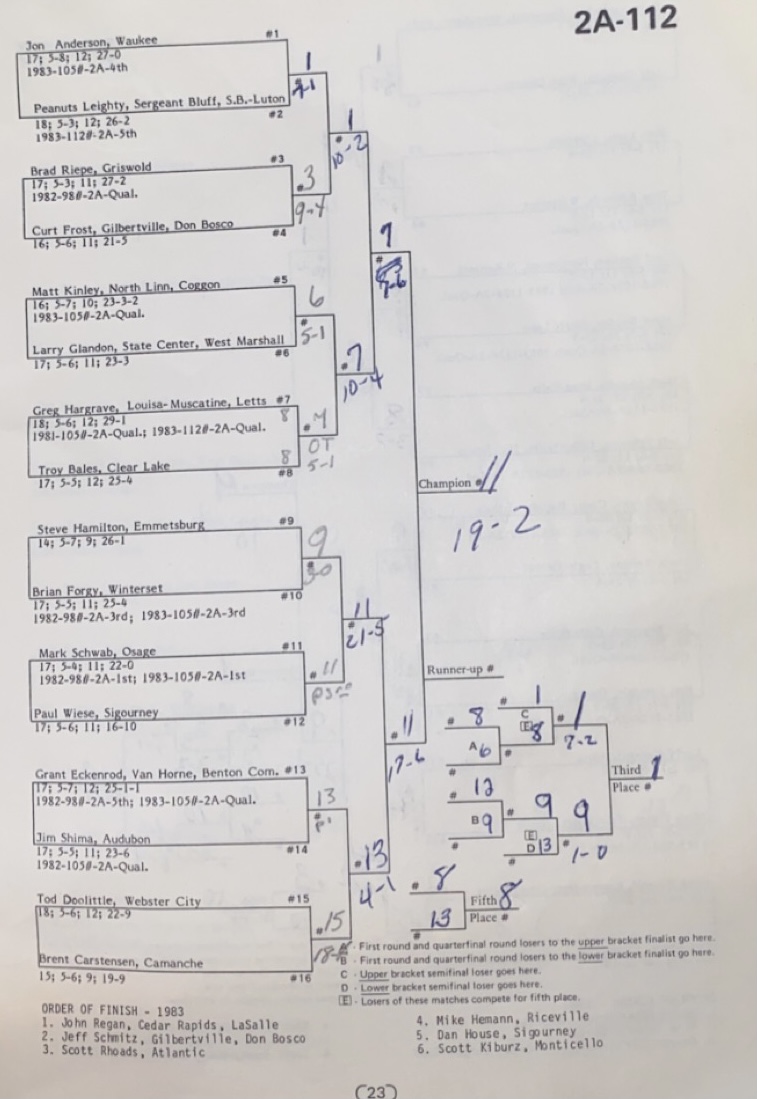 In 1985, Forgy was a Senior and came into the state tournament at 2A 119 with a sparkling 24-0 record. He was beaten first round by Darron Jones in OT. He did get a chance to wrestle back this time, but was eliminated when he lost another close match to Mike Malcom of Glenwood, 4-1… Who knows, Forgy may not have been on top of his game in that match after his dreams of becoming a state champion were shattered first round. Mark Schwab would win that bracket as well. Mark Schwab won ALL 4 of the state brackets that Forgy was in. Forgy finished that season with a 24-2 season record. 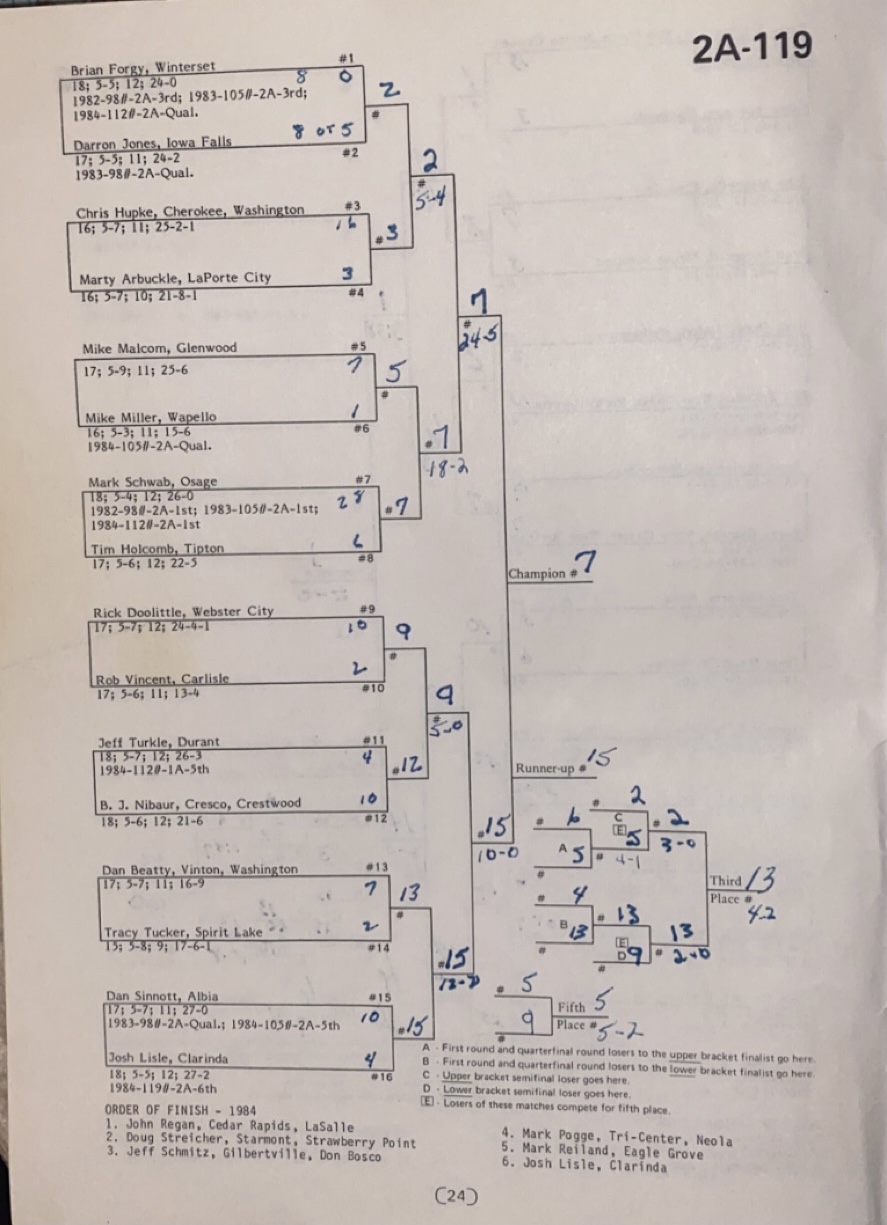 Brian Forgy finished his career as a 2X 3rd placer with a career record of 99-10. Great career, Brian! You deserve tons of respect for your accomplishments!