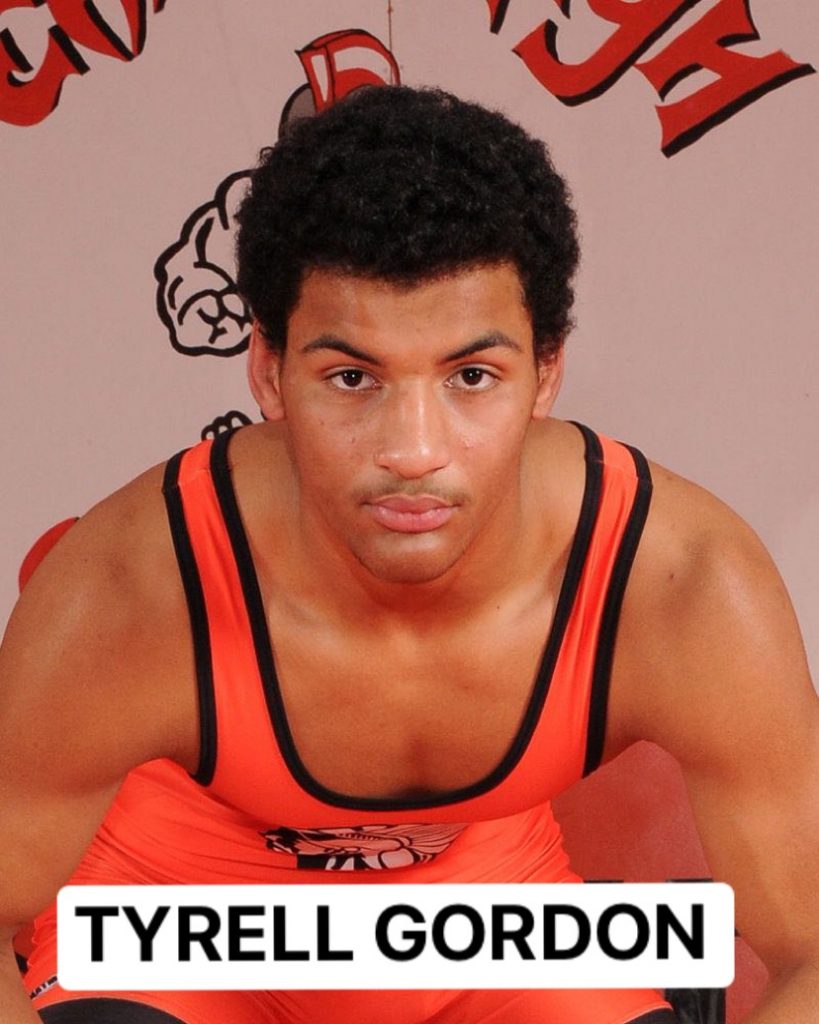 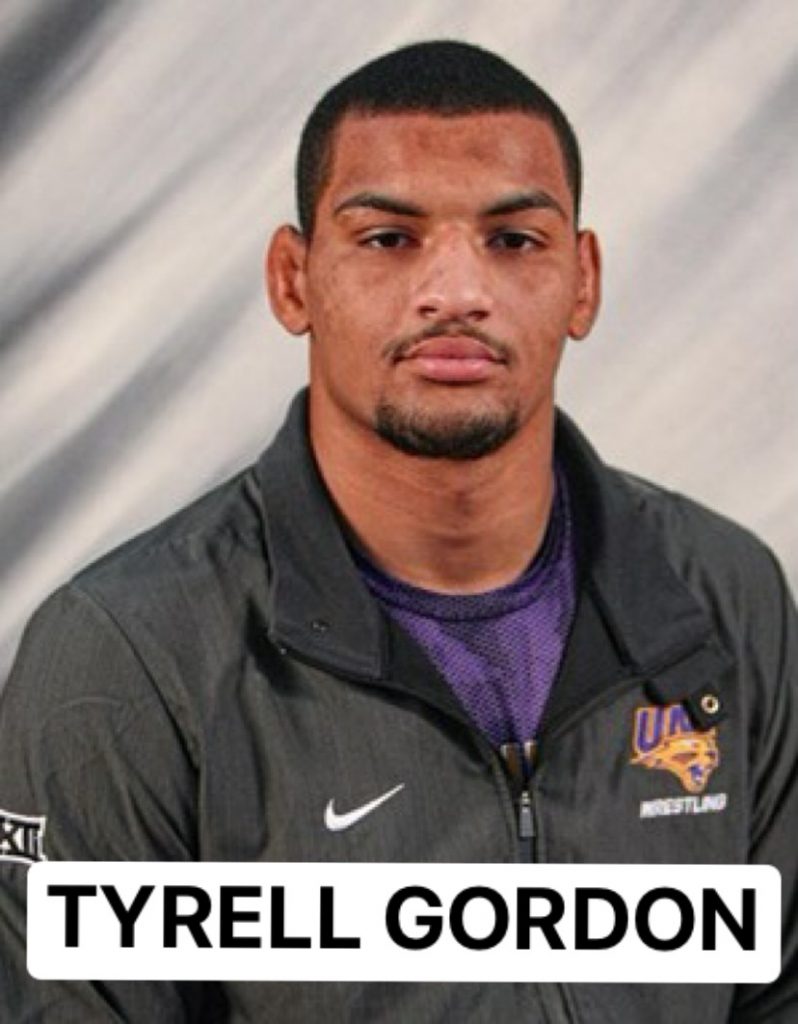 Tyrell Gordon didn’t start until later than most wrestlers do… Or at least that’s how it appears according to the past results. About the furthest back you can trace things back with him are his Junior High days and it appears that he did pretty well for his initial times being thrown into the mix with guys who had been wrestling since Kindergarten. It appeared that he qualified for USA and AAU as an 8th grader and won a match of two at both against good kids.

When Tyrell initially got into HS, he struggled and/or wrestled some JV in his first two seasons. He finished out his Sophomore season on varsity and placed 4th at districts with a season record of 25-17. And then, just like that, he took an astronomical jump between his Sophomore and Junior seasons. If I had to take a guess, there were 3 huge contributing factors which led to the jump in his development between those years: 1. He was now an upperclassman-upper-middleweight opposed to an underclassman-upper middleweight which meant he likely made up a lot of ground physically. 2. He had yet another year of experience. And 3. He heavily increased his freestyle and Greco wrestling in the summer of 2016 and never looked back. 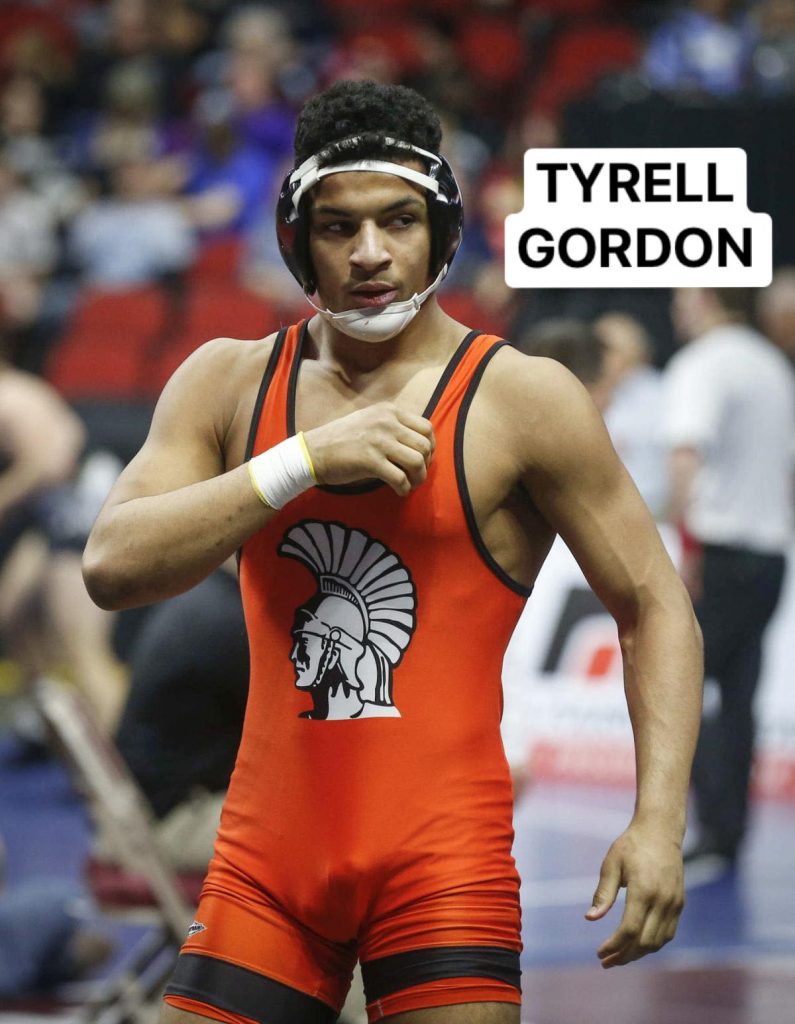 And how astronomical was the jump you may ask? Well he went from a Sophomore who went 25-17, placing 4th at districts to a Junior who finished 4th at state with a 43-6 record and picked up huge wins over quality competition all season long. He won his first of what ended up being 2 MVC Conference Championships that season as well. Tyrell Gordon had arrived and he wasn’t going away anytime soon. He hit the Freco scene hard again, placing 3rd at Freestyle State and was a Greco state champion that year. 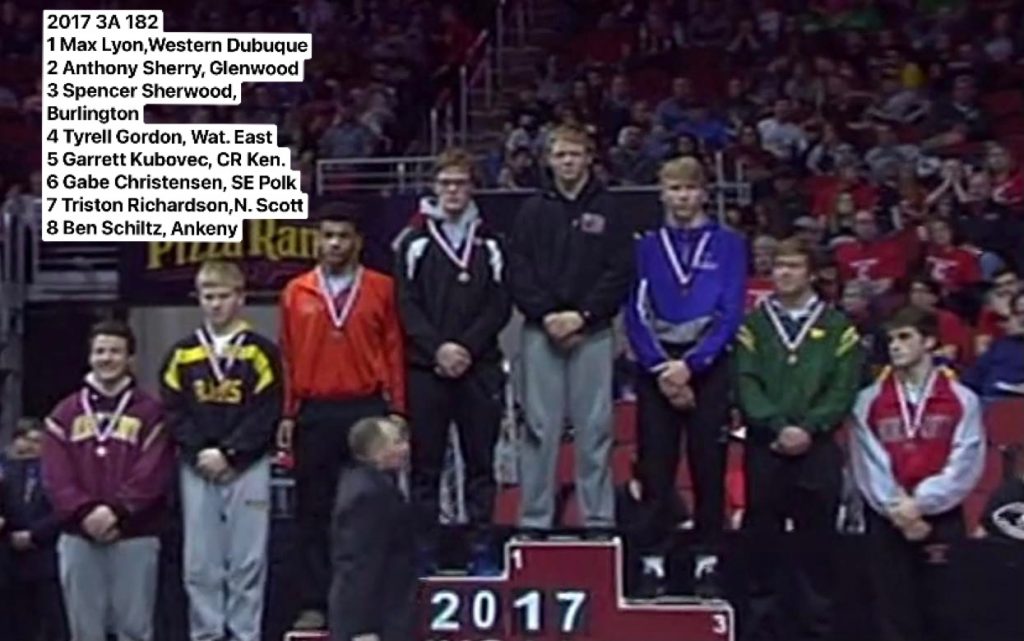 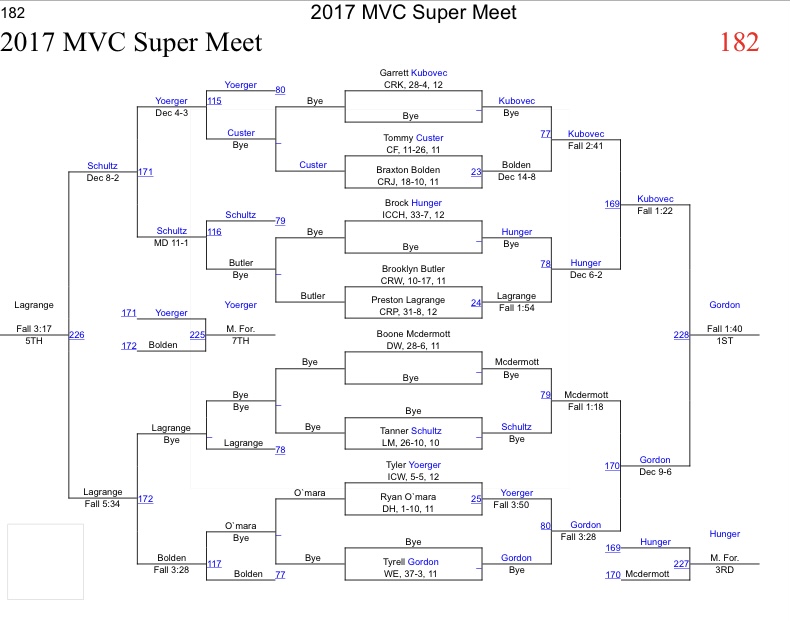 As a Senior, Tyrell continued to leave his foot on the accelerator and came into the state tournament with only 2 losses, both to Tanner Sloan from Alburnett who was steam-rolling through everyone at the time. The positive take-away from that, though was that his first loss to Sloan was at the first tournament of the season and Sloan beat him 6-0, but Tyrell closed the gap and gave him a much more competitive match the 2nd time they wrestled and he only lost by a couple points to him. Tyrell bulldozed through several eventual placers and future state champions that season. Heck, it looks like he beat future 3X state champion, Gabe Christensen of SE Polk at least 3 times his last two years of HS. Gordon won his 2nd MVC title that year and major decisioned a high quality wrestler who had done well at the state level for years to that point named Jacob Dykes of IC High. 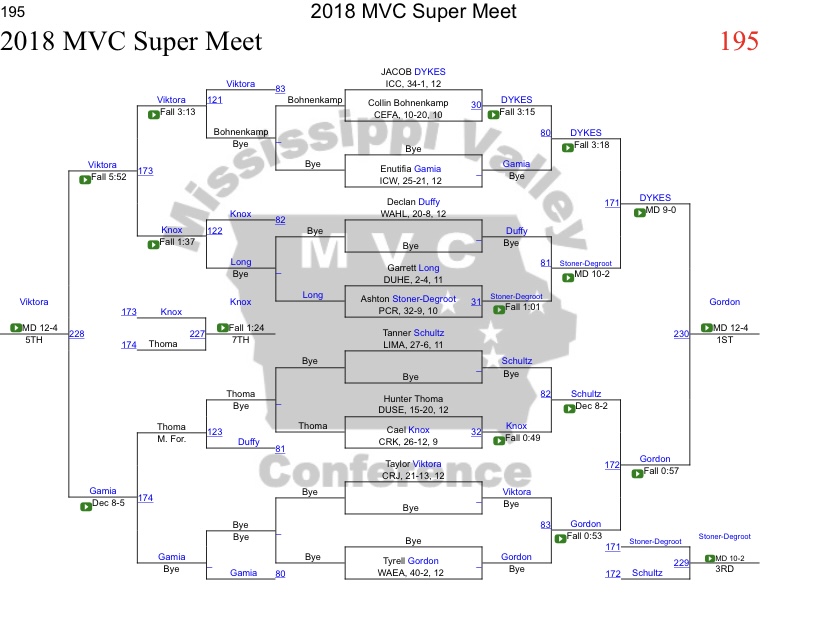 Tyrell came into the state tournament with a sparkling record of 43-2 and had two close wins over great opponents, Ashton Stoner-Degroot of CR Prairie and Christensen. This set up a rematch with his MVC finals match, Jacob Dykes of IC High, who he, as mentioned, majored a couple weeks before at the MVC. Unfortunately for Tyrell, he did not have the same result against Dykes this time, for he lost 6-4 this time, putting him in the consolation rounds, which ironically the two guys he wrestled in the consolations were the guys he beat the first two rounds. He spread the gap with Stoner-Degroot, beating him 8-0 this time and then beat Christensen in OT for 3rd place at state, making him a 2X state placer. Although 3rd was obviously not what he wanted either year and you could clearly see the disappointment on his face while standing on the podium, it was still a helluva HS career. 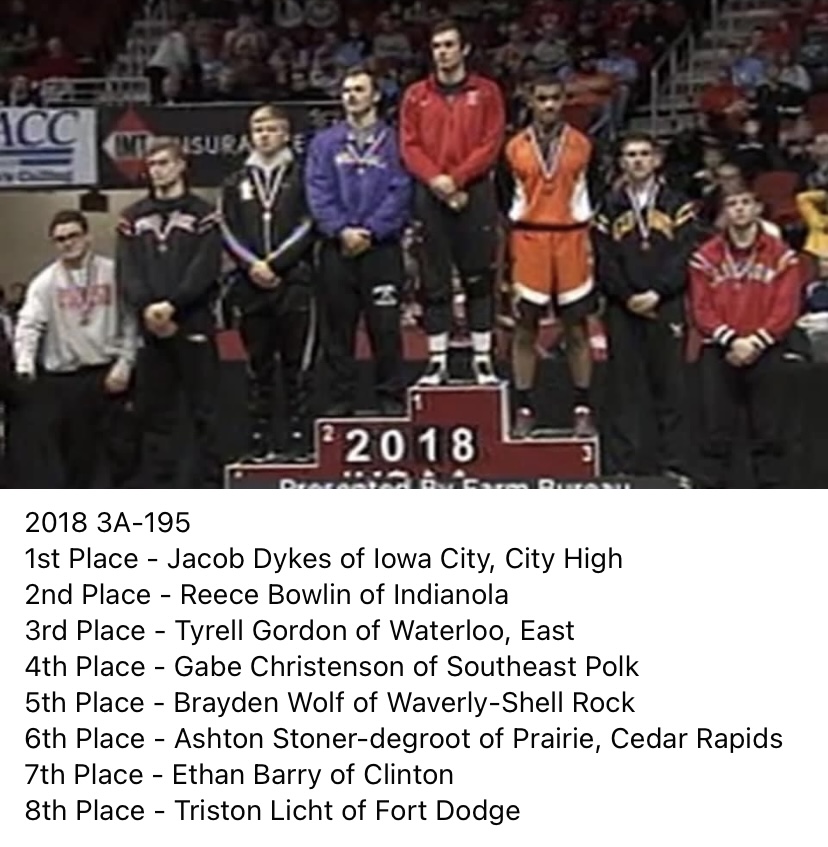 Tyrell went on to have an incredible offseason in the Freco scene. He won a couple tournaments in Freestyle and Greco. Won both Freestyle State and Greco State. Performed awesomely at Junior National Duals for Freestyle and Greco, only losing 1 out of 12 matches between the two… he ended up finishing his Freco career at the HS level as a 2X Fargo Freestyle AA and a 1X Greco AA which is better than MANY 3-4X State Champions have done there. 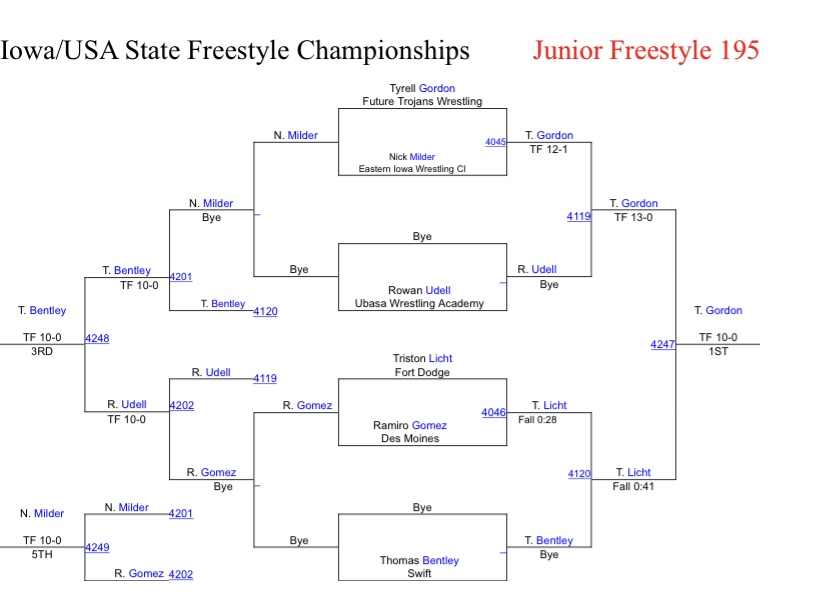 Tyrell went on to wrestle at UNI where he has had some good moments, but has taken lumps here and there which should be alarming to no one, for he has shown several times now that he’s capable of making huge jumps in his development when he puts his mind to it. He has won some nice tournaments in his collegiate career to this point. I would keep paying attention to Tyrell at this point. He’s still in this.

One thing that I read about Tyrell that brought a smile to my face is that he volunteers as a youth coach at the Future Trojans Wrestling Club. The fact that he does this as a current collegiate wrestler or just a college student in general is a great indicator of just how big his heart must be. Most college students don’t have time to be volunteering with the youth, for they are too busy with their social lives. Most collegiate athletes don’t have time either, for they have their own careers to worry about… Tyrell apparently considers it important to work with the youth and has likely changed a few lives already by doing so… and he’s managed to compete at the D1 level simultaneously…. huge props to this man… Not everyone has it in them to be so selfless. I know I didn’t.