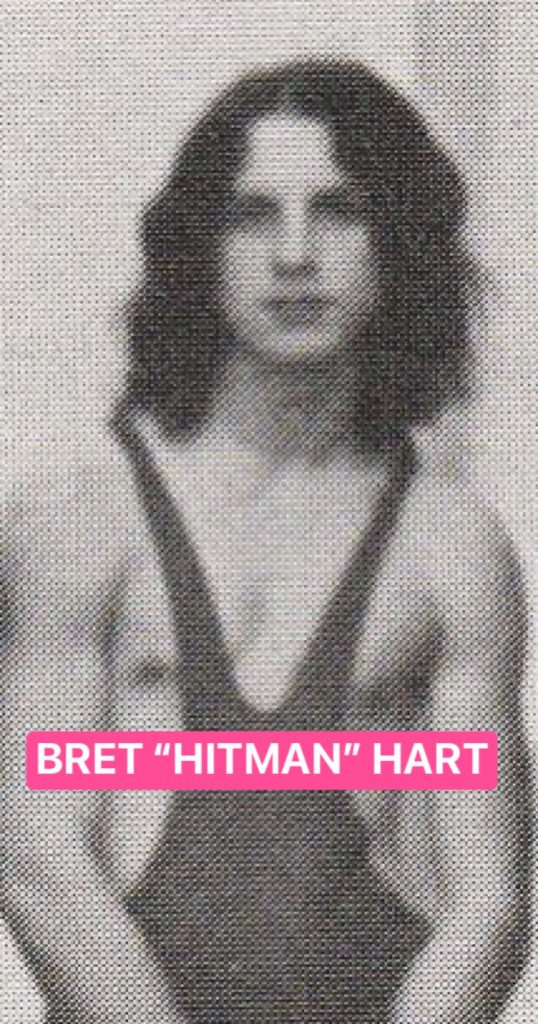 To start, there will likely be two groups of people reading this one… WWE fans and HS/College wrestling fans. To avoid confusion, I am going to refer to the WWE style as “professional wrestling,” and the HS/college style as “amateur wrestling.” 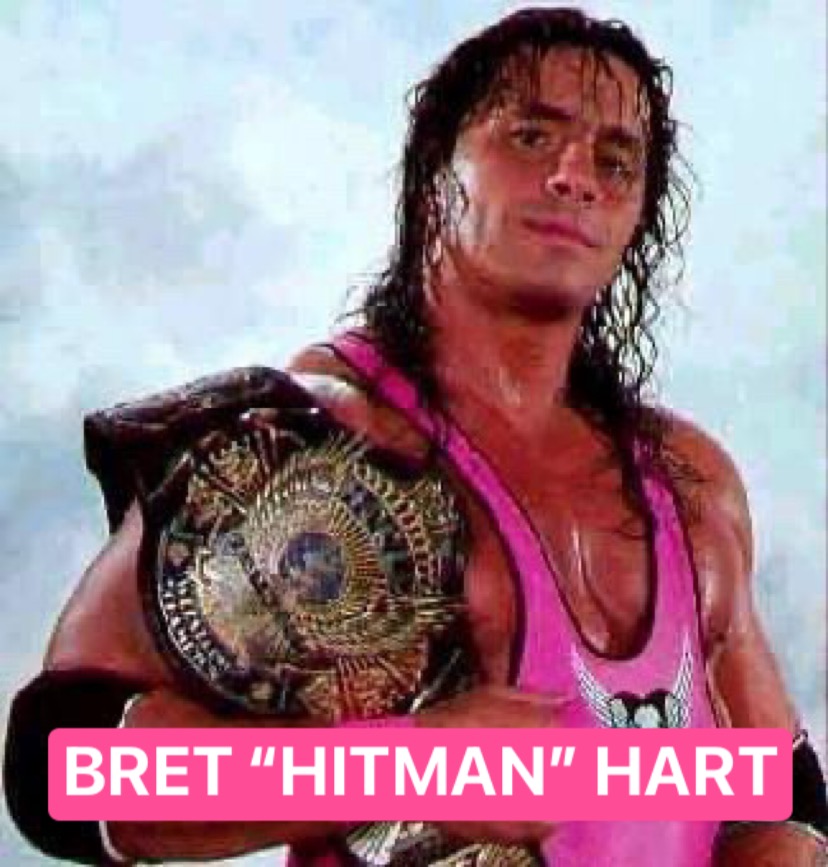 Bret “Hitman” Hart… The legendary professional wrestler. He was one of my all-time favorite athletes/celebrities of the 90’s. He was so cool.  My brother, Justin and I used to fight over which one of us got to use Bret Hart as our character on all of the WWE games we had for Sega Genesis. Back then, I hated the color pink… I thought that color was for girls and sissies, but when Bret Hart sported the pink and black, nothing looked cooler. And the fact that Bret was an amateur wrestler before he became a professional wrestler supplied him with yet another element of cool for us. To make it things yet even more coolerer, Bret was a second generation wrestler for his family. His father, Stu Hart, along with being a legend for his influence in the professional wrestling world was also a successful amateur wrestler during the 1930s and early 1940s and won many national championships in his day. Bret’s brothers also had varying degrees of success on the mat. Bret Hart stated that the reason he started wrestling to begin with at the age of 9 was because it felt like an expectation from his father to do so. Bret has referenced the moment he showed one of his initial City Championship medals to his father as one of the most powerful and life-changing moments of his life. To this day, Bret’s medals she earned while competing in wrestling are among his most prized possessions. 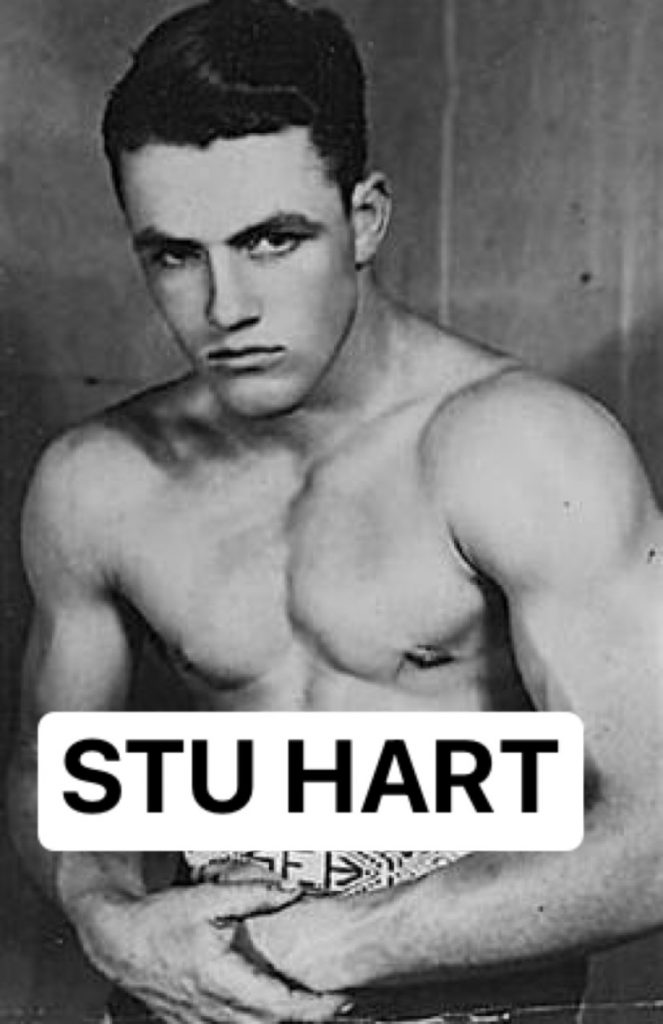 KURT ANGLE: I used to watch matches of Bret Hart so that I could learn the psychology of [pro] wrestling… in that ring, as a technician, there wasn’t anybody better than him.

You can think what you want, but I think it’s rather unlikely that a take coming from a wrestling phenom like Kurt Angle would be lacking validity.

I wonder what Kurt Angle thinks Bret’s ceiling as an amateur wrestler could be? 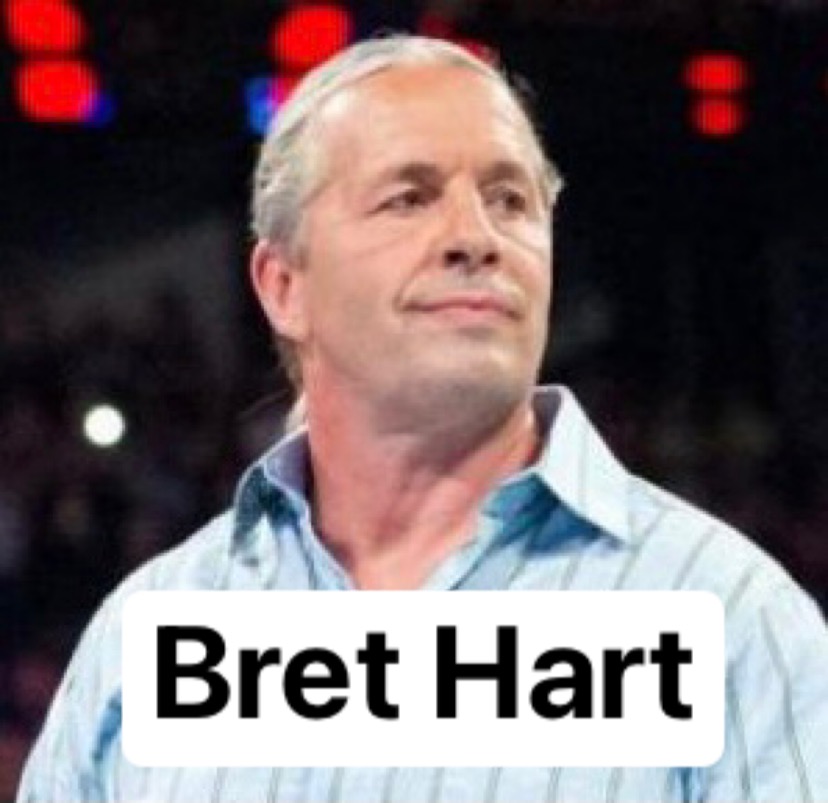 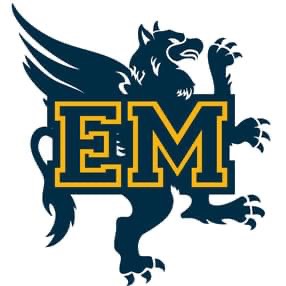 I don’t see why amateur wrestling fans wouldn’t be proud of Bret’s professional wrestling accomplishments, for his experience in amateur wrestling most certainly played a role in his ability to become the universally respected professional wrestling technician that he is, for not only was Bret an excellent professional wrestler, he was also a very successful HS and collegiate amateur wrestler. Bret attended Ernest Manning High School in Calgary, Alberta (Canada) where he was a wrestling legend. In high school, Bret won the city and provincial championships in three different weight classes: 145, 154 and 177 lbs. He won his first city championship in grade 10, following it up with a provincial title. In grade 12 he would finish second at the city championship, but redeemed himself by defeating the opponent who had defeated him, when he won his second provincial title. One of Bret’s most notable wins was over Bob Eklund of Central Memorial HS/University Of Calgary… 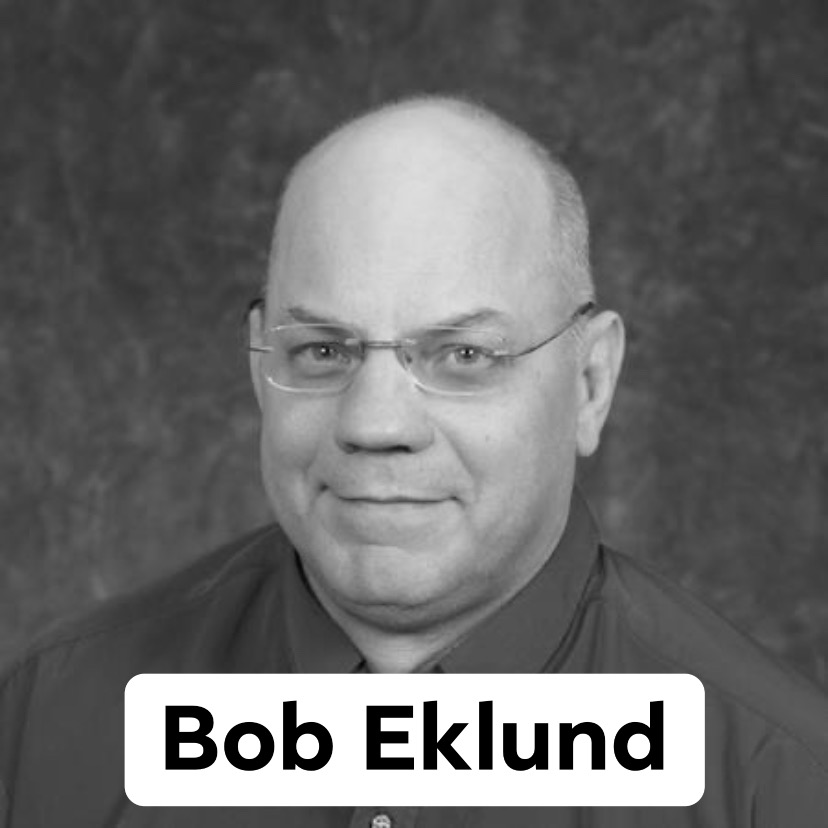 Eklund would go on to become a Canadian National Champion and was named the “Outstanding Wrestler Of The Year” in 1980-81. He’s one of the best amateur wrestlers to ever come out of Canada. 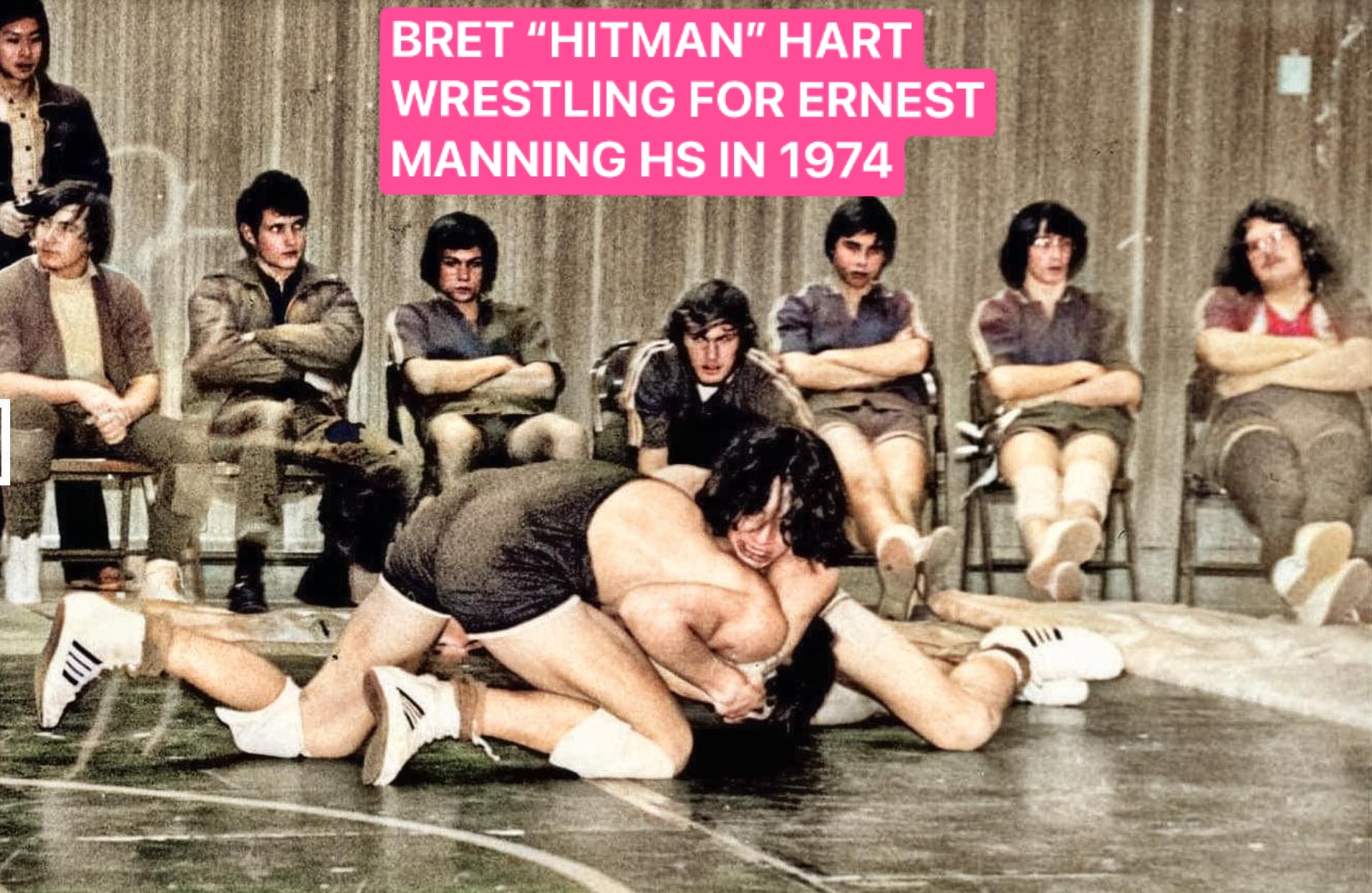 Bret went on to wrestle in college for Mount Royal College where he continued to show some legit ability to eventually become one of the best in the country.

After a couple year hiatus of training, Bret got back into the grind and wrestled Bob Eklund again at the collegiate level after Eklund had won Nationals and was beaten, but almost pinned him. He surprised even himself that he came so close to beating him, especially since he almost pulled this off without having any cardio training at the time. Bret’s talent was so obvious that there were hopes that he could eventually compete at the Common Wealth Games or even represent Canada in the Olympics. Bret eventually quit wrestling to pursue the career that made him famous…professional wrestling. He joined up with his father, Stu’s promotion, Stampede Wrestling.  We will get to the reasons that led to this decision in a bit. Since Bret’s competitive days, he has spoken of how helpful his amateur wrestling background was in his professional wrestling career, and also of what a positive effect amateur wrestling has on junior high school and high school-aged boys in terms of building self-confidence. A true advocate for our sport!

Ok, so to switch gears a little bit, how many of you amateur wrestling fans out there are fans of professional wrestling or at least respect them as being skilled athletes? How many of you hate everything about it? It seems like the amateur wrestling community is split evenly in terms of those who like it and those who hate it. I loved it back in the 90’s and 00’s when the characters seemed more entertaining and likable. For whatever reason, since that era, I just haven’t been able to get into it… I haven’t been able to get into many of the storylines or characters in years, but I will always respect what they are able to do athletically. So while many of us love or respect professional wrestling, an equally large amount of wrestling fans tend to despise it to the point where they are incapable of giving the WWE performers a mere fraction of the credit they deserve as being considered the incredible athletes they are. The primary reason the WWE-haters will give you for their disdain of professional wrestling is that they can’t wrap their heads around the fact that it is scripted or “fake,” as they may refer to it. However, I think another major underlying factor for these wrestling fans’ hatred for professional wrestling is the fact that it receives more mainstream media attention than wrestling receives, which makes the WWE athletes more popular than our athletes, which results in the successful WWE performers being paid much, much, much more money than our successful athletes, which IS very frustrating. As we all know, it takes a ton of hard work and perseverance to become successful in amateur wrestling and the rewards for the hard-earned success that an amateur wrestler may achieve is generally measured in “pride” and “honor” opposed to something that can help you on your quest for financial stability. This is why we lose some of our best amateur wrestlers like Kurt Angle and Brock Lesnar to professional wrestling. No one understands this more than Bret Hart himself. He endured this exact type of frustration when he was a collegiate wrestler and it was a factor in his decision to drop out of college and pursue a career in professional wrestling. He was so focused on his collegiate wrestling career that his grades struggled as a result. And when you factor in the wear and tear that wrestling can take on a person’s body as well as the agony of weight-cutting, you can’t blame someone for finding the sport of wrestling to be unrewarding. Here is what Bret Hart had to say about that particular phase of his life:

BRET HART: I focused more on wrestling and the college championships than I did on schoolwork. I was discouraged and spending my money and I remember I just quit after one semester and said, ‘I’ll get more money and do the whole plan again, but this time it will be better organized.

Ok, so with that said, Bret Hart, if you happen to be reading this article, one of my biggest longterm goals of this site is to help promote and grow the sport of wrestling to where our athletes can have the same career opportunities as professional athletes in other sports. If this is something you would like to promote as well, I would like to ask you to partake in a series we have called “Remember The Wrestler,” which will consist of a set of questions that chronicles your own wrestling journey, how wrestling has impacted your life and your thoughts on what we can do to grow the sport in terms of popularity and mainstream appeal. Would be a cool way to not only tell the world about your amateur wrestling journey, but it’d also give you an opportunity to showcase your commendable writing skills. If you are interested in doing this, please email me at thepindoctors@gmail.com Thank you very much for your ongoing support and encouragement of the sport of wrestling. Apologies in advance if I got any of the facts wrong in this article.