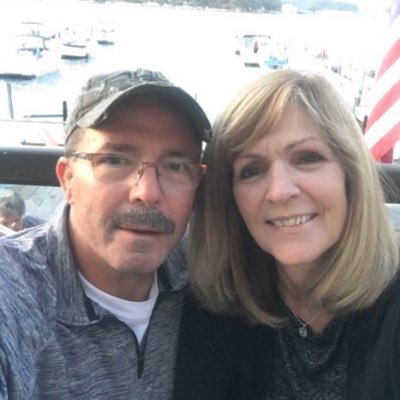 At Mediapolis, like any other wrestling program, we have wrestlers who are considered legends of the school/wrestling program. Generally speaking these are the state champs or high placers. 3X state champ, Ryan Cummings is a big one you still hear about today. My brother Justin is held in high regard. Drew Foster and my brother Brennan are likely at that level after Drew’s D1 and Brennan’s NAIA success. State champion, Micah Keller has a fan club. Cole and Luke Erickson, Adam Drain, Steven Holloway, etc. However, out of all of the wrestlers who have achieved “legendary” status in the Mediapolis wrestling room, there is one name who has stuck out for decades as being the ultimate “pioneer” of elite Mediapolis wrestlers. His name is Miles Erickson and he earned this status by becoming Mepo’s first ever state champion in 1981. There has been a picture of Miles on the top of the podium in the concourse or nearby at the school since I was a little kid. He is the one who got everything more or less started at Mepo when it came to collecting hardware at the same tournament. He’s remembered by Mepo wrestlers to this day. An incredibly well-respected person in the Mediapolis wrestling community. And it didn’t just fall into his lap… He endured some tough losses prior to his Senior year state tournament and none were more notable than a loss he took in the state finals as a Junior to a man named Rick Ruebel from Grundy Center.

I have seen the podium picture that has Rick Ruebel on top with Miles Erickson on the #2 spot since I can remember and with Miles being the hero to heroes at Mepo, Rick Ruebel naturally gave off a very “Cobra Kai” vibe when we’d look at that picture…since he beat “OUR” guy. Rick might as well have been “Biff” from Back To The Future as far as we were concerned, since he defeated our Miles. And in a funny turn of events, I actually got to meet Rick on Twitter semi-recently and guess what he’s like?!?! Haha, he’s seriously one of the nicest, enthusiastic and most complimentary people I have ever encountered since starting the site. An awesome guy. I feel better about doing what I do with this site after every time I talk to him. I never would have guessed that he was like this when I was growing up and I am happy I got to meet him and am able to put together his wrestling story for everyone! 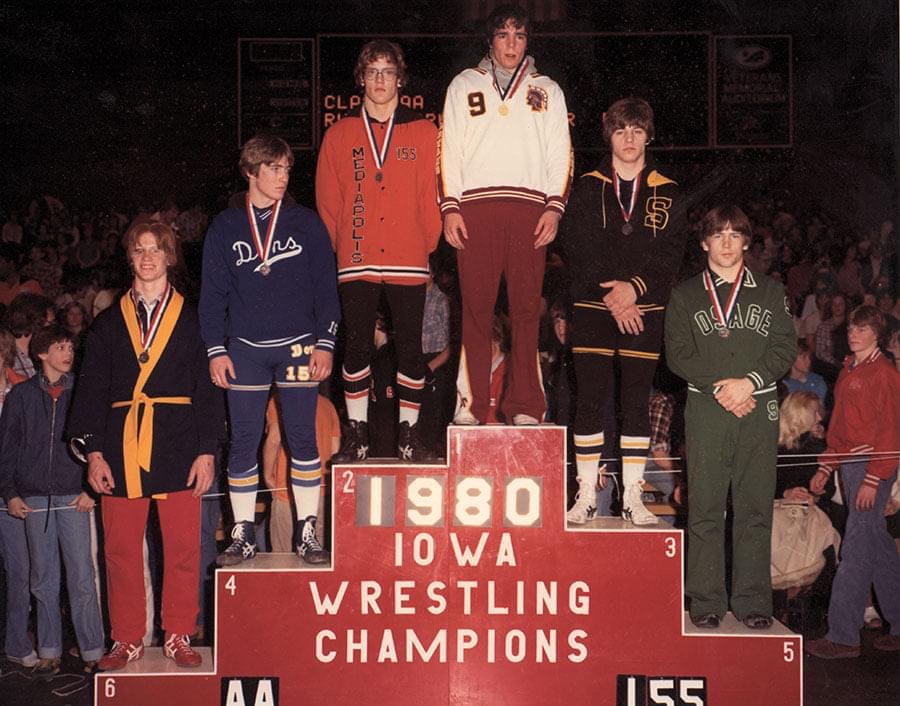 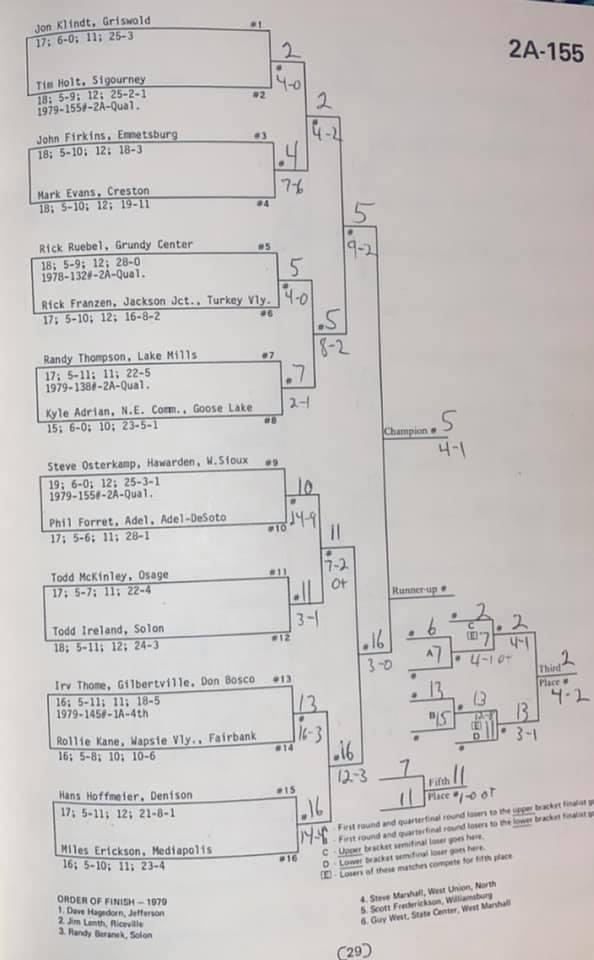 What clubs, schools, etc. did you wrestle for?
GRUNDY CENTER
What year did you graduate?
1980
Who or what encouraged you to give wrestling a try?
DOUG VAN GELDER, HE RAN THE YOUTH PROGRAM
Do you have any family who wrestled or wrestles currently? Parents, children, brothers, etc.? How did they do?
NO
What were your youth results? Any rivals there?
WE WRESTLED AT A LOT OF LITTLE KID TOURNAMENTS, RIVALS BECAME FRIENDS.
What was your record in HS?
72-13
How did you place at state every year?
QUAL. 1978, STATE CHAMPION 1980
What were some of the most notable adverse challenges or moments you experienced in wrestling and how did it turn out?
I HAD SEVERAL INJURIES THAT LIMITED ME.
How would you describe your wrestling style?
BASIC WITH A LITTLE FUNK.
How many teams in high school did you go back and forth with or exchange wins with?
SEVERAL, WE SAW DON BOSCO, HUDSON DIKE ELDORA A FEW TIMES EACH YEAR.
Who was your most influential coach?
CLINT YOUNG
Was your team competitive in HS/college?
YES GRUNDY CENTER HAD A REPUTATION OF BEING GOOD IN NE IOWA
Who was your most influential wrestler that you looked up to growing up?
DAN GABLE, LEE KEMP,
Who would you consider the GOAT Iowa HS wrestler?
TOUGH CALL THERE ARE SEVERAL,
Who are some Iowa HS wrestling guys from your era that you have an immense amount of respect for?
BARRY DAVIS, JIM ZALESKY
Who are your favorite current wrestlers?
NO NICHOLS
What music would you listen to back in the wrestling days?
AEROSMITH, STYX, REO SPEEDWAGON.
What was the most upset you ever felt after a loss?
LOST TO AL FROST 1979, HE WENT ON TO BE STATE CHAMPION.
If you could go back and change one thing about your wrestling career, what would it be?
FOCUS ON GOALS, (JR YEAR)
What was your best wrestling memory or accomplishment?
WINNING A MATCH ON IPTV; DRAKE VS MINNESOTA.
Who were some of your most notable competitors in high school? College?
AL FROST, KYLE HASKINS, IRV THOME.
Did you wrestle all year or was it seasonal for you?
WE HAD A SECTION OF WRESTLING MAT AT OUR HOUSE WE WOULD ROLL IT OUT IN THE YARD TWICE A WEEK IN THE SUMMER.
How would the guys from your day stack up against the guys today?
I THINK WE WOULD DO VERY WELL.
Did you wrestle after high school?
YES, AT DRAKE AND UNI.
What other sports did you play?
CROSS COUNTRY
What are your hobbies other than wrestling?
HUNTING, FISHING.
How has wrestling shaped you as a person to this day?
STILL ENJOY WORKING OUT, TRY TO STAY IN SHAPE, HARD WORK PAYS OFF.
What do you do now?
SOON TO BE RETIRED FROM TEACHING 36 YEARS
Are you still involved with wrestling?
AS A FAN. I WATCH FROM THE SIDELINES HERE AT W-SR. CALDWELL AND WHITCOME HAVE A GOOD THING GOING.
Any advice for upcoming wrestlers?
WORK HARD BELIEVE IN YOURSELF.
Any chance we see you wrestle again at an Old Timer’s tournament?
NOT AFTER TWO SHOULDER SURGERIES AND A HIP REPLACEMENT.
Would you like to give a shout out to anyone you wrestled with, against, coached, etc.?
YES AND NO, I WILL JUST LET IT GO.
Do you have anything to add? Funny/interesting stories? Trivia? Etc
WHILE WRESTLING FOR DRAKE, WE WERE IN NORMAN, OKLAHOMA AT THE OU OPEN TOURNAMENT AND BETWEEN SESSIONS DAVE SCHULTZ CAME UP TO BE AND SAID HE HAD WATCHED MY LAST MATCH. HE THEN PROCEEDED TO SHOW ME SOME THINGS I COULD DO TO IMPROVE FROM THE TOP POSITION WHILE WORKING FOR NEAR FALL. IT WAS ONE OF THE COOLEST THINGS EVER.