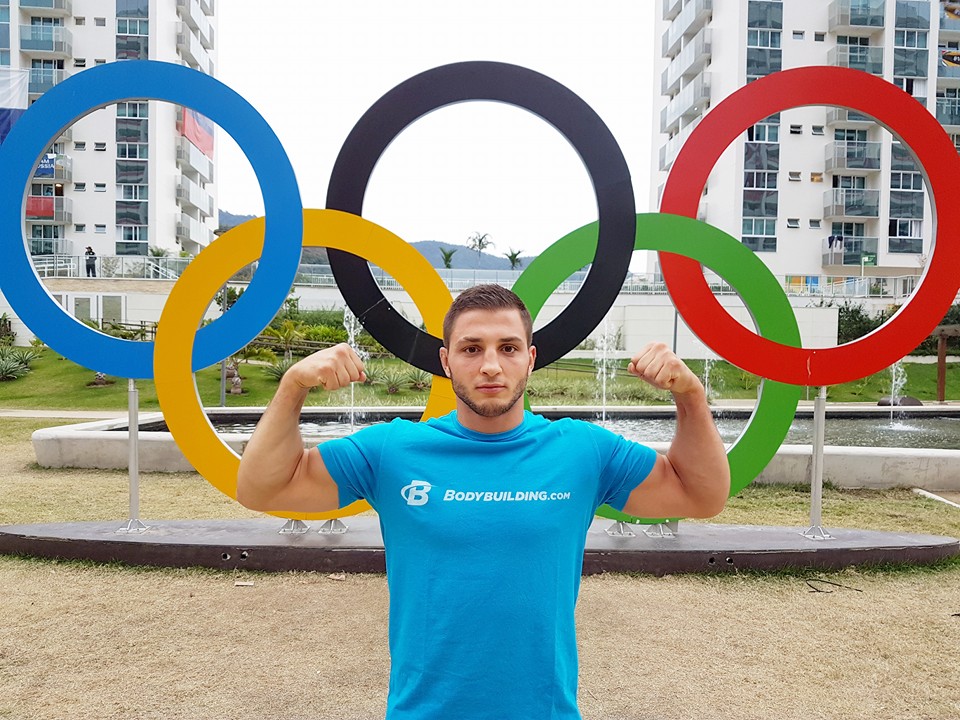 To start, Georgi is a former Olympian from Bulgaria who moved to the United States and started something incredibly unique in the wrestling community.  He and his father facilitate a wrestling club called “The Best Wrestler,” which promotes balance and diversification of a wrestler’s skillset by means of implementing elements of wrestling technique, preparation, etc. from multiple cultures/countries.  The Best Wrestler: http://thebestwrestler.com

I first became aware of Georgi when I watched an episode of wrestling podcast, Hager’s Happy Hour a couple months ago.  He called into the show when a man named Willie Saylor was the guest. Mr. Saylor yelled something like, “we have an Olympian on the show!”  This caught my attention. Georgi discussed some of his thoughts on wrestling and what his vision is in terms of growing it on a worldwide scale. I really liked what he was saying.  He then discussed his wrestling club, “The Best Wrestler,” and I thought it was brilliant… To reiterate from the first paragraph, it is a sociologically aware approach that implements factors of various wrestling tactics and strategy from multiple wrestling cultures/countries.  Right up my alley. I am big on emphasizing the importance of multi-cultural perspectives in anything that is important to me and someone like Georgi presents perfect and valuable opportunities for someone to expand their knowledge of the sport.  I feel in order to make your wrestling game as efficient as possible, you need to have a fairly large amount of versatility and open-mindedness to styles/approaches to the sport that may not be consistent with the wrestling atmosphere you were raised in.  This approach to wrestling is 100% consistent with what Georgi stands for.

Georgi concluded his call to Hager’s Happy Hour by expressing his gratitude to the hosts for them taking the time to listen to him and help him in his ongoing mission to promote the sport. He was genuinely thankful for all of the support the individuals on that podcast had given him in his mission.  I was very impressed with him and could tell that he cared deeply about everything he mentioned to the hosts/guest.  I had to reach out to him. I’m all about “wrestlers supporting wrestlers” and felt urge to do my part in terms of helping Georgi spread his valuable message.  I’m glad I did, for I feel like we all could learn so much from him in regards to wrestling and life in general.

Here is some advice to upcoming wrestlers: If you are a person who takes wrestling seriously and claim to be willing to do anything in your power to improve your skillset, when you encounter a wrestler like Georgi who competed at the high level he did and in a different country, try to talk to them about wrestling and listen to everything they have to say! You are doing yourself a disservice if you fail to do this, for I guarantee they will have a ton of unique advice for you that you may have never heard before, for every country with wrestling has their unique way of approaching the sport.  Take these opportunities ANY TIME you get the opportunity, for the opportunities may be scarce and the potential attainable knowledge to accumulate from them could be limitless.

What styles of wrestling have you competed in? Which are your favorites?

Answer: Freestyle, Greco, and Folkstyle. Freestyle is my favorite.

Answer: Yes, my father wrestled in Bulgaria. He was a 5 x Bulgarian National Champion.

Is wrestling popular in Bulgaria?

Answer: Yes, it is very popular and it has a rich history in the sport.

How are the wrestling cultures of Bulgaria and the USA alike?

Answer: They are quite different. Bulgaria has Sports Schools – for athletes specifically and the students focus on one sport primarily. Training is also different… A lot more time spent on developing technique and kids will have up to 9 practices per week.

How are the wrestling cultures of Bulgaria and the USA different?

Answer: Kids do not pay to be in a club in Bulgaria… which is good for the kids, but bad for the development of the sport. They have a lot fewer tournaments and a lot more training time.

Answer: Yes, absolutely. I believe a nice balance of it all would be great. Which, actually that is exactly what my father and I are doing at our club in Iowa… The Best Wrestler.

Please tell me about your wrestling club. What is your coaching philosophy? Is it something anyone can attend?

Answer: We consider ourselves the only full-time club around and we are results driven. My father has produced 7 Olympians and over 20 world team members so far in his coaching career. We have 6 practices per week and 2 morning workouts, for a total of 8 practices per week. Of course, we have our part-time options as well where kids can train anywhere from 1-8 workouts per week. We have a 100% ratio of full-time members going to college on a scholarship.

Answer: In Bulgaria you can’t compete until you are in 5th grade, so there was a lot of training with no competition. I won my first Bulgarian national title when I was a freshman in HS.

What is your record?

Answer: Honestly, I have no idea. Who keeps track of that 🙂

What are your thoughts on folk style wrestling?

Answer: Again, pros and cons. I don’t love it, but I didn’t grow up training folkstyle either. I believe that it teaches you to keep wrestling and it improves conditioning. I also believe that it allows for sloppier wrestling and it is a lot more forgiving of mistakes made during the match. Freestyle and Greco force you to master cleaner finishes. If the NCAA were to be Freestyle and Greco… the US would undoubtedly be the best country in the world.

Answer: I had just become a 3 x National Champ in Bulgaria and I experienced a major injury in my lower back. My club coach at the time kicked me off the club because apparently I was a liability and wasn’t worth much to him since I can’t wrestle. 5 Months later I won my 4th National title for another club. Then, shortly after that I came to the US.

How many guys did you go back and forth with or exchange wins with?

Answer: Honestly, I don’t remember. Probably my biggest back and forth rivalry was with RJ Pena from Oregon State back in my college days.

Who would you consider the GOAT wrestler?

Answer: It was amazing and once-in-a-lifetime for me.

Answer: Not that I am aware of. I would say I have a hybrid style of wrestling.

Answer: Great question. Jordan Burroughs vs Buvaisar Saitiev would be a great one.

Who are some wrestling guys from your era that you have an immense amount of respect for?

Answer: I can’t pinpoint one. I appreciate technical wrestlers. You know the ones… they make scoring seem effortless.

What music do you like to listen to? What are some cool Bulgarian songs I should download?

Answer: I don’t really listen to much of Bulgarian music. I listen to Tropical House Music and Chill Music.

Answer: All of the loses. I hate losing, but I always try to learn from them.

Answer: Nothing. I left it all on the mat.

Answer: Placing 2nd at the World Olympic Qualifier in Mongolia.

How do you think guys in past eras could match up with the guys today?

Answer: Wrestling has evolved a lot. I don’t believe they would do well. Just go and watch an old wrestling match and compare it with todays wrestlers… huge difference in my opinion.

Answer: Soccer for a few months. I’ve wrestled since I was 3.

Do you like American Football? If so, who are your favorite teams? If not, why?

Answer: I am indifferent. I would watch every once in awhile but I am not a huge fan of a given team. Maybe because I’ve never actually played it.

Are you able to notice variations of American culture and wrestling based on where you are geographically? How would you compare and contrast some of these?

Answer: I am not sure I understand this question clearly so I will pass it.

Answer: Honestly… I am such a bad sports fan. I don’t follow much. 🙂

Answer: I like to golf and spend time with my family.

Answer: It’s the best. It’s very fulfilling to see the change and impact you can have on kids.

Answer: I owe it all to wrestling. All of the success, on and off the mat, is because of the values I learned from wrestling.

Answer: I am the Executive Director for Nebraska USA Wrestling. I am the owner of Top Tier Performance (GRIT – ttpnutrition.com). I am the owner of The Best Wrestler (Club and the Lightest Weigh-in Singlet in the world… Feather Singlet – thebestwrestler.com). I am a partner in a team management software called ZUPTU – Zuptu.com)

Answer: Focus on progress and find a reason for WHY you are in the sport in the first place. The WHY will drive you to keep pushing and progress will encourage you.

Any chance we see you wrestle again some time soon?

Answer: Maybe… we can always have some fun wrestling in the Masters Division 🙂

What’s the most exciting wrestling atmosphere you’ve ever experienced?

Answer: The NCAA’s. In Mongolia and the Olympics.

Is there potential for wrestling to become appealing to the masses to the point where a pro league can be formed? What can we do to contribute to this?

Answer: Absolutely… Promote and Market the athletes. Create a storyline and tell the athletes unique stories. Obviously there is much more to go into this, but I believe we are headed in the right direction.