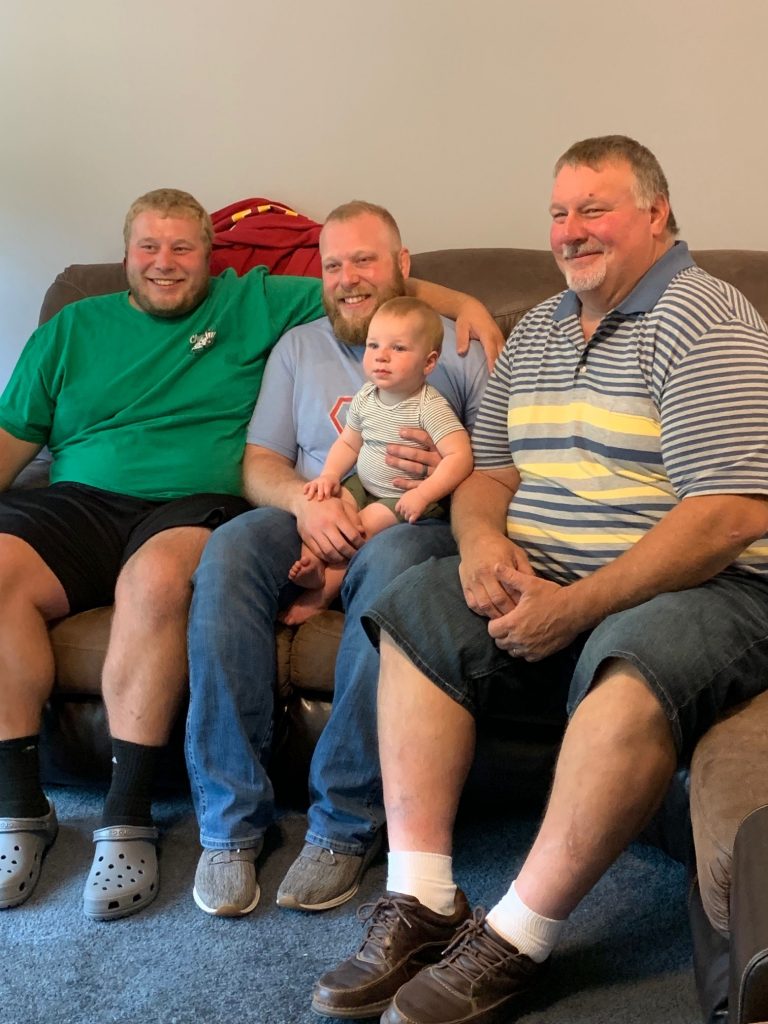 The Schweer’s are a HELLUVA wrestling family in Iowa.  I had heard of them for years, but never met one until I was in a group text with the fantasy wrestling league that I was part of… Lee’s nephew, Ben was in it and he was fun as hell to have in there.  When it was time to convert the 1985 State Finals matches, my attention was fully sparked when I heard the announcer mention Lee Schweer’s name, for I assumed this was the badass uncle of Ben’s that I had heard about. I didn’t expect to see one of the biggest rip-jobs I’ve ever witnessed in a wrestling match in my entire life.

Lee wrestled Dan Stephani from Northwood-Kensett in the finals…a 2X state champion Super HWT.  The official in this match made one of the worst calls I’ve ever seen. At the end of the match, he did not award Lee a takedown that he HAD and it directly affected the outcome, for Lee was trailing by 1 point at the time and if Lee would have been awarded the 2 point takedown, he would have won the match by one point, for there were only a few seconds left on the clock.  Instead, they were called out of bounds and had to restart on their feet with a few measly seconds left, in which Lee almost took Stephani down again, but couldn’t quite secure his hips on time.  It was a terrible way to lose a match.  No disrespect intended to Danny Stephani…He was a phenomenal Hwt. in that era, one of the best and by all accounts, was an incredibly nice person, but I just felt Lee Schweer was on the receiving end of a terrible call in their Senior year state finals match.

I mean, come on… you make the call… In what universe is this not a takedown?!?!

Lee Schweer was not standing on top of the podium at the conclusion of the 1985 Iowa HS State Tournament, but he was the state champion of that bracket in my eyes and I doubt very many people will disagree with that statement.  A popular and very good philosophy in wrestling is that you should alleviate all doubt when wrestling, so the outcome can not be decided by the official.  Well, I thought he alleviated ALL doubt in this one…That was a takedown 100 times out of 100 and he just happened to be unlucky enough that the official of that match scored a ranking of 0 out of 1,000,000 in terms of wrestling officiating competence.  I would have a hard time getting over this one, if I were Lee.

And man was he good. 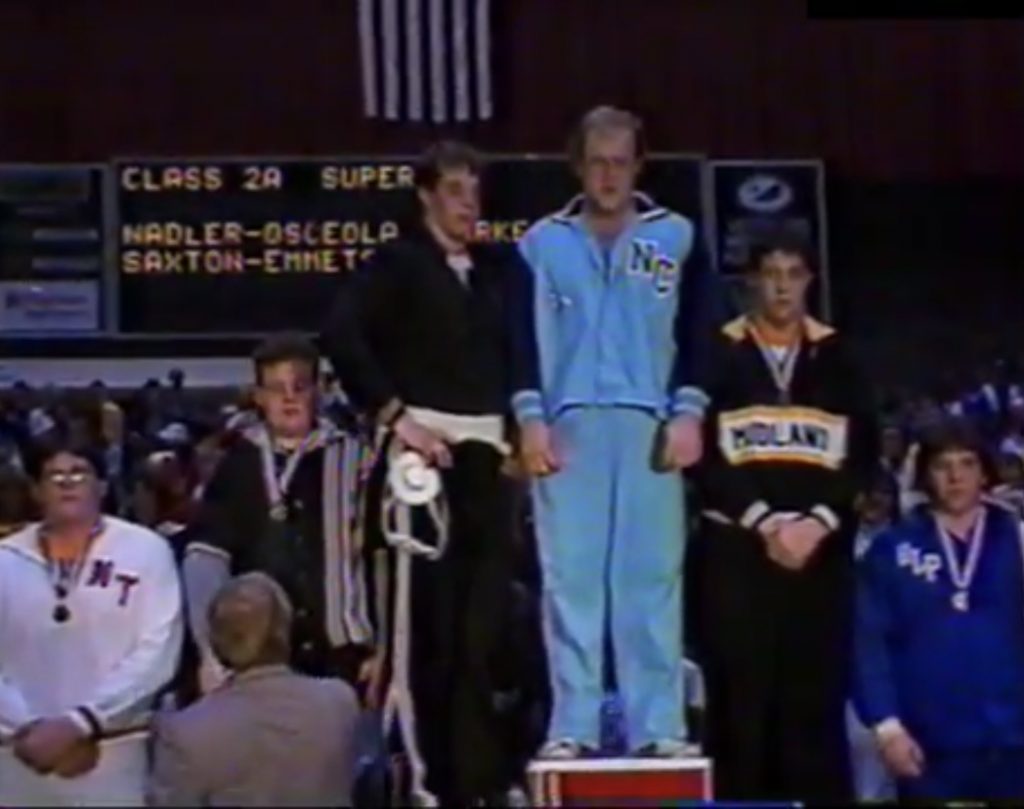 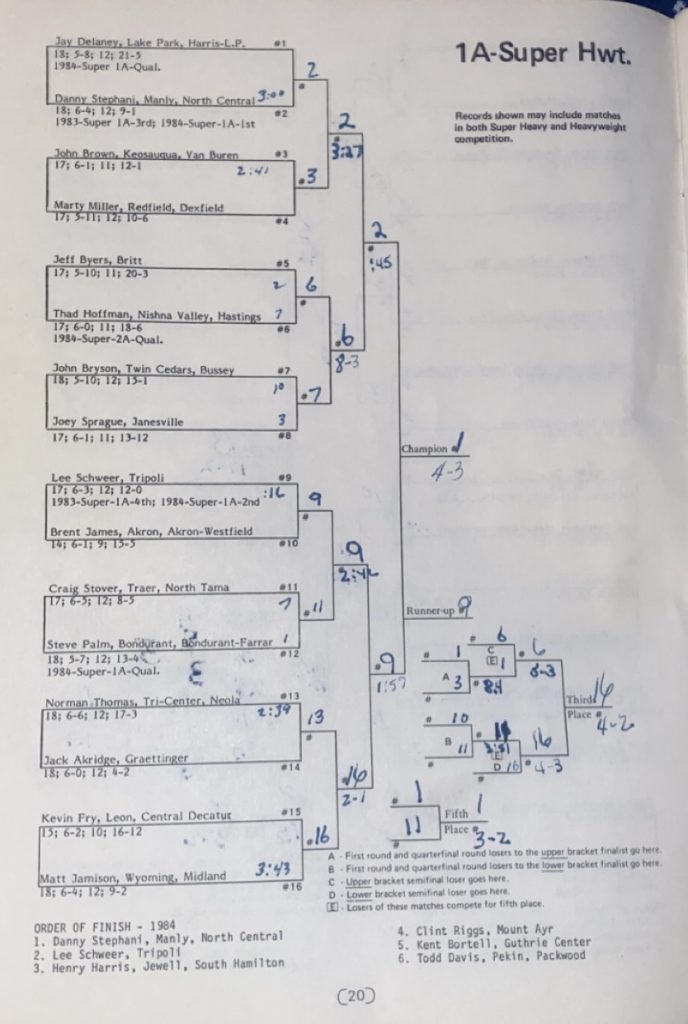 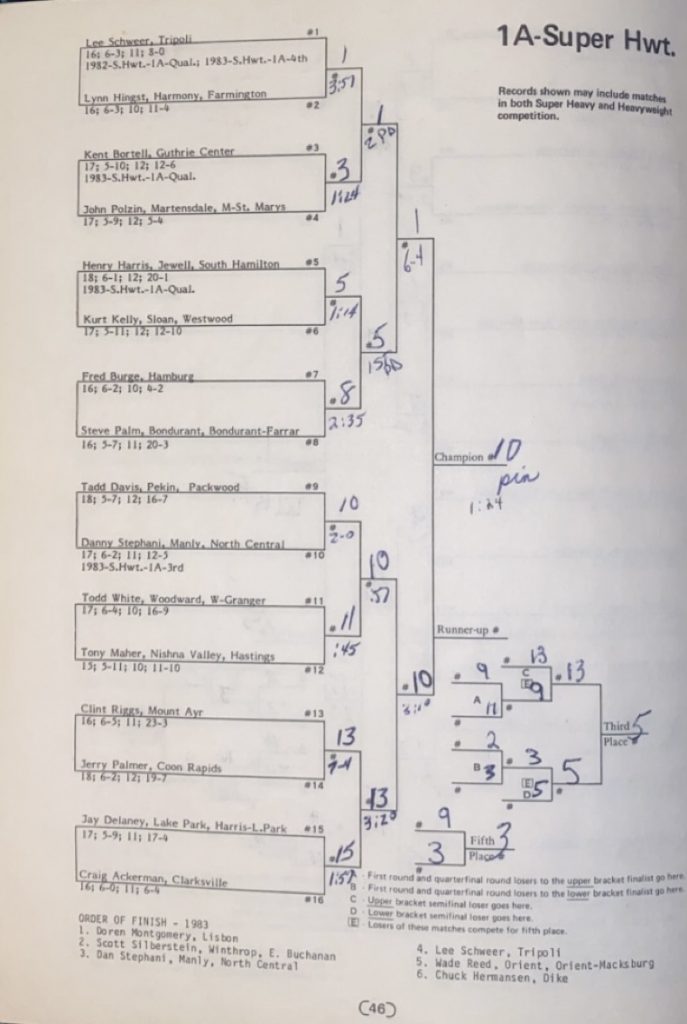 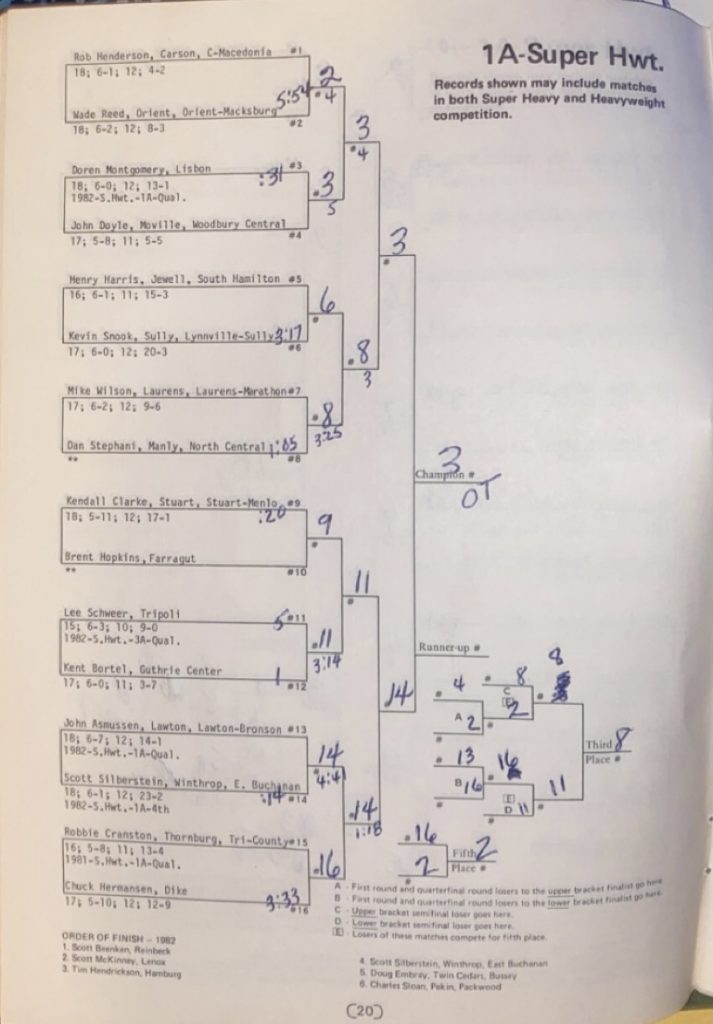 I got started because I had 2 brothers that wrestled.

We didn’t do a lot of youth wrestling back then.

Qualified as a Freshman, 4th as a Sophomore, 2nd as a Junior/Senior.

Mainly Dan Stephani. I won districts, he won at the state finals.

I will just be honest, I felt you were ripped off in your Senior state finals match about as badly as I’ve ever seen anyone ripped off before.  I consider you to be a state champion. If I were to tell you that I felt you deserved that gold medal, would you disagree with me?

No. I worked hard to try to accomplish my goal of winning state that year.  It just didn’t work out that way.

Rich Greenlee of Waverly-Shell Rock and Watt Vering of Janesville.

Definitely after the state finals my Senior year. That was a long drive home.

Just going out there and being able to compete in high school, I’d say. Also watching my sons wrestle and being competitive themselves.

The club scene wasn’t as big back then. It was just seasonal for me.

I think we could hold our own.  The technique has gotten good, but we were hard-nosed and tough and they wouldn’t stop the matches for ya if you felt hurt. We were physical.

I didn’t play other sports.

It feels good and it’s always neat to see young ones starting up in the sport and doing well.

We were taught that it takes hard work to be successful and it was true. The guys who were successful, put in the work and I think that applies to many areas of life.

My brother and I own a repair business. I also farm.

No, but I was when my sons were wrestling.

It takes hard work to be successful and anymore, it seems like you need to do it year round to succeed.

Nope. I got the heart, just don’t got the knees for it anymore.