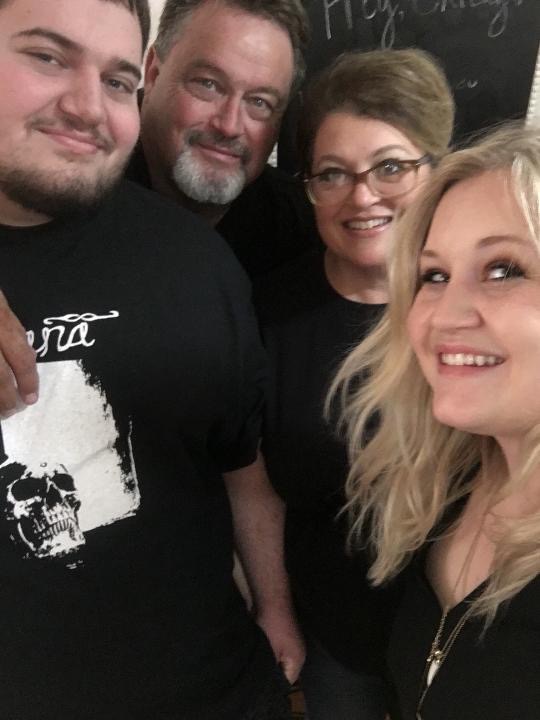 We are getting to a point where a lot of the wrestlers you will read about, I haven’t met. In Todd’s case, I watched his finals match, loved it and just sent a random inquiry to him asking to do one of these. And to think I used to be shy as a little kid! Ha. With that said, for future reference, if there is no intro for one of these articles, that’s what is going on. It means I am bugging people I don’t even know for these articles! Cool thing about Todd is that we have some mutual acquaintances. Most notably the Andrews brothers and Ressler brothers from Cascade. I knew them from wrestling at Loras College. Great families and Tim Andrews was one of my main practice partners for a couple years there.

My older brother Tom got me started in wrestling so my other 4 brothers would not kill me. They did not wrestle.

He (Tom) wrestled 118 in high school and college and used to use me as his practice dummy.

I started wrestling in 2nd grade and did not lose a match until I was in high school.

I qualified for state as a Junior and was State Champ as a Senior at Hwt.

I missed most of my freshman year due to an illness. I was way behind on mat time and learning new technique. I told my parents I needed to stay late at school to catch up on my homework, but went to wrestling practice instead making up for lost time.

I lost my first round match at State my Junior year and had to watch the rest of the tournament in the stands. I realized I had to add a few things to obtain my goals.

Aggressive – Always moved forward to get the first takedown. I had 3 matches my senior year where I did not pin my opponent.

– I remember wrestling Ed Huff from Sheldon who beat me in Freestyle, but I beat him at a folkstyle tournament 2 weeks later. He was fun to wrestle. I wrestled Jeff Baxter from Storm Lake who was very tough.

Kerry Feekes was my high school coach and was a great teacher. Dirk Cowan who placed 2nd at 155 at State in 1983 was my most influential coach. . He spent a lot of 1 on 1 time with me during and after practice after I returned that year. I always give him the credit for my success.

We never lost a dual meet during my 4 years. We placed 8th at State my senior year.

Randy Lewis(Lewboo) was my guy during the IPTV days. I would try and emulate his great throws.

How nice of a feeling was it when you put your state finals opponent to his back right away and pinned him?

It was a huge relief. My Dad was never able to watch me wrestle until the State Tournament. He had a medical issue where he produced to many red blood cells. We were told he could have a heart attack if his blood pressure got to high so I knew I had to pin my opponents as fast a possible. Feekes asked me what I was going to do before the match and I told him that I was going to pin him quick so my Dad would be ok. I asked him to look at my Dad and see what color his skin was and Feekes said, “very red.” So he told me to get it done . Everyone thinks I put my finger up after the match to say I was number one but I was pointing at my Dad to make sure he was ok.

I’ve heard you have some Ray Brinzer stories… can we hear some?

No Comment. He was the smartest person I have ever had a discussion with.

Aiden Noonan is my favorite high school wrestler- I love the Bull and Big Cass at Iowa.

My Junior year loss at State. I was mad for 364 days because I wrestled terrible. I stuck that article about my loss on my bedroom wall and looked at the article every day for 1 year.

– Wish we wrestled in dual meet tournaments. Would have loved to wrestle 50 times in a year.

Best Memory was coaching Tyler Yonkavic when he won his State Title at Hwt for Maquoketa Valley. He was my first State Champion.

We wrestled Emmetsburg in practice before Districts every year. I loved wrestling Dave Saxton and Tim Leuer. It was fun to be tested by them as they were great wrestlers.

Did you wrestle all year or was it seasonal for you.

We have some hammers from my day. I would take the state qualifiers in 2a from 1987 against any era.

I blew out my elbow at an open meet in Chicago and that ended my career berore it started.

What are your favorite sports team?

The Hawkeyes, Cubs and the Dallas Cowboys.

Fishing- Golf and shooting my guns.

What were some of your biggest wins in HS? College?

My State Finals match was the biggest for me as I obtained my goal of being the 1st Wrestling State Champ at my school.

Coaching is the most rewarding thing I have ever done other than being a Dad. I always wanted to pay it forward in wrestling- I have coached at Cascade and Maquoketa Valley and have enjoyed every second of it.

It has made be a much better person and strive to make a impact on my wrestlers beyond High School.

I am a claims adjuster with Progressive Insurance I do not know FLO.

I slowed down over the last 3 years due to health reasons, but am looking to get back into wrestling again. My wife always says it is my addiction.

Be coachable, work hard and make sure you are having fun.

Not anymore. Too many surgeries.

I want to thank Dale Andrews for starting me in coaching 20 plus years ago. Like to that,Tom and Travis Andrews for keeping my life interesting. Also would like to thank Alex Ressler who will never give up his fishing holes. One more for Tim (Andrews)- How bout them Cowboys-

I was coaching at State and we had a tough official and were not getting any calls. He had his back to me and I may or may not have said something inappropriate. The official turned around and I immediately looked at our other coach and told him not talk to the official that way. He was reprimanded by the official as I was laughing at him.