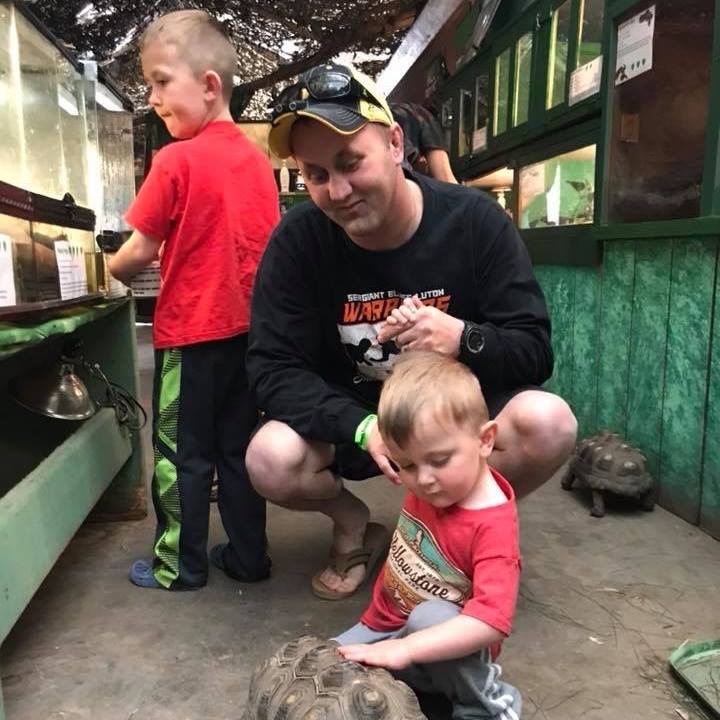 I always run into Aaron Helmrich at the most random places. I ran into him in Cedar Rapids one night when my friends and I stopped at a gas station prior to a NIN/Queens of the Stone Age concert once. I ran into him once at Pancheros in Iowa City a couple years after that. Last time I saw him was a year or two ago. I was a groomsman in my friend, Gotch’s wedding and he was there, for he was family of the bride. Every…single…time I see him, he remembers me immediately, which is always pretty cool for me, for it’s come at times in my life where I was feeling pretty forgettable. And he doesn’t get me mixed up with my brother like many do, despite the fact that he actually went on a wrestling trip to Orlando in which he and my brother were teammates.  You ever run into someone and start talking to them and you can tell that they are genuinely happy to see you, not just going through the motions? Helmrich comes off that way to me. Always happy to run into me and even happier to start discussing wrestling. I talked to him for a good hour or so last time I saw him at the wedding reception… I don’t think the topic of conversation strayed from wrestling at all. And he definitely knows his stuff. Past and present, he seems to remember everything. I don’t know Aaron THAT well, but what little interaction I have had with him, he has always come off as a very good  person to me. Is equally friendly to everyone. That was actually one of the first things I heard about him, from my brother. He thought Aaron was the nicest guy on their Orlando team. And that’s the vibe I have gotten from him every time I have been around him. Good dude… As I type this, I haven’t read his questionnaire yet, but I am excited to learn about his journey.

My older Brothers Rick and Justin found a flyer when I was in kindergarten about a Sunday wrestling practice and that was all she wrote.

I have 2 older brothers. Rick never qualified, but he has been officiating for the past 10 years has been selected to officiate at state the last few years and really enjoys it. My brother Justin was a 2x qualifier and helps out with North Linn little kid program. Our oldest son Gable 8 years old won state in Colorado in 2019.  He has been wrestling for 4 years now. Our daughter, Zadie is 6 Years old and son Gracin is 4 years old and they just started going to practice this year.

Youth results? There were none, really. I went to state my eight grade year. I wrestled Rhino Cox of Wapsie Valley and Adam Schulte from West Delaware.  I don’t know about rivals, but those were guys who pushed me to be better.

I was in a car accident my senior year on Jan 4th, 2001 and was told by the doctor I should probably not wrestle for the rest of the season and that wasn’t an option… I was on the mat 2 days later with a brace.

Larry Henderson coached my from elementary all the way until my state finals match, I really enjoyed all the North Linn Coaches, Chris Anderson knew how to get wrestler ready for big matches,  Doug Leclere was just the hard working coach in the room.  Brad Bridgewater was there my senior year and is a very knowledgeable coach.

Did you have fun at the Orlando trip you guys went on in HS?

I enjoyed hanging out with some of the best wrestlers from the state on the Orlando trip and showing our talent as a state against other state top guys. 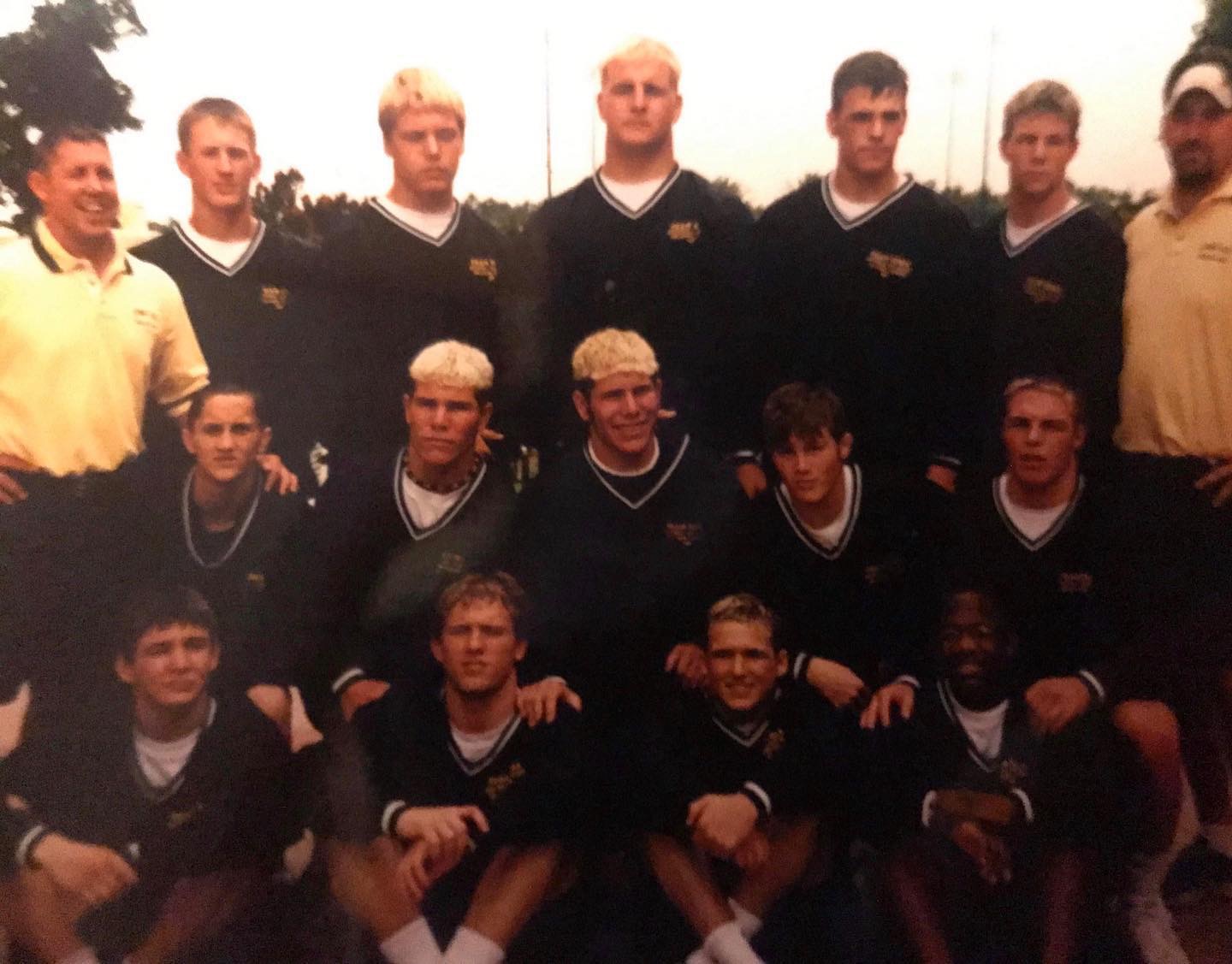 My sophomore year I went 0-2 at state I lost 4-1 and 4-3 and I thought I could have done more and that pushed me during my Junior summer.  Or my junior year I lost to Joe Honts in the Marion championship match 1-0, I was upset that he didn’t get stalling call.

Winning state, I would say that feeling never leaves and every Saturday night that im at state that feeling comes back. Or when I pinned Ray Blake at the Iowa All-Star meet vs. the National Dream Team. He was ranked 5th in the nation at the time.

I wrestled Tom Gorman like 10 times in high school. He was just a funky wrestler but all 10 matches went my way.

Looking back I would say Senior year 2nd round at state when I beat Justin Bohlke 4-3 he pushed everything I had out of me that match.

Seasonal in elementary and all year once I got into High School.

I went to Ellsworth CC to wrestle and 9-11 happened and I stopped wrestling and joined the Army.  I felt that where I needed to be.

I would say leverage and controlled wrestling.  I was 5-10, 112 pounds as a Senior and stood a good 4-5 inches over most of my competitors.  Also, I enjoyed pinning people for I ended my career with 98 pins of my 132 wins.

I had Nathan Broghammer who placed 3rd at 145  and Kyle Burkle who placed 2nd at 132  and won state and we wrestled a lot of coaches as well. I also had my older brothers to practice with at home to go over moves with whenever they were free.

Iowa Hawkeyes and all Chicago teams in pro except the White Sox.

I enjoy fishing/hunting on my time off.

Well, wrestling takes a lot of hard work and determination and so does the US Army.  If I hadn’t wrestled, I don’t know if I would still be in the Army, but here I am and I have enjoyed it for the last 18 years.

I currently am still in the US Army as A 19D Cavalry Scout at Fort Carson, Colorado. I’m at 18 Years of service and will be retiring soon and moving back to Iowa. I have deployed 6 times now: Iraq 3 times, once to Afghanistan, once to Germany and once to Saudi Arabia.. I earned my Purple Heart when I got wounded in Combat in 2011 in Afghanistan.

I love wrestling history.  There were guys I looked up to who inspired me to wrestle and I learned to love the sport through them and that whats keeps me involved.

Since joining the Army I have coached 2 years in Kentucky,  helped with 2 different clubs here in Colorado and I’m currently at Fountain Fort Carson with their little kids program, helping coach our 2 sons and 1 daughter.  I also coached 3 years at Sergeant Bluff and still talk with those coaches as much as possible.

Offseason wrestling and weight lifting was what helped me make the jump to the top of the podium my Senior year. So make sure to that. Also, spend time with your families and your parents/grandparents while you can, for they are the ones who take you to every Saturday meet while you are growing up.

There was one here in Colorado.  I would have wrestled in it, but I just had foot surgery.  I will wrestle at Corn Cob after I retire. So yeah, Old Timers tournaments… I’m game, just let me know when and where.

A whole bunch to many to name but the Iowa national team guys for Orlando, The Iowa all star team.  You guys were the hardest working guys I know.

Thank you guys for doing this it has brought a lot of memories. From guys I watch wrestle when I was young to guys who wrestled in our era. I have one funny story after the Iowa all-star meet 4 wrestlers plus Myself pilled into my little car and drove to swisher to the dance hall one of the wrestlers was Steve Mocco and if you know how big he was it was funny to see him cram into the front seat of my Bonville. 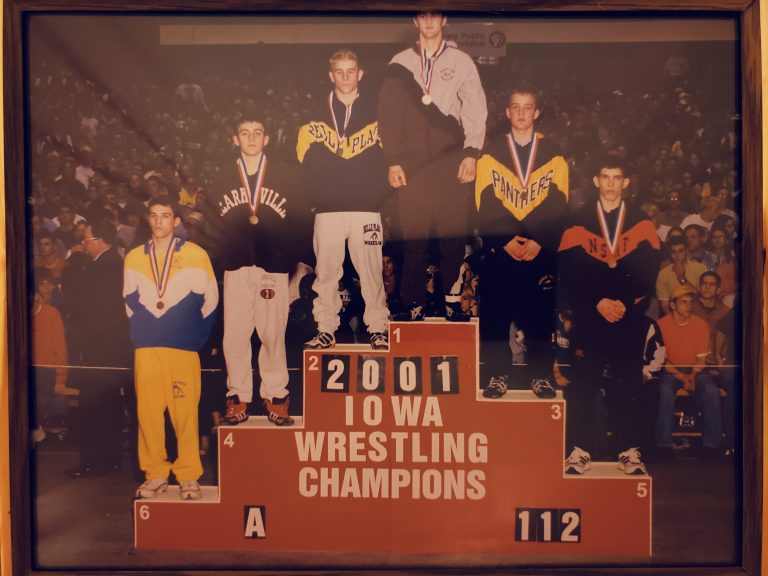 Next post: Morning Sun Wrestling: The End of An Era Part 1 of 4, The Intro (Wrestlers, Coaches, Memories, Etc.)