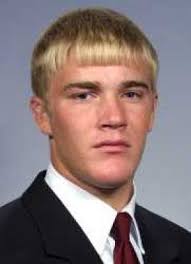 All 4 of us Swafford brothers had guys who were more or less, “rivals” of ours.  In youth, my main rivals were Shea Stamp of Lisbon (boy was he good…such a cool guy too), Anthony Briberiesco (Bettendorf) and the biggest one was probably Matt Vasey of DM Lincoln. He and I met at state 5 times and he hated my guts. I can post some funny clips of him expressing his hatred for me on the mat. In HS, my future teammate, Ryan Hagerty of Muscatine and Summer practice partner, Adam Reid of Fort Madison were probably my most notable rivalries…Matt Davis from Dubuque Senior and I used to go to war during the offseason as well. Justin’s first rival ever was probably Henry Wahle of Underwood, then a kid named Blake Jacobi from Belle Plaine (RIP), Derek Webb from SEP and then it became a straight up constant Mack Reiter-Justin Swafford clash for a couple years and it lasted until they were Seniors at Freestyle State Duals.  Justin also had interesting rivalries with Andre Avila (Assumption), Jacob Naig (Emmetsburg), CJ Ettelson (Hudson), Ryan Morningstar (Lisbon) and the wars that Justin is widely associated with, Moza Fay of Anamosa.

Shea’s main rival was Kirk Mommsen of Assumption growing up and Kyle Anderson of Washington in High School.  Actually, the most constant rival was a kid named Cam Sadeghi from Keokuk.  Those two met from the time they were 2nd graders until they were Seniors.

Brennan’s first rivals were Tanner Sloan, Zach Oldham, Zane Mulder and Cayd Lara and then it became mostly a constant back and forth war between he and the Feldman cousins, Jackson and Nathan. Constant…seemed never ending. He had some battles with Keaton Geerts and Grant Stotts as well. In high school, Brennan’s main rival was… probably Kyle Anderson his Freshman year and I guess John Henrich as a Senior although they met only once.

At the time when Justin was in HS, when I used to post on forums or whatever, I did not talk about some of these guys in as respectful of a tone as I should have. It is much easier for me to see the obvious brilliance of Mack Reiter and Moza Fay now that they aren’t my brother’s enemy… and I used to be so unfair to them. I regret that. However, one rival of his that I always liked to watch, even while it was taking place, was a kid named Jacob Naig from Emmetsburg.  Even Justin liked this guy and he wasn’t as chatty with other wrestlers as I obviously am. He could honestly do without talking to anyone outside the SEI crew. But Naig…There is absolutely no one like this guy. He is in a classification of his own. And was real quiet and reserved and never showed any mere glimpses of cockiness or anything close.  He just went out, wrestled like only he can and won. And it was fun as hell.  I learned a lot of technique myself watching Jacob Naig wrestle…. well, scouting really.  He and Justin met 3 times.  One match was kind of pointless in which Justin won a lopsided freestyle match. Naig wasn’t Naig that day and Justin was on fire that day… the other two times were in the semifinals at state when they were Freshmen and in the state finals as Sophomores.  Justin won the semis, Naig won the finals.  Justin hated to lose…at the end of the finals match when he says to Jacob, “good job Jake,” it was a huge testament to the respect Justin had for Jacob.  Justin rarely handled losses like that, especially in a situation like the HS state finals in which he lost in the last few seconds.  That’s how much we all respect this guy. One of my favorites.

FROM THE ORIGINAL ARTICLE: The Iowa High School Wrestling Class of 2003 produced a ton of badasses. There were two 4 time state champions that year; Mack Reiter from Don Bosco and CJ Ettelson of Hudson. However, not far behind them (and the majority of people including me would describe it as “right there with them”) were a group of mat-maniacs who beat each other back and forth, year after year.  Guys like Nick Beuter, Gabe Rostermundt, Adam Gottschalk, Justin Swafford, Jake Halverson, Kyle Burkle, Brad Gregory, Dusty Pollard, Chris Johnson, Jay Bjustrom, etc… and that’s just covering the 2003 guys. One guy who stood out as being undoubtedly one of the best in the grade was one of the funnest wrestlers to watch given his unique style. Jacob Naig from Emmetsburg-Armstrong-Ringstead.

Jake was nice enough to fill us in on his thoughts about his wrestlingcareer and what he’s up to now.

Getting the second title. My senior year, Mike Wells moved up a weight class. He was going for his 2nd title that year and nearly three years unbeaten.

My senior year Mike Wells moved up to 145 after wrestling 140 all year. The rumor was someone told him he couldn’t beat me and he wanted to prove them wrong. I think there were a lot of bets on the match. I also think his teammate and friend could only qualify at 140 so they swapped. Not sure what the real story is though. Talk about an impressive challenge to accept!! Facing your brother, Justin Swafford was tough because I was in shape and he was in just as good of shape and we were both smart, so there was no room for error…and we met twice when the stakes were high…in the semis and finals the next year…can’t get much more intense than that!

I wrestled CJ Ettelson in the semis as a Junior. I had the lead with just a few seconds left and let the match get away. I had him. I just needed to be smart for a couple seconds and I won, but I didn’t do it. That loss hurt the most.

Bob Kenny, Jim Miller, Eric Keller. I was fortunate to have great coaches.

2 Brothers. JD Naig. He was a State champ and national champ in college. Joe Naig played football in college.

High school team won team titles all four years. 3A Council Bluffs and 2A Emmetsburg beat the team scoring records in the same year about my Sophomore year.

I was always better on the mat. On my feet was probably the worst position. It became something I really worked on in high school.

Before your finals match as a Soph against my brother, you came out of the tunnel and stepped on the mat a couple minutes late…we were all in a panic in the stands wondering what was u.. for a minute people were in the stands talking about how they thought you may have gotten hurt or sick and had to forfeit, but then you came out shortly after…What happened there?

Haha! I remember that. It was a mistake. We were waiting for the 103 pound awards before we came up. After seeing the matches start we remembered they were after our match. Mitch Preston was the coach bringing me up for that match. We can blame it on him.

When we were watching a scouting VHS tape the night before you and Justin Swafford wrestled in the finals, we watched you hit a move in your semis match vs. Brad Gregory and it just floored us. You pinned Gregory with this reversed front headlock to cradle type deal that I hadn’t ever seen before. Justin didn’t really like watching his opponents or didn’t care to or something. He didn’t want it to get in the way of wrestling his own match so he came in the room and watched it maybe once and was like, “hmm that move is interesting, I guess I’ll have to keep that in mind tomorrow night.” And then he just kind of strolled off to the pool with his gf (now wife). Everyone else was freaking out. I stayed in that hotel and watched that clip probably 30 times with a kid named Chris Johnson from West Burlington who was Justin’s practice partner growing up and even in HS, for West Burlington and Mepo did a lot together. Chris couldn’t believe his eyes either. Long story short, I learned that move from studying that match and pinned probably 15 guys in college with it at Loras. Got to the point where I was hitting it from my feet. And even more ironically, I want to say that you and Chris Johnson wrestled each other the next year at state first round. I have always wanted to ask you where you learned that move? Did you invent it? I always just called it “The Jacob Naig.”

Haha yes! Mitch Preston did it/ came up with it. I’m not sure how but it was killer if you didn’t know it was coming! He got second on year at state with that a cradle and a fire mans carry! He had the strongest grip id ever seen. I think he won 46 matches on year and had like 42 pins. Also if he went 6 minutes he also lost!

HERE IS THAT MATCH:

I was involved in wrestling year round. Each year in high school I gave up other sports to concentrate on wrestling.

Real estate now. The work ethic it teaches you and the ability to deal with adversity with anything in life.

HAHA! That would be fun! Advice? Sure.