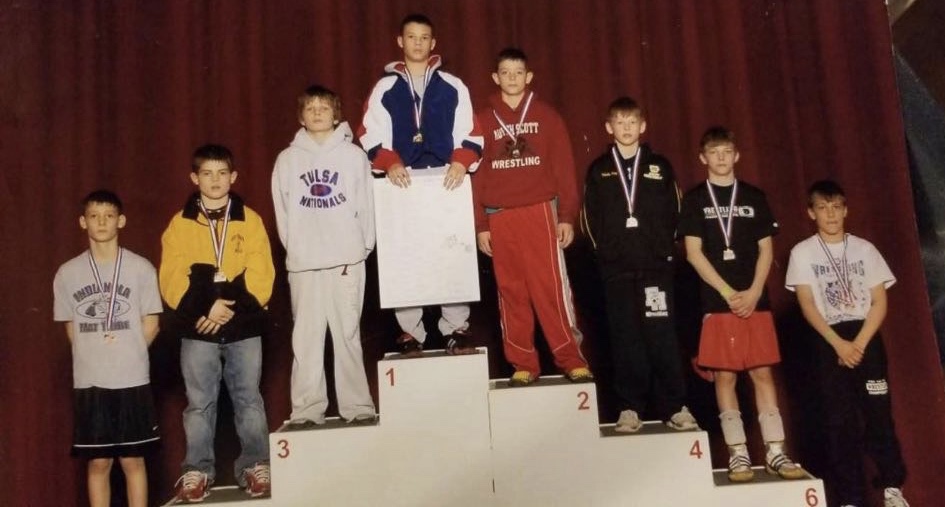 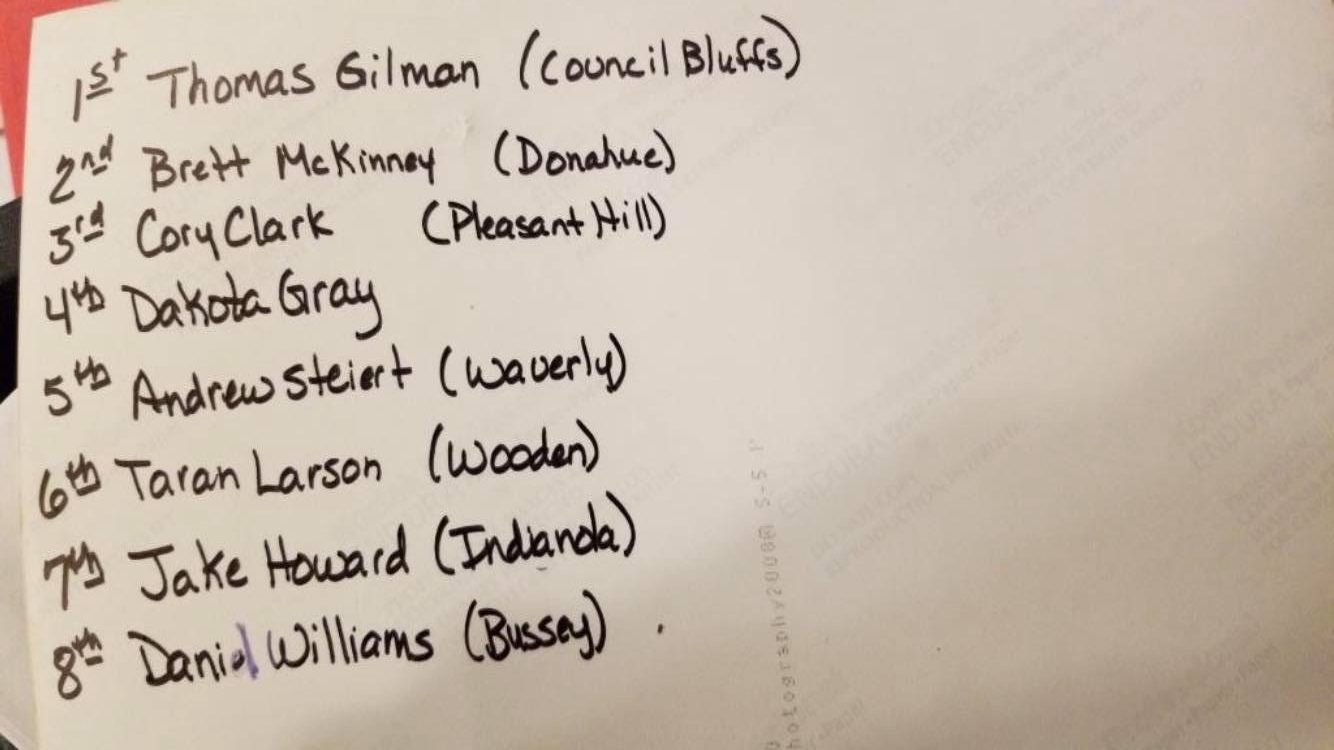 I feel like I struck gold with this one… Don’t thank me, thank Dakota Gray!!! If there was one podium pic in the history of AAU that I’d want posted on this site, it’s this one. I’ve been at the AAU State Tournament over 20 times and without a doubt, the most rockin’ I ever saw that tournament was when Thomas Gilman and Cory Clark met in the semifinals. That is, to my knowledge, the wildest AAU State has ever been. And to think that these guys went on to both become 4X state champions (Gilman in Nebraska) and teammates at Iowa where they were both stars of the team when they were there…it’s just crazy.

Thomas Gilman made the transformation from charming choir boy:

To a stone-cold, intense, unfiltered and entertaining rock star for the Iowa Hawkeyes who will take you out to the parking lot and kick your ass if you call him a choir boy: 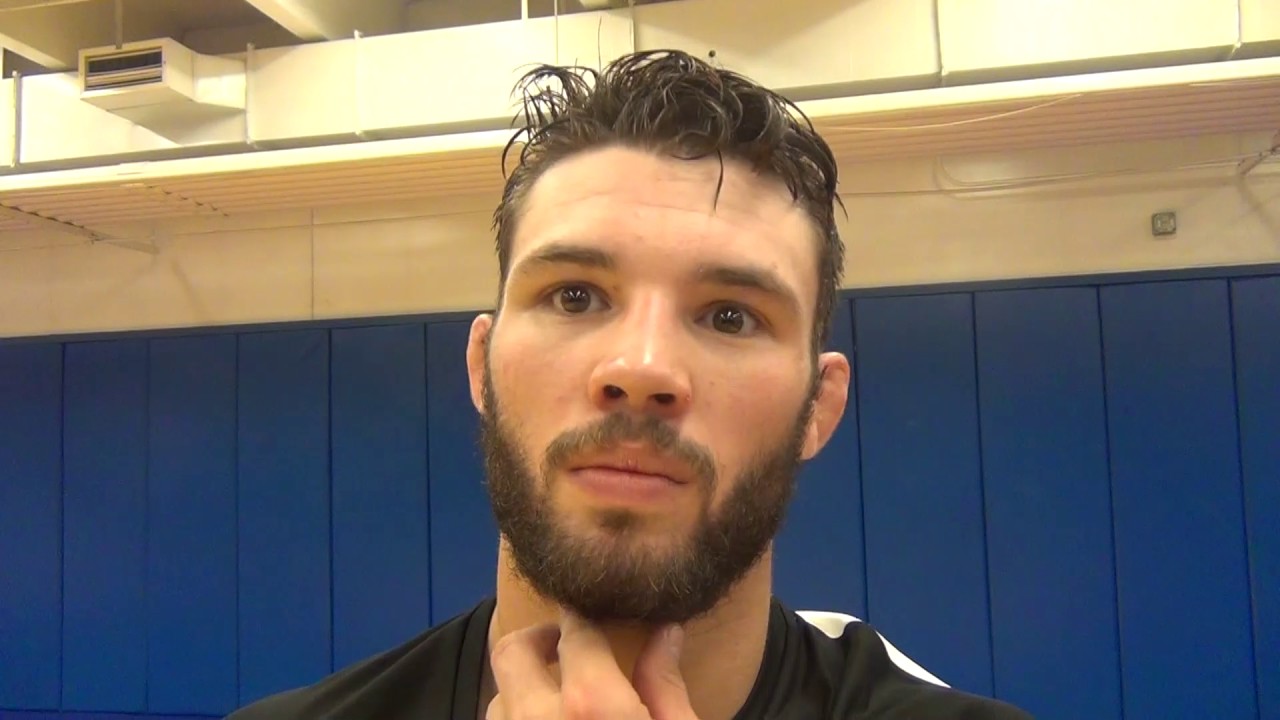 Hell, he would probably take the bully who makes fun of the choir boy outside and kick the bully’s ass…if the choir boy is a Hawkeyes fan, that is. I wonder if anyone has ever picked a fight with Gilman, not knowing who he was… I feel sorry for whoever has done that.  I witnessed one of my best friends getting belligerent and starting a fight with a guy who was smaller and therefore didn’t come off as intimidating to him.  That person was Izzy Martinez and he lit my friend up bad. And my friend deserved it. I heard from a reliable source that they witnessed an 300+ lb OL for the Hawkeye football team in the 90’s trying to push Jeff McGinness around at a party, in which McGinness (who wanted no trouble), did a duck-under and suplexed this man who weighed almost three times as much as him and knocked him out.  I don’t know why anyone who doesn’t wrestle would ever consider starting a fight with ANYONE who even remotely resembles a wrestler. Bad idea.  Gilman seems fearless and loyal enough to do that. And that’s a huge part of why Hawkeye fans love him so much.  If you aren’t a Hawk fan, you hate him…because he is hell-bent on crushing the dreams of your favorite wrestlers and will become straight up mean, if he has to be that way in order to get what he wants. And more often than not, he crushes their dreams and then backs over them a few times before leaving.  To Hawk fans, he’s a relentless competitor who wears his emotions on his sleeve and is unfiltered in his words and actions. He unapologetically tells the truth as he sees it, gives you want you want to see on the mat as well as says what you want to hear and in the process, you feel like you know him…even if you’ve never met him…It’s nice when you meet someone who refuses to lie to you.  And you get the vibe that if he were on your side, he would go to bat for you and have your back without the slightest bit of hesitation. And Hawk fans can probably collectively agree that this man loves them and is on their side. His 3 AA National finishes, silver medal at the 2017 World Championships, Big 10 Championship and O.W. performance at the Midlands tournament in 2017 are a testament to that. Oh yeah, and he was a 4X state champion from Omaha-Skutt HS in Nebraska who also won both Cadet and Junior National titles.  I’m pretty sure, the guy on top of this podium became the real deal. 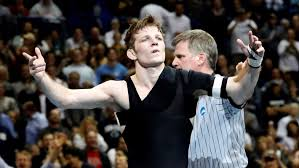 And Cory Clark got 3rd. Don’t get the wrong idea, though… the finals match in this bracket took place in the semifinals between Clark and Gilman. Clark was a 4X state champion for Southeast Polk. There were two 4 timers in his grade, the other one being John Meeks, who ended up at Iowa State. There was a very real and reasonable debate as to who got the better recruit here. And I think Iowa got the better end of the deal with Clark. And that’s not to clown on Meeks. That kid never lost a HS match. He was the real deal…things just faded a bit in college. I don’t know what happened, actually, but he was great. There were also people who thought maybe Jack Hathaway (IC West and gave Clark his only HS loss, I believe) or Eric Devos (Waverly-Shell Rock…a 2 time state champion in MN as a 7th and 8th grader before he even began his Iowa HS career…he and Clark’s battles were epic) may have been the best recruit to grab…nope, it was Cory Clark. He was a 4X AA, 3X finalist and 1X NCAA National Champ for the Hawkeyes. And he won his national title with minimal usage of his arm… Even Hawkeye-haters couldn’t help, but like or at least respect Clark.

And you can’t forget the other guys!!! 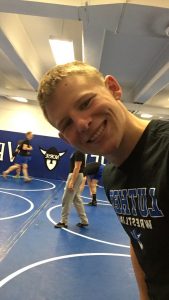 I’m not afraid to admit that Dakota Gray is my personal fave of this bunch. He’s an SE guy from a HS program that I love, Fort Madison, and I’ve known his family for years and they are great.  Two of his first cousins are a couple of my long time best friends, so they’ve filled me in for a long time. Dakota Gray was an AA at Luther College. Placer at state for Fort Madison. It didn’t surprise me a bit to see this kid have success. And get this… There are a lot of wrestlers linking up with girls who are from prominent wrestling families themselves in SEI. I’m sure people remember Stewart and Steven Holloway?  Both state champs. Both awesome.  Well, Dakota and their sister, Harlie are now married with children.  Not that wrestling breeding is an actual thing, but if it were, I’d say that their children will have good wrestling “pedigree.” Haha, there seems to be a lot of wrestling pedigree in the works with a lot of SEI kids.  Gray-Holloway, Drain (Aaron)- Holloway (Heather), Swafford (Brennan)-Mashek (Maddie) are very serious lovebirds, Happel-Durr (that’s right, Lisbon! Mepo still wants credit for the Durr-half of these Happel monsters! 🙂 ), Krieger (Jorgi)-Zippe (Taylor), hell I married a McNeil… etc.  A son and a daughter so far, I believe is what Dakota and Harlie have.  There are 4 Holloway sisters; Holly, Heather, Honna and Harlie (Dakota’s wife) and I’ve told Holly this before, but I’m 90% sure all 4 would have been good at wrestling if the girls wrestling scene would have been as prominent in their days…tons of athleticism.  Look for the name, “Gray” in the future…they have like a 99.9999% chance of being awesome…on and off the mat. 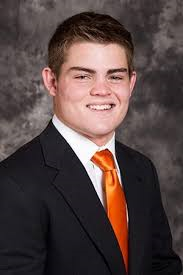 Andrew Steiert was a 3 time placer for Waverly-Shell Rock and was an All American for Wartburg.