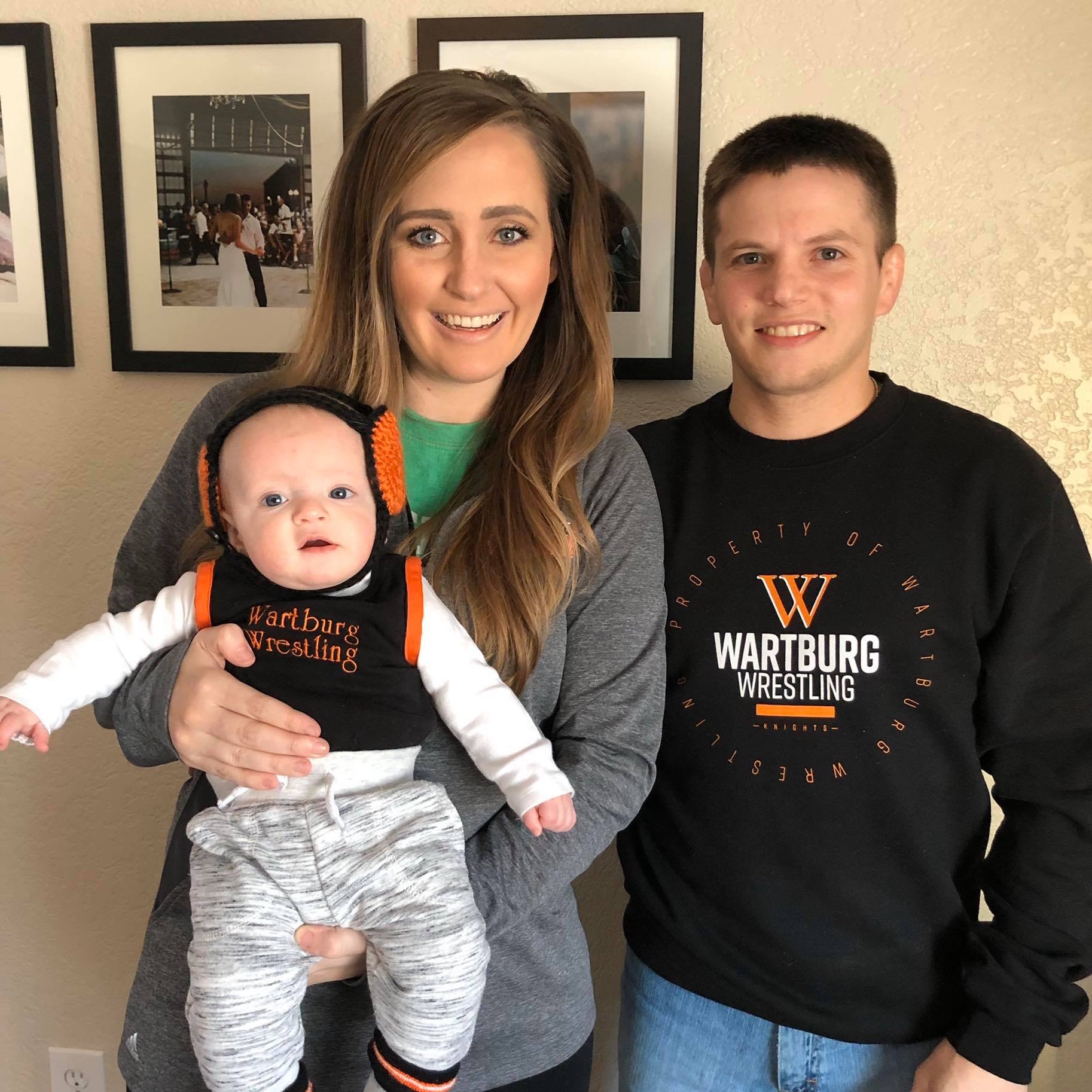 Ya know, this is at least the 4th or 5th article about someone from Eagle Grove and it’s pretty cool how important wrestling is there.  Always knew there was a rich tradition there, but wrestling seems to be a pretty good-sized part of the culture there.  I’m not going to lie and say that I know Mark Kist or have even met him previous to this, for I don’t. I did meet his brother briefly when I was in high school (who was a very good wrestler himself) and knew exactly who Mark was from the time he started wrestling in HS, maybe even from his AAU days.  With all the kid accomplished, it would have been difficult to not be familiar with his dominance on the mat in some capacity, for he did it pretty consistently especially from the time he grew in to being a full-sized 103 lber.  I can’t recall ever seeing or hearing him ever lose a match from that point on.  He was good…one of the best.  He was inducted into the Iowa Wrestling Hall of Fame a year or two ago.  When Kist was inducted into the HOF, it was one of those moments where it kind of hit me, how fast and relentless time can be, for it seemed like I had just watched Kist win one of his 3 finals matches yesterday.  Mark was very informative in this and it is cool to learn some of the stuff he mentions about his family, Eagle Grove wrestling, Wartburg wrestling and his competitors.

My parents. They both come from wrestling families, so it was only a matter of time. I was exposed to wrestling from the very beginning.

Both my grandfathers, a couple uncles, my dad, older brother and a cousin all wrestled through high school. I don’t know everyone’s credentials, but I know my dad placed 5th, 5th, 2nd at the state tournament and my brother placed 4th. My five-month-old son watches a lot of wrestling.

I placed 4th, 2nd, 1st at AAU state. I don’t know that I’d consider these rivalries since we were in elementary school, but a few names that come to mind that I wrestled several times are Ben Knight, Jordan Hasenkamp and Zach Morley.

Going into high school and all throughout my freshman year I was small and got overpowered sometimes. I lifted my ass off to put on weight and finally broke 103lbs before my sophomore season. In college, I had a bulging disk in my neck and my junior season I would get stingers down my arm every time I took a shot. I got an epidural steroid shot and took an entire summer off the mat. I eventually rested it long enough that I didn’t have any issues with it my senior year.

Were you and your brother, Michael pretty supportive of each other? Competitive?

We were both to some degree. He’s three years older than me so we were only on the same high school team for one year, but I do remember we would jokingly (kind of) flip each other crap depending on who got the most takedowns or fastest fall that day. He wrestled 140lbs when I was at 103lbs, so we didn’t actually wrestle each other.

I can’t narrow it down to just one but a few that had major impacts on me include my dad, Darin Schreck, Mike Rial, Eric Keller, Jim Miller and Chris Ortner. Also, Aaron Wernimont was my teammate at Wartburg, but I looked to him like a coach as well, he was as good of a leader on a wrestling team as I’ve ever seen.

In high school my team qualified for state duals my freshman year and placed 3rd at the traditional state tournament my junior and senior years (2005 & 2006). During my three years at Wartburg, we won two DIII national titles (2009 & 2011) and a national dual title (2011).

Eagle Grove had some pretty good teams when I was growing up and I looked up to a lot of those guys. Some names that come to mind are Justin McClintock, Luke Reiland, Kurtis Williamson, Brad Asche, Kurt McGonegle, Kurt Morgan and Jessie Whitmer. I remember reading about Kurtis Williamson winning his state title in the paper when I was in 5th grade and deciding that day that I would be a state champ too.

I had a couple tough losses at the national tournament while I was at Wartburg. My sophomore year I lost in double overtime in the quarterfinals to the eventual champ and my senior year I got beat on riding time in the semifinals (he had 1:01 of riding time). Both of those were tough to swallow.

That’s hard to narrow down but I think my best memories are team related. My junior year in high school we placed 3rd as a team with only three state qualifiers. We all made it to the finals and scored a lot of bonus points. Winning two team national championships at Wartburg was a blast, especially in 2009 because we had gotten beat by Augsburg in two close dual meets during the year but we outwrestled them at nationals. We had seven guys place in the top three in the nation that year. Individually, winning three state titles, a junior nationals title and being a two-time All-American for Wartburg are my best accomplishments.

In high school, both Cody McClintock from Fort Dodge and Patrick Makey from Logan-Magnolia gave me two losses each. In college, I wrestled Clayton Rush from Coe College at least 10 times. I traded wins with Seth Flodeen from Augsburg and Lloyd McKinney from UW-LaCrosse.

I wrestled Zach Sanders from Minnesota in freestyle a few times when we were in high school and I remember him constantly moving forward and trying to score. There was never time to relax in those matches.

Have you ever looked at some of the names of fellow 3 time state champs and thought about how proud you are to be in the company you are with them?

I’ve glanced at the list in the state tournament media guide. There are still days it feels surreal being in the same group as a lot of those guys.

I did more and more summer wrestling as I got older and more serious about wrestling in college. I wrestled in the Junior National Championships in Fargo and Junior Duals with team Iowa my sophomore and junior years, so I wrestled those summers a lot until the end of July then I took a couple months off before the next seasons began. I really enjoyed freestyle so I tried to do as much of it as I could.

Yes, I wrestled for two years at Iowa State and three years at Wartburg.

Basic and hard-nosed. I wasn’t real flashy but I focused on staying in good position and taking ground the entire time. I liked to score early in matches and keep constant pressure on.

I ran cross country a couple years, golfed and played baseball when it worked with my summer freestyle schedule.

Yes. In high school I was lucky to have Ridge Kiley and Kelby Ryerson to scrap with and in college I had several guys who were great partners including Ryan Hill, Nate Behrendsen, Mike Kremer, Alex Helmich, Gilberto Camacho, Matt Kittleson, Tommy Mirocha, Sean White, Matt Kelly and several others.

Minnesota Twins, Chicago Cubs and Minnesota Vikings for professional sports. Wrestling wise, obviously Wartburg and I like to see all three D1 programs from Iowa do well.

It taught me to outwork people, how to control my emotions, to be responsible for myself and my results, how to persevere when things aren’t perfect and how to be self-motivated. I learned that very little will be given to you, everything must be worked for and earned just like the real world. Also, most of my social circle to this day is made up of people who I met through wrestling at some point.

I volunteer at Wartburg as a workout partner for the lighter weights. I usually get in to practice about once a week. I still watch wrestling as much as possible.

How cool was it being inducted into the HOF?

It was really cool and very humbling. It was a lot of fun to be on the floor of Wells Fargo Arena before the state finals again.

You’ve only got a few years to accomplish what you want to in wrestling so take advantage of all your resources and commit to moving closer to your goals every single day. Don’t wait until the next season to be good or accomplish something, do it right now. It’s no secret that the sport can suck sometimes but it’s very rewarding to know you did everything you could do to get better when you had the chance. You’ll be glad you put in the time and work when it’s all said and done.

I doubt it but who knows, I could maybe be talked into it at some point. My wife never saw me wrestle so maybe I should go to one and try to impress her? That could backfire though.

Would you like to give a shout out to anyone you wrestled with, against, coached, etc.? Shout out to

Eagle Grove’s Jessie Whitmer and my Wartburg teammate Justin Hanson for being inducted into the IHSAA Hall of Fame this year.

My good friend and Wartburg national champ heavyweight John Helgerson wrestled a match with his singlet on backwards during a dual meet in college. He had no idea it was on backwards until he went to put his ankle bands on and realized the ‘Wartburg’ script wasn’t on his singlet leg. He pinned the guy and walked off shaking his head and laughing because he knew we were all having fun with it. We still laugh about it to this day.