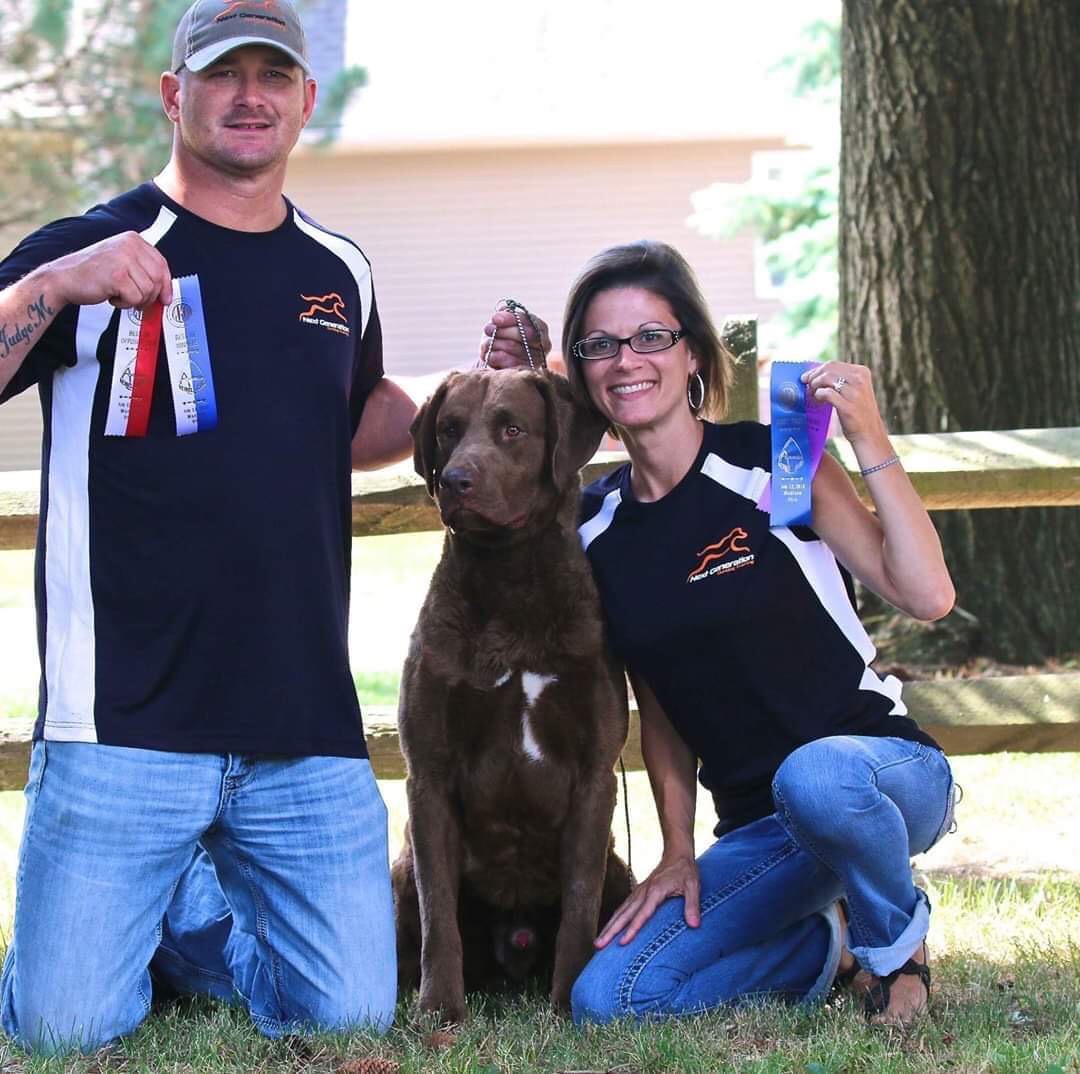 The first time I met Brian was here: 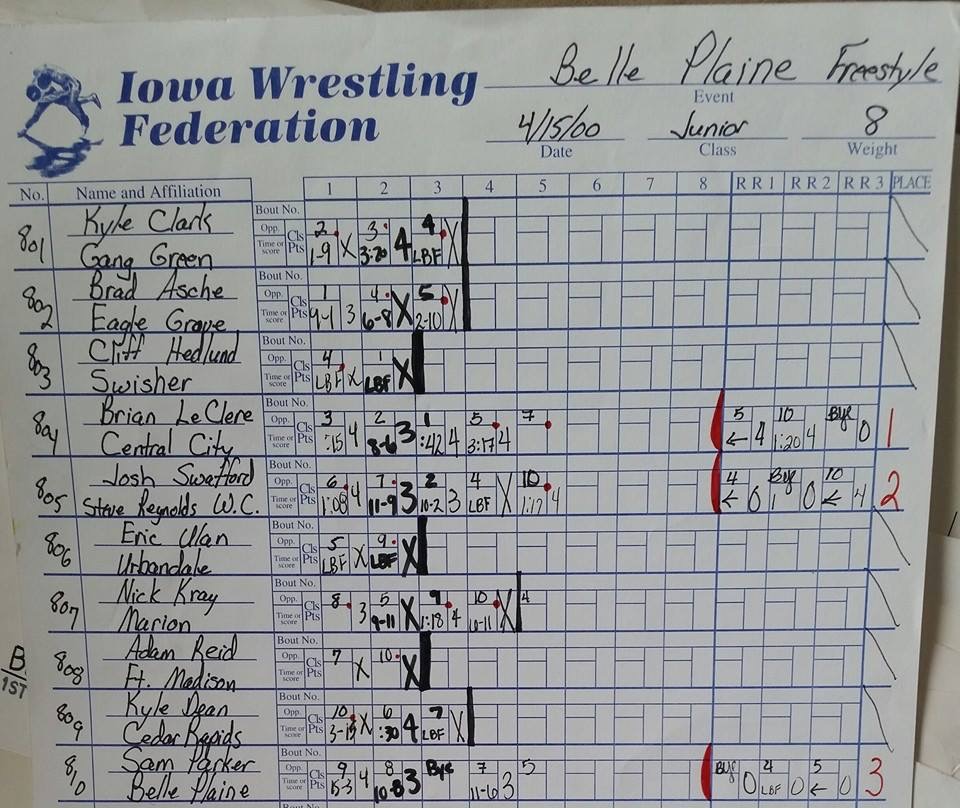 As you can see, he won the bracket and I placed 2nd. I was really cruising that day, too until I ran into him. He was so solid out there.  This was a tough bracket that we were in with multiple qualifiers, placers, finalists, etc.  So he was obviously a good wrestler. That was my first impression of him.

Then I went to college with him at Loras and we wrestled together there for a year or two.  I have a lot of respect for Brian because even back then when there are social pressures that cause certain people to act a certain way or treat people a certain way, he said what he believed, regardless of whether or not people wanted to hear it and he formulated his own opinions about someone or something before he would let someone else try and encourage him to lean a certain way.  I’ll never forget it. One time I was talking to him outside the dorm called Binz Hall and I made a negative comment about someone on our team.  I think I said, “so and so is an idiot…right?”  And he looked at me and was like, “no, actually he is a very nice person and would do anything for anyone, why would you think that about him?”  And I replied, “ah, I guess that’s just the vibe I am getting about him with what some of the people around here are saying.”  And he patted me on the back and said, “I think you are above that shit. Don’t stoop to that.  Don’t form an opinion about someone unless you get to know them first because most the time, when you hear bad things about someone from other people, it’s usually not true. Don’t ever feel you need to trash someone to be cool.”  I took that advice to heart and I have tried to remember to keep that in mind ever since because he was spot on.

My dad wrestled. He is the main reason I got into the sport. Mother loved the sport. Even if it would almost give her heart failure. I didn’t have any brothers, but I had a twin sister and 2 older sisters that were very much a part of the wrestling lifestyle. The LeClere’s were a wrestling family. It’s all I knew since I was in preschool.

Like I said, my dad wrestled. My son currently loves to wrestle. He is in 2nd grade. All my cousins,  Mike, Dan, Nick and Chris LeClere all wrestled. We all traveled together when we were younger to tournaments.  Friday, Saturday and Sunday tournaments all the time. We all wrestled well. Dan did so-so. Hahaha! Kidding. We all know his accomplishments. Chris and Nick both did well.

We traveled a lot. I made it to the AAU state tournament. It was a huge head game for me with big tournaments. Got to the big stage and my nerves would kick in.

I never really kept track of my wins and losses. I would have to go back and look. I know my 100th win was at state my senior year. Other than that, I never really cared about records. I just hated losing.

I qualified for state my senior year. However,  I did not place.

The weight cutting was always a challenge for me. Not because I couldn’t lose the weight,  it was keeping it maintained. I was fortunate to be able to lose 8 or 9 pounds in a practice. But somehow, I would be the only one chewing an entire pack of gum, spitting in a cup and running up and down the row of the bus on the way to the tournament.  How it turned out? Well, I always made weight. I broke my arm, broke ribs, etc., but that’s just part of the sport.

In high school, I was always warned by referees for potentially dangerous moves. It was very frustrating. I always felt that it was a battle. So let us battle! I think that’s why I liked the college level and freestyle. It was a grind. You would get the whistle with a hard cross face in high school. Whereas in college,  you could almost rip their nose off.

Freestyle was the most fun. I loved the fact that I could throw a guy and the higher he went and the harder he hit, the more points I got. Or the front facing head lock with a gator roll. I would sinch it up so tight I could hear them gasping for air. That’s when I knew it was go time.

I’m sure there were a few guys I went back and forth with. Bart Mehlert was the most frustrating. I would meet him in the finals of tournaments and he won every single time. J.J. Butteris was another that seemed to be a pain in my ass.

My high school coach Jason Aarhus was very influential for me prior to college. He introduced me to freestyle, which I loved. We traveled to tournaments and had a lot of fun.

Randy Steward at Loras College was by far my most influential coach. He was hard-nosed. Extremely tough. He was there during the most challenging times in my life, on and off the mat. As much as I would test his patience, he kept me in line so I didn’t completely fall off the edge in college.

Central City was not very competitive as far as a team goes. It was more individual wrestlers that would shine.

Loras was extremely competitive. We were always ranked in D3 and we had some really awesome guys grinding it out in the room.

I had posters all over my room of the Brands brothers. Cary Kolat was also a favorite of mine.

Spencer Lee is always fun to watch because of his technique.  Alex Marinelli because he’s a work horse. Of course Austin Desanto because he’s cocky and has no problem embarrassing guys on the mat. Internationally,  I like Dake and Snyder

Every district loss I took in High School where I wound up short of going to State. Also the Varsity meet at Loras against Upper Iowa. My entire family was there. I lost my head after the guy came from left field with a cross face and a closed fist. I literally wanted to knock his teeth out. I reacted and cost the team a point. And to add injury to insult, I lost that close match. The coaches definitely made me pay for that mistake.

I would have stayed more focused. I definitely would have traveled a lot more and wrestled Freestyle.

In High School, finally making it to the State tournament.

In college I had to wrestle a guy named Craig Collins who earned the varsity spot. He was the type of guy that would let you get into a position and you’d think to yourself, “I’m definitely going to score” and then all of the sudden, you’d find yourself getting scored against. Only guy I’ve ever known that could pull some monkey mat move and come out on top. He was definitely legit. So wrestling at the D3 JV college tournament and winning it was an accomplishment.  That was some very tough wrestling. My finals match with Wartburg was a battle.

Once I was introduced to Freestyle, I wrestled year round.

I’d like to say that we would all make them crawl off the mat crying.  However, that’s just me not accepting that I’m getting older. There are some good kids today. I’ve seen a lot of changes over the years, we but had some pretty tough guys back in the day.

I played Football and Baseball.

Steel Curtain!! And Iowa of course.

Anything outdoors. I love to hunt, fish and go boating. I also have a passion for training retrievers.

Being able to take life regardless of how hard it can be and punch it in the throat when it wants to get tough. I have a huge respect for people who go through life earning it every step of the way. Work ethic is always something you’ll never lose once you’ve wrestled.

I am a Locomotive Engineer and Conductor with the Crandic, Cedar Rapids and Iowa City Railroad.

Very much so. My son wrestles and when I can, I help coach kids at Vinton, IA and Center Point, IA.

Work hard and stick it out. Have fun and cherish this sport that will have an everlasting effect on your life.

I wish. If I were to get hurt, I’d never hear the end of it from my wife. But, since I wear the pants,  it’s a possibility. (She won’t see this, right?) Haha.

To everyone that has been through and will continue to give through this wrestling life with me. I’ve met some pretty amazing people in this wrestling family that I will cherish for life.

Do you have anything to add? Funny/interesting stories? Trivia? Etc. jswafford

My college nickname was Neckbone….I kid you not! They named this move that I liked,  the Neckbone Trip. Good times!

Next post: What the WHAC Adding Wrestling Could Mean For the Sport