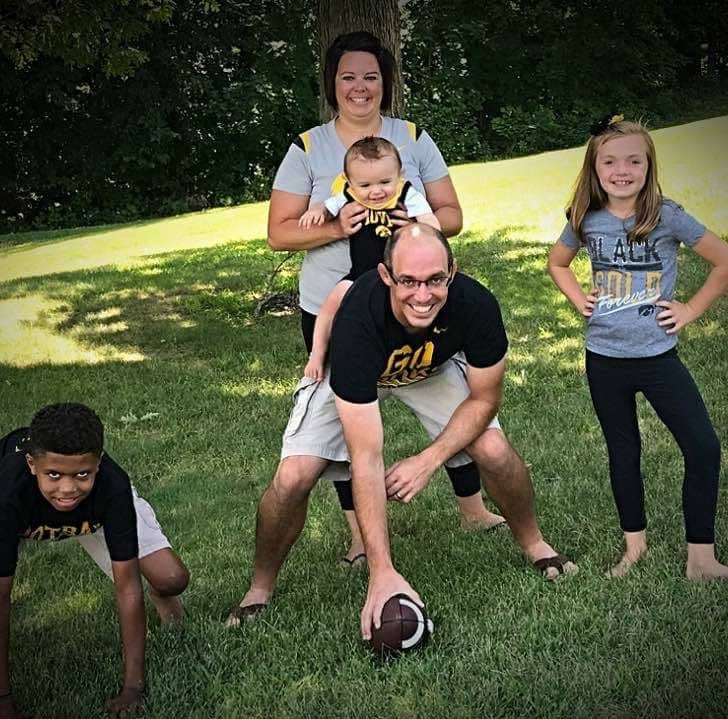 ROSCO!!! Ross is a great dude. He and I go way back. We were practice partners in Junior High. He was the one guy that I remember who started later, like 6th or 7th grade and was able to be a formidable practice partner for me, or my other primary practice partners; Phillip Klees, Adam Roberts and Justin Kramer. Sometimes with wrestling, if you start late, it can be frustrating for quite a while because it’s a slow process making up the ground you lost due to all of the complexities in wrestling. Ross caught on real quick, though. And lived and breathed the sport from the moment he began. If he would have started at a younger age, he is a guy that I am confident would have done better at state. When he was in his 2nd or 3rd year at Central, he really hit his stride. He’s a nice person. He’s a good family man. He is loyal to his roots in Burlington. He’s intelligent. He’s one of the brightest wrestling minds I know. I’m always pretty pumped up when I get his approval on something I wrote and posted about wrestling, for I respect his opinion a lot. Really, I can’t compliment this man enough.

My brother Ryan started in 8th grade and was 3 years older than me. I got interested in it when he was in high school and I started in 7th grade.

My older brother Ryan wrestled in high school, but usually had to wrestle up a couple weight classes because our team was pretty good.

Didn’t start until 7th grade and that was a pretty brutal year because it seemed like every tournament I went to, I was paired with you (Josh Swafford) or Adam Roberts. That didn’t work out too well for me. My 8th grade year I qualified for AAU state but went on family vacation to Arizona for 2 weeks instead.

Qualified for state my sophomore year.

Not qualifying for state my senior year. I was in the finals of every tournament all season except districts. Finishing 4th at the Iowa Conference tournament my sophomore year of college and not getting a wild card. Guys that finished 1st, 2nd, and 3rd at conference finished 2nd, 3rd, and 4th at nationals. Also, a coaching change between my sophomore and junior year of college really changed the trajectory of my wrestling in wrong direction.

Unorthodox. Wasn’t the best on my feet, but was pretty good on top.

Mike Richart was my high school coach at Burlington and he was a master technician. I was his practice dummy my junior and senior year and that man couldn’t show a move @ 70%, it was 100% or it felt like it all the time.

Senior year 3-2 loss in district semifinals to Mike Somsky from Iowa City High. Lost in OT my junior year at districts also to him.

Our team broke many school records that still stand today. Most state qualifiers 7 my freshman year. 17-1 dual record my junior year. We just had stacked districts with Iowa City High And Iowa City West both ranked top 5 or we might have qualified for state duals.

Probably John McClure in high school. He seemed to do everything the right way. Was a leader by example in the room. Also followed the Hawkeyes and was a big fan of Lincoln McIlravy and Joe Williams.

Gotta love Desanto and Lee for the Hawks. Big fan J’Den Cox seems like no one can touch his legs.

Didn’t wrestle too many guys multiple times where the result changed except for my sophomore year at districts, I beat Nick Jerrell and Adam Reid to make it to state. They had both beaten me two weeks prior. Iowa Conference was always tough so lost to multiple nationals finalist Dustin Bliven, Cory Connell, Garrett South but I wouldn’t say it was competitive. Did have some good scraps with Chase Weller.

Seasonal. I played 3-4 sports all through high school. Summer after my junior year I didn’t go out for baseball and wrestled some freestyle.

Football and Baseball every year and Soccer my senior year. Only athlete in my grade to get four varsity letters my senior year (Rick O’Daniels Award).

Assistant Coach at Burlington high school the past 11 years

You only have one high school career so don’t take any shortcuts and give yourself an excuse. Work hard and put in some extra work when no one is watching.

I wrestled in a couple of them 5-6 years ago, but now I’m getting even older. Maybe Corn Cob nationals now that I could wrestle in the 35 and older division.

My coaches Mike Sayre middle school and club coach. Mike Richart, Alex Sherwood, Tim Kelly, Ben Thomson as high school coaches. Matt Diehl as my college coach. My family has also been so important to my wrestling career. My mom and dad were at every event I had.

I beat two local guys in college that when they left their high schools they were the career wins leaders. Only division 3 guy to take down Garrett South his senior year before the NCAA finals according the Dave Mitchell.