There will be an AAU podium pic that I post one of these days that is just incredible. Had like 5 state champs, 6 finalists and I think all placed. Jacob was in that bracket and remembers it well to this day. He and my brother actually wrestled against each other in that one and he gave my brother a good match, just as good as about any he had that year and he was in the grade below him, to boot. I knew we hadn’t seen the last of him and while he and my brother never met up again, we did see him and the Hudson wrestling powerhouse he was an integral piece of tear through Vets Auditorium like a wrecking ball. And the guy continues to give back to the sport today. This guy was a helluva wrestler and a great person for the sport of wrestling in general. 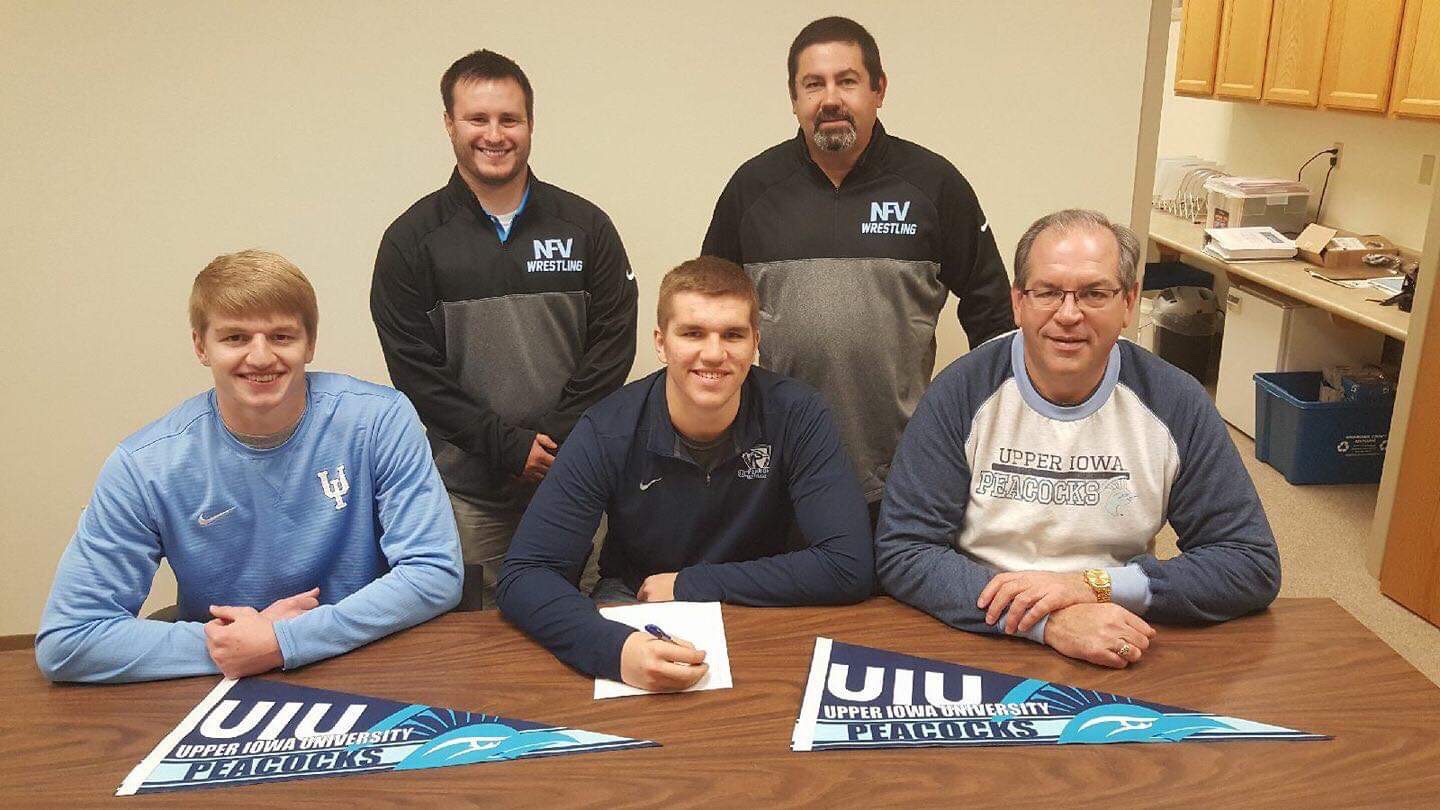 My Dad encouraged me to wrestle. If it wasn’t for him, I would have probably been the next Michael Jordan.

My Dad wrestled in high school. I don’t think he wrestled much, however I know he won a JV tournament. (Saw the picture!)

Well I started wrestling when I was in Kindergarten. Only wrestled a handful of tournaments early and progressively wrestled more and more. I didn’t start to have real success until around 6th grade. I qualified for AAU’s 6th grade and 7th grade years and didn’t place. Was one match from placing my 7th grade year. I’ll let Swafford talk about that bracket! In 8th grade I took 3rd at AAU state. I had to beat some guy named Chad Beatty to even place.

Best bracket I was part of my youth was probably when I was in 7th grade at the Wapsie Valley Tournament where Russ Cox loved creating crazy matchups. Well again I was a 7th grader and had an alright record. Well it was good enough to be thrown into the same bracket as Mack Reiter and some 6th grader. I knew Mack but at the time I was like why is a 6th grader moving up to wrestle Mack? Well My first match of the tournament was against this 6th grader and I won. No big deal. I then ended up getting pounded by Mack Reiter for the 100th time that year and taking 2nd in the bracket. The 6th grader was the man Ryan Morningstar.

Cutting weight was my biggest challenge. I just didn’t do it the correct way. It still bothers me today I didn’t take care of myself and put myself in the best position to win. It ended up hurting me where I didn’t qualify for Nationals. However, in the big picture it has taught me so many things about wrestling to teach my student athletes, so they don’t make the same mistakes that I made!

Rolie-polie… I just know everyone said they hated to wrestle me because I could hit some kind of roll at any moment. I basically just rolled around because I had no other technique!

With guys in the room like Charlie and CJ, Dane Reiter, Matt Yuska, Zach Ingles etc. what were some of the battles like in the practice room?

Wow those are some tough dudes and great guys. Literally when I hear the quote about Blood, Sweat, and Tears I literally think about how it was in the Hudson wrestling room at that time. I would leave the wrestling room in tears at times because I would get my butt kicked by all these guys. We literally all made each other better in all aspects of wrestling and life. It was just a fun time to be in that room. Nothing was off limits to get a takedown or to get an escape. If you had to use the wall you used it. I especially used it at times, because again all these guys were relentless!

How proud were you to be part of 2 state championship teams at Hudson?

Very proud. A moment I will never forget.

Courtney Landis, Dan Helgerson, and there were a few more but can’t think of them right now.

Toby Bedard and Heath Grimm. Bedard was my High School coach and he really understood me. I was very immature during those years and he really tried and eventually made me a better person.

Grimm was my coach at Upper Iowa. He pushed me hard in the wrestling room and in the classroom. Very grateful for having Grimm and Bedard still in my corner today!

Yes. High School we won traditional state in 03 and 04. In college I was on teams that brought home a DII trophy.

Tom and Terry Brands, the legendary stories of Dan Gable.

My last college match. I was one match from qualifying for DII’s in Cedar Rapids. I lost in an OT match.

How I cut weight in college. I should have been smarter and done it the right way. It really cost me a chance at qualifying for Nationals and a chance to be an All American.

Winning a State Championship and a State Team Title with some of my best friends!

Mack Reiter – he beat me down a lot and was very lopsided.

Corey Kalina – Again Beat me up.. Loved how he wrestled.

Franklin Gomez 1st round of Midlands – Quickest guy I have every wrestled.

Minga Butchuatz- However you spell his name – 3x National Champ from St. Johns – I actually beat him

Almost all year. I tried to wrestle all summer with Freestyle and Greco. I did play football so I did a practice or two a week.

I felt after Christmas break I was in a groove. I wrestled a few guys that I had close matches with before break. I wrestled again and widened the gap. I felt my conditioning put me over the top the 2nd half of the year.

I think just fine. There are studs from each era.

Fishing, BBQ, watching sports, and spending time with my two girls and my wife.

I just read Corey Kalina’s Remember the Wrestler and sorry but it’s true. “Once you’ve wrestled, everything else is easy”. Dan Gable I am a true believer that wrestling has shaped my mind to make everything seem easier. All the hard work I put into the sport just puts other things into perspective.

I am currently the Behavior Interventionist at the Downtown Academy – North Fayette Valley High School. I am also the Head Wrestling coach (9 years) and Jr. High Football Coach. I am married to my lovely wife (Shanelle) and have to beautiful girls Roselyn (2) and Maelyn (9mo).

Sure am. I am the head wrestling Coach of the North Fayette Valley Tigerhawks. I’m currently in my 9th season.

I tell all my wrestlers before every match to Wrestle Hard and Have Fun.

No. I tried to wrestle my State Champion 220lb wrestler a few years back at our Alumni dual and it didn’t turn out to well. I blame it on him being a little heavier than me!

Shout Out to all my Peacock and Pirate teammates!

Keep up the great things you are doing Swafford. Grow Wrestling!!