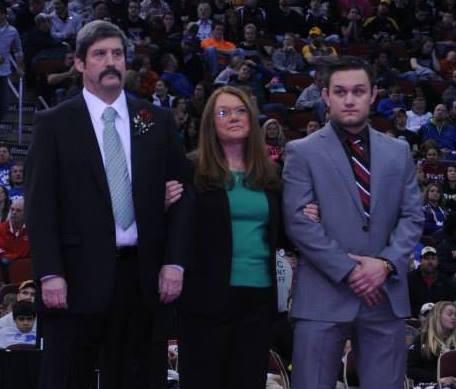 Johnny Siegel is one of the best to go through New London’s wrestling program… and that’s saying quite a bit…New London has had some great wrestlers.  There was a lot of attention on him at every event that he wrestled in, for he is the son of a SEI legend.  John Siegel.  Seriously, ihen the wrestling communities he has coached, pretty much every wrestling fan talks about Siegel as if he is the real-life Bill Brasky. And Johnny delivered.  He accomplished a lot at New London and Coe and continues to do so by being a long-time coach of one of the top wrestling clubs in the state of the past 10 years, DC Elite.  He has coached my 2 youngest brothers for years. We are very thankful for that.

​I was around the sport of wrestling my entire life due to my dad coaching.  He used to take me with him to Columbus Junction practice when I could just walk.  Wrestling was just something that was part of my daily life.

​My Dad wrestled in high school at Bettendorf and continued his career at Coe College.

​I wasn’t very good as a youth wrestler.  My dad didn’t believe in taking me to a bunch of touraments when I was young. He wanted me to prove that I had put in the work at practice and deserved to go.  I actually never even placed at AAU state as a kid.

​When I was younger I had a really hard time staying out of my own head. I used to get really nervous about losing or looking bad. In my mind because John Siegel was my dad if I didn’t do well I was letting him down. Which he made very clear to me was not the case, but I had made up this idea in my head. Once I realized if I just wrestled and believed in myself all of the negative thoughts went away.

​My style was different than most. I wanted to wrestle the entire match on my feet. I would only ride a kid if I was forced to with short time left in a period. On my feet was the easiest place for me to work on getting a kid tired so when the 3rd period came I could score multipe takedowns.

​My dad, John Siegel was my most influential coach. Having your dad be your coach and dad at the same time isnt always ideal, but we made it work. He already knew what he expected out of me and I was lucky enough to have that plan in place.

​Every loss was upseting to me, but probably the worst one I ever had was in college at national duals. I was starting for Coe at 141 pounds as a freshman. I had started the year off well, but the college season was so much longer than I was used too. We wrestled Wartburg in a dual that was going to be really close and I got teched by Zach McCray. I had never been teched in my life and I started to think I wasn’t good enough to wrestle in college.

​Yes, We finished 2nd in the state as a team my senior year. We had a graduating class of 40 some kids and 3 individual state champions in wrestling. In College my team placed top 5 in the nation all 4 years. I have been very lucky to have such good teams and coaches in my career.

​I had two people that wrestled for my dad that I really looked up to. They both spent a lot of time with me . The first is Bobby Forseen who used to always come out to our farm when I was little and spend time with my family outside of wrestling. Then when I got into high school and had some injuries he spent hours working with me in a controlled environment so I could get all the mat time I needed. The second was Dustin Bliven who treated me like a younger brother and was one of the major reasons I ended up at Coe College.  He was able to make me grow mentally in much more than just wrestling, but in life which I try to coach now.

​Well I might be a little biased but at the division one level it would be Max Thompsen, At D3 it would be Cole Erickson and NAIA would be Josh Wenger. All in their senior years with the ability to win the national title.

​I think everyone would like to go back and change something about their career, but all the negatives should make you grow as a wrestler and person. If I had to pick one thing to change I would have bought into the weight room more. I really didn’t enjoy lifting weights like most people on my team did which could have made me such a better wrestler.

​I wrestled all year around from 8th grade through college. I was very lucky to have a group of guys that went every week no matter what.

​I really enjoy spending time with my daughter that is about to turn 10 months old. My wife and I spend a lot of time redoing properties and building things together. I also enjoy coaching wrestling for all my club kids and spending time with their families.

​I would say that wrestling has made a bigger impact on my life than most things will. It has taught me to work harder than other people in my day to day life. Plus all the connections I have made from wrestling have played a big part in building my business.

While being a successful club coach, was it easy for you to understand and relate to some of the guys who maybe the sport didn’t come naturally to? Did you ever find yourself getting frustrated or were you always pretty patient?

I relate to the kids that the sport doesn’t come naturally too.  I had to spend much more time in the room and on the mat to become good because I wasn’t natural. I have really tried to make the style I coach, basic and I prioritize teaching how important the mindset of staying basic is. When you get into a high end match all the fancy stuff goes away and it comes down to having the ablity to be mentally strong and not make a mistake. I just want the guys I coach to believe mentally that they have put in the time and actually believe it so they don’t have to tell themselves lies.

One of the best things a club or team can possess is the compatibility of the coaching staff’s styles.  Your dad and Plein is an example of this.  It appears that you and Dusty are as well. Would you agree with this?

​I would totally agree with this. I spend 100% of my time in Southeast Iowa at my club where I have really tired to push this. My dad is always at practice and outside the highschool season I am able to get a handful of area high school coaches in the room. Then a lot of the kids who are in college now that are DC Elite alumi are back in the room such as Jack and Will Luice, Sam Loyd, Cole Erickson, Shea and Brennan Swafford, Drew Foster and Max Thomsen.

How cool is it seeing the kids you coach make strides on and off the mat?

​I would think if you asked most people who coach, this is why they make the sacrifice from their families. I personally like to see the gains off the mat more than on. What I really want the guys I coach to buy into is the lifestyle wrestling creates for you. If you take the hard work that most wrestlers are used to compared to the average person on the street you should know you can out work, out earn, and out grow the competition.

​I am a financial advisor for an investment advisory firm.

​Yes, I coach my club practices on Tuesday and Thursday nights in Mt Pleasant and Burlington.

​Find a group of people your age that have the same goals as you want to have so you can always hold each other accountable. Have fun with the sport and know if you don’t get the results right away you have two choices, quit or keep working to pass the people that are ahead of you. If you buy into the grind you will be sucessful on and off the mat. Fall in love with the weight room and forget about cutting weight.

​I am retired from putting a singlet on. My wife has never seen me in one and I don’t want her to leave me.