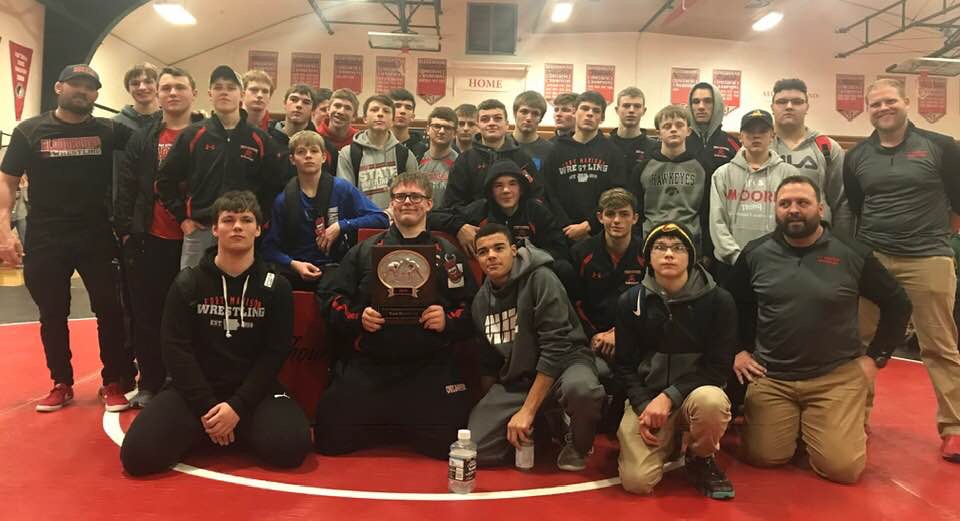 I’ve known Derek since he and my brother wrestled an OT match as 1st graders and in all the years that have come and gone since, I have never heard anyone say one even remotely negative thing about the guy because…seriously, how could you? A person would have to be condescending by nature and would have to brainstorm real hard to think of something negative to say about the man. He treats everyone with respect, he’s an active learner and student of the sport (as well as other sports), he takes advice and listens and learns from anyone he talks wrestling with and he continues to give back to the sport today from multiple angles, whether it be coaching, administration of events, officiating, you name it. Great dude.

When I was 5, my father asked me if I was interested in giving it a try. I remember the conversation. To be honest, I thought it was WWF. I was confused when I walked into the room and didn’t see ropes and turnbuckles.

I was fortunate enough to wrestle a lot when I was a kid. My parents took me wherever I wanted to go. There were several tough kids in the area but I remember wrestling guys like Justin Swafford, Gannon Hjerleid, Brady Graham, Cody Smith, Adam Claussen, Beezer Nolda and several more. A lot of memorable battles.

I honestly have no idea. The easy answer is-not what it should have been.

I had a lot. I only wrestled my Senior year as a full season. I had some injuries and surgeries that held me out for parts of season. My sophomore year was my first experience cutting weight and I had a pretty hard cut. After Christmas I had a really hard time keeping it down. I really had a crash course in discipline and toughness during this time. A lot of life lessons.

I would say technical. I have always enjoyed the smaller details of wrestling.

I grew up in a great room. I have had amazing coaches. Coach Smith is at the top. He has taught me so much and still does. Coach Rascon, Coach Riley and Coach Hayes were amazing as well. I was also lucky to have Coach Pickford around during my athletic career and the beginning of my coaching career. My dad, Chris Pennock and Dennis Reid were very influential throughout it all also.

My senior year team went 19-1 in duals and won several tough tournaments including an awesome race to the finish at CR Jeff with West Delaware.

Nick Flach, Jason Crooks and Adam Reid. I was in elementary school when Flach and Crooks were in high school but they would pick me up and take me to summer practices and tournaments. Looking back, that was really awesome! I was lucky.

I am just a fan of wrestling. I will watch anyone and try to pick something up.

How would the hammers from your day stack up against the current ones?

Wrestling has definitely evolved but I believe that the hammers from back then would adapt and be relevant today.

How cool was it watching your brother dominate at state?

It was one of the best experiences of my life. Unbelievably proud of him. We were close, but when I went away to college we became closer probably. We talked a lot and would discuss things like where I messed up and what adjustments needed to be made.

My last match of my senior year. It was a big match that I was winning and I tried a really dumb roll through instead of doing it the right way. I got caught flat on my back and pinned. I knew better because I had great coaching, but I cut a corner and payed for it. I still struggle with my thought process on that one.

Find fun in competing. I was always wound too tight and didn’t allow myself to have fun with wrestling. It’s a beautiful sport and I wish I would have enjoyed it.

Now that I am older, I reflect on the friendships that I made inside the sport. I started when I was 5 and met a lot of wonderful people and built a lot of strong friendships. It’s still that way. The wrestling community is made up of great people.

A lot of the same guys I mentioned from my youth wrestling years.

All year. I didn’t compete as much as I now wish I would have but I was in the room.

I did not, I played football in college.

In high school I played football and ran track. Growing up I also played a lot of baseball.

At FMHS I teach Biology, I am the head football coach, assistant wrestling coach and also the head strength and conditioning coach.

I am an assistant at FMHS. I am on the board for Iowa USA wrestling and help with the freestyle and greco teams.

I wouldn’t be opposed to it. I compete in Jiu Jitsu and have a lot of fun with it.

I love being around wrestling people. It’s always great to see people from the past and present and get to talk wrestling.