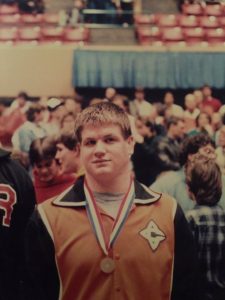 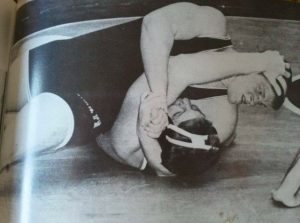 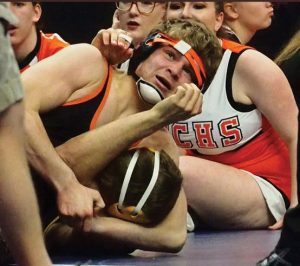 I have a Sophomore and a Senior that both wrestle. Jack, the oldest is more in to it than Jakob. Jakob wrestled real young, but just started up again last year as a Freshman. I think he left the sport for 5 years. Big Jack has always loved wrestling. Even when he got pinned every match as a youngster. Jack is fairly accomplished as a Highschool wrestler. He has more to give the sport as he is just starting to mature.

Yes, I wrestled growing up, but not in college. I chose to play football at the University of Northern Iowa. My sons got into it just for the fun of it.

I got pretty nervous wrestling at state but I get a lot more nervous watching my boys.

Proud wrestling moments… I guess that both my boys are participating in it. The fact that the sport teaches young people so much is why I’m glad they are doing it.

Yes. There isn’t anything about wrestling that doesn’t affect you on a day to day basis when you are an adult. It teaches so much.

What do you have to say about the Charles City wrestling program?

Our former coach is back. He is a man I grew up with. I think Dave Williams will elevate CC wrestling. When my brother and I wrestled here, CC was a team that people didn’t want to go against, but now we don’t even fill out every weight class. It’s hard to watch since I was on a team that won the 3a team title in 86. Hopefully the Comets will get back to the top some day.

Nick Hobbs was my head coach in Highschool. He and Dan Pavlovich were extremely influential to me. My parents were great parents and very supportive of all us kids in whatever we did. Always there cheering!! Then of course the coaches my brother had, which I got to be around also shaped me. Pretty high power list that my brother and I were blessed to be around. Jim Miller, Dan Gable and Kirk Ferentz when I went to football camps. Steve Bass used to beat the crap out of me my senior year. I believe he’s an administrator at Urbandale High School now. Those were some of the “big” names but others as well helped along the way.

Probably Jacks 8th grade year. He was always a short chubby kid like his uncle. He usually had to wrestle up a division to get matches and would get pinned all the time. I had the same conversation with him as my dad did with my brother about maybe trying swimming or something else. Mark, my older brother was pinned a lot when he was young and on multiple titles in high school. In 7th grade Jack shot up and lost some baby fat. 8th grade he placed at AAU state and led the whole tournament in pins in least amount of time. That’s a moment that sticks out to me. It was his look on his face after the placing match that he figured out that he could compete with the best.

I played football and threw discus and shot in track.

My boys and I like to fish and hunt and enjoy watching wrestling of all levels. They are both teens now so I’m not quite as cool to hang out with as much. For the record.. they are wrong.

My boys and I like to fish and hunt and enjoy watching wrestling of all levels. They are both teens now so I’m not quite as cool to hang out with as much. For the record.. they are wrong

So I’ve known about you guys for over a decade because one of my good college friends, Scott Sindlinger, always talked about his badass uncles. He was very proud of you guys. How much does it mean to you that your badass reputation has lived on so long and that your nephew is so proud of you?

Although I’m not much of a “badass” as you stated anymore, I feel like in your older age that you become a legend in your “own” mind. That’s a joke that my former teammates, friends, and former competitors say quite a bit. We always have a great time saying that. Being a wrestler at any level, when you are done competing, I think you will always have that edge of “Im tough” even when you physically can’t do it anymore. That toughness carries over in much of your life and helps you immensely get through things, good or bad.

My advice to other dads.. let the coaches coach and just sit in the stands and enjoy watching your child wrestle. It’s the best thing there is.. being a dad.