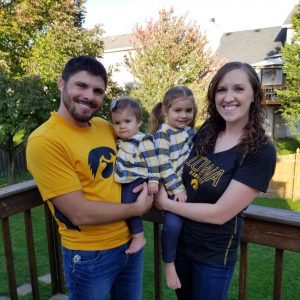 I remember when Dustin Gieselman began wrestling. He was a member of the Mepo/WB-ND youth program that was run by my dad and Jim Drain. We were excited when he went out for wrestling, for he comes from a family of natural, versatile athletes such as his uncle Rod Storch and his brother, Nick. It was awesome the way he bought in to the sport from day 1 and never looked back and still hasn’t, given the contributions to the sport that he makes to this day.  He was a fun kid to have in the room and a guy who everyone could look up to and vital in the early stages of WB-ND wrestling in terms of providing WB-ND wrestling with a foundation of a core group of several very, very good wrestlers.  Along with WB-ND, he has helped out with other programs as well, such as New London and most recently, Davenport Assumption and has always done a great job with that.  Dustin is a wrestling “lifer,” who will likely always give back to the sport. Wrestling is lucky to have guys like him.

It’s difficult to pin point one particular high point. I would have to say my whole Junior season. Making it to State for the first time, knocking off two higher ranked wrestlers to make the semis, and medaling. That’s when I realized how close I actually was. At that point my training completely changed for the best.

Everyone who has wrestled goes through a great deal of adversity in my opinion. This sport is very demanding and if you don’t put your best foot forward every time out you’ll get dinged somewhere down the line. I feel I struggled cutting weight the right way. My Senior season I struggled a bit. Through the last few weeks of football I started to work on shrinking my body. Coming in, I was preseason #1 ranked and knew I had a great shot and was the favorite to win 119lbs. Colton Moore and I worked hard to get down to 119lbs and 125lbs. I ended up making weight for the pinch test, but wasn’t hydrated enough during the test. At that point I had a conversation with the coaching staff and they thought maybe 130lbs. I ended up at 130lbs, but then struggled mentally knowing I wanted to wrestle 119lbs. I ended up medaling that year, but never got what I worked so hard for.

The most upset I ever felt after a loss. I can think of 3 instances. My Senior season as stated above was a struggle. I think Brandon Ball of Columbus Junction beat me 4 times that season in close matches. This was tough each time out. Now the other two were worse. The first round at state in 2007 I drew the #2 wrestler Cole Dieke from Hampton Dumont. I took a bad shot and got pancaked. At that moment you realize you will never be a State Champion. After battling through the backside of the bracket I lost again in the medal round losing my last high school match. These were very hard to swallow.

How cool was it being one of WBND’s first hammers in their history?

Wrestling at WBND when I did was a blast. I do absolutely take a lot of pride in being up there with a few hammers at WBND like Chris Johnson & Zac Gayewski. I would watch these two and try and take a little piece of their wrestling and make it my own. When I went through I had terrific partners. I got to wrestle Sam Newkirk, Colton Moore, Marcus Miller, and Stewart Holloway. A good wrestler always has great partners.

I never had a family member wrestle.

If your brother Nic would have wrestled, how well would he have done considering how athletic he was?

I think if my brother Nic would have wrestled he would’ve been up there with the best. I know how he trained and how athletic he was. There’s just not a scenario where he couldn’t of won. Unfortunately, WBND started wrestling his Sophomore year and he felt it was too late at that point.

I had quite a few rivalries in high school. To name a few Jeret Chiri, Travis Hargrave, Brandon Ball, and Jordan Flory.

Was WBND competitive. Well we had a solid core of guys, but never made a good run. With me, Sam Newkirk, Colton Moore, and Stew Holloway we did ok in tournaments. We never did much in duals.

How would I describe my wrestling style? I would say I had a lot of athletic ability. I would get in a few situation and have to depend on being athletic to get out of certain spots.

I did. After high school I went on to wrestle at Iowa Central Community College. I thought about finishing out my four years, but instead decided I needed to move on.

Wrestling has shaped my life in the most positive way. The way I conduct myself and work ethic. I learned how tough wrestling is and going through life I always compare life to wrestling. Like Dan Gable said “Once you’ve wrestled everything else is easy”. Life isn’t easy and without wrestling, it’s harder. For the past 6 years I’ve worked at Crescent Electric. I work in Estimating and Project Management for Switchgear. I am still very much involved with wrestling and that will NEVER change. I help out at Davenport Assumption High School and I also officiate. I feel I owe the sport of wrestling a lot for what it’s done for me.

Would you like to give a shout out to some of the kids that you have coached over the years?

Would I like to give a shout out to kids I’ve coached in the past? Heck YEAH! Sawyer Farris, Colten Mertens, John Behrens, Matt Robertson, Julian Broderson. I could go on and on here.

Heck yeah I would love to have a match with anyone again. It would be a blast!