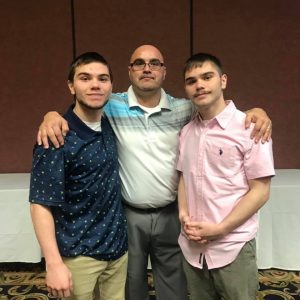 I have two boys, Justin and Joshua Portillo.

How have they done in the sport?

Their story in wrestling is still being written.  They have done very well, as Josh was a 3x state champion and Justin was a 2x state champion. In college, Josh is a current 2x All-American, national finalist, and Elite 90 winner for the University of Nebraska-Kearney in NCAA Division 2.  Justin is also a 2x All-American and had a 3.9 GPA for Grand View University in the NAIA.  Both have two years of eligibility left in college!

It has been a big family tradition, ranging from my brother-in-law, cousins, nephews, and more!

The parents that support their kids are the same, there is always the diehards and the bonds within the wrestling family are always tight no matter where you go!  Ohio is scarcer in wrestling even though is it much bigger than Iowa.  In Ohio, it is mainly northwest and northeast Ohio where a lot of the talent is concentrated.  But Iowa is completely a wrestling state, no matter where you go!

There’s been so many…. I think for Justin, one of my proudest moments to this day happened his 8th grade year.  He let a kid with Autism beat him in a match after the kid kind of got beat up on all day.  Nobody had to tell Justin to do it, and he just felt like it was the right thing to do.  The best part of that is that Justin didn’t even tell me he did that, I had to find out from another parent!  Some things are more important than winning…. For Josh, him being selected as the Elite 90 winner this past year is amazing.  The award goes to the national qualifier with the highest GPA of all.  I have always preached that there is much more to life than just wrestling, and seeing Josh dominate academics AND wrestling at the same time is something really special.
Do you like how the sport has shaped your kids as individuals off the mat as well as on it?

Absolutely!  The discipline and staying humble and showing that hard work truly pays off in the end are very hard concepts to teach, and you cannot be successful in wrestling without those.

How cool was it that your sons were part of a couple of the most anticipated state matchups their first year in Iowa during the infamous Portillo vs. West twins showdown?

Well as you know, that rivalry had a good end on our part, and also a bad end.  Regardless of how the matches ended up, the West twins really pushed my boys to another level.  The competition is something that really drives people.  It is really cool to have identical twins vs. identical twins at the same weight class on that high of a level!

What do you have to say about the CGD wrestling program?

Clarion-Goldfield-Dows has an amazing support group and wrestling is a huge tradition around the town.  Looking forward to what lies ahead for CGD’s team, might surprise some people this year!

It’s really hard to narrow it down to just a few people.  All of their coaches have not only impacted them on the mat but also in life, teaching many intangible life philosophies.  From their youth coach Gary Burgess at East Toledo wrestling club, to Kurt Morgan and Dan Gabrielson at Clarion-Goldfield-Dows, Carl Valley of Team Valley (their club coach in Iowa) to Nick Mitchell (GVU) and Dalton Jensen (UNK), all of these coaches have focused more on developing mature men on and off the mat, more so than just grooming wrestling skills.

I never really noticed a “jump” in their wrestling game.  There was never really a huge change in levels.  Even when Justin went from a 3rd-string backup to a state finalist, he was just stuck in a tough line-up behind his brother and a Fargo All-American (The three of them went on to finish for 7 out of 9 possible state championships the rest of their high school careers).  I have just been around them their whole lives and I see the constant improvement, so it never comes as a surprise to me when they continue to excel.

How do you like the state of Iowa in general? Nice people?

I love the small-town living!  There’s not so much hustle and bustle. Time slows down enough to enjoy the little things in life.  Not having to worry about things like traffic and sirens is very nice.

Yes, I played baseball for my high school, usually shortstop or second base.  I used to play basketball casually and would always destroy my brother in it (and still will if I have to, lol).

Besides the day I got married, and the days each of my kids were born, it might be the next highest favorite memories.  Watching my sons compete with passion and drive and all of the road trips around the country has delivered so many wonderful memories that I will always cherish.

For starters, always remind your wrestlers: no good grades, no wrestling!  When you are starting your kids off at a young age, keep it fun!! Enjoy the car rides and conversations; the stuff that doesn’t have anything to do with the actual wrestling.  We don’t necessarily remember every match we wrestled at every tournament, but we remember all of the laughs, deep talks, jamming to good music and other fun stuff on those trips.  Also make sure the kids are wrestling for their own reasons, and not for anyone else.  Remind them that, as a dad or mom that win or lose, you will always be there for them.