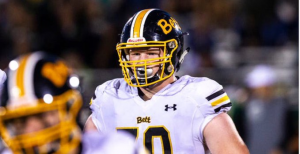 This is the first of what I hope becomes a ton of articles where we will interview and give shout-outs to wrestlers who excel in multiple sports. It’s a good look for wrestling, for chances are, wrestling probably helped them with other sports.

And who better to start with than Griffin Liddle, from Bettendorf. He is a hot topic right now, for he is a sought after recruit who recently committed to the Iowa Hawkeyes to play football. He is a kid who has been widely considered a guaranteed D1 football player since he was an underclassmen. Griffin provided us with some insight, wise words and personal stories.

What sports do you play?

I wrestle and I also play football. I feel like I have done decent in both but I am far from what I really want to accomplish in both of them.

How have you done in each of them to this point?

As of right now in football I have been named all state on both sides of the ball, 1st freshman to start every game at Bettendorf and so on, made it to the semifinals the last 3 years in a row, all district team the last 3 years, 1x team football captain. In wrestling I am a 2x state place winner (5th and 2nd), Clash all tournament team, Iowa freestyle and Greco State champ, 2x Fargo AA (2nd freestyle, 4th Greco).

So you committed to Iowa recently to play football. Was this a difficult decision?

Committing to the University of Iowa was not that hard of a decision. It was more of a calculated decision then a difficult decision.

Will it be easy to leave wrestling behind after your Senior year?

It will pretty hard due to the fact I will never have high school wrestling ever again with all of my teammates but Iowa football should keep me very busy.

No, be an athlete first. When you’re older you can specialize on things but in youth and high school enjoy time with your teammates because you will never get that time back. It means a ton to have a family that supports you and is with you at all times.

I’ve met some of your family and they are great. Very proud of you, very supportive. How much has that meant to you?

It brings positivity and joy to helping me do the sports I love.

How has your skills you picked up wrestling helped your football game?

Wrestling has physically helped me with my hand on the offensive and defensive line and mentally teaches you how to be tough and fight through hard situations.

Has football helped your wrestling game?

Football has helped me with wrestling because of leverage, leadership, and being a better teammate.

Not too much, I am just a task at hand kind of person so I am just worried about finishing my high school career on a good note and in college as well.

The best memories are anything with my teammates and building relationships with people around the sports too.

Would you like to give a shout out to any coaches or mentors that helped you reach the point of being a D1 athlete?

Any coach that has come in contact with me has helped me out. I don’t want to single any of them out because they have all helped me in some kind of way.

My family really isn’t athletic at all but they have a drive and mindset that helps them.

I’m really excited for the season to start and I am looking one match at a time.