Who Is The GOAT?!?! The Case For Drake Ayala, Fort Dodge HS ‘21/Sebolt Wrestling Academy/Iowa Hawkeyes 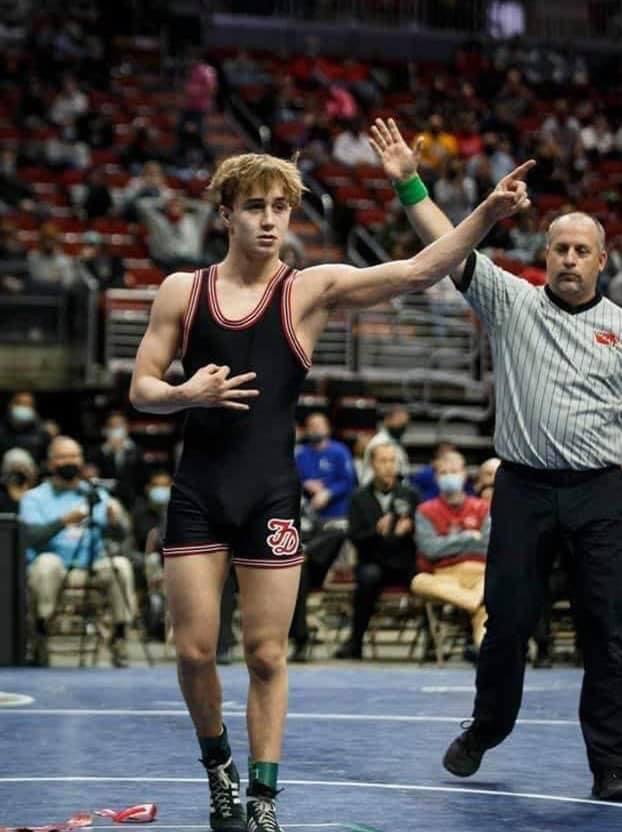 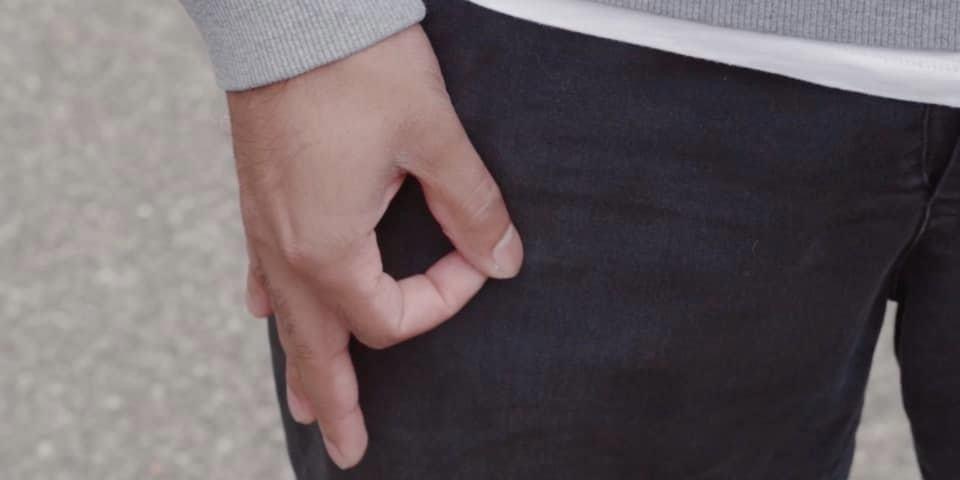 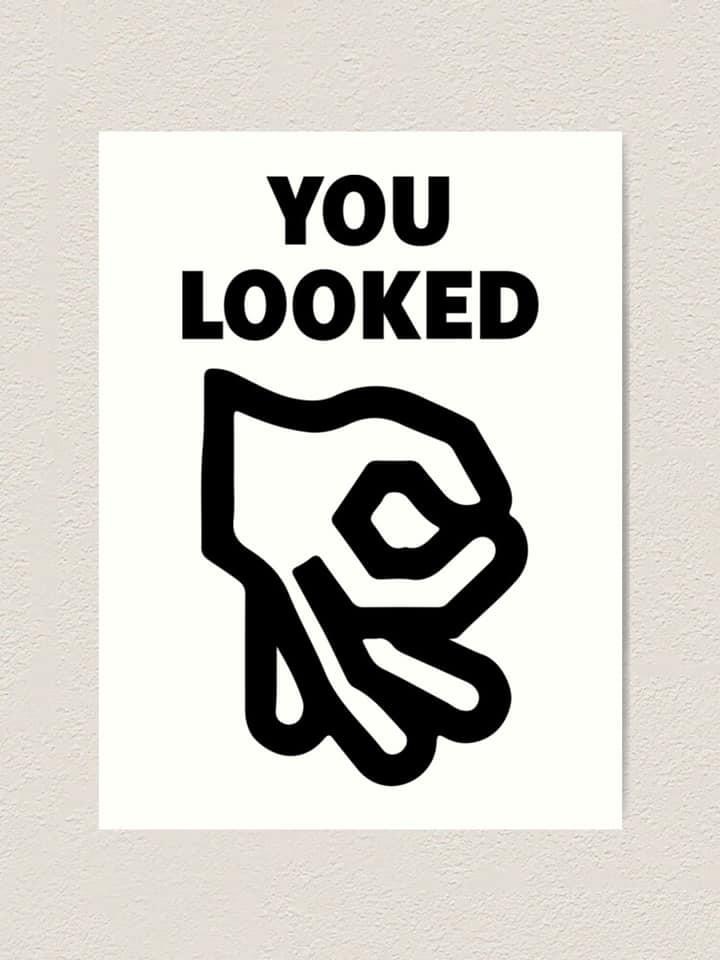 At the Iowa HS State Wrestling Tournament of 1994, the #1 ranked guy at 3A 125 coming in was Fort Dodge’s Sam Ayala. Ayala was a state qualifier at 3A 125 as a Junior the year before and won a match at state that year, but lost in the quarterfinals and eventually was eliminated from the tournament. Sam came in to the 1994 state tournament with an undefeated record of 30-0 and looked to be in good position to make the finals, for nobody on his side of the bracket had a season record that was close to being as good as his. Everyone had anywhere between 3-12 blemishes on their record coming into the tournament. His first round opponent, Tuan Pham of Ankeny came in with 11 losses. 4 of those losses were to Sam during the regular season. So, it was fair to assume back then that Sam would be perfectly safe that first round, but a thunderstorm chose a pretty awful time to start raining on Sam’s season, for he lost his first round match to Pham and was beaten out of the tournament a round or two later. Sam ended his HS wrestling career as a 2X state qualifier who had the potential to be a state placer, if not a state champion, but it just wasn’t in the cards for him. With the heartbreak that weekend presumably caused for Sam, he probably had fleeting thoughts at the time of never wanting to see a wrestling mat again or at least never wanting to attend a wrestling event in the DM area again, for all it would do is remind him of his own shortcomings. It probably never occurred to him at the time that some of the best moments of his life were down the road and that many of these moments would take place at the state tournament, the very tournament that gave him so much heartbreak. With that said, Sam’s son, Drake Ayala wrapped up his HS wrestling career a couple weeks ago and it was one of the most impressive runs that any Iowa HS wrestler has ever had. Drake accomplished some things at the HS level, that no one from Iowa has ever done before. Sometimes, it’s cool to observe how time finds a way to heal old wounds for people. 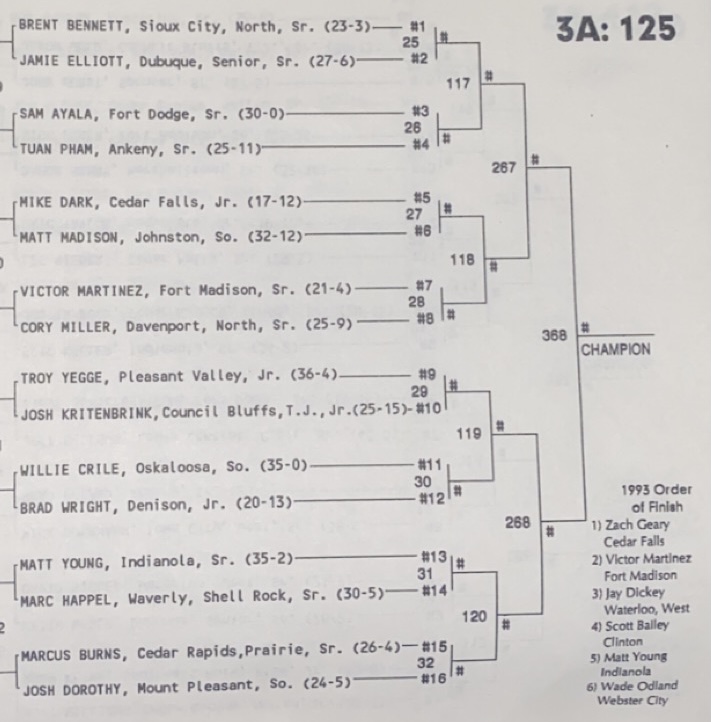 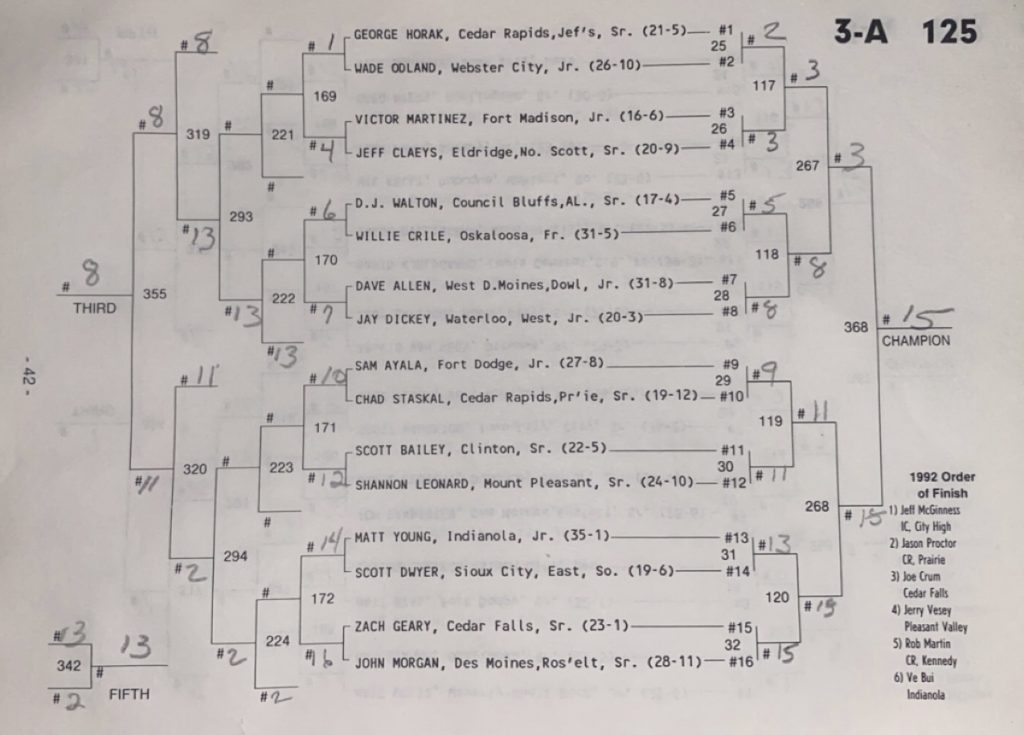 Drake Ayala is the son of Sam and Angie Ayala and had two younger brothers, Dru and Knox who also wrestle. The first few years Drake wrestled, he was “pretty good.” He would place in the top 3-8 or so most years at AAU State. He had a year or two where he was eliminated. There were a couple years where he won USA or GSS State… All the way until his 6th grade year, he was a good wrestler in his class, but by no means one of the top dogs. 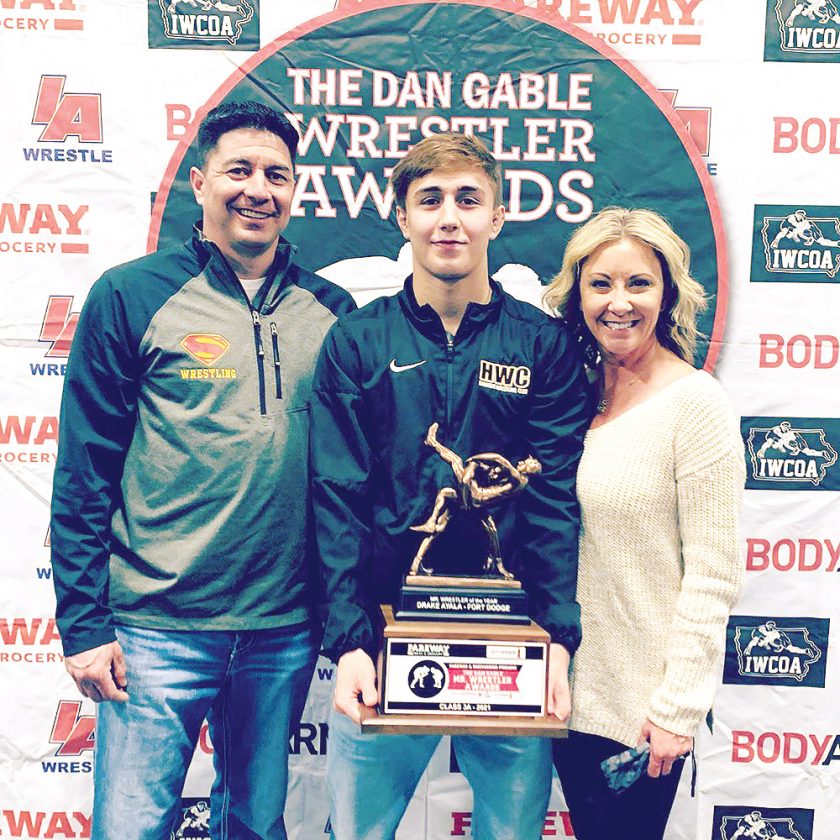 I believe it was around 5th or 6th grade where Drake became a very dedicated member of the Sebolt Wrestling Academy… this may shed some light on why Drake started making leaps in his wrestling game when he did. 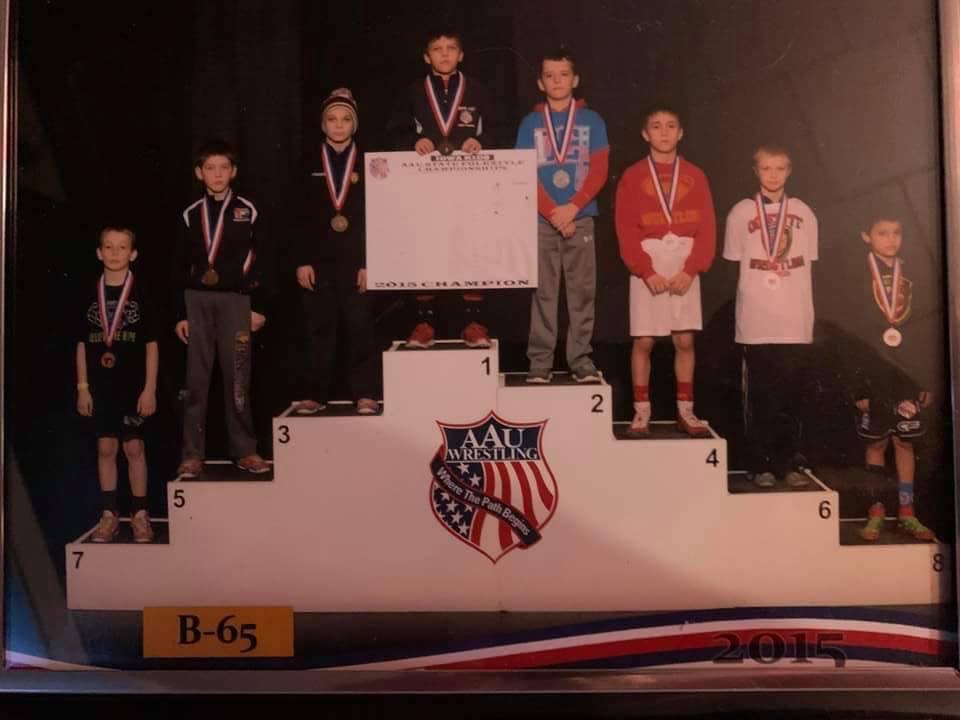 When Drake was a 7th grader, he accomplished something that until that point, he had always fallen short of. He won the AAU State Championship at division C-75 lbs. And this was just the start of a reign of mat-terror that eventually led Drake to the realm of “historically good HS wrestler.” As a 7th grader, Drake was still losing matches here and there and was barely getting by in some close matches in some of the matches he did win, but he had officially gotten the AAU State monkey off his back and it was all uphill from there. In fact, it was set on a steep incline.

Drake’s 8th grade year is when we saw him really start taking form of the utterly dominant Drake Ayala that we have all become accustomed to. It was around this time where Drake started winning pretty much every big tournament that he wrestled at. And he was wrestling on both, state-level and national-level stages. The biggest, most prestigious stage came during the summer of his 8th grade year and Freshman year of HS. Drake Ayala became the 2017 Fargo Cadet National Freestyle champion at 88 lbs. The Iowa wrestling community saw the writing on the wall with how good he was becoming, but the Fargo Cadet National Championship officially put Drake on the map as an elite-level wrestler on a National scale. Drake was one of the best wrestlers in the country and the party was just getting started. He still had an entire HS career to wrestle yet.

As a Freshman in HS in 2018, Drake was an undersized 106 lber, but this didn’t seem to affect him much, for he had a borderline flawless Freshman season in which he finished second at state. He lost to the finals to his practice partner at Sebolt Wrestling Academy, Cullan Schriever of Mason City, who happens to be another one of the best wrestlers the state of Iowa has EVER produced in his own right. Drake finished his Freshman campaign with a record of 41-2… both losses coming to Schriever. 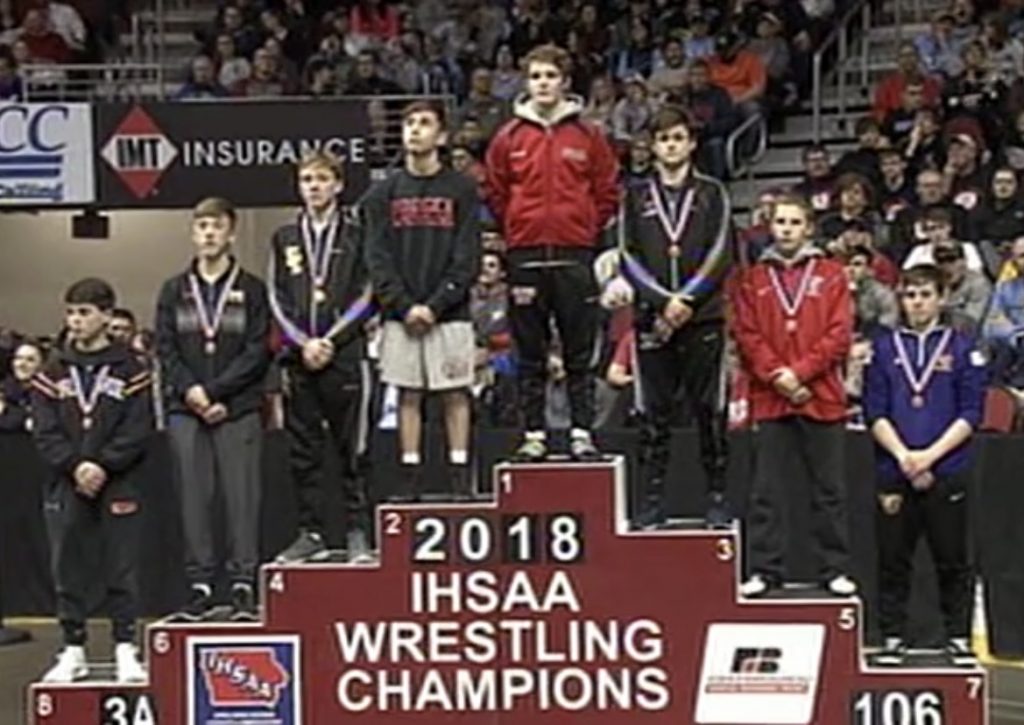 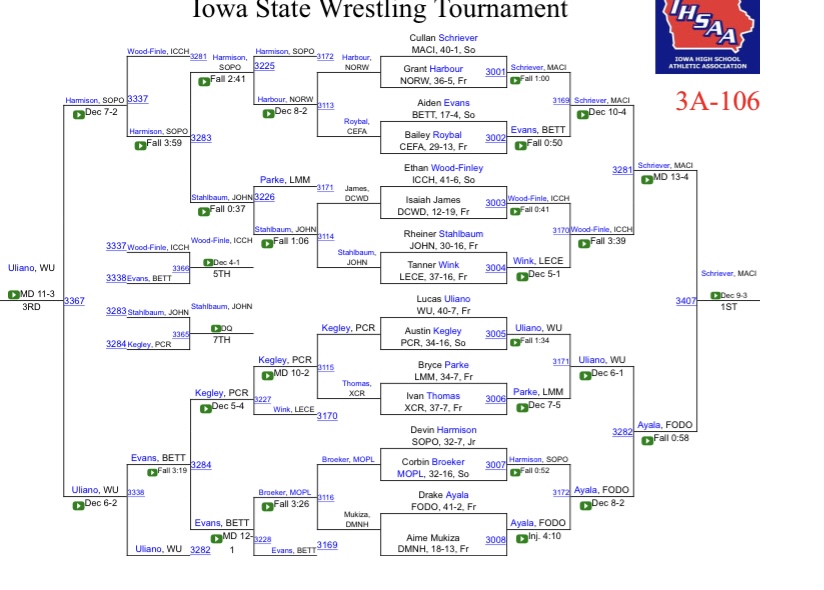 In 2019, as a Sophomore in HS, Drake Ayala was at an even higher level than the already astronomical level he was operating at the year before. Drake pinned or tech-falled everyone he has wrestled that year with an exception of now 2x MN state champ, Joey Thompson of Totino-Grace who he defeated 5-4. He pinned or tech’ed every wrestler he faced from Iowa. He won his first state championship this season and pinned 2 guys and tech’ed two guys at the state tournament on his way to the title. 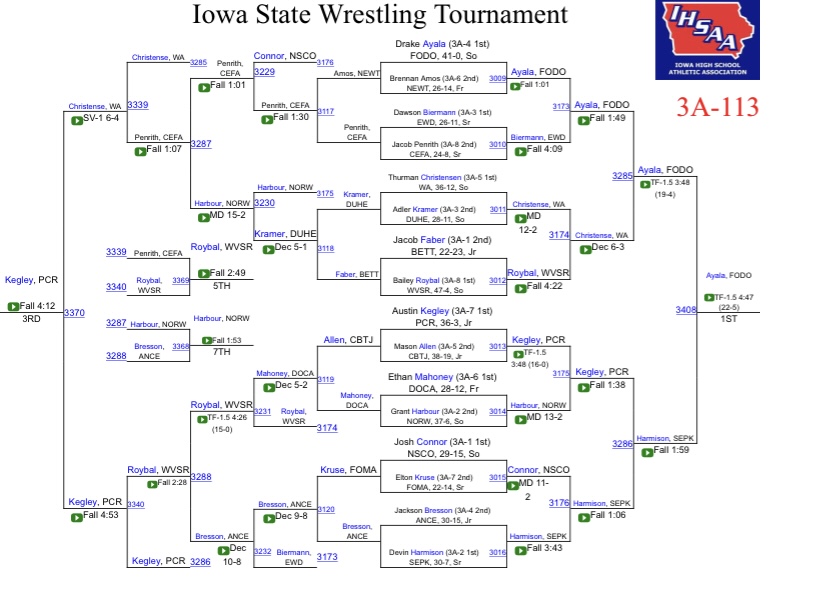 In 2020 as a Junior in HS, Drake became an undefeated state champion for the second year in a row. Drake went 45-0 that season, pinning everyone he wrestled at state in the first period with an exception of his 1st round opponent, who he teched halfway through the 2nd period. Of the 45 wins he had that season, 43 of them were either by fall, technical fall or major decision and 40 of them were by fall or technical fall. All 5 guys who managed to not get pinned or tech’ed by Drake were from out of state. This meant that Drake Ayala, for the 2nd year in a row, either pinned or tech’ed every in-state opponent that he faced. That’s incredible and I have no clue if it’s ever been done before. 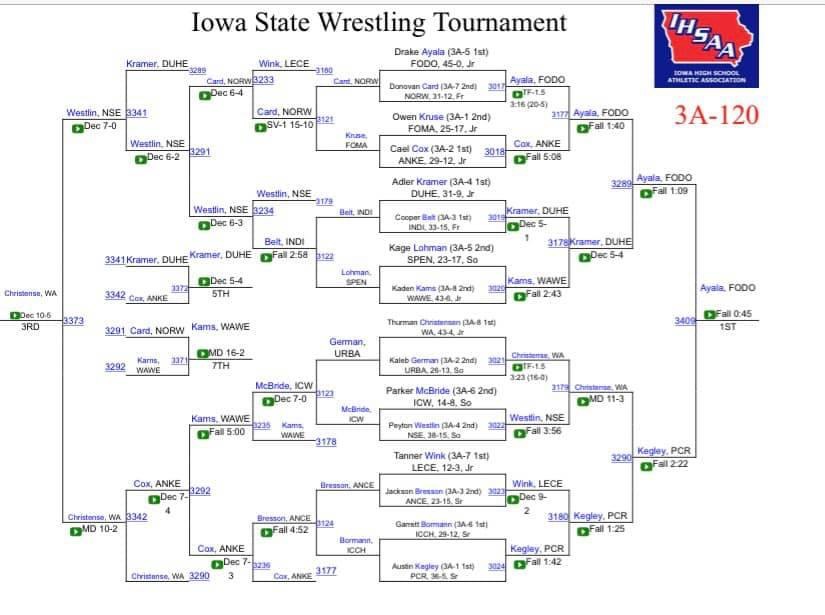 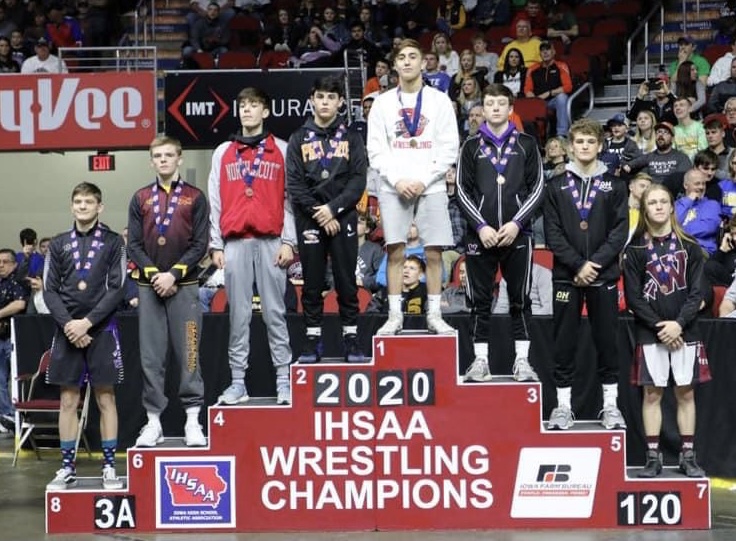 As a Senior in 2021, Drake continued his dominant ways and ultimately became a 3X Iowa HS state wrestling champion by the time he finished. However, his season wasn’t perfect… which was interesting, for Drake had reached a level at this point where fans were basically expecting perfection from him. Drake had a match at the Rick Caldwell Invite where he bumped up a weight to wrestle one of his teammates from Sebolt Wrestling Academy named Ryder Block, a Sophomore from Waverly-Shell Rock who won the 3A 106 state championship the year before as a Freshman. Block grew all the way from 106 to 132, where he was ranked 1st in the state and was completely dominant all season long. Ayala, being ranked 1st in the state at 126, presumably bumped up to wrestle Block, for it isn’t often for someone like Drake to have the option to wrestle someone who is actually capable of giving him a good match. And Block gave him that. In fact, Block shocked the nation when he defeated Drake by a score of 9-7. This win put Block on the map in a huge way. With only a few weeks remaining in the season, it didn’t appear that Drake would ever get a chance to avenge the loss to Block since they were at different weights, but Ayala being the competitor he is with something to prove, ended up unexpectedly weighing in at 132 lbs at districts so he could attempt to have a rematch with Block at state so he could avenge the loss. His plan was executed perfectly, for Drake dominated his way to the state finals for the 4th time, where Block awaited him. This time, it was Ayala who got his hand raised. Ayala major decisioned Block in the state finals by the score 11-3. He finished his HS career as an utterly dominant 3X state champion with a career record of 171-3. He was named as Iowa’s Bob Steenlage Wrestler Of The Year twice, winning the award as a Junior and Senior. 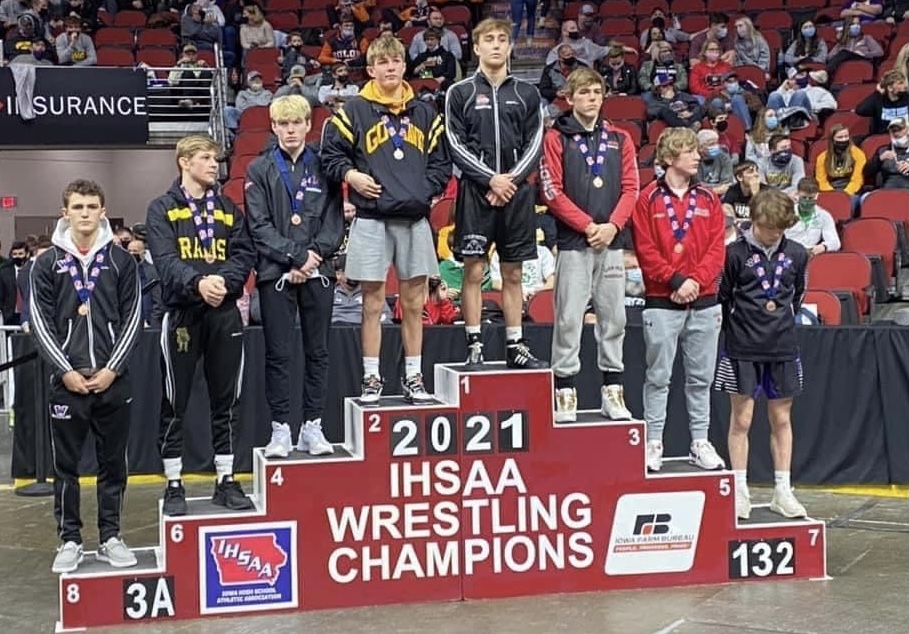 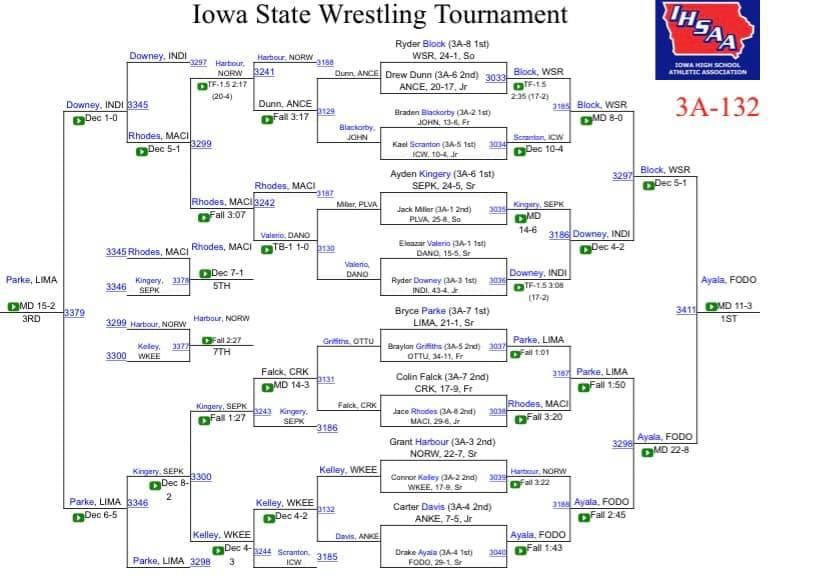 Although Drake Ayala had one of the most dominant runs in his HS folkstyle wrestling tenure, that isn’t what sets him apart from the rest of the pack in terms of determining if he has a case for being Iowa’s GOAT HS wrestler. What sets him apart are the off-season accolades vs. National competition. To start, Drake won the Super 32 Challenge this past year…a feat that only one other Iowa HS wrestler has accomplished, which was ironically Cullan Schriever. Drake also beat California wrestling star, Richie Figueroa 5-3 at the “Who’s No. 1” wrestling meet. He also won 3 Fargo National Freestyle Championships. He won 1 as a Cadet and the other 2 as a Junior. 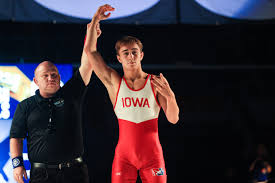 Drake committed to wrestle collegiately for the Iowa Hawkeyes and I, for one, could not be more excited about that. 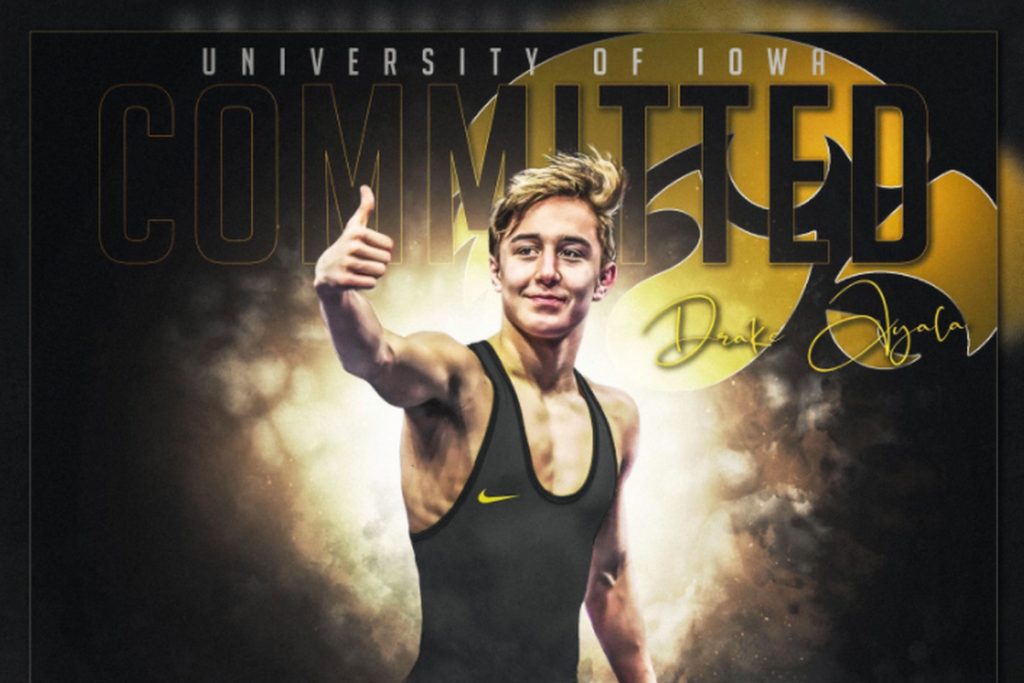 So does Drake Ayala have a case for the Iowa HS wrestling GOAT?!?  Haha, I don’t think anyone in the right mind would say that he doesn’t.

Next post: PinDox Presents: How Pat Downey III Got Wrestling Down Pat