Epic Matches In Iowa HS Wrestling History: Jeff Gibbons of Ames vs. Steve Knight of Clinton (Along With The Battle That Led Them To The Finals) 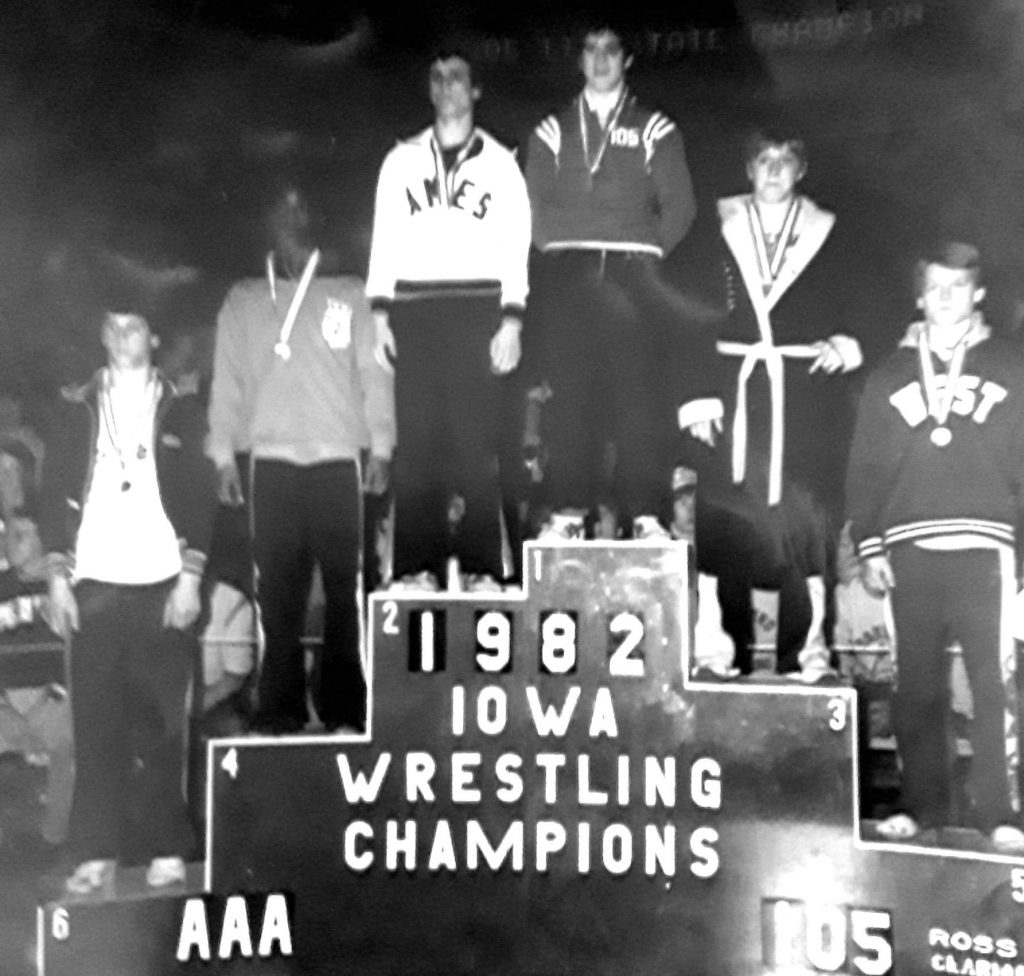 One of the deepest brackets in terms of talent in the history of the Iowa High School State Wrestling Tournament took place in 1982. Specifically in the 3A 105 lb. bracket. This is nuts. Check it out… these are the placers for 1982, 3A 105….

Tough bracket, eh? Heck yeah it is. The top 5 guys went on to compete at the D1 level and put together highly decorated careers. A couple of them are widely considered amongst the greatest Iowa HS wrestlers ever…

Steve Knight won his first of 2 titles in this tournament. He was also accomplished in the Freco scene. He had a year where he was named OW of both the Freestyle and Greco National Tournaments. He was an AA for Iowa State and even coached there as an assistant to HC Jim Gibbons…the brother of the man he met in the finals, Jeff Gibbons.  Jeff was a 3X finalist in HS, 2X champion. Jeff was also a Freco National Champ and was a 2X AA at Iowa State. He is the younger brother to 4X state champion, Joe Gibbons (as well as Jim and Tim) and Steve Knight is the older brother of 4X state champion, Dan Knight (younger brother of Jeff). Chuck Pearson was 4th here & a state champ in 1984. He was a DII qualifier for Morgan State. Knight had him 1st round here in ’82. Chuck made the Iowa Jr. team a couple years. Alan Paradise of IC West was 5th here & a PAC 10 champ in ’87 or ’88 for Cal State Bakersfield. Brian Waddell was 2nd string at UNI to Pat Pickford one season & then was a 3 year starter for the U. of Montana. He was 2nd twice in the Big Sky Conference & 3rd once…he just missed being an NCAA Qualifier twice by one wild card vote. Back then the DI Western Wrestling Conferences weren’t allowed many qualifiers. 8 teams & the 10 champs went & just 2 qualifiers..Brian & a lot of good guys shoulda been competing at NCAAs. Derrick Woods was runner-up to Pearson in 1984.

This bracket had it all. It had 5+ guys who went on to wrestle at the D1 level. It had two guys who were brothers of 4X state champions (Steve Knight and Jeff Gibbons) and by the time them and their brothers completed their careers, they solidified their spots as being members of a couple of Iowa HS wrestling’s most accomplished siblings ever. Those two happened to meet in the finals. It had upsets. It had multiple offseason world-beaters clashing against each other. It had comeback from behind wins.  It had several OT matches. It had everything you could ask for.

AND IT DIDN’T BEGIN AT STATE! A couple of the toughest guys in the bracket met each other at districts…. The eventual State Champ of the bracket, Steve Knight and 3rd place finisher, Brian Waddell met at districts. . Steve placed 6-SQ-1-1 at state. Waddell went SQ-4-3 at state…And it had a scenario prior to the tournament taking place in which one of the best guys at the weight (and returning placer) did not even make it out of districts because of being defeated by Knight and Waddell… His name was Jack Engelken and he was a returning state placer.  Jack didn’t go out quietly, either… In fact, the guys who placed 1st and 3rd in this bracket were damn lucky to not be beaten out by him, for he had both of them on the ropes… Read what 3rd place finisher (at state), Brian Waddell had to say about that:

Brian Waddell: Me and Knight almost didn’t qualify for state in ’82. We had a guy named Jack Engleken in our bracket. He was something like 26-0 and was 5th the year before at 98. I had him in the semifinals. He was beating me 6-2 with less than 20 seconds left in a row the match. I hit a five point Granby cradle and won 7-6. I upset number one seed Knight in the finals 9-6. That gave Engelken a shot at true second. The match went down to the wire with Knight winning by a point or two. He was a top guy in state who didn’t qualify his senior year.

Sidenote: Brian Waddell beat Steve Knight at the Bett Holiday Classic in Dec. 1981 9-5. Knight beat him in the dual 8-6, & then Waddell beat him again at the Clinton District 9-5 again!! 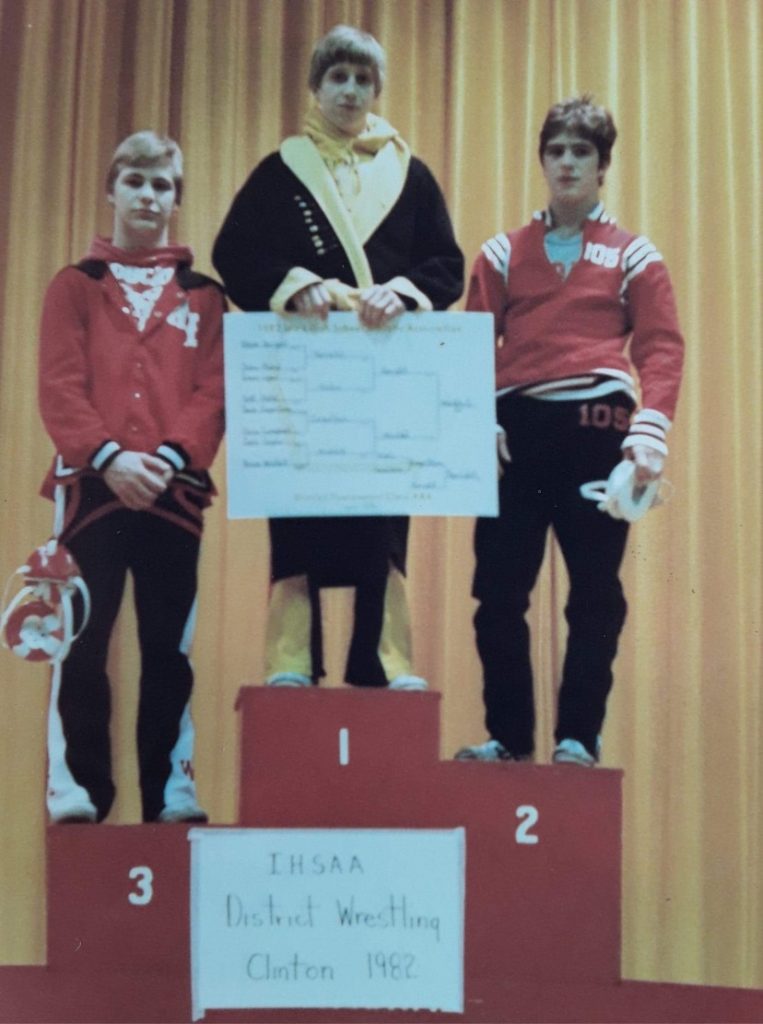 Here is a picture of the granby Waddell executed to win the match at the end: 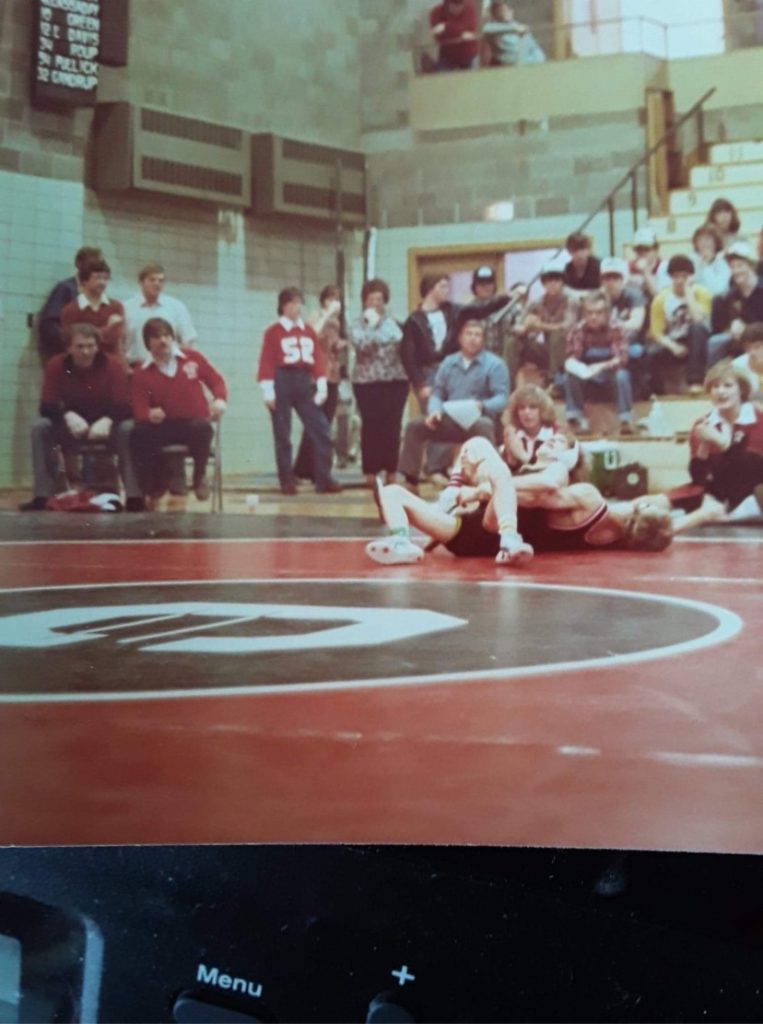 Here is a picture of Brian Waddell from Bettendorf and Steve Knight from Clinton wrestling in the finals at districts: 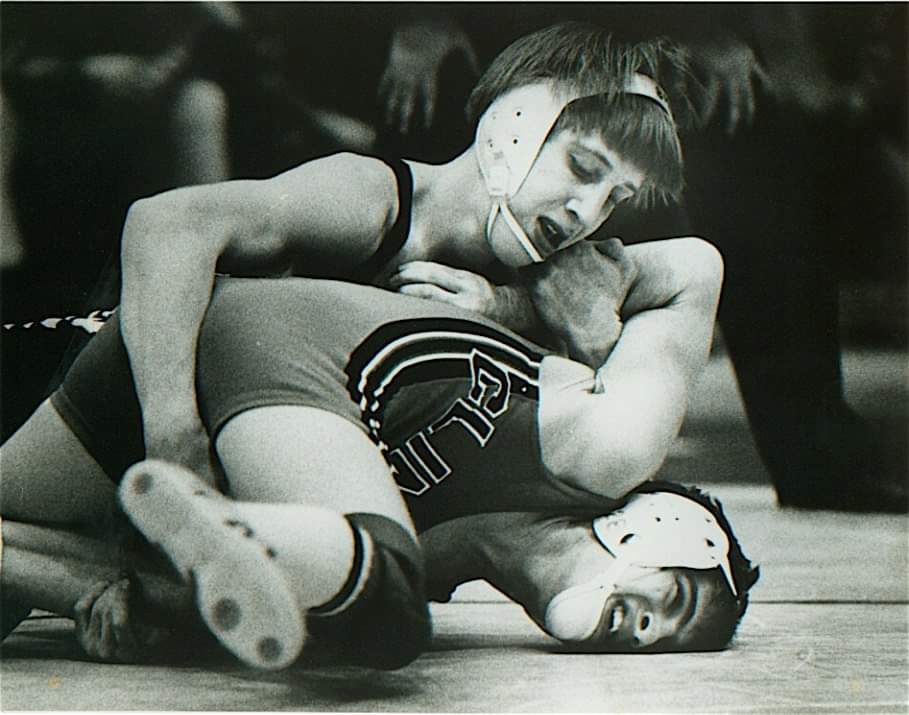 So after districts, it was on to state, and here is how the bracket looked: 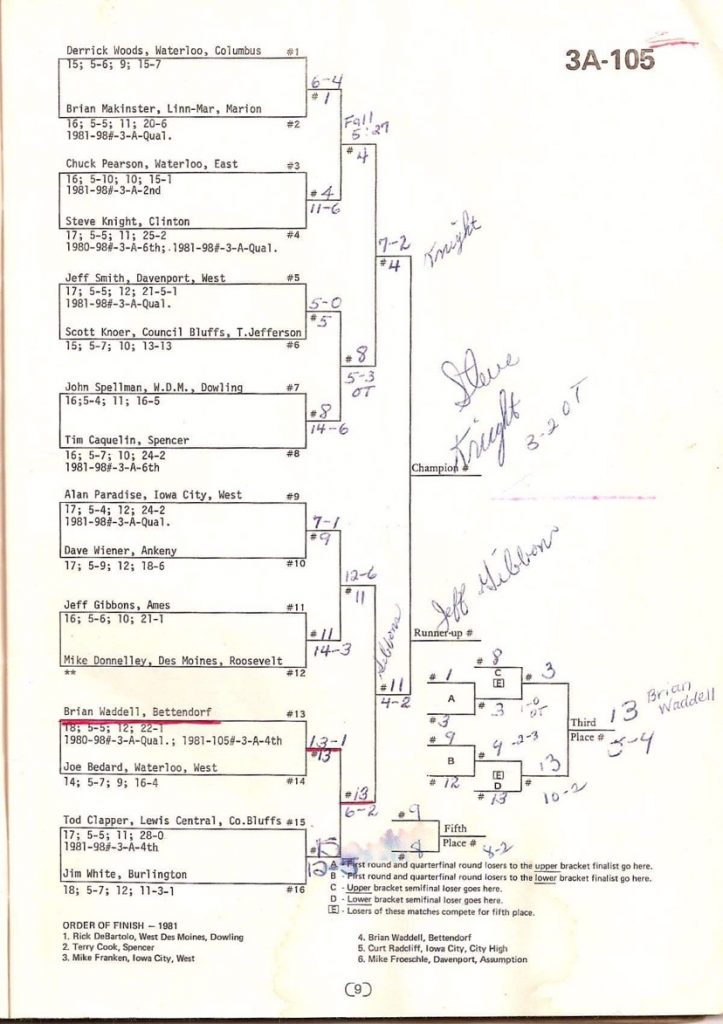 As you can see, Waddell was edged out in the semis by Gibbons and finished in 3rd place… which set up an epic finals match-up between Jeff Gibbons and Steve Knight…two guys whose careers would end up having parallels with each other in the future. It’s only fitting that their match was one of the best shows ever put on by 2 wrestlers at Vets Auditorium. This is one of the best matches you will ever witness and it’s between two of the best HS wrestlers to ever come out of Iowa!