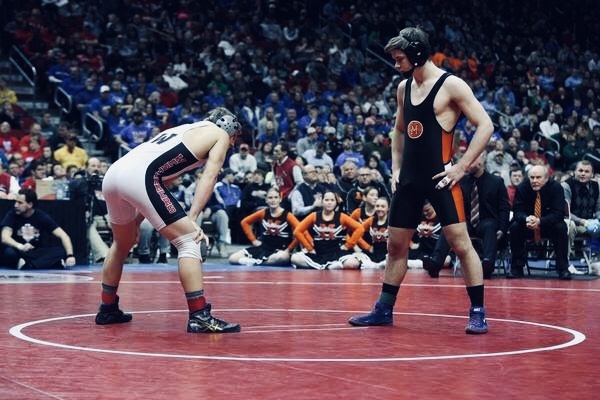 This one started out as an email exchange with someone and myself. This person asked me to explain how Brennan’s Senior season went down and eventually we discussed it so much that I had enough for an article…and it just happens to fit the criteria for one of my new series about the best matches in HS wrestling history.

So this match may be THE most heartbroken the Swafford clan has ever been following a loss that any of us 4 brothers had. Brennan is the youngest of us 4 and probably the best of all of us…he’s most certainly the most naturally athletic of the 4 of us… Kid was an NAIA National Champ last year as a Sophomore and he’s there on a football scholarship if that tells you anything. Brennan was good, pretty much from the day he started at age 5. With Brennan, he caught in to every sport he played immediately from a young age and it seemed like everyone from the area just kind of considered it a foregone conclusion that he would probably win 2-3 titles when he got into HS. There was absolutely no doubt in my mind that he would do it and reality didn’t set in that this wouldn’t ever happen until the last 5 seconds of this match vs. Henrich when his legs gave out on him. This loss was indescribably painful for us and we couldn’t believe that in decades of us Swafford bro’s wrestling that this was our family’s farewell from Iowa HS wrestling…it was just brutal. There were a lot of tears that night. If it weren’t for Brennan winning NAIA Nats last year, I would likely have a hard time talking about this match still today.  Fortunately though, time has granted me with an ability to see this for what it was….This match was legitimately one of the best matches I’ve ever seen in the Iowa HS State Finals. 4 lead changes, constant action, down to the wire, etc… It had everything a fan could ask for.

Funny thing was, although it was a state finals match, it wasn’t exactly watched by very many people.  Ya see, at the same time and on the 3A mat, the guy who was trying for his 3rd state title was someone named Nelson Brands.  Nelson is Terry’s son and all of us know about the Brands twins.  They have been wrestling celebrities for decades. Most of Iowa LOVES the Brands twins as they should and when Nelson took the mat, it made the general spectator straight-up giddy to watch him, for they felt like they were reliving the days of his dad by watching him since their styles are so similar.  Sure, Brennan probably had most of Southeast Iowa watching him and Henrich likely had most of NW Iowa watching him, but the common spectator…I’d say that 90% of them would prefer to watch Nelson Brands over anyone in the building. It doesn’t even matter if he’s expected to have an easy or difficult match… people tune in because he is a Brands and they love him for it. So if you are competing at the same time as him, unless you are wrestling against him, the attention is likely not focused on you.  Most of it will be on Nelson. Nothing wrong with that, for it’s not like the kid ever disappoints.  And man, did the overwhelming majority of people who watched Brands destroy his opponent ever miss a good one in 1A between John Henrich of Akron-Westfield and Brennan Swafford of Mepo.

And on paper, really…fans should have seen a barn-burner between those two coming.  The writing was on the wall. Check this out:

* John was undefeated on the season coming in and Brennan had one loss to Nelson Brands first weekend of the season. Coming into the match, both guys pinned almost every opponent they faced during the season and at state.

* Both guys had health issues with Brennan breaking his hand in his last football game and then re-breaking it a couple weeks before state. Henrich had some lingering knee or shoulder problems, I believe.

* John Henrich wrestled in Iowa for 3 years. He moved to AW from South Dakota as a Sophomore. He placed 3rd at state in SD as a Freshman. In his Iowa career, he never suffered a single loss and only gave up 16 pts. to opponents TOTAL in 3 seasons… 7 of those points were scored against him in this finals match.

* Brennan had shattered the SEISC record for career pins 2 weeks earlier and notched his final HS wrestling pin in the semifinals against Austin Hellman from Don Bosco. It was his 128th career pin.

* These guys were from completely opposite corners of the state with Brennan being from SEI and Henrich being from NW Iowa. Both won regional awards given by their region’s newspaper, with Henrich being named Wrestler Of The Year by the Sioux City Journal and Brennan being named the 2018 Male Athlete of The Year by The Hawkeye for his accolades in wrestling, football and track.

* They had one common opponent that season coming into their finals match. That was Ryan Schott from IC Regina. He was a returning state qualifier who ended up placing 6th in this bracket. Brennan was up by 8-10 points in the 2nd period when he pinned him in the district finals. Henrich defeated him 3-0 in the semifinals… one of his closest ever matches in HS. We didn’t take much from these two results by means of comparing Henrich and Brennan coming into their match for we knew what the situation was with Schott. There was familiarity with Brennan and Schott. Those two were practice partners that year at the Eastern Iowa Wrestling Club. Henrich presumably didn’t know much about him being from the opposite side of the state. Schott was one of the more underrated guys in the state. A great multi sport wrestler. He likely would have racked up more hardware than he did in HS, but it always came off to me as if he was always cutting way too much weight. There was some log-jammage in the middle weights for Regina when Schott was in HS, so he may not have had much of a choice. Schott was a solid wrestler with a reputation of being good at keeping the match close if necessary and not giving up many points. A 3-0 win over Schott by Henrich was a nice win for him and we knew that. Coe College landed a good one with Schott. He is doing well there and it doesn’t surprise me at all.

* Henrich is one of two wrestlers to win 3 state titles and never suffer a loss in the state of Iowa.  The other one is Dan Gable.  Henrich is the most notable “South Dakota to Iowa” move-in since a guy from SD moved to Iowa to wrestle for The Hawkeyes. His name was Lincoln Mclravy.

* Both are still currently wrestling. Brennan Swafford is wrestling at the NAIA level for Graceland University and so far he is a 2X AA, 1X National Champ. John Henrich is wrestling for Nebraska and to my knowledge, has battled the injury bug.

*  The singlet Brennan wore in this match was the same one his brother Justin was wearing when he won state as a Junior in 2002.

* Both were under a lot of stress and pressure to win, but for different reasons.  John Henrich had a perfect Iowa record at the time and didn’t intend for that to change any time soon, in which it didn’t. He also had to deal with the fact that no matter how much he won or how convincingly, there was always someone there to downplay his accomplishments because he was from NW Iowa and for whatever reason, some people have this belief that NW area guys never wrestle good competition, which is not true. He also wanted to prove to the state of Iowa that he was more than just a “South Dakota boy” and could compete with our state’s best as well as South Dakota’s. He was also a 3rd (I believe) generation wrestler and his last name is synonymous with Akron-Westfield Wrestling because of all that his family has done for them over the years. Brennan Swafford was on his last attempt at a state title. The combined record of the Swafford brothers in state finals matches coming into that one was 1-4 and Brennan wanted to reverse that curse. He too has a last name that’s highly associated with his school’s wrestling program and had a great deal to live up to from the moment he began wrestling.

* I think these two would have been awesome practice partners for each other.

* Both guys were very hard on themselves after the match. Brennan was obviously because he lost. Henrich was upset with himself because it wasn’t a dominant win.  Both guys not only love to win, but they like to be dominant in doing so.  It’s kind of unfortunate that they were so harsh on themselves, for I felt BOTH guys wrestled great and put on a good show for those who watched it. Brennan went hard and fell short. It happens. Henrich displayed great mat-smarts and awareness, did what he had to do to win the match when he had to do it and won a big one. I think all of us will likely agree that neither of these guys had anything to be ashamed of.

Ok, so before diving into that match, I will post their matches from the earlier rounds that year.  For Henrich it will just be a highlight reel that I made for him when we awarded him “Best Of The Best In 1A” at The Predicament. 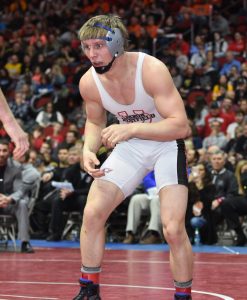 2018 Quarterfinals vs. Ethan Fulcher of Hudson (Fulcher won a title himself 2 years later): 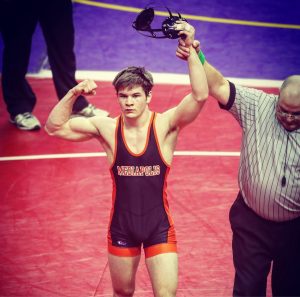 HERE IS THE EPIC 1A 160 STATE FINALS MATCHUP BETWEEN JOHN HENRICH OF AKRON-WESTFIELD AND BRENNAN SWAFFORD OF MEDIAPOLIS. HENRICH WON 8-7 WITH THE DECIDING POINT COMING IN THE LAST FEW SECONDS: 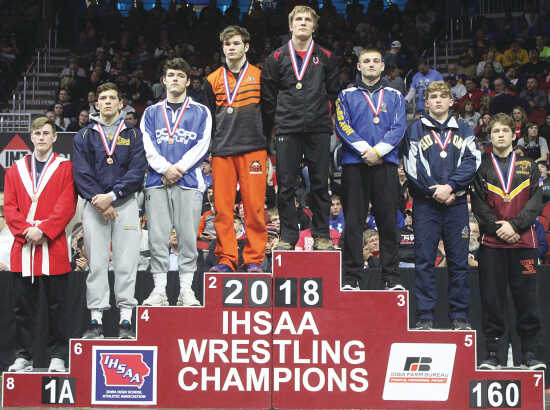 Next post: Funny Wrestling Stories: When My Best Friend Pooped His Singlet While Wrestling At AAU State