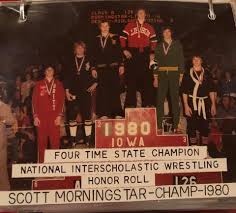 Scott Morningstar became the 3rd four-time state champion in Iowa wrestling state history in 1980, just a year after Jeff Kerber of Emmetsburg became the second. Morningstar’s titles came at 98 pounds his freshman year, 105 his sophomore year, 119 his junior year and 126 his senior year. For his HS prep career, his record stood at an amazing 115-1-1.  He helped establish the groundwork for a new era in Lisbon wrestling winning his first 2 titles under HOF wrestling coach Al Baxter, and then his final 2 titles at Lisbon under the greatest wrestling coach in Iowa High School wrestling history – Brad Smith… where that winning tradition continues today.

Scott Morningstar was dominating throughout his high school career, he was offense minded and scored lots of points, wrestled smart and maintained good body position like all Lisbon taught wrestlers. He was great at punishing his opponents when they made mistakes and was much stronger that he looked. To sum things up, he was exceptional at winning…  Just as you’d expect for a 4-time state champion. Let’s take a brief look at each of his state finals matches.

In the 1977 class 1-A state finals at 98-lbs, the freshman Scott Morningstar beat Vince Kimm a very mature looking senior from Iowa Valley (Marengo) in a close 4-2 match, winning his first state title and finishing his freshman season undefeated at 33-0. His coach commented that his opponent “had a three day growth of beard and looked like he was 21 years old,” and Scott rode that kid out to nail down his victory! Not bad for a kid that was weighing around 97 or 98 lbs soaking wet… It was just the beginning of a brilliant HS wrestling career.

There’s always something special, almost magical about experiencing that first victory and on that grand stage in the “Barn” atmosphere… and this was the year that this young man from Lisbon found himself and experienced his first taste of that magic with a coach that inspired him to cross over that threshold into wrestling history… one that requires championship skills and championship confidence.

Just prior to that 1977 state tournament Lisbon coach Al Baxter was going over details with the team in their wrestling room and what would be needed by all of his wrestlers to win that coveted class 1-A team title. That’s when Baxter’s talk turned to their 98 pounder – “And Morningstar, hell, the way your wrestling you can win the damn thing,” Scott recalled Baxter saying.

It was at that moment the (wow factor) kicked in… the power of someone believing in you and verbalizing that belief in front of others and then that realization sinking in becomes a defining moment, a revelation of sorts in one’s life that is never forgotten! That’s what Morningstar took with him in each match at that 1977 state tournament, till he finished the job and got his arm raised, seizing the first of his 4 consecutive state title victories. It was the beginning of a young man’s dreams fulfilled!

As a sophomore in 1978, the final season under his legendary coach Al Baxter… Morningstar won his class 1-A 105-lbs finals match capturing his 2nd straight state title by defeating Duane Grant of Britt 10-5, finishing the season with a 32-1 record. Grant would go on to a 3rd place finish the following year in 1979 and continue his wrestling career at UNI. Morningstar’s only loss that season came at the hands Paul Kreimeyer of Wilton by referee’s decision.  Kreimeyer, if you remember was a two-time state champion, a runner up and a fourth place finisher.

In Morningstar’s junior season, he bumped up 2 weights, and under the tutelage of new coach Brad Smith, went on to win his third consecutive state title by beating Mitch Woosley of BCL (Conrad) in the 1979 Class 1-A 119-lbs finals match 8-4, and again finishing the season unbeaten with a nearly perfect 31-0-1 record. The lone blemish – a draw, resulted from a match against a Durant wrestler (Skeet Smith) who was noted for a neck wrench. Scott recalled, “I was up 8-4 with four take-downs and I went in for another take-down and found myself fighting for my life. I fought off my back and then got an escape for the tie. Sometimes you learn more from your mistakes.” Here’s the thing… if that match would’ve been wrestled under today’s tie breaker rules, who do you think would’ve won that match?

In 1980, Morningstar closed out his senior season unbeaten and unblemished, winning his 4th state title in the class 1-A 126-lbs finals match against a very tough Tim DeLarm of Midland (Wyoming) in a close battle 4-3.  Morningstar’s record was 20-0 in his final season, mainly because he missed time in the lineup recovering from a broken ankle and a bout with pneumonia. A fact that reveals his physical toughness, determination, and his will to win in finishing what he started 4 years prior, completing the astounding achievement of becoming just the third 4-time state title winner in Iowa HS wrestling history. He was also an All-American at 132-lbs placing 4th in the National Freestyle tournament and made the High School All-American team that year.

Scott Morningstar was inducted into the Iowa Wrestling Hall of Fame in 2008.

I enjoyed reading and researching information about Scott Morningstar and getting reacquainted with his high school career. Scott was a fantastic wrestler and deserves consideration for IA high school wrestling GOAT…

Some additional thoughts about that state tournament in Scott’s senior season… There were also a number of other great wrestlers that were on the wrestling scene at the same time that were garnering lots of attention and well deserved accolades like Barry Davis (Cedar Rapids Prairie) and Clark Yoder (Sigourney), who were going for their 3rd state titles. It was a tremendous evening that all Iowa wrestling fans got to share in back in 1980. Morningstar was also following Lisbon’s own Jim Lord, who won his 3rd title just 2 years prior. Those studs will undoubtedly get more coverage in the 3-timer (almost 4) series. But even with the spotlight focus moving around from one legend to another, I’m here to say that Scott Morningstar doesn’t stand in anyone’s shadow! The red-hot spotlight of that state tournament tells me that 1980 was a banner year for Iowa wrestling and the sport was on the rise.

Scott Morningstar’s high school career is as close to perfect as you can get while just short of perfection. He climbed that “Mount Everest” peak and conquered its glory, and did it 4-times… he was an exciting, tough and talented wrestler to watch, and is one of Lisbon’s GOAT’s… He’s deserving of this spotlight and his candidate consideration for Iowa HS wrestling’s GOAT!

One of my favorite quotes I found while researching this article involved the subject of how a coach motivates his wrestlers. This one came from Scott Morningstar, in Dan McCool’s book – “Reach for the Stars”, while discussing Morningstar’s freshman year state finals opponent with Lisbon coach Al Baxter… “Baxter was one tough son of a bitch. I was deathly afraid of him, but I loved him. He never did anything to hurt me, but I’m telling you when he’d put his big paw on your neck, and here I’m a shrimpy little 98-pounder, and he’d say, ‘You’re going to make him cry in front of his mom and dad and grandpa and grandma’, you could beat anybody!”

It reminded me of that McDonalds commercial where the father trainer is trying to get his boxer son to turn that beast mode switch on, and tells the youngster – “Remember when someone stole your fries son? Well THAT’S THE GUY!”

Next post: Inside the Rivalry Chapter 7, Part 5: Chris Helgeson Crashes the Collision Course and Sundell Wins His 4th