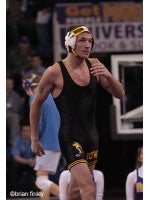 I originally knew Mario as “Manolis Galanakis’s brother.” Manolis beat me in the consolation semis at state as a third grader and I never saw him again. Never heard the last name, Galanakis until 3-4 years later when Manolis’s younger brother, Mario, beat one of the best guys in our youth club, Chris Johnson (WB-ND) at AAU state. He reminded me a lot of his brother.  INSANELY tough to score on. Mario appeared to be the same way… he was also able to rack up the score with his offense. Just an incredible wrestler.

Mario Galanakis: I wrestled for the first time when I was four years old. My older brother, Manolis started doing it when he was five and I was immediately on board. My dad didn’t know anything about the sport at first so it was always my mom waking us up at five am traveling to all the local little kids meets. A few years went by and my brother and I were making a name for ourselves around the area. My dad caught the bug and started making my mom stay at home so he could take us. We were both very successful at a young age. We both made it to state every year. The best I ever got was second, losing to Trent Paulson. I’d say he was one of my bigger rivals as a kid. Having my brother, Manolis as someone to look up to and us two always trying to out-do one another is something that I believe made us both very good!

When Mario and Jesse collided, Jesse had already won three state titles already and hadn’t lost a high school match. Mario’s resume did not match Jesse’s, but he had a reputation of having an incredibly high ceiling. People knew he was really good. He had his share of believers, despite not having the resume Jesse had coming in.

Mario Galanakis: I placed fifth as a Freshman. I lost to Joe Reiter from Don Bosco in the Semis and Luke Foor from Wapello to go for fifth and sixth. Sophomore year, I was undefeated going into state and lost to Dustin Hinschberger from Belle Plain in the Quarterfinals. I came back and got third.

Jesse Sundell: I knew he was a great wrestler. He had placed all two years prior to us meeting and he had been in my bracket before and had seen the wrestlers he had defeated. I knew he was going to come at me with everything he had.

Mario Galanakis became a household name to my family when I was a sophomore in high school. The year was 1999 and one of the best things to happen to Mediapolis wrestling occurred. Mediapolis hired a new superintendent who was an avid, passionate wrestling fan and had an extensive wrestling background. His name is Fred Whipple, a former DIvision II National Qualifier, wrestling official and wrestling coach. He came to Mediapolis from Nodaway Valley. One of Fred’s sons is named Kirk who quickly became one of my best friends. When Kirk was at Nodaway Valley, he was best friends with Mario Galanakis. And he and his dad swore that Mario was one of the most gifted wrestlers they had ever seen. The guys on the Mediapolis wrestling team heard approximately 10,000 stories about Mario and what he did and/or was capable of doing. And we believed every bit of it, for the Whipple’s knew wrestling.

Fred Whipple: The seven years I spent at Greenfield-Nodaway Valley were great years. The next seven were great years. They had a rich tradition of Baier’s, Christensen’s, Swoyer’s, Benton’s, Wallace’s, Riley’s and of course Mario Galanakis. Kirk and Mario were and still are great friends as is my son-in-law, JJ Cooper (state champ from Wilton) and Mario. I loved those years and Mario was clearly a key to keeping the tradition alive. Ironically, prior to that, I was a wrestling coach at South Hamilton Jewel where I became good friends with Brian Reimers, Jesse Sundell’s coach.

When the Sundell-Galanakis debates started to unravel on the message boards, many people took the stance of, “Sundell has never lost a match and dominates everyone. Why should he worry about Galanakis? The kid is a year younger and has yet to win a title.” I understand this logic, especially since I knew precisely how good Jesse was. If the conversation were about ANY other wrestler in the state, I would have likely just thought, “stupid debate, no one will ever beat Jesse in high school, for he is the best wrestler that I’ve seen” and moved along, but this was the Mario Galanakis kid we heard so much about. And that whole year, the Whipple’s insisted that Mario was capable of going with Sundell. So I paid attention. I didn’t dare get in the middle of the arguments, for both sides were becoming progressively infuriated with each other as the year went on, but my interest was surely sparked, if not for the matchup itself, for the Jerry Springer-esque cyber-fights that took place every day on the message boards leading up to the matchup.

Jesse Sundell: It really started my Senior year. The online message boards had just started to come out. Looking back on it, sometimes I wonder if it would have exploded as big as it did if it weren’t for the message boards. Lots of people were trash-talking each other, picking sides, etc. It is crazy to think how crazy things got with Mario and I when neither one of us had done anything at all to get it started.

Mario Galanakis: I have always respected Jesse and always will. A very good person who treated me with respect as well. I had tons of respect for him back then, which may surprise people, for there was a lot of talk about us. A lot of message board flame wars about us. I was never involved in any of that and as far as I know, I don’t believe Jesse was either. Whoever it was, they sure did a good job of building up our matches!

This war was scheduled to take place in the postseason, starting with sectionals, followed by districts and if all went as everyone expected, concluding in the state finals. On paper and according to their resumes at that time, Sundell had the upper-hand, but Mario was set on changing the course:

Mario Galanakis: Going into my Junior year, Sundell was the target I was aiming for. A lot of people may not know this, but the year before, I took third in the bracket where he won his third title. And I would have wrestled him that year at state had I not been beaten in the quarters by Dustin Hinschberger from Belle Plaine. I was winning that match 4-1 with 12 seconds left and riding him out when he hit me with a whip over or something. I lost in the last seconds. Sundell beat Hinschberger in the semis and went on to win the bracket that year. Luckily I wrestled Hinschberger for third and got a little redemption back from the loss, but had my mind set on a state title that year also. I knew Sundell would be in my bracket again the next year and I was gonna prepare myself to be ready for him.

Mario had several supporters, believers, etc. throughout the entire season, but his uncle stood out as being someone who went above and beyond when it came to helping him prepare to defeat Sundell.

Mario Galanakis: My Uncle Dan Hayes helped me prepare a lot. He is Creston standouts, Boone and Beau’s dad. He is Creston state champ, Andrew Hayes’s uncle also. After my sophmore year Dan was the one getting me prepared for Sundell. I remember him making me tape a picture of Sundell that he had clipped out of the register on my bedroom door so that I would work harder that off season. He always pushed me to be better and had a huge impact on the success I had! Definitely my number one fan! He skipped Boone’s sectionals and districts that year to be at mine.

Next post: Inside the Rivalry Chapter 7, Part 4: The Long Awaited Sundell-Galanakis Showdown