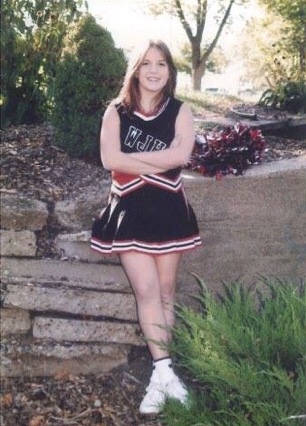 They wake up in the wee hours of the morning right before the sun comes up, the same we do.  They ride the long two hour drive to the tournament & two hour drive back.  They sit in a gymnasium from eight in the morning until six at night cheering us on in every match.  Most of the time we don’t even acknowledge that they’re there. They never get a thank you.  They are the unsung heroes of this sport. They are our cheerleaders.

I’ve been involved with the sport of wrestling since 1991.  Went to my first dual meet in December of that year & in early 1992 I attended my first wrestling practice.  I first became involved in the wrestling media in 2007.  In nearly thirty years of being involved in this sport I cannot remember a single time when I saw a cheerleader or group of cheerleaders being recognized for their contributions.  I’ve read everything from the Predicament, to W.I.N. to Amateur Wrestling News to every internet publication the sport has throughout the World Wide Web. I don’t think I’ve ever seen a highlight or a feature on a cheerleader.  I hope I’m mistaken. I hope I’m wrong.  I hope that there have been & I simply didn’t see them.

I don’t know how it is at other schools but at Sigourney High School where I wrestled, our cheerleaders received letters.  They deserved them.  They earned them.  They also deserve to be showcased once in a while, the same way the wrestlers & the coaches are.

Even when I try & hide it, I can’t. One way or another people can always tell I was a wrestler.  I have that build & of course once you follow me on facebook, it becomes overbearingly apparent.  I had recently been cast in Iowa City Community Theatre’s THE FANTASTICS & one of my cast mates, Reagan Loula (now Regan Estes) asked me if I had been a wrestler.  I told her I was & she said she had been a wrestling cheerleader in high school.  Come to find out she had cheered for Washington High School, a school we dualed every season.  Having been a senior when she was a freshman, she had been there during one of my matches.  Talking with her over the course of the production, I realized how unappreciated & overlooked cheerleaders are throughout wrestling.  Something I hope to change.

1.  How did you become involved with Wrestling cheerleading?

I was really just trying out for cheerleading in general, but wrestling quickly became my favorite. Something about the way we used the mat for our cheers just appealed to me more than our football or basketball cheers.

2.  Cheerleaders in wrestling are often overlooked & underappreciated.  Why do you think this is & what do you feel the wrestling community needs to do to make their biggest supporters know they’re recognized?

I would say that opposed to other sports’ cheerleaders, we are right there on the mat with you. We feel every pin, every victory and every loss much more than cheerleaders for other sports.

3.  What are some of your favorite memories of wrestling cheerleading?

Honestly my favorite memories are the camaraderie between us and the wrestlers. It really felt like we were a team.

4. Some might think that Cheerleading is a breeze where you just sit on the edge of the mat & wave pom poms.  However it often takes a lot of hard work & discipline.  Talk about the amount of time & dedication it took to learn some of the routines.

I mean, I can talk to you all day about the bruises I sustained. I also tore my rotator cuff doing a basket toss (a move where one cheerleader is thrown in the air & then caught by the other cheerleaders) freshman year while being a wrestling cheerleader. If you want to know more, watch the Netflix documentary “cheer” and you will see.

5.  How do you feel being a member of the wrestling cheerleading squad enhanced your life? How did it make you a better person?

6.  Did you cheer for any other sports during high school?  What were the differences between cheering for them & cheering for wrestling? Do you feel you were more or less recognized for your contributions or about the same compared to wrestling?

Yes, I cheered for football and basketball. And I do think that we were thought less of for being wrestling cheerleaders. I don’t really know why, but it was and is upsetting. Thefootball/basketball cheerleaders said that we weren’t “real” cheerleaders because we were always sitting

Wrestling cheerleading was always my favorite. I don’t have a concrete reason, it just was.

Next post: Who Is The Iowa HS State Wrestling GOAT?!? The Case for Eric Juergens, Maquoketa ’09