Who Is The Iowa HS Wrestling GOAT?!? The Case For Bart Reiter of Don Bosco ‘09 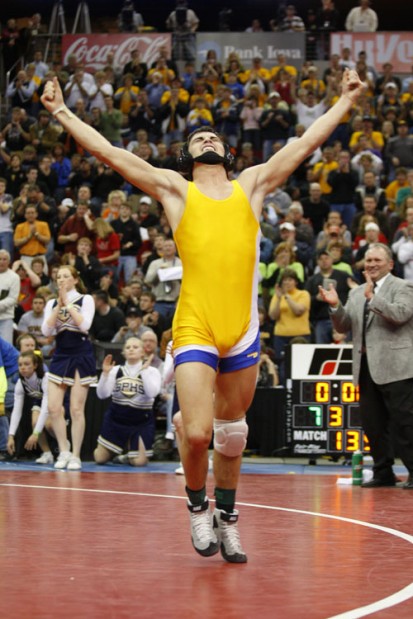 This is the first of 2 Reiter brothers that you will see right off the bat, for as mentioned, I am starting off with the 4 timers in this series and Bart was the 2nd 4-timer in the Reiter family… the first one being 2nd oldest boy, Mack. Joe, Mack, Eddie and Bart Reiter…. I can’t be the only one who thinks Doug and Janet Reiter picker out some super cool and ultra tough names for their sons.

Sadly, Bart’s legacy of being one of the GOAT’s for Iowa HS State Wrestling has faded a bit, for when having this debate, people always want to include college and offseason accolades into the mix when formulating their opinions and claims… This isn’t always entirely fair and I don’t believe results in a claim or belief that is 100% accurate. There are a lot of factors that come into play when weighing these things out. For offseason accolades, maybe a guy didn’t reel in the Fargo titles and what-not because they were busy with other things? This may be the case, for I remember that Bart played baseball, which is something that I always respected him for, for I am personally a huge advocate for kids playing and succeeding in multiple sports despite the belief that you should devote your entire life in HS to wrestling in order to succeed at the next level. To each their own, but I believe a kid can benefit and vary their skill set as well as not burn themselves out of they choose to do more than just wrestle during the offseason. And with college, who knows what can happen to influence the outcomes… the line(s) of success are so thin. Someone could be injury plagued, have girlfriend/relationship priorities, burn out, have death(s) of loved ones to deal with, etc. that can all affect how their college careers unravel. Bart’s college career was injury plagued. IMO, you can’t knock him for that either. The way I look at it, if a guy raked in the offseason HS and collegiate accolades like say a Jeff McGinness, Mack Reiter, Jay Borschel, Cory Clark, etc. then awesome! That further proves how great they were and adds more ammo to their argument for being the GOAT. However, if a guy is lacking in one of those areas, I refuse to use that as a knock against them because you never know what they could have been dealing with or doing at the time which may have contributed to the outcome… Besides, the debate is “The Greatest HS of All Time” and a guy should be critiqued in this debate, primarily on just that… how they did in their wrestling careers in HS sanctioned events in the state of Iowa. And no matter how you lay it out or mix it up or perceive it, Bart is in the conversation for that and there really is to much to debate with it. Kid was good. He won 4 titles. He finished with a record of 162-2 and the Don Bosco teams that he wrestled for won state all 4 years he was in High School. His two losses were both to guys who were state champions themselves (Cruse Aarhaus and Nick Trizzino) and they were both 1-2 point matches. He had a deadly cradle and was dangerous just like his brother, Mack (and Joe and Eddie as well) so he was “in” any match he ever wrestled, for no matter how the match was going to a certain point, he was always capable of executing a match-decisive move to win it. He and Mack were the first sibling pair to win 4 state titles and were the only ones all the way until 2020 when Cael Happel from Lisbon won his 4th title, following the footsteps of his brother Carter who won 4.  The guys he beat in the finals and at the previous rounds were gamers… He had the following finals matchups from Freshmen to Senior year: Kendall Witt, Cam Wagner, Jason Winkler, Cam Wagner. It should be noted that he also won brackets that included Ridge Kiley, Colton Wagner and other various state champions in the bracket. Bart Reiter was something else. It was a lot of fun to watch him. One of the best ever HS wrestlers in the state of Iowa.

Bart is the only 12x state champ that I know of. 4 individual, 4 traditional team and 4 state dual championships…

Previous post: Who is the Iowa HS Wrestling GOAT? PART 4: The case for Bob Steenlage, Britt