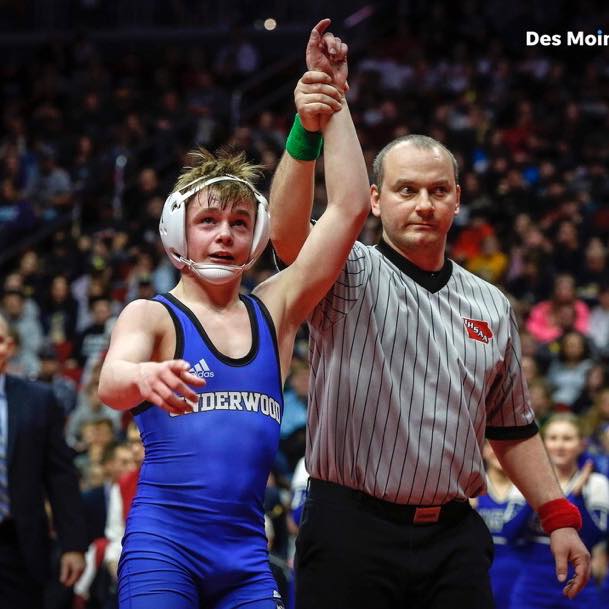 I have known about Adam for a long, long time. Heck, the Hargrave bros were on the same Freestyle team that I was on. Monster USA which is run by long-time Louisa-Muscatine HC and Hargrave’s HC, Tom Mashek… Great coach.  Anyways, Adam is an area guy for me being from Mepo. Straight out of the Southeast Iowa Superconference. We used to see the Hargrave family everywhere once they started wrestling. We would see them at local tournaments as well as the major tournaments that the serious youth wrestlers generally attend. Adam is 2 years younger than my brother, Justin, so we would see him go at it with guys that Justin would wrestle in even years and he would always do well against them.  Ever since the kid was tiny…5,6 years old or whatever…Adam Hargrave was always one of the best local kids in that grade.

Adam was 4 years younger than me and jumped on the scene as a Pee-Wee wrestler when I was a 4th or 5th grader.  A couple years later, his younger brother Travis, who seemed much more animated out there than Adam, started wrestling.   There was the dad, Greg Hargrave, who was a youth coach for Louisa-Muscatine and a very nice guy and all business when it came to supporting his wrestlers. I don’t know Greg well, but Adam always reminded me of a mini-Greg Hargrave. Every time you’d see Adam at a tournament, he would spend a lot of time standing mat-side, appearing to be studying and taking mental notes to some of the matches that would unravel in front of him. He would always have a serious expression on his face, equipped with what I grew up calling a “corporate eyebrow” which means one of his eyebrows would be raised while the other rested, giving the vibe that he was analyzing the hell out of whatever wrestling match he was watching.  I have learned over the years that Adam is a very intelligent wrestling mind, so I was probably on to something there. On the mat, he was on a mission.  All business. Wasn’t cocky, wasn’t a poor sport…He just seemed wise beyond his years in several ways, really.

It was my brother, Justin who pointed something out to me about Adam one time.  When Adam was in maybe 2nd or 3rd grade, he was sitting in a corner at a youth tourney helping coach Travis, who was tiny at the time.  Justin and I were standing right behind them the entire match. When the match concluded, Justin nudged me and said with a smile, “listen to this little Hargrave kid talk to his brother when he gets back to the corner.”  I had no idea what he meant by that at first, but did a few seconds later when Adam began giving Travis some elaborate, detailed and very good wrestling advice.  It cracked me up that a kid that young could know so much about wrestling and be able to effectively coach it already and it apparently cracked Justin up as well, for I am guessing he had noticed it before that match,

Nowadays, Adam continues to put his vast wrestling knowledge to use, for he is one of the best wrestling officials in the state.  This is not surprising to me at all given how he studied the sport from a young age and it makes me happy that we have officials out there who are as knowledgeable and passionate about the rules as Adam as well as the consistency he has shown in terms of ensuring that he makes the right calls, helps other officials with his own insight, treats people with respect even when being disrespected himself and most importantly, there will never be an arrogant vibe with him that will come off as if he feels like he knows everything there is to know about officiating, for he continues to be an active learner looking to improve his skills in the thankless world of officiating.  Few of us are courageous enough to enter the officiating world, let alone at a level that Adam has… It’s a comfort knowing that we have wrestling zebras like Adam who care deeply about what they are doing, are 100% fair and strive to be the best official they can be, not for the personal glory, but for the love of the sport and the athletes it produces.

A lot of these questions will be directed towards Adam’s officiating career, for I know that he holds that in just as high of a regard/importance as he does his own wrestling career.  Iowa wrestling is lucky to have guys like him. He makes Southeast Iowa wrestling proud in several ways.

And to anyone reading who has the desire to try officiating someday, I would advise you to observe how Adam does things when you see him. He is a great example of the high standard that an aspiring official should shoot to reach someday and if you want or need any officiating advice prior to proceeding, Adam would be the perfect person to reach out to. He cares deeply about the officiating component of wrestling and will do anything to build on it.

My brother Travis-4th Freshman year, Sophomore year 6th,Jjunior year-8th, Senior year DNP. My dad who got 2nd at state behind Mark Schwab his Senior year.
My uncle Mike who was a state qualifier.

During my youth days I would wrestle Gannon Hjerleid of Wapello, Creed Grimm of Wapello, Robbie McIntyre of West Liberty, Niles Mercer of Van Buren. Seth Pugh from Columbus Jct.

I don’t remember. 120 something wins and less than 20 losses.

The cutting weight part. We had a very good team when I was in HS and just to have everyone make weight was the key thing. I missed out on a lot of Thanksgiving Dinners, Christmas Dinners.

Attack style. Try to tire your opponents out.

Seth Pugh, Niles Mercer, Eric Davis. I wrestled these 3 guys all the time it seemed like. All matches were close.

Yes, we went to Regional Duals all 4 years and state duals 3 years. We got 4th two years in a row.

Any of the Iowa Hawkeyes

Who would you consider the GOAT Iowa HS wrestler? Who are your favorite current wrestlers?

Goat- Jay Borschel because of the weight span that he accomplished his 4 time championships in.

When I lost in the quarters at state my Junior and Senior years.

Winning my quarter final matches my junior and senior years.

Going to Fargo and placing in Greco(5th)

A lot of the guys I know are coaches now days. I officiate, but more than likely can’t hang with them.

How much of an honor is it for you to officiate the state tournament?

It is one of the greatest feelings ever. Getting a chance to watch some of the greatest wrestlers come through and watch dreams come true. It is also an honor of how many coaches throughout the state have so much respect for me, well I think anyways….

(EDITOR’S NOTE: They most certainly do have tons of respect for him).

Since you became an official, are there things you discovered that you didn’t realize about officiating until you started doing it?

It’s tough, especially at the highest level of High school.

As an official, do fans ever thank you for the job you do?

From now and then. When someone does thank you, that is one of the best feelings in the entire world.

What are your thoughts on fans who disrespect the officials? How do we slow it down?

It is hard to slow it down. Until then they actually put on some stripes themselves. Fans and spectators need to realize that we are only human and we will make mistakes. And we as officials need to learn to admit when we are wrong and we need to make the situation right. Anyone that has an ego that gives them the false impression that they are always right, should not be an official. Officials need to watch, listen, and keep learning with the sport.

What are your hobbies other than wrestling?
Camping, Fishing, Hunting.

I love giving back to the sport of wrestling. With out officials, there wouldn’t be any sports. I’m just glad I can give back this way.

I am a very motivated person.

I work at Bayer Crop Division in Muscatine as a PLC Tech. Programable Logic Controllers

Previous post: Josh Budke Weighs In On ESPN’s The Season