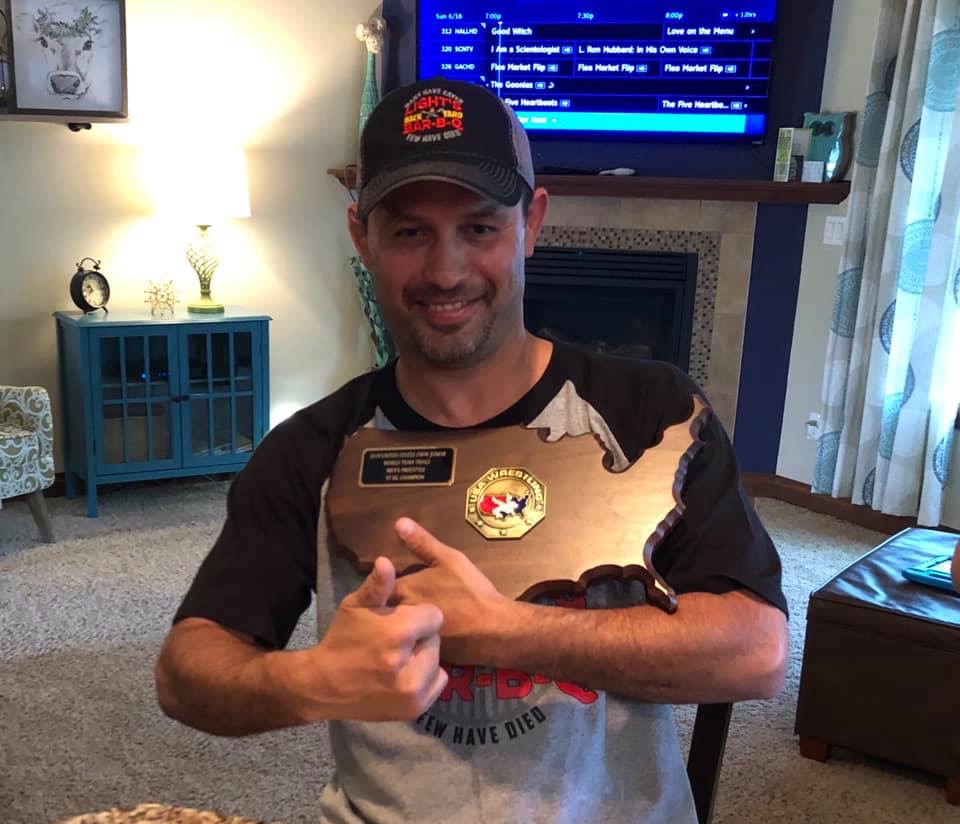 You know what’s my favorite thing about Lisbon’s legendary Light brothers of the late 80’s/early 90’s? Their names.  Holy cow, they have some tough sounding names. To start, their last name is “Light.” That is so fitting for Lisbon, think about it…. LIsbon, LIons, LIght. Kind of cool. Growing up, I always affiliated that name with being tough because they literally did make it part of their lifestyles, to light people up on the mat. They beat the daylights out of pretty much everyone. And all 3 brothers as well as their cousin Vance have tough sounding first names that is given an extra edge by only having one syllable. Shane Light. Zach Light. Their cousin, Vance Light. And the toughest sounding name of them all, Ike Light.

The name, “Ike” always sounded tough to me. I don’t know why. I think there was this huge, mean dog that was always hasslin’ Donald Duck and his name was Ike. Or maybe I thought Ike Turner… kind of difficult to not think of someone getting their ass kicked when you hear his name. I was going to name my son Ike. All three times. Problem was, I had 3 girls. I’m the oldest of 4 boys and father of 3 girls. “Ike” was my front-runner for a boy’s name. You know why?  Because it sounds tough. I want my son to have a name that appears terrifying to opponents when they read it on a wall chart. With that said, I wonder if any kid who didn’t know Ike Light beforehand ever looked at their wall chart before competition started at a tournament, saw that they had to wrestle Ike Light and got scared before even knowing the dude because he has such a tough sounding name. They probably had a conniption when they found out that Ike more than lived up to the tough sounding name. Something about those tough sounding Lisbon names. The Light’s, Casey Baxa, Tate Stamp, Royce Alger, etc. A Lisbon guy named Shea Stamp was one of the best guys in my grade in youth and he and I had a little rivalry. Reading his name on wall charts wasn’t exactly a pleasant experience, for his name is so tough that my mom and dad named one of my baby bro’s Shea… They got that name from Shea Stamp. Seriously. The Swaff’s are unapologetic, stone-cold, Lisbon name stealers, I guess.

Heck, maybe growing up and hearing Ike Light stories from my dad and uncle is the reason I associate that name with being tough. Probably is.

When the topic of GOAT (Greatest Of All Time) Iowa High School wrestler gets brought up, a large percentage, especially those from that era will say that they believe Jeff McGinness from Iowa City High is the best ever.  When McGinness was asked about this very topic and how he sees himself in that mix, his response was something along the lines of, “it is difficult for me to think of myself as the best to ever do it in Iowa, for my entire HS career I wasn’t even considered the best in my grade. In fact, I wasn’t considered the best at my weight every year.  A lot of people thought Ike Light from Lisbon was better.”  That just goes to show you how high of a regard Ike Light was and still is held in amongst wrestling fans.

I don’t know Ike. I’ve never met him. Have just heard stories.  But a lot of what I wrote in his brother, Shane’s intro applies to Ike as well:

One of the craziest things about doing the “RTW” series is talking to some of these guys who were more or less… folk heroes to me growing up. Like the Light family. One of my earliest wrestling memories is going with my dad to New London HS Wrestling practices, where his brother, Brian was (and still is) the head assistant coach. Dad would work out with a guy named Shane Arnold and after practice, my Dad and uncle Brian would talk “who’s who in wrestling” (as well as their glory years, of course). The Light’s were ALWAYS mentioned as being stone-cold badasses. I didn’t understand a great deal of what they were discussing at the time, but I picked up enough to understand that my dad and uncle had the utmost respect for those guys.

My dad and my 2 older brothers. I really had no choice back then. You did as you were told and that was pretty much how it started.

My dad and my uncle George wrestled back in the day for Al Baxter. My cousin, Vance won a couple state titles. My brother Shane was a 4x state champ. My other brother Zach was a 2x state champ and was a runner-up. I also had some cousins that wrestled for Lisbon.

I won some and lost some. The state folkstyle tournament wasn’t as big as it is now. I had more rivalries in freestyle in the Summer from guys like Darrin Coppeck (sp?) from Council Bluffs and guys from out of state like Travis Jacobs from Minnesota and others as well.

I won my first 3 years and took 3rd my senior year.

We were state champs 3 out of the 4 years I was there. The 1990 team which was my freshman year was one of the best to come out of Lisbon.

They were pretty competitive. We never had big numbers so we all pretty much wrestled each other. It got more competitive when we traveled to other schools to practice. I remember Rob Kammerling and a guy from Prairie about got into a fight one time.

Which state title that you won gave you the most joy?

All 3 of them, but my Freshman year was pretty cool because my 2 older brothers were in the finals the same night.

Shane and I didn’t. My brother Zach has fought in all the big promotions like UFC, Strike Force,etc. He also trained Rampage Jackson and Mike Bisbing for a while.

Yeah in our own way, I guess. Not a lot of high fives or hugs if that’s what you mean.

If the Light bros ever got into a fight, what was it over?

Not a lot . If we ever got into trouble from our dad, Shane and I would just blame it on Zach…

Shane, Ike, Zach…your cousin Vance… this is a loaded question, but how would things go in a round robin bracket with those 4?

We might all come out with one loss ya never know. But what kinda competitor would I be if I didn’t say I would be holding the chart at the end?!

Who is Lisbon’s GOAT HS wrestler?

There have been a lot of great wrestlers come from that school. As of today, I would say Cael Happel because of his dominance in the state tournament all four years.

I believe so. The records don’t lie. He just brings the right things out of the right kids and it works. I know I enjoyed him as my coach.

We wrestled all year from 3rd grade on.

Not a specific style I guess. I had just real good technique from wrestling all those years.

Sure did. If ya don’t, then your teams not going to be very successful. Too many to name.

I really wanted to delete this question, but have to say the Detroit lions…

I am a union sheet metal worker.

I try to keep up, but the older ya get it gets harder to remember.

I coached in California for a couple years when I lived there. I helped out at Alburnett Kids Club for many years and also at Marion High School. When my 2 sons started getting older and developing  their own interests, I’ve become less involved. I help out here and there when someone asks me to.

Stick with it and have fun. If you don’t put in the work, don’t get mad when your results aren’t what you wanted. My main advice, however would be more for the parents. Let the coaches coach and you take the role of  being the parent.

My body would say no, but never say never.

Yes. A guy I coached in California named Josh Jarrett and Alburnett’s 3X state champ, Tyler Shulista. Both of those guys were in my wedding.

I have plenty, but I might get into trouble for saying them. Shane Light was a 4xer, but wasn’t ranked first until his Senior year. I bet a lot of people didn’t know that about him.

Next post: Inside the Rivalry:Nick Lee (Columbus Jct.) vs. Joe Reiter (Gilbertville-Don Bosco)