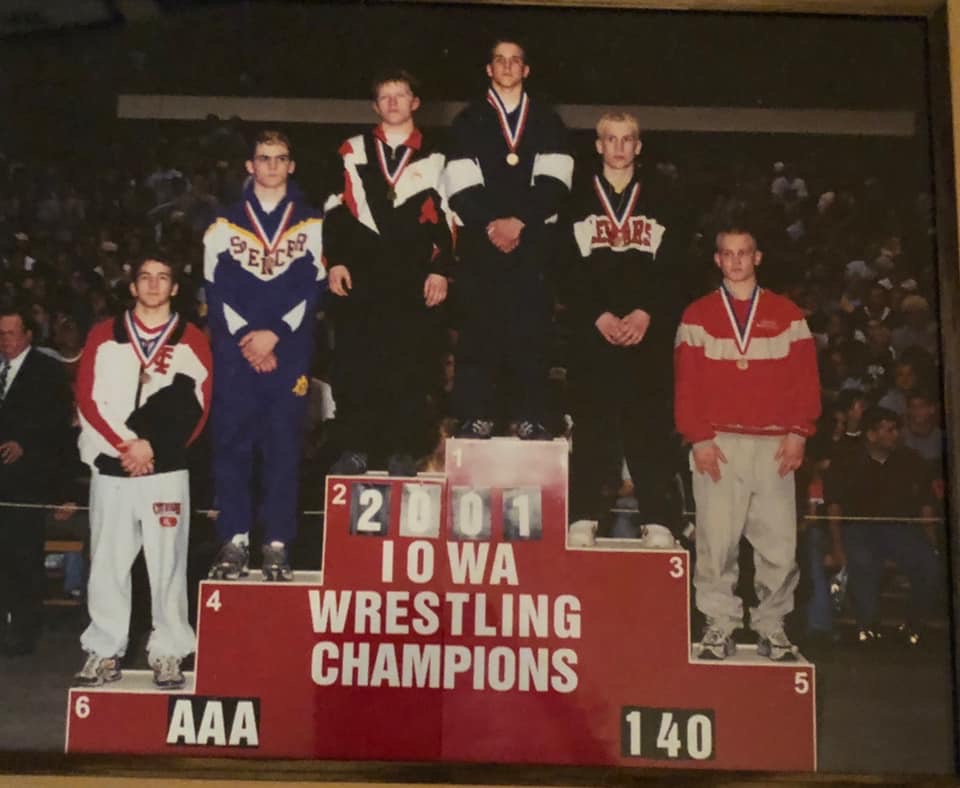 Here is the bracket without results: 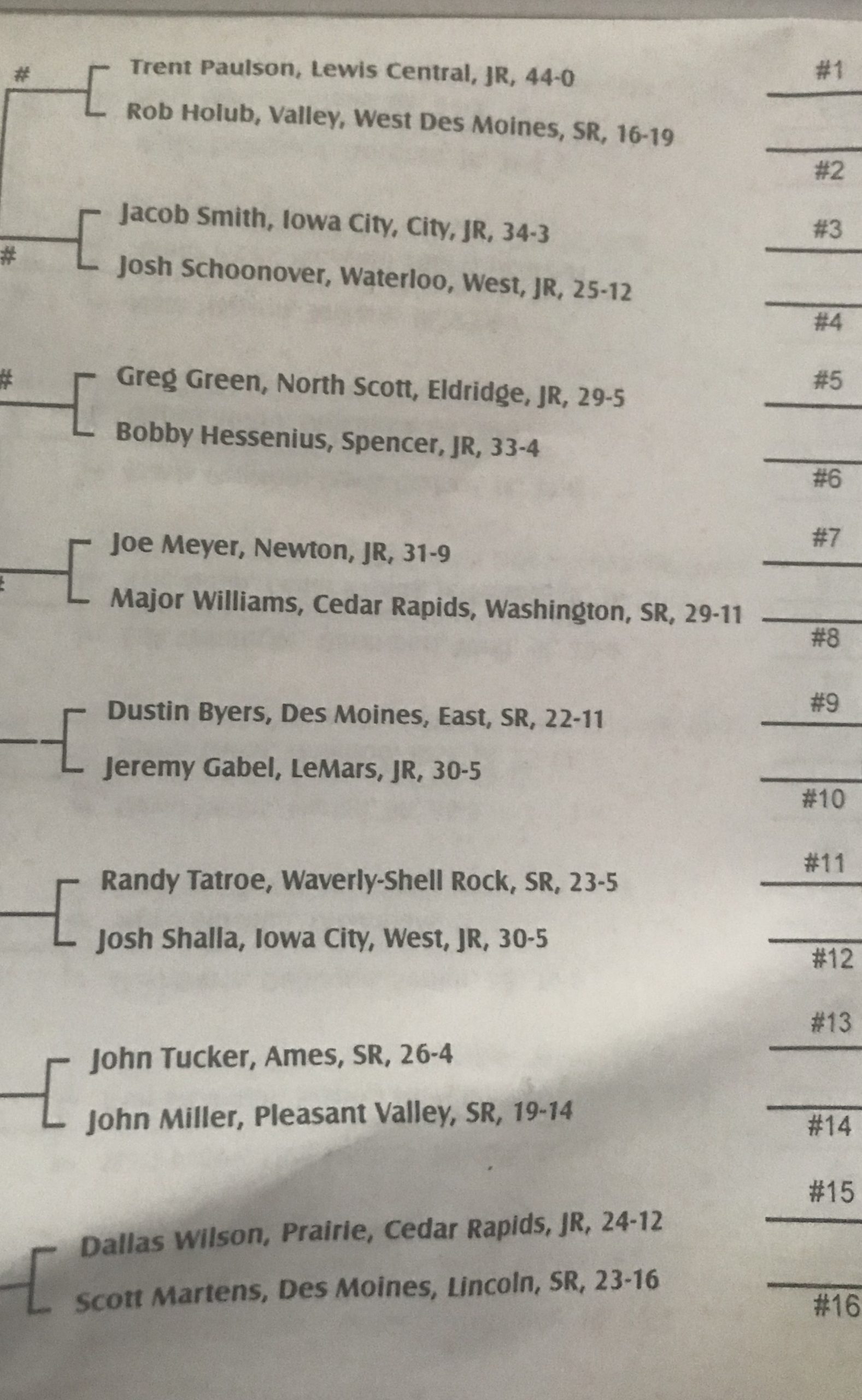 Here is the state finals vid:

* Trent Paulson was the first guy ever to win 6 AAU state titles. And it surprised a ton of people when he didn’t win a HS State title until his Junior year… which was this year. But that’s not saying anything demeaning against him, for he had a hornet’s nest every year at state. As a Freshman, he placed 3rd behind Ricky Pence from Prairie and Mark Hangsleben from Urbandale. A lot of people remember that match from the spladle Hangsleben put on Pence in the finals. Nasty. Anyways, the next year as a Sophomore, he was beaten in the finals by Ryan Heim. Again, understandable. Heim was a legend in Dubuque and the guy was as strong as a lot of D1 studs when he was in HS. Didn’t surprise anyone when Trent went on a tear his Junior and Senior year, as well as college in which he was a Natty Champ for Iowa State.

* Maybe I was out of loop with the Ames guys, but it seemed like they had some tough dudes that just can’t out of nowhere. Brandon Winkey, Josh Marker, John Tucker… impressive. There are several others I am forgetting, but I never heard of any of those guys until HS.

* At first glance I thought the 3rd place guy was Shane and Brian Hessenius’s younger bro, John, but knew that didn’t make sense the moment I noticed their cousin, Robbie Hessenius from Spencer on the 4th place spot. I got to know all the Hessenius bros/cousins at Loras College. Great people. We had a guy who struggled mightily with Gabel.

* Jacob Smith was a huge fun-hater for me. HUGE thorn in my side. I just couldn’t beat him for some reason. I beat a lot of the hammers in that grade below me, but Anthony Briberiesco and Danny Elsbury gave me a hard time and Jacob Smith, repeatedly and consistently every year gave me the worst time. I could be having the best day of my life, and at least 5 times, he spoiled it for me. Here are a couple examples (I loved the wall charts so much that if I didn’t win, I would club the guy who beat me at the conclusion of the tourney and steal the wall chart so I could make posts like these 20 years later! Haha, nahh… actually Jacob is a pretty funny dude and wanted to make sure I didn’t forget a couple beatings! 🙂 ) 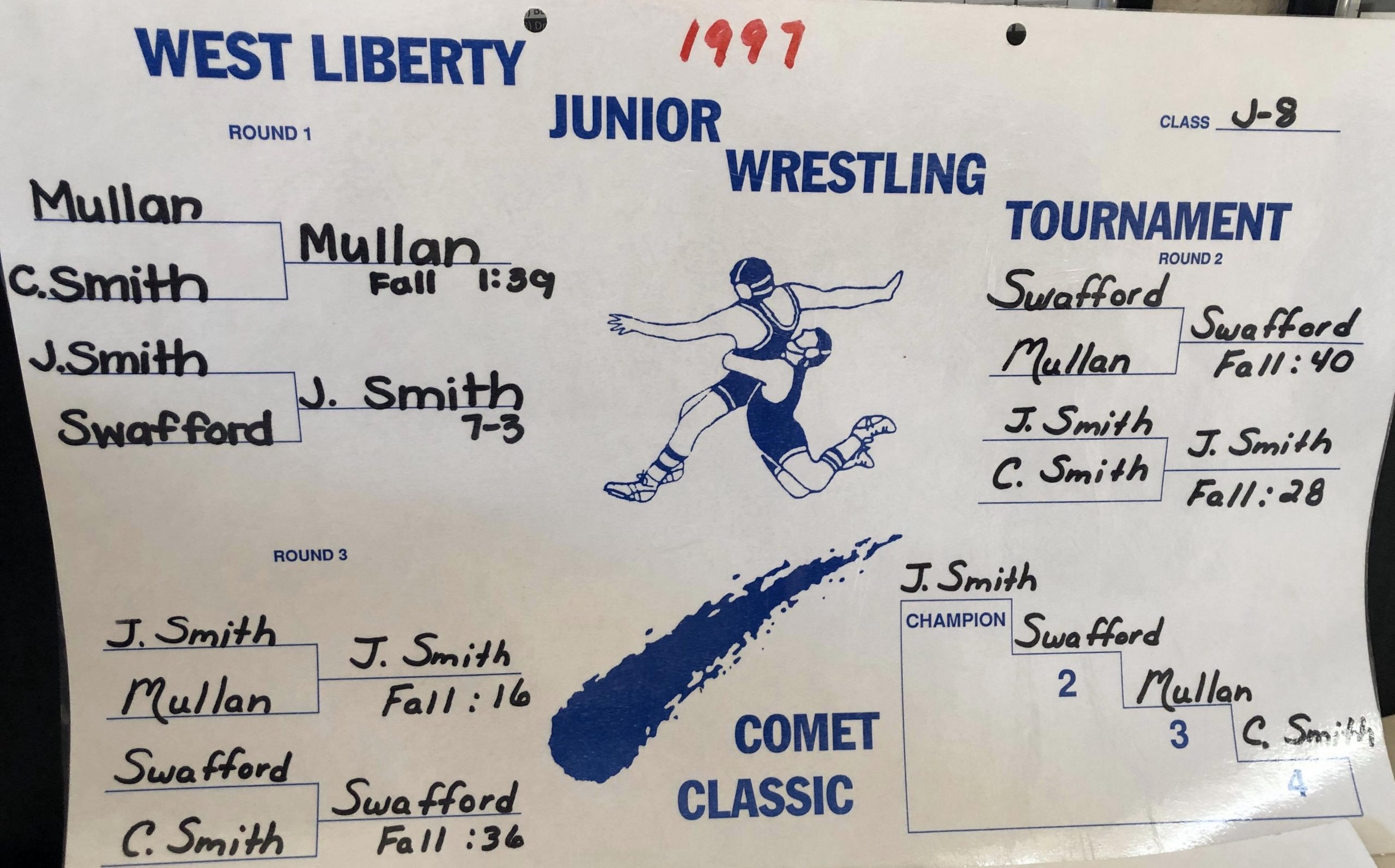 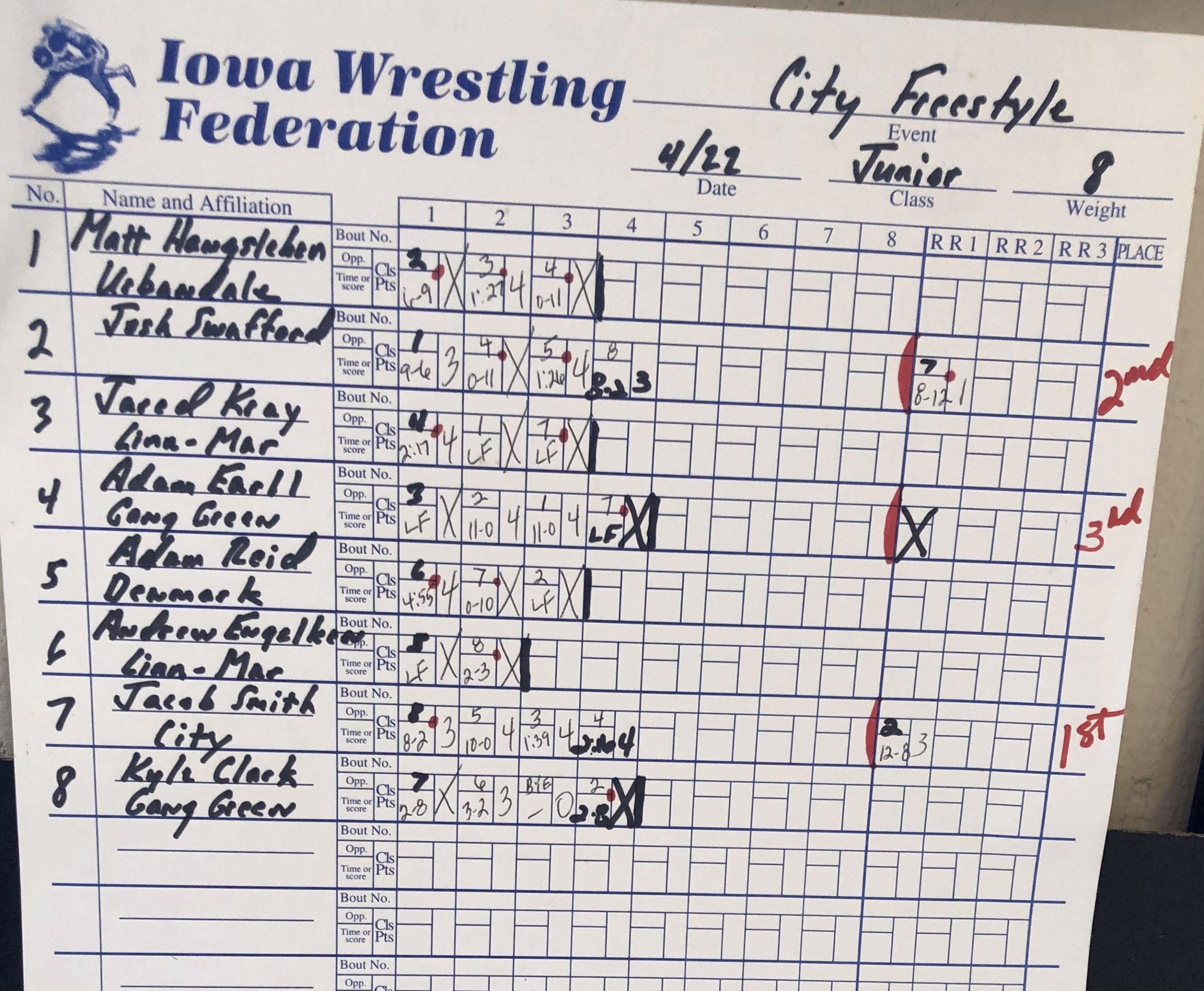 I really do have one of the wall charts because one time I won a tournament that he beat me in, but I placed higher because he lost twice to guys I beat. Smith owned me. The guy was really good… one of the best to not win state, IMO. I had a match against him as a 7th grader where I was up 8-0 and got headlocked and pinned, had a match my Junior year that was back and forth all match that he won 12-8, had a match where he dominated me and gave me one of my only 2 losses (out of like 40) going into AAU state as an 8th grader, had a match as a Sophomore where I was up 6-0 and was pancaked in the last 30 seconds and pinned, and last time we met, when I was a Senior, I had another wild one at I believe, Manchester, where we went back and forth and he beat me like 16-11. He would have been a perfect practice partner for me… we both opened up and let loose… pretty fun matches although I was 0-5, maybe 0-6 against him. Always felt like a better wrestler afterwards. I actually went to his dad’s summer club for a week or two and got a ton out of it… one of the best part-time coaches I ever had, for sure. Jacob placed 3rd-6th-2nd in HS. 🔨