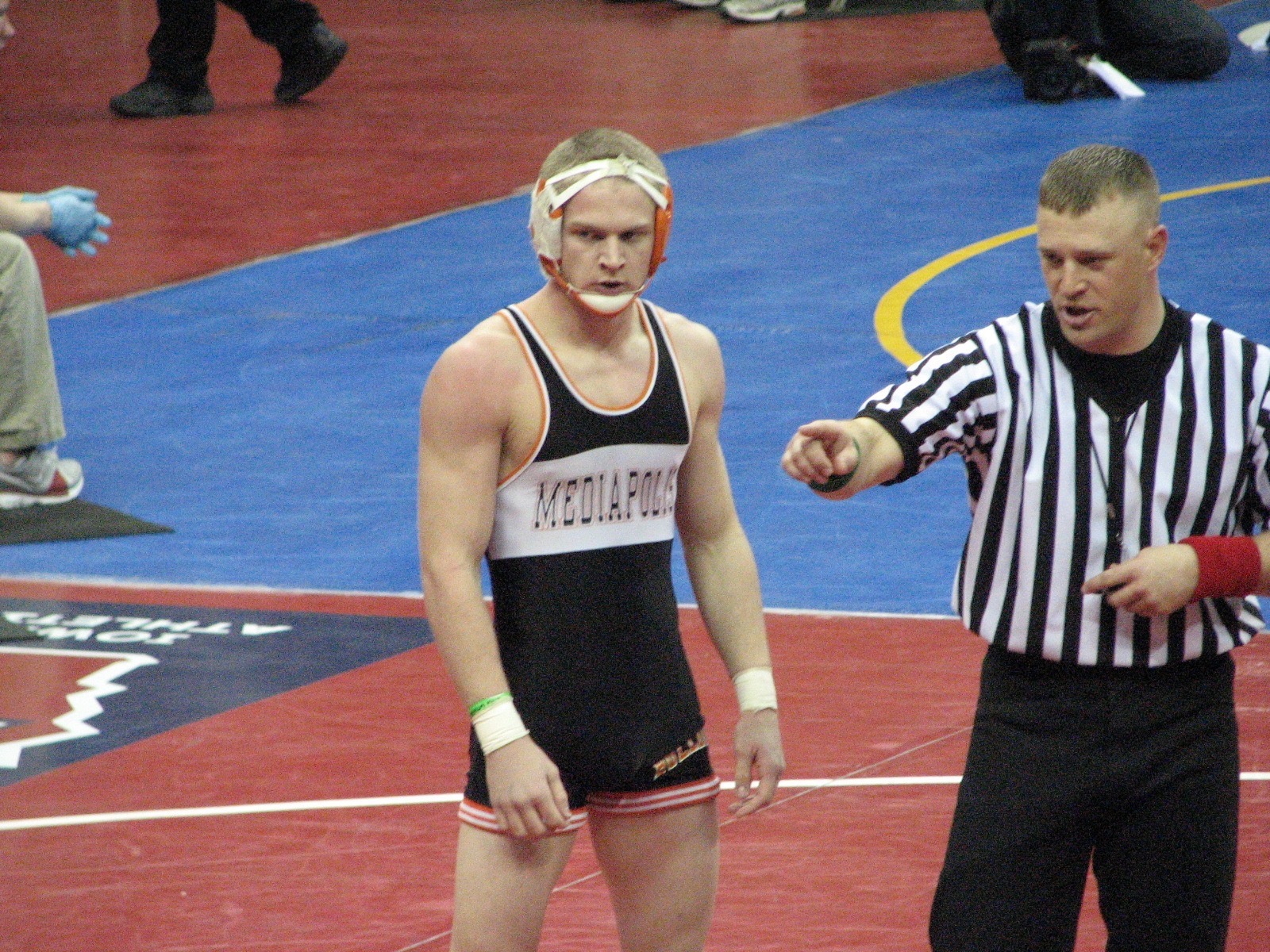 Only the 2nd Mepo guy I’ve done one of these for… crazy, eh?

Kyle and I go way back… not sure if he knows this, but our moms were best friends in high school. They were cheerleaders together. Both his mom and my mom ended up marrying guys who wrestled and when both these couples had sons, they wrestled. And they all wrestled for Mepo… Kyle was in an era that was right between my brother Justin and I (‘01 and ‘03) and my brothers Shea and Brennan (‘16 and 18). I don’t know how to put this lightly, for I don’t want this to come off as disrespectful to anyone who wrestled at Mepo during the era Kyle was in HS, but Mepo had a few years where… well, we were a bit down compared to what we were used to. And we weren’t a bad team at all. Won 60-75% of our dual meets… we just didn’t have a lot of high placers and what-not compared to other years. Mediapolis has been a pretty consistent wrestling program and we’ve been spoiled. Kyle along with guys like Noah Robb, Elliott Jansen, Marcus Marshall, Brady Broders, Jordan Cary and I’m certain that I am leaving some obvious ones out, was a bright spot in this little “drought” that Mepo had. He was taking such huge strides as a Junior and Senior, if he would have had another year or two, who knows what he would have done. He didn’t have the luxury of having experience on his side for he started late, but he surely had the athleticism, the necessary attitude to succeed and the great familial support.  His Senior year, he beat a couple guys at state that were really, really good. As a guy who remembered when he was born for I was raised hearing stories of our moms hanging out, I was very happy for him. It was cool to watch unravel, not only for Kyle and Mepo wrestling, but his entire family is great. It’s nice seeing cool things like that happen to good people like the Baker family. 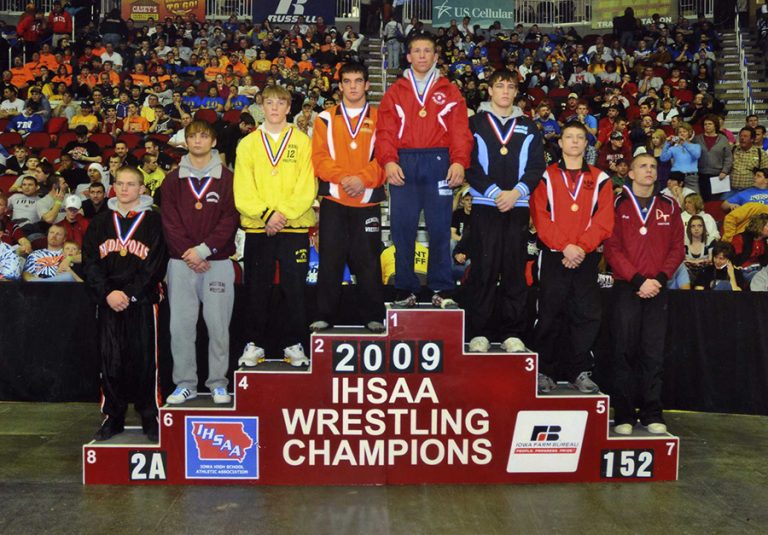 Mostly my dad. Coach Cummings also encouraged me to go out in middle school and high school.

I only wrestled in two tournaments when I was in 1st or 2nd grade. I think I got 2nd in both. In middle school I qualified for kid’s state but didn’t place

I qualified for state at 152 junior and senior year. My senior year I placed 8th

I would say the biggest adverse challenge for me was not going out for wrestling until my 8th grade year. A lot of the kids I competed with had been wrestling since they were wrestling pee wee. So experience-wise, I was generally always behind the eight ball. I guess I never let it bug me because I don’t really believed in excuses.

On my feet, I liked to wrestle at a high pace with constant movement. I avoided tying up ear-to-ear if possible. I liked to keep heavy hands on the head and utilizing Russian ties, under-hook-high-crotch double, low singles, and throw bys. As far as pinning combinations go, I would say I used mostly arm bars and cradles.

Marcus Miller and I wrestled five times my senior year, my record was 3-2 against him

It’s hard to pick just one. Shawn Timmerman coached me since middle school. Joel Baker always pushed me by live wrestling with me. Dan and Brandon Cummings taught me a lot of technique. Mike Vantiger broke down film on opponents throughout the season.

We had a pretty decent team my senior year. I think our dual meet record was 12 – 4.

My list for “local wrestlers” would be Micah Keller, Seth Pugh, and Brad Lower. They were all tough nosed kids with all very different wrestling styles.

What is the furthest you can remember back about Mepo wrestling?

The earliest I can remember would be going to a meet in 2003. Damien Getchell and Spencer Manning are a few guys I remember on that team.

Were you ever able to beat Coach Cummings in Pickleball?

He was scared to play me in pickle ball.

Editor’s Note: HAHAHAHA, that is THE perfect response! 😂😂😂

How fun was it watching Mepo on this run they went on a few years ago?

A lot of fun. When I would tell people I came from Mediapolis, it would always follow with a “Oh Mediapolis? They have a tough wrestling program!”

A little biased here since I am an assistant coach but freshman 106 lber Drew Robinson from Nevada high school. First Nevada state qualifier in 9 years.

Griffin Molle from Notre Dame is a lot of fun to watch, as well as the Lopez boys from New London.

I would say losing the last match of my career 5-7 to a kid from Denver-Tripoli. I had a fisher pin locked up in the final minute which would have won the match via pin or back points. The referee stopped the match and called potentially dangerous as I was turning him. It didn’t sink in until a while after the match that my last high school match would be a loss. I don’t know, I may have shed a tear or two.

The only thing I would change is I should’ve went out for wrestling in 7th grade.

Besides medaling at state, I would say winning the conference, sectionals, and district tournaments senior year. I remember we beat Columbus Junction my senior year in a dual meet. Pretty sure it was the first time in like 5 or 6 years since we’d beaten them. They always had tough teams back in the day.

Freshman year I got whooped up on by Seth Pugh a couple of times. Sophmore year I wrestled Johnny Siegel. Probably a lot I’m forgetting.

I always did a couple camps and at least one tournament. I went out for other sports so I would say it was semi-all-year-around.

I think kids from today are a lot faster and more athletic.

I feel the guys from my day took a little more pride in being in the best shape/condition possible in case the match went the distance.

No, a little bit of club wrestling at ISU.

Wrestling has taught me that life isn’t always peaches and cream. Adversity is around every corner, every day. How you choose to handle adversity, ultimately defines your character.

I am a sales agronomist for Key Cooperative in Zearing, Iowa

I am a volunteer assistant coach for Nevada High School

It might be sound cliché but it’s very true: perfect the fundamentals. Go out for multiple sports.

If it were in the South East Iowa area, maybe?

Favorite/funniest memory during wrestling was Noah Robb (his sophomore year, my freshman year) and his ability to always miraculously make weight, no matter how much he was over. Coach Cummings was always losing his mind Monday before/after practice when he would see Robb’s weight. One particular story I remember: Noah was wrestling 103 and he came in to weigh on a Monday morning. Noah weighted like 122 lbs and all I can remember Cummings saying is something along the lines of, “God D@*#t Robb if you don’t make weight this week, I’m going to cut your ______ off! (To keep this PG-13, I’ll let your imagination guess what the five letter, plural noun was).

Next post: The End of An Era, Morning Sun Wrestling Part 2, The 60’s