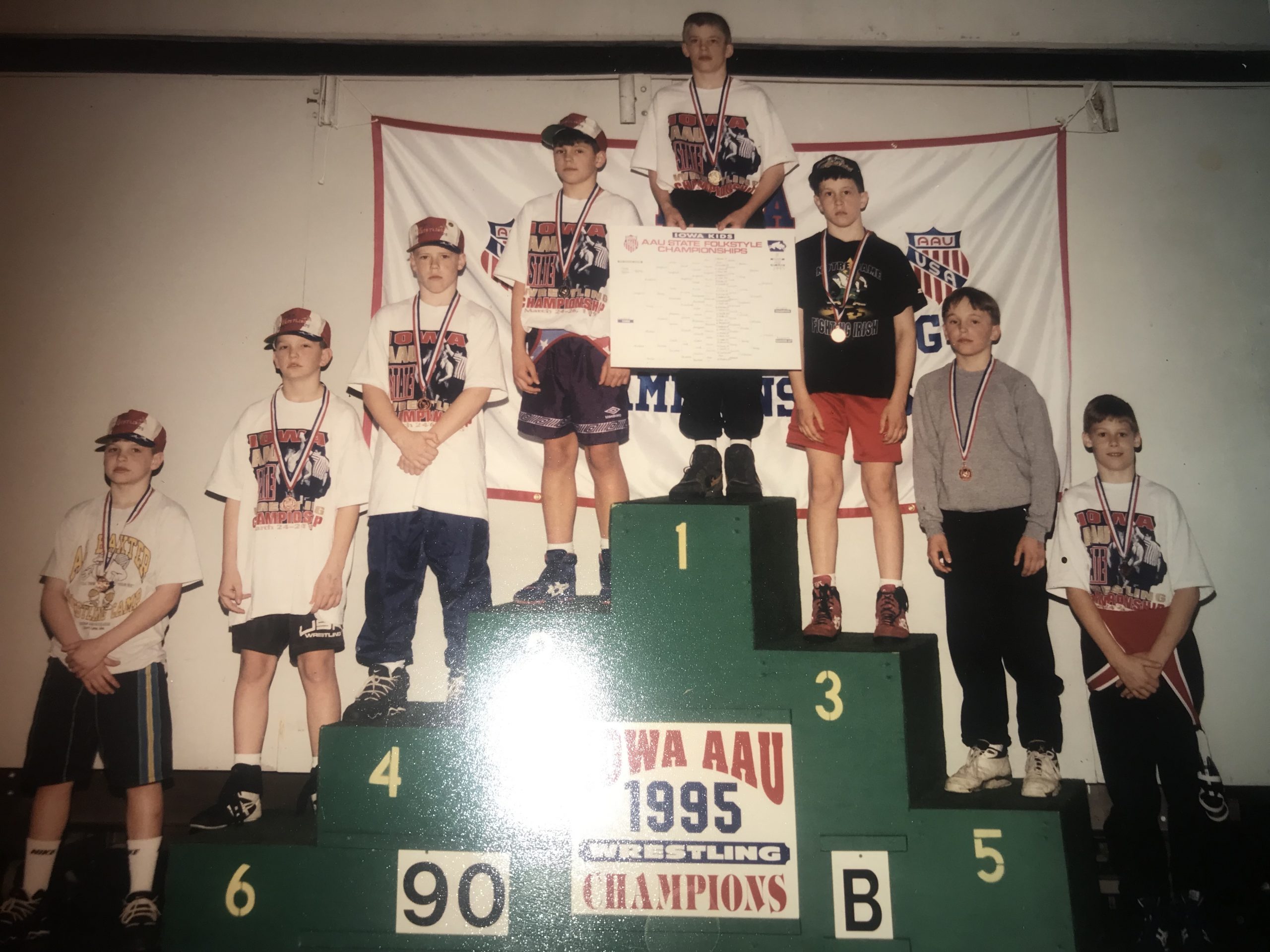 Looks like I spilled pop on this. Or I puked on it. I probably saw that I had to wrestle Matt Vasey in the console semis and barfed on my bracket. Thank God that one went well! 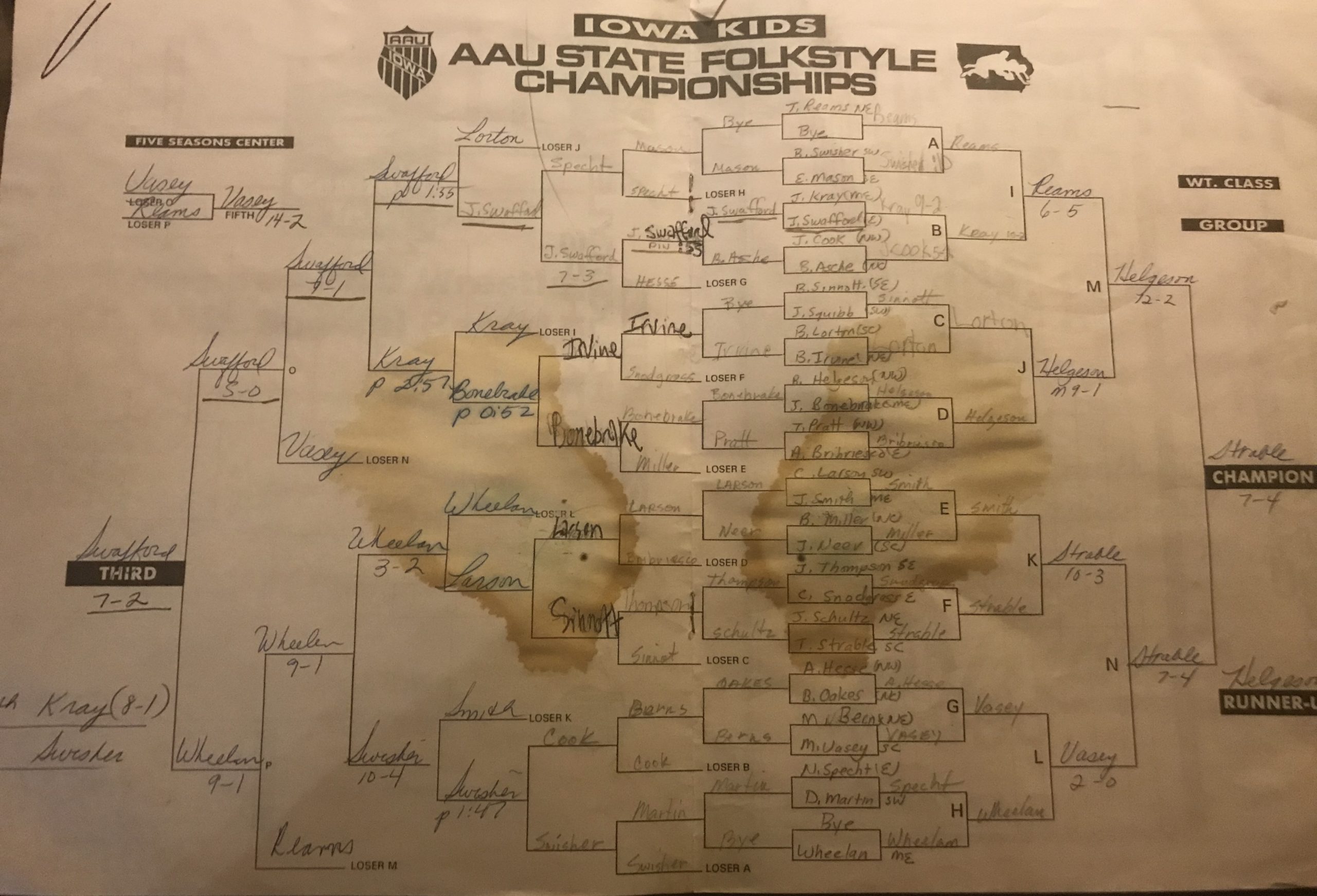 * I figured I’d post this one, since a Remember The Wrestler about one of these guys is coming in the near future.

* That was around the time I started really liking the Notre Dame Irish. My cousin married Lou Holtz’s son and I thought it was awesome. Not to mention, I was raised Catholic. Groundbreaking stuff here.

* Brett Swisher from Harlan was cool as hell and I haven’t seen or heard from him since around that time. I remember him being so distracted in his 7th/8th place match with Kray because he was so much more worried about his brother, Brock’s finals match, which was going on at the same time. My question is, how did Jacob Smith lose to him? I wrestled them both.. I don’t get it.

* I look at this podium and it’s funny to me that I hadn’t met wrestling’s most chatty and one of it’s most beloved personalities, Brett Wheelan yet. Haha, maybe I would have been if I wasn’t so hell-bent I’m annoying Matt Vasey. Vasey aka the world’s polar opposite of me and ironically the guy I wrestled more than anyone at these big AAU and USA tournaments… There’s been a lot of joking around lately with some people from my age/weight range who remember, about my Donkey-Shrek interactions with Matt Vasey. It was one of the funnier things I had going on in my youth career. I mean, this cat beat the crap out of me for 3rd and 4th at USA State my 3rd grade year and I tried talking to him a lot, in which his very friendly, and ultra-proud (as he should have been, Matt was a badass) father basically assumed the role of the mediator. I got two phrases out of Matt that day. 1.) “I don’t like talking to guys I wrestle against” and 2.) I’m guessing this is your first year?” Haha the 2nd comment ticked me off because it was my 3rd year and I wasn’t all that bad, in fact I was like 30-3 coming into that… it’s just that he was super good. The next year I beat him and said the same thing back to him and he looked at me like he wanted to kill me. I remember  saying to Vasey right before stepping on the podium, “OMG, I’m a huge ‘Hanz and Franz’ fan too! We should start hanging out more!” This resulted in an expression of rage upon Vasey’s face. He didn’t get me. In retrospect, I would have much rather had a wrestling chat with Wheelan if I knew him. Vasey didn’t need any more of my crap that day. And the dude hated me, but the feelings were not mutual. I’ve never met another Matt Vasey in my life and I thought he was a character. And he never remembered me. And Matt Vasey is another guy who would have done so much more had it not been for injuries. That dude was one of the best pound wrestlers in the grade, IMO, but was setback by excruciating injuries. Very sad deal when you look at this podium, for a few of them had similar obstacles.

* I had losses to 3 last names that year: Allmandinger (Trent…he was good), Briebriesco like 3 times and Jared Kray. Got beat by Kray 1st round and went all the way back for 3rd and beat him 7-0 in the process. That’s the story of my career.

* Briebriesco was my Achilles heel that year… all season. I placed 3rd at districts because he beat me in the finals there. I couldn’t believe it when he was beaten out almost immediately at state. Helgeson beat him and Colby Larson beat him out… I couldn’t make sense of that.

* The best match in our bracket was between Brett Wheelan and a dude named Colby Larson. That was intense. Brett did awesome!

* Brett always tells me the story of when he talked to Tyler Reams about the semi console matches… Brett was paired up with Reams, of course, I was paired with this Vasey dude who I feel was the closest thing to a complete opposite person than me that I’ve ever met. Anyways, when Reams beard he had to wrestle Brett in the semi consoles, he said, “well,  I guess I got 6th.” Those Reams, Schmidt’s and Geerts’s are pretty wild and crazy when you are in the opposition by corner

* I placed 3rd the year before at state as a 5th grader and was somewhat expected to win that year considering I was the highest returning placer at that weight range not named Pape or Watts. I ended up placing 3rd at districts (Briebriesco beat me there!) got beat 1st round by Kray and won the following matches to get 3rd: Brad Asche, Adam Hesse, Nathan Specht, Brandon Lorton, Jared Kray, Matt Vasey, Brett Wheelan. It sucked.

* I was put on the consolation side by a ME district kid 4 times: (3rd Grade: Cory Connell, 5th grade: JJ Butteris, 6th Grade: Jared Kray and 8th Grade: Garrett Kozik). I’ve had some stern lectures from Brett Wheelan about how bad this pissed him off considering he won that district in 2 of those years and somehow I managed to place higher.

Next post: The Tale of Slothsquatch AKA The Worst Wrestler I Have Ever Met In My Entire Life

Previous post: 2000 Iowa Fargo Cadet AA’s Mack Reiter and Justin Swafford (Soon to be the subjects of an Inside the Rivalry Article)