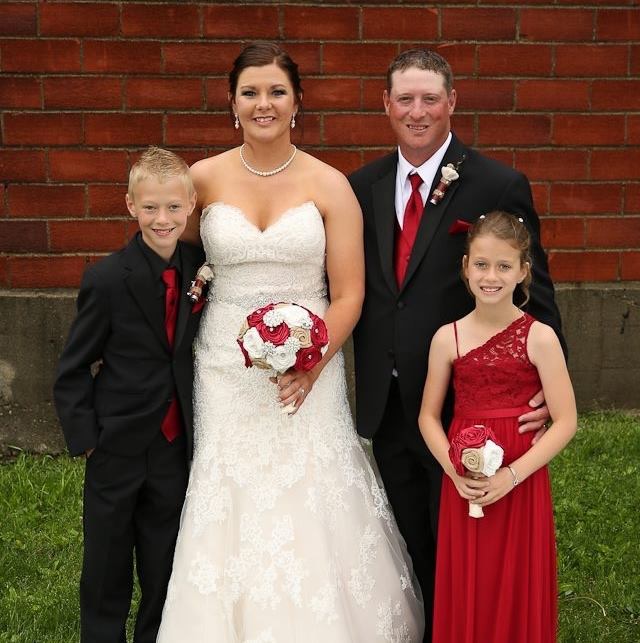 Another one of my favorite thinsg about doing these articles is getting back in touch with some of my old wrestling acquaintances that I haven’t heard from in 15+ years. Kozik is one of these guys. It’s cool to touch base with this dude because I always liked him…despite the fact that every time I wrestle him, he gave me the worst 3rd periods of my life. I met Garrett in 7th grade at the Belle Plaine Freestyle Wrestling Tournament. This was my first ever freestyle tournament. I had like 10 guys in my bracket and made the finals smoothly. Pinned or teched everyone to get to the finals. I was starting to think I was some sort of natural at this “Freestyle thing.” Welp, I was wrong and Kozik was the guy who taught me that lesson.

Kozik was the guy I had to wrestle in the finals of that tournament. As you can all imagine, I was “chatty” with the competition and talked with Kozik quite a bit. He looked so freaking familiar and I couldn’t place why.  He was beating the same placer-caliber wrestlers I was beating in that bracket, so obviously he wasn’t a jabroni or a beginner.  He explained that he had been a light weight guy and was in the middle of a growth spurt and hadn’t wrestled the guys around this weight range, but so far, he liked how he was doing against them.  That made sense.  I asked him how long he had been wrestling freestyle and if he were any good at it and he smirked and said, “oh I’ve been doing it a while…and I’m not too bad.” I then babbled about how I thought I was a natural at it and that I didn’t feel the need to develop any freestyle moves or technique because I was just fine using folkstyle moves.  I’ll never forget his response.  He got the orneriest look on his face and said, “yeah, a lot of people say that in their first year.”

So our finals match arrived and I got off to a good start. Back then it was two 1.5 minute periods and a break between.  I got off to an 8-0 lead. All from carries with back exposure. No freestyle. He was pissed when he headed to the corner. “One more takedown,” I thought. Break ended and I walked back to the center and he STORMED there.  Period starts and he takes me down immediately and then the next 20 seconds introduced me to a world that was 100% unfamiliar to me.  I was rolling around the mat somehow…I wasn’t trying to, but somehow I was rolling in circles and while this was going on, I hear the referee calling, “2!, 2!, 2!” Before I could figure out why he was scoring all these points, the referee stopped the match.  He teched me out 18-8. He put me in about 8 leg-laces/gut-wrenches in about 20 seconds.

Fast forward about 10 months and he and I were to meet in the semifinals.  That freestyle match was firmly etched into my mind at the time still, but I tried to ignore it.  I got off to a good start and held an early lead, but didn’t feel comfortable until the 2nd period when we went out of bounds. I remember looking at one of my friends and winking and mouthing, “I got this.”  A few steps later I stepped over a half and he put me on my back.  Then in the 3rd period, he put me on my back again… I am telling you, when this guy got on a roll, it was ugly.  I think I cried every night for the next 2-3 weeks about that tournament. 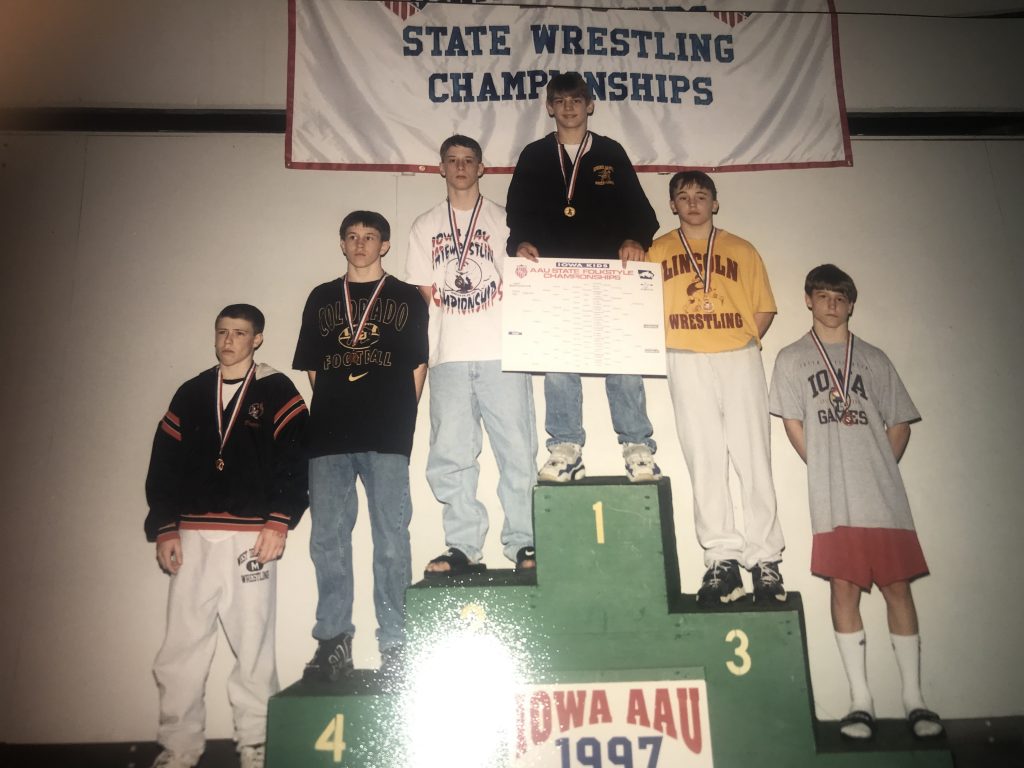 That was the last time I wrestled Kozik, but I always followed him, always wished him well.  He was a really funny dude and I liked him.  He had a great career.  Oh yeah, and I’ve never written this publicly, BUT… Kozik totally got ripped off in his finals match against Mike Winklepleck in the finals that year.
And it’s crazy how much I have in common with him… Both of us are huge Chiefs fans, both of us drove Dodge Dynasty’s in high school and the most coincidental, his roommate as a Freshman at Loras College was a guy named Gabe Stauffer. Stauffer was a wrestler who placed 5th at state for Sumner.  Kozik left after that first year and Stauffer’s was roommate was replaced by a transfer student…me.
This is definitely one of the people from my wrestling era that I have been the most happy to catch up with. This is a great guy.
• Who or what encouraged you to try wrestling?

I had several friends in elementary school that were wrestling so I wanted to see what it was all about. I went to a tournament after 1 practice.  I was hooked.

• Do you have any family that wrestled or are currently wrestling?

My uncle and several cousins wrestled.  My son wrestled for a little while but it was not for him.  It pains me to say this, but he is one heck of a –basketball- player. LOL

• Did you have any youth rivals?

The Davis’ and Josh Sickels from C.R. Prairie, Jase Jenson from Lisbon, Joe Reiter from Bosco, just to name a few.

• What was you high school record?

• How did you place at state each year in high school?

I placed 2nd my junior year.

• Did you have any notable or adverse challenges and how did it turn out?

I struggled a lot trying to make weight my sophomore year.  I missed several matches and tourney’s because of it.

I would like to have thought I had an aggressive style.  I didn’t shoot very often, but if I was on top, I would always try to hammer down and get the fall.

• Did you have any back and forth exchanges?

I went back and forth with Andy Frost from Bosco several times.

• Who was your most influential coach?

In high school, Bob Yilek was my most influential coach.  But growing up, I had some very good coaches.  Kurt Hinschberger, Chip Kalina, Al Billings, Jim Drahos, Ralph Gallagher, Dan Blanchard are some of the fellows I give credit to in shaping me and our team from the time we were youngsters.

• Was your team competitive in HS/College?

I would say our high school team was very competitive.  We started young and stuck with it all the way through high school, and won Traditional and Dual tournament.

• The last name “Kozik.”  Where does that last name originate from?

It is Czech.  I am a Bohemian.

• Where does Belle Plaine rank up there with all the other legendary teams?

I think Belle Plaine ranks up high with legendary teams.  We may not have the hardware that the most notable programs have, but any team with the right mindset and attitude is dangerous.

I would not trade my days at Belle Plaine for anything.  There were a lot of memories made that will last a lifetime!

• Who was the most influential wrestler you looked up to growing up?

Matt Hoover.  It was always neat watching him prepare and the hype of the match, no matter how big it was, got your blood pumping.  Watching him win, made me want to follow in his footsteps.

• Who are you favorite current wrestlers?

How can you not love watching these Iowa Hawkeyes?

• What tunes would you listen to back in in the wrestling days?

• What was the most upset you ever felt after a loss?

It actually was not on the mat.  The most upset I have ever been was losing my Grandpa Kozik.  He made the time to make it to as many of my matches as he could, regardless of his health and how busy he was on the farm.

• If you could go back and change one thing about your wrestling career, what would it be?

I would have listened to my coaches more and worked harder.

• What was your best wrestling memory or accomplishment?

My best wrestling memory was when we were seniors.  We were neck and neck with Bosco in the State Duals.  Derek Beal was at heavyweight and he needed to win.  The match started and he got taken down and got put to his back.  We thought we were finished and kind of buried our heads.  All of a sudden the crowd erupted and Derek reversed and pinned the guy.  We had just won the state championship and rushed the mat.  Amazing memory and a great feeling!

• Who were some of your most notable competitors in HS/College?

Jesse Montgomery from Tri-County.  Strongest kid I have ever wrestled.  We always had close matches.

• Did you wrestle all year or was it seasonal for you?

I wrestled all year long.  A bunch of us on the high school team did a lot of freestyle and greco in the offseason.  It wasn’t a big deal to get 150 to 200 matches in the summer.

• How would the guys from your day stack up against the guys today?

Wrestling today is different than when we were in high school.  Maybe I am biased, but I believe we were tougher back then.  No offense to the wrestlers of today, but it is a different time period.  Same as the fellows that came before us.

• Did you wrestle after high school?

I wrestled a little at Loras College, but it was not for me.

• What other sports did you play?

• What are you favorite sports teams?

• What are your hobbies other than wrestling?

Anything outdoors- hunting, fishing, camping, mushroom hunting.  If there is a season for it, I am probably doing it.

• How has wrestling shaped you as a person to this day?

Wrestling taught me to focus, work hard, be humble, and to set goals for yourself.

I work for Kinze Manufacturing in service and warranty, farm with my dad, and am a volunteer firefighter.

• Are you still involved with wrestling?

I am not involved with wrestling anymore due to work, but follow it very close.

• Any advice for upcoming wrestlers?

Listen to your coaches.  They have been there and have done that.  Work hard and set the bar high.  Believe in yourself.  If you lose, do not consider it a loss, but a chance to learn and grow.

• Any chance we see you wrestle again at an old timer’s tournament?

• Would you like to give a shout out to anyone you wrestled with, against, coached, etc?

My high school team.   There are too many names to mention and too many memories to go with them names.

What happens in college, stays in college.  But had some good times with him.

Funny Story:  Josh Stamp, Jacob Feuerbach, Paul Bradley, and I were wrestling at Nationals in Fargo, North Dakota.  We went to camp the week before for training.  They bussed us up to Fargo.  After the tourney, we were not aware that we had to find our own way home.  Paul’s mom and dad were in attendance and offered to take us home.  All of our gear, 3 bigger guys in the back seat and me in the front seat with Paul’s mom and dad.  Mind you, this was in a Dodge Dynasty…  To this day, I hate the smell of Cherry chew.  Those mentioned will know what I am talking about!!!