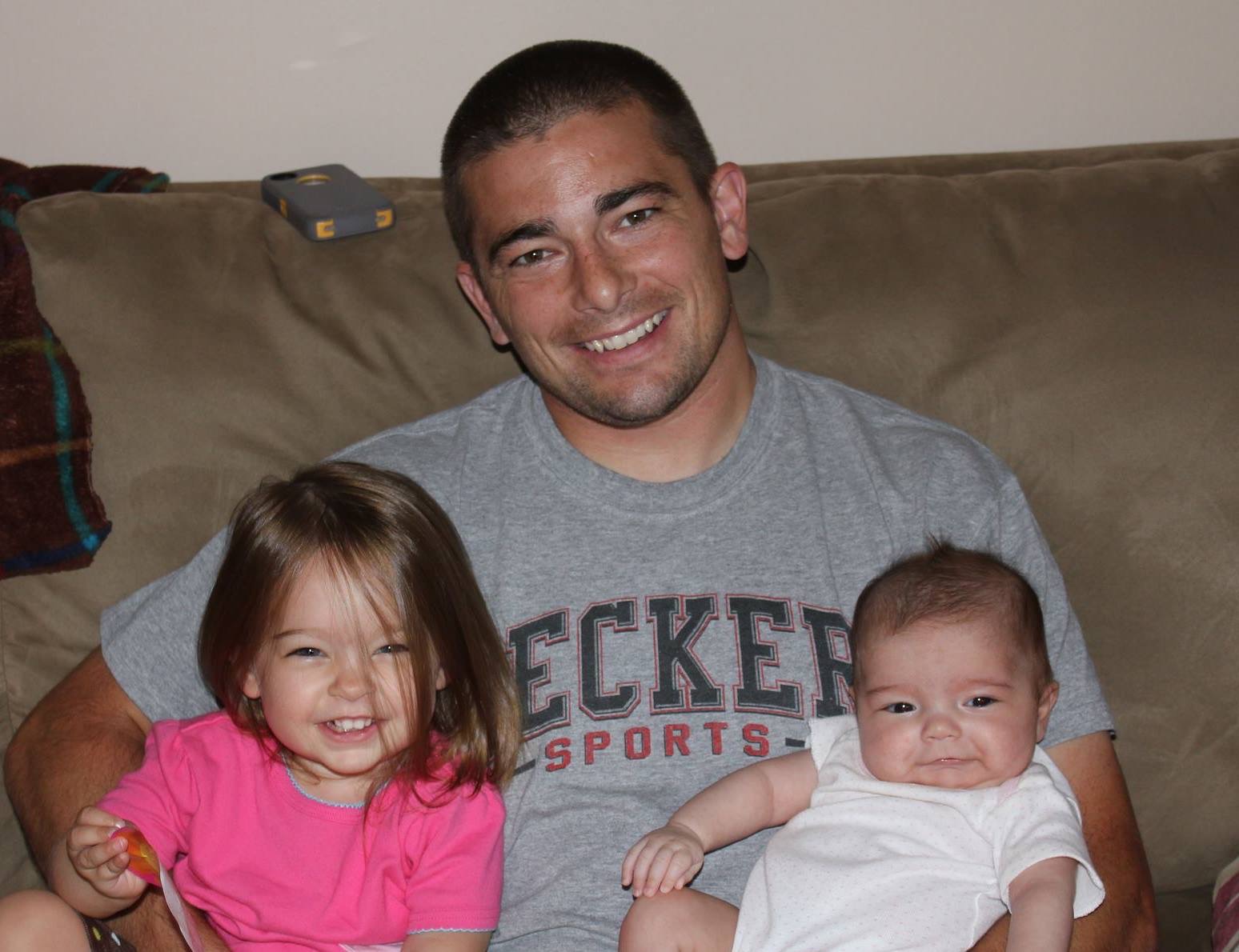 I’ve known of Mike Piper for a long time and have always liked him, although I hadn’t ever met him until a couple weeks ago. For one, he wrestled for Clear Lake and my cousins wrestled there. So we pulled for them. Secondly, this dude used to post on the wrestling forums and did something that you rarely ever see on those… he registered under his own name and was not anonymous like 99% of the other users are. I have always followed that rule myself, so he made a good impression on me, simply for doing that. And then when he posted, he was witty and not afraid to speak his mind. It was fun. After that, if I heard his name called to a mat at state or something, I tried to watch him if someone from Mepo wasn’t going. This dude good scrap!

My dad’s side of the family was big into wrestling.

I had 2 uncles that wrestled for Mason City. Todd was a State Champ, and Brad was a runner-up.

NOT GOOD! I always ran into Dusty Pollard and Derek Pike at little kids tournaments up here and would get the piss beat out of me. I think that might be part of the reason that wrestling took a backseat to soccer growing up. I only went to AAU Districts once, somewhere between 3rd-6th grade, and went 0-2 BBQ.

I was fortunate enough to stay healthy my entire high school career, so the only real moment that comes to mind is losing in the State Finals the way I did. In the end, I think I just learned a valuable lesson…Life goes on. As Web always said, “The sun will rise tomorrow.”

Easily Gary Weber. I wasn’t even going to go out for wrestling in High School. He was my P.E. teacher and hounded me to go to body fat testing. He was a great motivator, and I credit him for making me fall in love with the sport.

I’d like to think so. In High School, the North Central Conference was tough top to bottom, and that’s not to say it isn’t now. Iowa Falls, Eagle Grove, Humboldt, Algona…every dual was a dogfight. I think Clear Lake had made State Duals the year before I got into High School, and we made it back my senior year. We were the 8 seed though, and unfortunately got the E-Hawks first round. I think we only won 2 matches, but it was awesome to make it down there at least once.

I wasn’t as involved with the sport as much as I should have been as a youth wrestler, so I didn’t really have one.

Spencer Lee and Yianni because of their style. Drew Foster (I promise its not because of your Mepo connection) because of his drive and determination, its just an incredible story.

Losing in the State Finals. To be 5 seconds away from a state championship, only to freeze on the restart and piss it all away was a pretty miserable feeling.

Sealing the Regional Dual against Cresco my Senior year to get us to Cedar Rapids. We had tied them earlier in the year, and it was a goal we had talked about as a team every year. It felt good to finally get over that hump.

Mike Kist of Eagle Grove and Mike Zinnel of Humboldt. Kuper and I wrestled 4 times my Senior year, the last 3 being Sectional, District and State Finals.

Freshman year I had the “honor” of wrestling Goodale, Watts, and J.D. Naig at the Osage Duals. You can take your pick, but all 3 were pretty damn fierce.

How heated was that Clear Lake-Osage rivalry? I’ve heard stories about the dual meets between them being pretty intense.

It got pretty heated at times, but I think the fire was really stoked a few years after I got out of High School. After an incident at the Osage Duals, both A.D.’s got together and decided that they should take a break from competing with each other during the season. I think it lasted for a few years.

Aside from a week team camp at Nebraska, it was just in season for me.

I wrestled 1 year at Waldorf.

Soccer. I ran Cross Country one year and went out for football as a sophomore because Gary was the JV coach.

I had Michael Billings who was a year older than me, and a weight lighter each year in high school.

I used to trout fish a lot over in Decorah before we had kids. My buddies here in Lake Mills got me into golf a couple years ago and now I’m hooked. My group consists of 3 former Lake Mills wrestlers and a pumpkin-baller, but we don’t hold it against him.

I think every wrestler would say that it formed a strong work ethic for them. It taught me that nothing in life is ever given to you. You get what you earn, and if you’re not happy with it,

I think every wrestler would say that it formed a strong work ethic for them. It taught me that nothing in life is ever given to you. You get what you earn, and if you’re not happy with it, work harder.

I work in the Network Operations Center (IT) for our local Phone and Internet provider here in Lake Mills. I’ve been married for 12 years to an amazing woman who keeps me in line. We have an 8 and a 6 year old daughter, and just welcomed a baby boy 2 weeks ago.

I’m super pumped to have gotten my boy. We both know that a healthy baby is all that a dad cares about, but I’d be lying if I said I wasn’t hoping for a boy. The odds of him wrestling are pretty favorable. He’s going to be growing up around it. The girls wrestle each other at home occasionally, and its pretty entertaining to watch. I’m extremely happy with the growth of girls wrestling in Iowa over the last few years. I’ll let them make their own decision, but as of now they don’t have any real interest in it.

I’m in my 7th year as an assistant at Lake Mills and its been awesome. Brandenburg has a great thing going here, and the kids love it. Its pretty hard to compete with Bosco and Lisbon, but we were able to get a win over the Lions a couple years ago for 3rd.

The same thing a lot of us realize years after we get out of High School…listen to your coaches more. When you’re a teenager, you think you know it all, and there’s no way these old guys know what’s best for you. One of my biggest regrets is waiting to long to listen.

Not happening. When I’m not on the IR, I scrap with the boys in the room, and that’s plenty for me.

We’ve been fortunate enough to coach some great kids over the years at Lake Mills. Not one of them is more important than the other, but I’ll give 2 quick ones. One to Slade Sifuentes. His freshman year was my 1st year coaching, and we had very similar styles. I was younger and had a bigger gas tank back then. I hope he finishes his career strong with the Duhawks. The other would go to Gabe Irons. Hands down the most improved wrestler I’ve ever seen from Freshman to Senior year, and THE nicest kid you will ever meet. I’m not a teacher, and to this day he still calls me Mr. Piper. He looked like he should be guarding the paint on the basketball floor…deceptively strong. He’s playing football up at Bethel University, and I know he’s going to do great things in life.

We had a lightweight in high school who was a year younger than me, Cory Dwyer, good wrestler. He was hilarious! He would always try to get under our Heavyweights skin and was generally successful at it. I think it was at the Forest City Invite one year, he kept calling him an inbred until he snapped. He started chasing him around the locker room and we all had to stop him from beating his ass. Looking back, it probably wasn’t one of the wisest decisions for Cory to go after the biggest guy on the team, but kids will be kids.

I’d also like to thank you for what you do for the wrestling community. Your work on The Predicament, Pin Doctors and everything in between while working full time and raising 3 girls is just awesome. We’re lucky to have an enthusiast like you. I tip my hat!

Next post: 1997 3A Individual and Team State Champ Photos