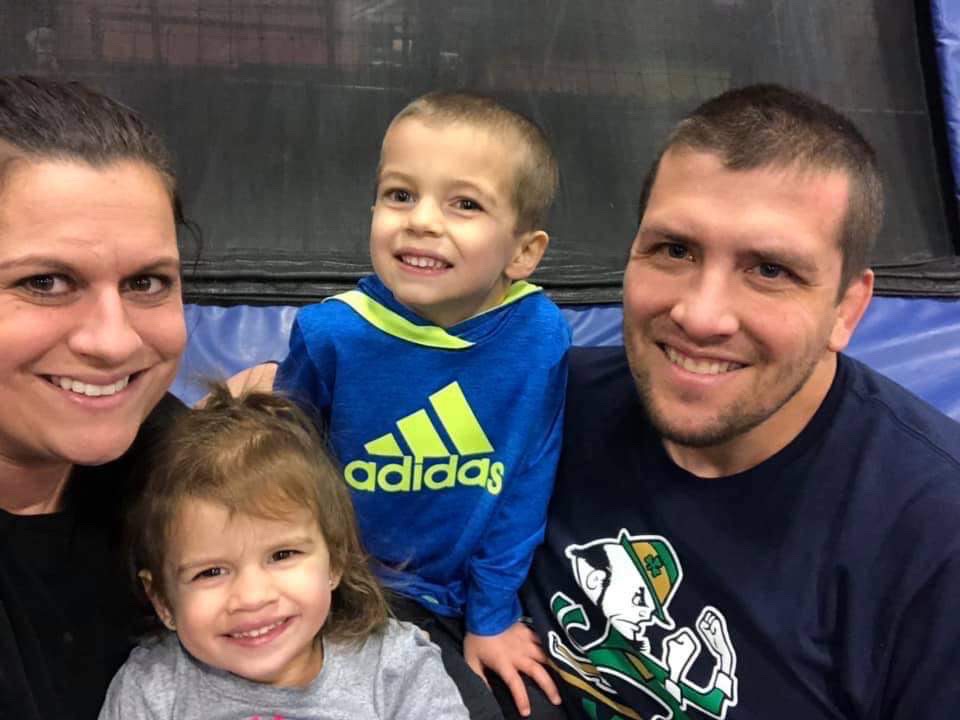 The Helgeson family! I wrote that with enthusiasm because the Helgeson family is awesome! When my brother, Justin and I hit the AAU circuit, we quickly became familiar with the Helgeson’s. Every year, Justin would have maybe Chris Helgeson or Dan Helgeson in his bracket and I would have Justin Helgeson or Brad in mine. It seemed like there were a ton of them. And they were all from Lake Mills! The last name, “Helgeson” has been synonymous with “Lake Mills wrestling” for decades now. And now, with the Helgeson family expanding throughout the state, the name is becoming synonymous with simply “great Iowa wrestling family.” There are a few Helgeson brothers from Johnston; Caleb, Owen and Jacob, I believe who are just absolute hammers… I mean, they are Helgeson’s, so I wouldn’t expect any different! And Chris is one of the best ones, which is saying a lot. The Helgeson family is full of great people, too. What’s always impressed me about Chris is his unbending self-confidence. He knew what he was capable of in wrestling and if the feat was within the realm of reality, you better believe he was going to be dead set on accomplishing that feat and would not doubt himself even slightly in the process. And the Lake Mills community knew his potential as well… they were just as confident in him as he was.  I’ve worked with Chris in the past on an Inside the Rivalry article for another media source and he was very forthcoming in terms of describing his experiences whether they were good experiences or terrible ones. I appreciated his honesty and willingness to state things precisely how he perceived them. He was very helpful for me. He is good for the sport. A man who wrestled at an unbelievably high level and compiled a spectrum of insight and experiences in the process that he is always willing to share in enthusiastic fashion. It’s great.
Iowa wrestling would be missing something if there were no Helgeson’s wrestling. Seriously, it just wouldn’t seem right not having them around at every big tournament in Iowa. They are, in my book, one of Iowa’s great wrestling families and I think we are just getting started with them!

I had a bunch of cousins my age and older that all traveled to little kid tournaments together when we were little. I wanted to be part of the group, so I tagged along.

I think I qualified every year for AAU state, placed 5th a couple times and 3rd my 8th grade year. No rivals that I can think of.

I would say the most challenging was wrestling Division 1 at UNI. You are on your own when you get to college. It’s a full-time job and then some juggling academics, practice and competition. I made a choice to cut a lot of weight to make the lineup. It was extremely difficult, but I did end up qualifying for Division 1 nationals 3 times. My goal was to become an All American but I fell short of that. I have no regrets.

7. Who was your most influential coach?

High School Coach Jamy Ball. He is a hall of famer and legend. He cares about all of his wrestlers to this day and he got us to stick with wrestling from a young age.

8. Was your team competitive in HS/college?

Yes, we were dual champs my junior year at Lake Mills and we went back and forth with Osage for the conference title every year. We never did get the traditional state results that we wanted. At UNI we were ranked in the top 20 and I think we finished 11th one year.

9. Who was your most influential wrestler that you looked up to growing up?

I didn’t watch much college wrestling growing up like I do now. I would say Jeff Helgeson. He was the oldest of all of our cousins and a big reason we all wrestled. I remember watching him in high school and thinking I wanted to be tough like him.

10. Who are your favorite current wrestlers?

This is a tough one. Wrestling has evolved a lot in the last 10 years. These guys are so good now and it’s tough to pick. I love the guys that put points on the scoreboard.  To name a few: Jason Nolf, David Taylor, Kyle Dake, Spencer Lee, Jordan Burroughs, Drew Foster, Bryce Steiert, Taylor Lujan and Joe Colon. I had to throw my UNI guys in there.

11. What was the most upset you ever felt after a loss?

My junior year I got called for an illegal slam from the rear standing position in the quarter finals. First of all, the slam was far from illegal. Secondly, the kid stayed down on the mat until his injury time ran out as told to do by his coaches. Once injury time expired, he got his hand raised and sprinted off the mat. He had no problem wrestling later that day winning his semifinal match. I felt like someone ripped my heart out after that match. I couldn’t do anything about it.

12. What was your best memory/accomplishment?

13. Who were some of your most notable competitors in high school? College?

Jesse Sundell and I probably wrestled 4-5 times between high school and college. We all know what happened in the state finals. I did finally beat him for the first time my senior year in college when UNI faced ISU in a dual. I wrestled Trent Goodale 3-4 times between my sophomore and junior years in high school. We had some great battles, but he always came out on top.

14. Who was the fiercest competitor you ever faced?

There were quite a few in college that could be on this list. Mack Reiter and Chris Fleeger come to mind.

15. Did you wrestle all year or was it seasonal for you?

In high school it was definitely seasonal. We did all sports in 1A, so it was tough to do much wrestling in the offseason. College was definitely year round for me.

16. Did you wrestle after high school?

17. How would you describe your wrestling style?

In high school, it was wide open with double legs and cradles all day. I put a lot of points up. In college it was simply trying to survive. So many guys were a lot better than me so it’s hard to say I had a style in college.

18. What other sports did you play?

19. Did you have good practice partners to help push you in the room?

20. What are your favorite sports teams?

21. What are your hobbies other than wrestling?

Doing anything with my wife and 2 kids. Also, if it was possible,and socially acceptable I would play golf every day.

22. How has wrestling shaped you as a person to this day?

You have lifelong friendships and bonds through the sport of wrestling. I’m still best friends with the people I grew up wrestling with. I think that’s important in life. My wife thinks it is crazy but that’s just the way it is. More than any other sport I believe wrestling can teach you hard work, discipline, patience, confidence, competitiveness, and the ability to be humble.  These are just a few things off the top of my head. These all come in handy with your career and family life.

I’m a Residential Lender at MBT Bank in Lake Mills. Come see me if you want to buy a home!

24. How fun is wrestling history to you?

I love wrestling history and still remember many of the matches from the state tournament back when I was in high school and even AAU. Pin Doctors is bringing back the good old days. Keep up the good work!

25. Are you still involved with wrestling?

Yes, my family and I moved back to Lake Mills in April of 2019. My son is in kindergarten so I’m helping out with the really little guys and also volunteering with the high school team. It’s been fun to get back into it.

26. Any advice for upcoming wrestlers?

Have fun with it especially at a young age. Don’t focus on wins and losses as a kid. Nobody cares what you did in 2nd grade.  I think it’s important to try other things and be well rounded. Other sports and activities can improve your wrestling as you are growing up. I did all sports growing up and I feel like that’s why I wanted to continue wrestling in college. I’ve seen to many kids get to the next level and quit or don’t pan out because they are already burnt out. As you get closer to high school and college try and be a sponge and figure out what techniques work best with your style of wrestling. You can learn techniques from the best coaches and wrestlers in the country today with sites like Flo. I would have loved that growing up. How you practice and live your life outside the room will directly translate to competition. You get what you put into it with the sport of wrestling.

27. Any chance we see you wrestle again at an Old Timer’s tournament?

I’m pretty out of shape. I would say no but buddies of mine talk about doing it every year, so I guess there’s a chance!

Next post: 1997 1A Individual and Team State Champ Photos