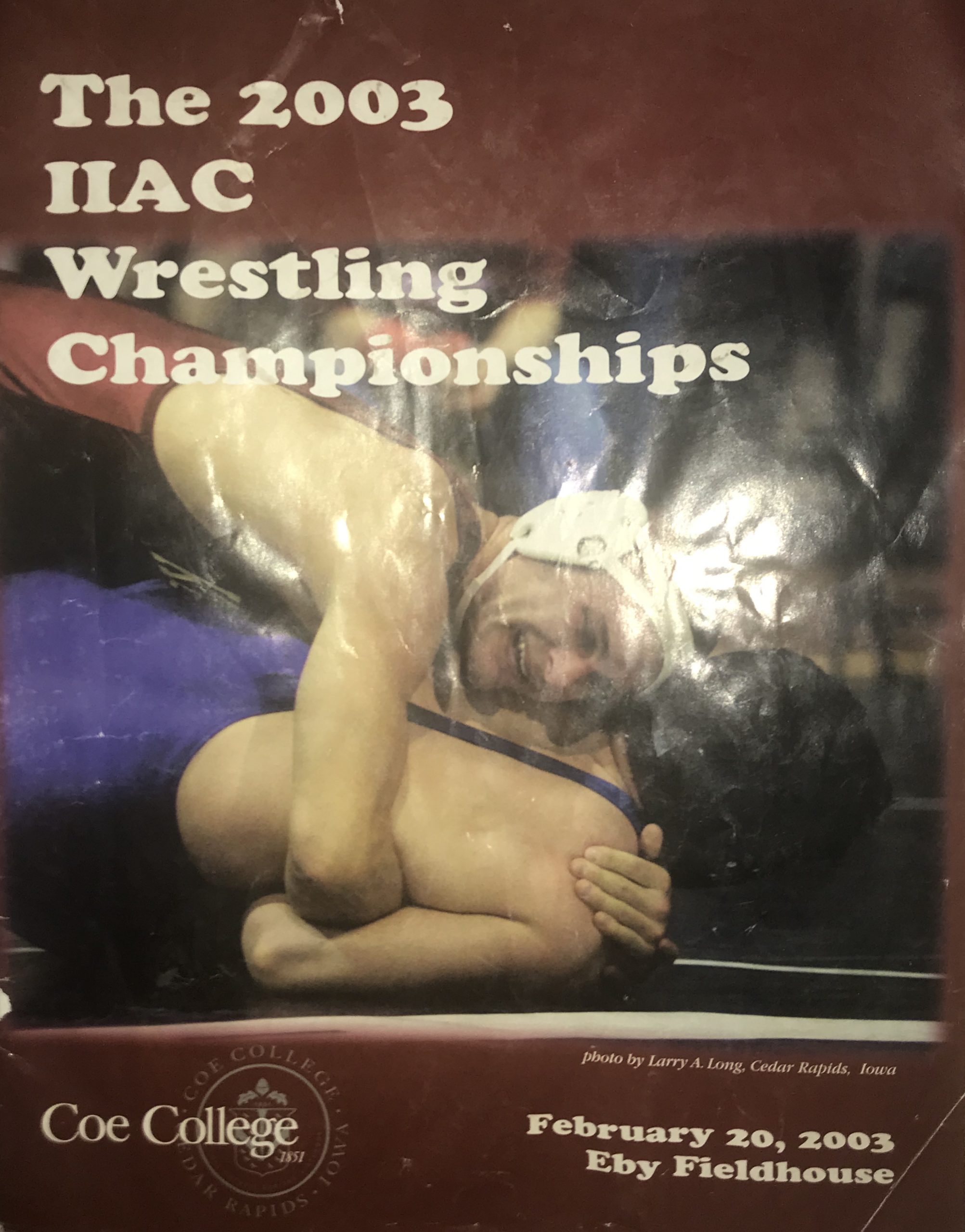 Coe’s Gary Franck wanted to know what the wrestling mats at the Concordia Open tasted like, so he grabbed Loras’s Joshua Swafford, beat and bruised him up badly and pummeled him into the wrestling mat until he was able to give the mat a full, detailed review on Yelp. Joshua Swafford barely survived the incident. Gary Franck shook Swafford’s hand and told him, “good job” when it was over, so mission accomplished!

* Ever have a match in which the outcome was not in your favor and you were beaten so soundly that the guy who beat you’s school’s Publications department thought it was so good of a beatdown (for them), that they made the decision to use a picture of that match for a high-profile tournament’s event preview? Well, I am the guy in the pic above!!! Don’t get too excited, I’m wearing the purple singlet and I look like I’m doing my best “turd floating around in a toilet bowl” impression. Seriously, look at me… It looks like a sloth fell off the rafters and onto the mat and broke it’s hip. And while laying down in a state of pain and laziness, Gary Franck jumps on top of it and starts smearing it’s face across the mat. I’m glad I could be such a nice prop for Coe’s Publications department and although I’m sure Franck was very photogenic in wrestling as it is, I’m glad I could give him a “boost” with that!

This Gary Franck dude from Coe was really, really good at quite a few things and I picked up on this while being beaten senselessly by him at the Concordia Open when this pic was snapped. Apparently, he was good at lifting weights. I rarely wrestled anyone who was stronger than me. He was stronger than me. Also, he had excellent manners. Gave a nice firm handshake and “head nod” before beating me senselessly. Patted me on the back and said, “good job” after he publicly destroyed my will. So he was real good at kicking ass politely. He was also good at making a late teen aged wrestler question his own presence in the wrestling realm. I remember walking off and thinking, “what in the hell am I even doing here when I’m getting roughed up like that in my first round matches at these things? This is embarrassing.” I finished that tourney ok… won 4 matches on the backside and placed 5th, I believe. I actually had a great day at that tournament in which I was the ever-lucky and photogenic “cover boy.”  I had 4 pins, 3 in the first period and pinned my finals guy in the 2nd period. KIDS, DON’T EVER LET ANYONE CONVINCE YOU A HEADLOCK DOESNT WORK IN COLLEGE!!! HOWEVER, this was the JV side of this tournament. I became Mepo’s 3rd ever D3 JV Iowa Conference Champ that day!!! The only one to do it for Loras that year!!!😂 Oh shut up, that tourney is tougher than people realize! 😎

Well, there’s all kinds of good stuff in that booklet I can post. For example, every D3 Iowa Conference team photo is in this book and I will post each of them.

I will start with the preview, though. 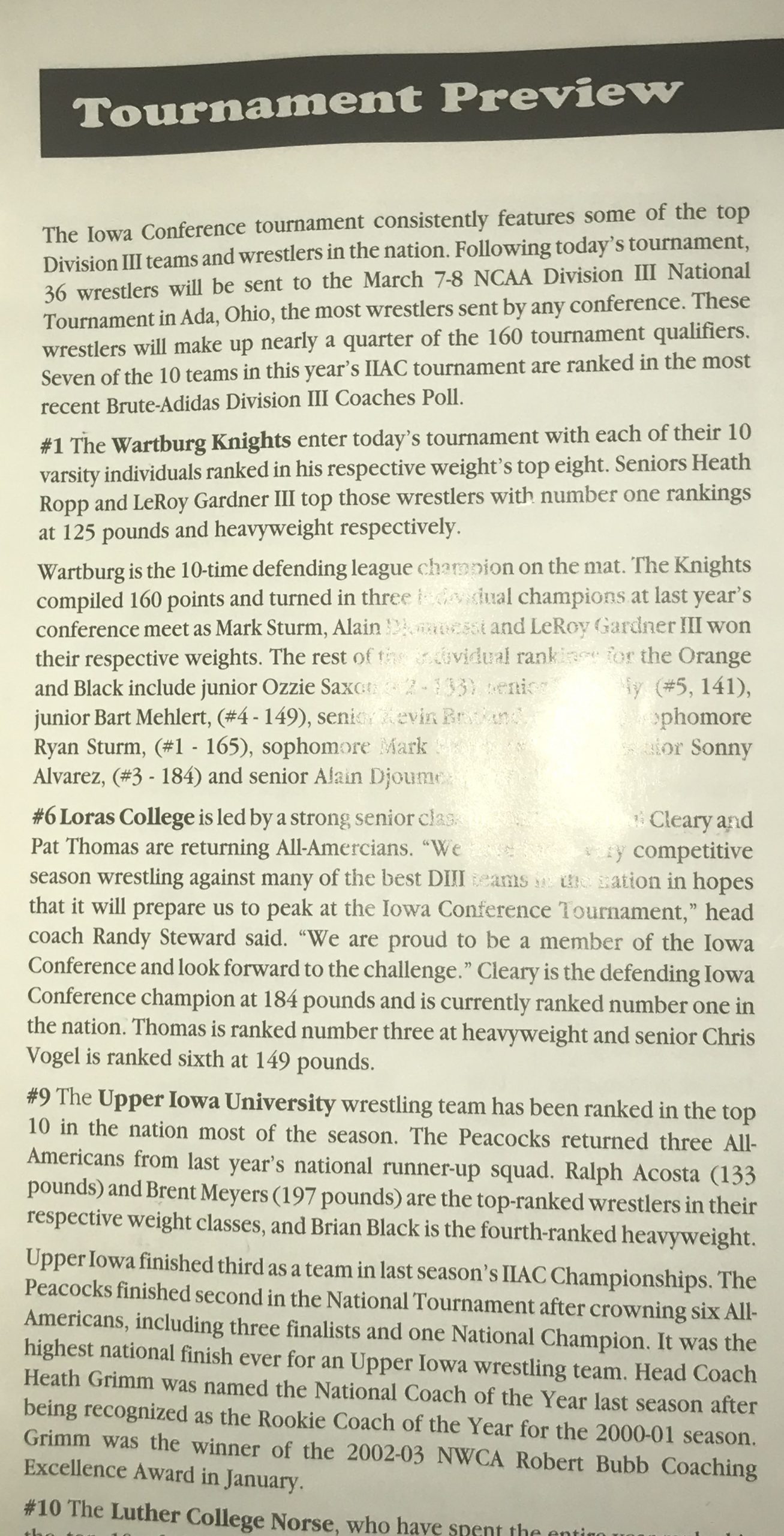 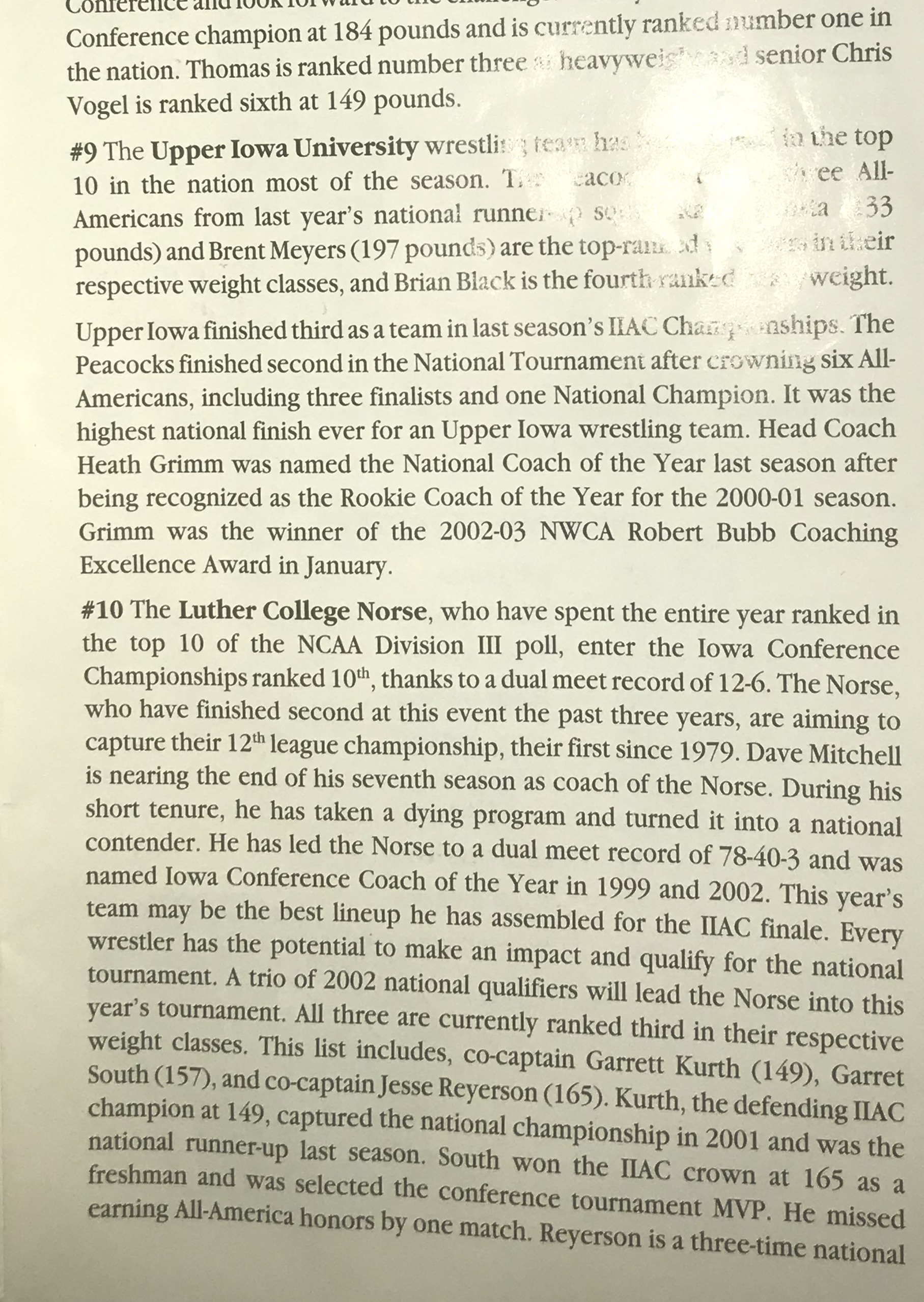