Always fun to cover the guys who made Lisbon wrestling, well…Lisbon wrestling, past and present. They are a perfect example of what a wrestling program/community should strive to be and Casey Baxa represents them well!!! For those of you who have not witnessed it, Lisbon HS has a cool hallway with several wrestling podium pictures and 8X10 photos of All-State althletes from other sports. I always wondered if the wrestling shrine prompted any Lisbon kids coming up to give the sport a try. 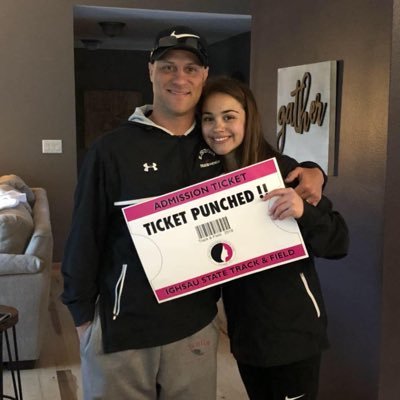 Growing up in Lisbon was enough to encourage me to wrestle. I think I was 5 or 6 years old when I first walked the Lisbon Hall with all of the state champions and place winners on the wall and immediately wanted to get my picture up there with them.

My dad and brothers never really wrestled. My wife and I have 3 daughters who like wrestling, but would never compete.

I didn’t really get wrestling at a ton of tournaments until about 6th grade. I remember really starting to take it serious around that age. As a kid I played a bunch of sports and activities. The best I placed was 7th at AAU state 8th grade year. Tony Brown won my bracket.

My freshman year I took some major lumps. I think I lost around 25 matches that year…I feel that season helped me the most the rest of my career.

I loved wrestling on my feet and taking people down. I loved working tilts on the top.

I remember getting beat my sophomore year by Jeremy Hoyt from Clear Creek Amana, he was a Senior ranked 2nd in the state and I never got a chance to wrestle him again that season, he was injured and never came back 100%.

Another guy I wrestled was Jeremy Fulk (R.I.P.) who I went 1-1 against. He was a very tough wrestler and an even better person!

Believe it or not, our Lisbon team only had about 12 guys on the team when I was in high school. I never competed in college. It was tough winning duals with the small group we had.

Tom Brands.  Also, growing up the most influential wrestler/wrestlers had to be Shane, Zach and Ike light from Lisbon…grew up about a half mile away from them and loved watching them compete growing up!

It has to be the last match I ever wrestled against Justin Stanley in the State Finals Senior Year.

I wouldn’t change a thing!

Definitely wrestling on Saturday night in the Barn! I wanted to wrestle Stanley my Senior year! Win or lose, I wanted to try to beat one of the best! He was just better!! But I gave it a shot! That loss motivates me almost daily and I respect the hell out of Justin Stanley!

In high school I wrestled Eric Jurgens, Tim Ironside, Justin Stanley and many other studs! I never competed in College.

I played baseball, football, wrestled, and ran track so it was a 3 month out of the year thing for me. I would throw my wrestling shoes into the closet and grab the track spikes and move from season to season. I never really wrestled freestyle in the summer because we were pretty good at baseball.

I would like to think we could give some of these young bucks a good battle.

I like to play as much golf as I can!

I am thankful for my wrestling experience and for the coaches I had while competing. Those experiences and people helped shape me into who I am today.

I am a service technician/installer for a Soft Water business in Mount Vernon called Neals Soft Water. I install Iron/Sulfur removal units, Water Softener’s, and reverse osmosis drinking systems. I am also the Head Boys and Girls track and field coach at Lisbon. This spring will be my 9th season and 8th as the head coach for the boys and 1st as head coach for the girls. The boys were state champions in 2015, 2016, 2017. I love working with the athletes! My wife Laura owns/runs a Salon in downtown Lisbon. We have 3 beautiful daughters Madison(20), Brynnley(16), and Kennedy(13) that also keep us on our toes and busy!

Just watch a bunch of it!

Keep working hard and never give up on yourself.

Coach Dean Happel is now one of my assistant coaches for the Lisbon boys and girls track and field teams. 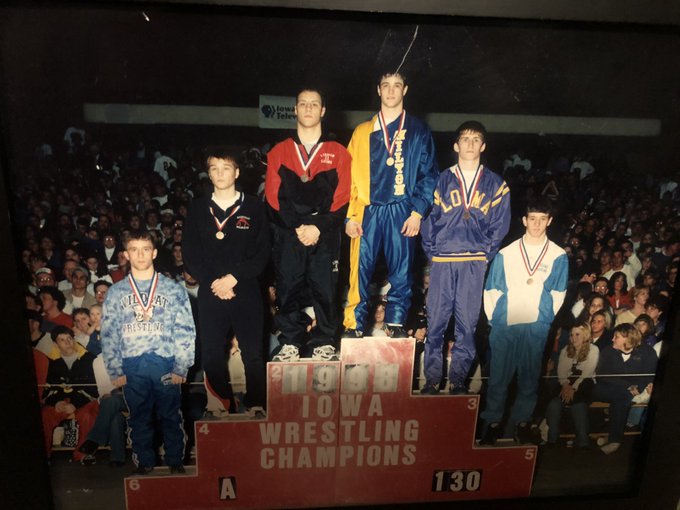