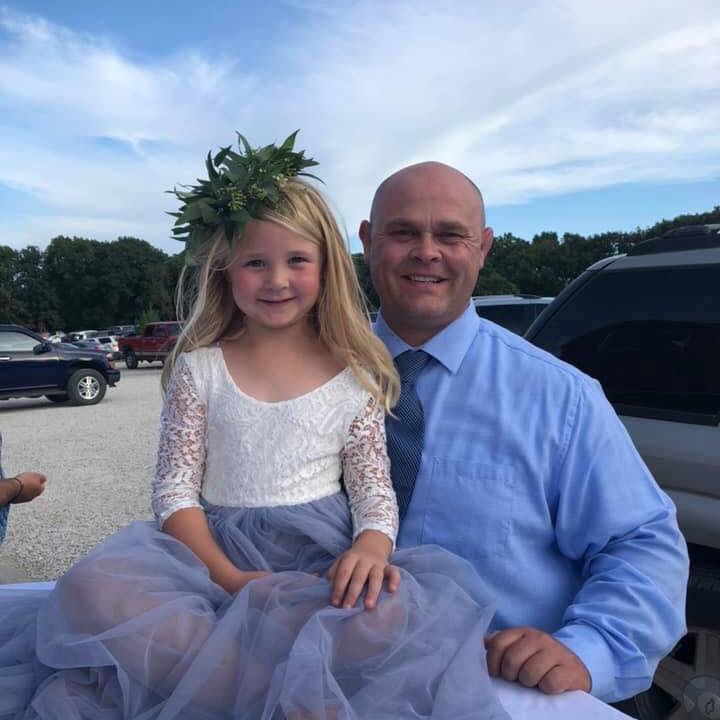 True story… When I was a 5th grader, I wrestled at 80 lbs the entire year. USA, AAU all at 80 lbs. Pretty common weight. Right in the middle. Anyways, Southeast Iowa had a standout in the upper weights from New London. When I say standout, I mean the guy won 3 AAU titles and when I say upper weights, I mean the guy weighed around 150 lbs. as a 5th grader. He was literally twice my size! He was already shaving. And he wasn’t one of your overweight guys either. He was tall and strong and looked like a man…and he was in just 5th grade. To be frank, he had a pretty mean look to him, which will make people laugh, for anyone who knows Steve, knows he is one of the nicest people on the planet. I remember sitting in the holding area as he was always the last one to be called to his bout sheet… no one really tried talking to him because a lot of guys were scared of him. And it seemed like he pinned everyone he wrestled in like :30. Several times, he was the big, huge, strong dude who wrestled all the really chubby kids.

Fast forward to our Senior seasons. 2001. We were both at 152 lbs. I had doubled in size since 5th grade and he hadn’t grown. One of my few losses that year were to him at the Quincy Invitational. I just could not stop the man’s arm-drag. He was so slick with it. He beat me handily…5-2, I believe. I remember thinking, “this is crazy wrestling Steve Blow and I never in my wildest dreams thought it would ever happen, and here I am.” When he stepped on the mat, it was like I was looking at that same guy who was twice my size at local tournaments just 7-8 years before it.

Fast forward to our Junior seasons in college. I wrestled for Loras, he wrestled for Coe. Steve was at 157 and I had to cut my ass off to make 184 lbs.

It is crazy how time sorts things.

Steve Blow… If you don’t like the guy, there is probably something wrong with you. You’ll never meet a kinder soul.

Who encouraged me? I can remember the high school kids coming down to the grade school to our class and they passed out flyers. I went home and told my parents that I wanted to try it. I went to one tournament that year… the New London Kids Tournament.

My brother Derin wrestled for awhile.

I won the AAU state Tournament 3 times and then placed 5th once and 6th once. Rivals? No, not really.

I qualified for state my jr and sr years. I went as the district champ my jr year and went 2nd behind Joe Storm from Columbus Jct. my sr year. Jr year I made it to Friday night, I believe. Mitchell from I35 knocked me out. Sr year I wrestled Cody Koeing from Underwood first round and lost to him 6-2. He went on to win it that year. I then lost my wrestleback 6-2. Koenig tied the wins record in his finals match that year, formerly held by Justin Stanley.

College didn’t go as I had hoped it would. I can remember one day, Coach O asking me if I wanted to quit. I told him no. Quitting is something I don’t do. I was raised to work hard and finish what you started. I think if I would have quit wrestling in college, I would not have ended up with my degree.

Coach Chiri and Coach Brian Swafford. They both pushed me. I can remember Coach Chiri taking me to Winfield to watch a Bigger, Faster, Stronger clinic. After that, New London started doing that weight-lifting program and that really helped me. He would also take a bunch of us up to Iowa City High for Freestyle practice and then buy pizza for the way home. It’s something I will always remember.

We were competitive but we also had a lot of open weights in high school. We had a lot of good individuals. Justin and Joey Garvey, Cully and Corbin Brumwell, Nic Chiri, Nate and Pat Henderson, Drew Kelly.

The most upset I ever felt was when I was coaching jr high wrestling at Waco. We were down at Van Buren and lost I believe every match. I told the kids I hated to lose and that we were going to work harder do that we wouldn’t have that happen again.

I wouldn’t change anything.

My best memory is making it to state my jr year, the district tournament was on my birthday that year.

It was kinda seasonal, but I would go to Iowa City for freestyle at City High like I mentioned earlier and I then I would try to go to a camp each summer. I spent a lot of time in high school in the weight room.

Coe College. College was very trying. There were a lot of times I wanted be done with I,t but like I said that’s not who I am. I am glade I did it. I got my degree and I met a lot of good friends like Adam Reid, Rocky Hamilton, Matt McCarthy, Nick Cole, Ryan Gotto, Brett Karkosh, Ted Drees, Luke Foor, Nick McTee, Adam McNeil,Wyatt Yates and lastly my friend, Mike McCabe from Cresco.

How would you describe New London’s wrestling style?

Football wrestling and track. Track was more something to do after wrestling.

I am a Hawkeyes fan.

Fishing and Bow hunting. It was my friend, Mike McCabe who got me hooked on bow hunting. He would tell stories in college and after college and I needed something to do so I took it up and got really into it. Now I enjoy taking my daughter fishing and seeing her do her activities such as dance.

The drive I had in wrestling I have today in my job. I want to be the best I can be every day when I walk into work and for my daughter.

I’m a Senior Correctional Officer at the Prison in Mt Pleasant.

Coached Jr High at Waco until my daughter was born.

To all my college teammates, I miss seeing you guys.