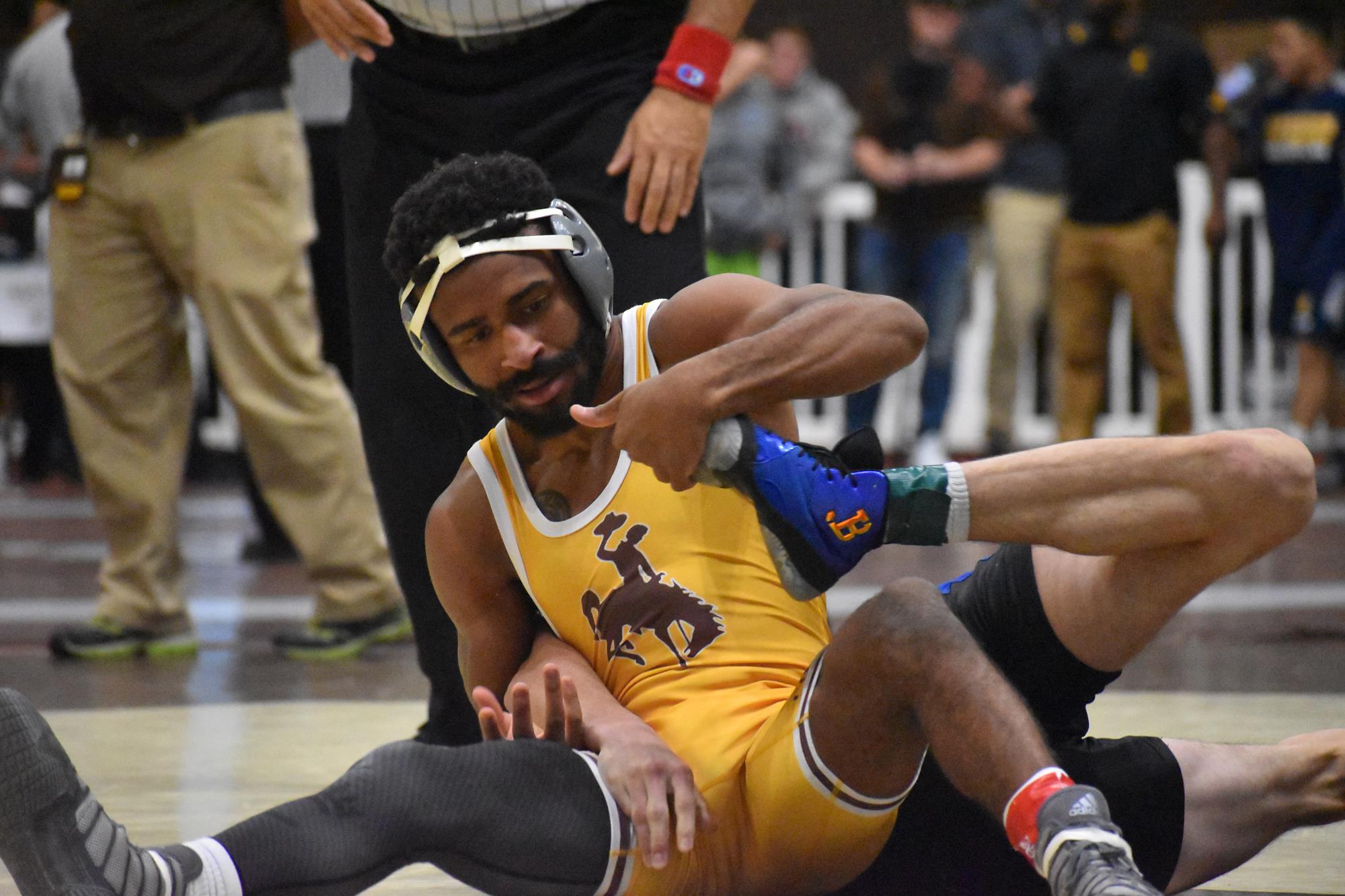 It’s hard to believe that as soon as one huge tournament ends in Las Vegas we head back to Nevada again for another annual tournament in the Silver state.  This time it’s in Reno for the annual RENO TOURNAMENT OF CHAMPIONS.

Looking quite a bit different than it has in years past, few teams return and new teams emerge.  While not as deep or prestigious as Cliff Keen, Reno still proves to be a rather good tournament.

Let’s take a look at the weight classes.

Last season Cole Verner of Wyoming took fifth place.  He looks to win this year’s title although he will have a challenge from Campbell’s Korbin Meink.  This should prove to be an exciting final.

Winning a title here two seasons ago and recently finishing as the CKLV runner up #7 Montorie Bridges of Wyoming looks to capture another title. #13 Noah Gonser of Campell and #20 Devan Turner of Oregon State should battle it out in the semis for a spot against Bridges in the finals.  What will be of most interest is to see how Utah Valley’s Taylor Lamont shapes up at this tournament. He had a rather disappointing CKLV. This gives him a great opportunity to bounce back.  Look for Fresno State’s Gary Joint to place in the top six.

Wyoming’s Sam Turner who won the title here last year has yet to compete this season.  That leads me to believe that #7 Josh Heil of Campbell should be our number one seed. His finals opponent should be one of two, either Zander Silva of Cal Baptist who finished fifth a year ago or Grant Willits of Oregon State.  Also battling for medals will be Cal Poly’s Jake Ryan and Fresno State’s Durbin Lloren.

This weight class has the potential to be the most interesting weight at Reno. It also has the potential to not be.  Lots of question marks here.  Utah Valley’s Matt Findlay was ranked #10 at the beginning of the season, yet he has yet to compete.  Same can be said about Oregon State’s Daxton Gordon, a former Division II NCAA champion for Cal Baptist. Another talented wrestler here is Mason Smith of Campbell, who hasn’t wrestled since the first of November.   With these three names up in the air, we might not see a single one of them. If that’s the case, I predict a finals between Wyoming’s Jaron Jensen and Fresno State’s Greg Gaxiola.  Jensen fared much better at CKLV finishing one match shy of placing as Gaxiola was taken out of the tournament early.  Nevertheless I still predict it to be a good match.

With as good as he wrestled at CKLV, I can’t see anyone challenging #13 Jacob Wright of Fresno State. He should take the title rather easily.

#16 Quentin Perez of Campbell settled for a bronze here two seasons ago, but this year stands a legitimate shot at taken home gold. I would say that Utah Valley’s Demetrius Romero would more than challenge him for the title, but from the looks of things he’s still out with injury.  With that known, Oregon State’s Hunter Willits is more than capable of upsetting Perez and bringing home the title himself.   In the fight for third will be two wrestlers who each finished one match shy of a medal at CKLV.  Fresno State’s Ricky Padilla and Cal Poly’s Bernie Truax.   A possible sneak in could occur from Wyoming’s Dewey Krueger.

This is going to be fun weight from the semi’s on forward.   #13 Kimball Bastian of Utah Valley should receive the number one seed.  The semi-final on the other side of the bracket should be between #14 Hayden Hastings of Wyoming and #15 Jackson Hemauer of Fresno State.  Bastian defeated Hemauer to earn his third CKLV medal in the round of twelve by a score of 8-2.  The number four seed here, should be Campbell’s Austin Kraisser.

A three way dance that I predict goes to Campbell’s Andrew Morgan who has pinned Fresno State’s Dom Kincaid in the past.  Also in contention here is Wyoming’s Tate Samuelson.

#7 Tom Lane of Cal Poly is the very definition of intestinal fortitude.  After losing by technical fall to Ohio State’s Kollin Moore he rallied off two impressive wins to finish third at the CKLV last weekend.  He’ll be challenged by Utah Valley’s Tanner Orndorff who finished one match shy of placing.  Forgotten in the shadows is Cale Davidson of Wyoming who finished as the runner-up here last season.  Also look for Fresno State’s Ryan Reyes to finish in the top six.

#6 Tate Orndorff of Utah Valley who finished in third place at CKLV, should be the number one seed here.  Campbell’s Jere Heino currently ranked #11 should be the number two seed.  The two met two seasons ago with Heino winning a 13-6 decision.  Not one to let Orndorff and Heino have all the fun, Wyoming’s #17 Brian Andrews finished second here last season.  He’s 0-3 against Orndorff but has kept it close each time.