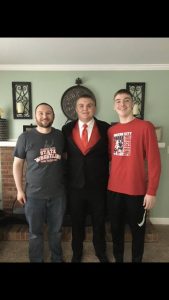 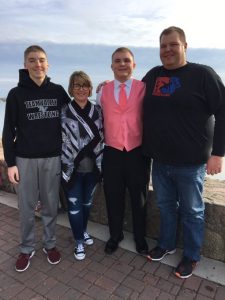 All three of my Sons have been involved in wrestling, My oldest Jordon wrestled for Mason City while he didn’t see the kind of success as Troy he found a different kind of success that has followed him to this day making him a great Husband, Father and teacher. My youngest son Riley is currently wrestling for Mason City and is working hard in the room looking for a great season.

I wrestled in the little kids program in Clear Lake as a kid, it definitely wasn’t the scene it is today! I again wrestled a little in high school but concentrated more on football. But coming from Clear Lake where wrestling is a big deal I stayed connected as most of my buddies wrestled, so I always knew I wanted my kids to wrestle.

Watching your sons compete is the most nerve racking thing you can experience, that’s just my opinion…

My proudest moments were definitely seeing all three of them get there first wins! When you see that smile from the mat makes you the proudest dad in the gym! But definitely seeing the success Troy had last season and the support he had from his two brothers is something I’ll never forget!

Absolutely 10O%, wrestling has taught them that things in life don’t come easy, it has also taught them that you have to work hard to achieve goals. And that sometimes you don’t always get what you want but you get back in there work harder to achieve that goal! It’s something that I see I’m my oldest Jordon to this day.

What do you have to say about the Mason City wrestling program?

I can’t say enough about The Mason City program! We have an amazing group of coaches who aren’t just building wrestlers but building great young men! I couldn’t have asked for a better group of guys coaching my sons!

When Troy started out as a pre K wrestler he was a member of Mason City Knight Hawk Wrestling, he had 2 great coaches Todd Krieger and Jim Gribben. Troy will tell you to this day how those guys helped shape him into what he is today! At the high school level Dusty Rhodes, Andy Thompson, Jake Phillips and Justin Faught these guys do such an amazing job with these kids! To quote Dusty “When our kids leave here they truly love wrestling” and you know what he’s right! Carl Valley is another one, he helped push Troy to that next level showing him that just because he wrestled HWT didn’t mean he couldn’t be active and not just stand in the center of the mat. The last person is a man by the name of Don Berry, Don did a lot for my oldest in the sport Don is a great member of our wrestling family and cares about not just my kids but all kids!

I would say it was a gradual process, for Jordon it was mare his upper high school years , Riley seems to be turning the corner now. For Troy it was his eighth grade year where I really noticed that he had something special in him with this sport.

Last year, 3A 285 was pretty crazy. Your son proved himself several times through the course of the season that he was right there with anyone at the weight by winning Keith Young, CIML, etc. Although things didn’t go as you’d hoped for at state, how cool was it that Troy made the statements he did last year?

What Troy did last year was pretty amazing, it was fun and I couldn’t be more proud of that kid! Obviously he didn’t get what he wanted but like he said “I’m not done yet”

I played football that was my favorite sport then

We love to hunt, fish go to sporting events and spending time with family and friends.

I interviewed over 100 kids last year. No one was more polite and well-mannered than your son. How proud are you of that?

Very proud ,it makes us as parents very happy to know that we have raised a good one!

Troy really likes Upper Iowa, it’s definitely been an adjustment for him and he knows it’s a process. He’s in really good hands over there, Coach Grimm is doing great things there and Troy is happy to be a part of that. The coaches over there are a lot like his former coaches so that really helps. Although he’s sidelined with an injury right now he’s working hard to get back on the mat and work towards his goals.

My advice would be to always support them during the highs as well as the lows! Help pick them up when they are down but also push them to their potential and just love them!