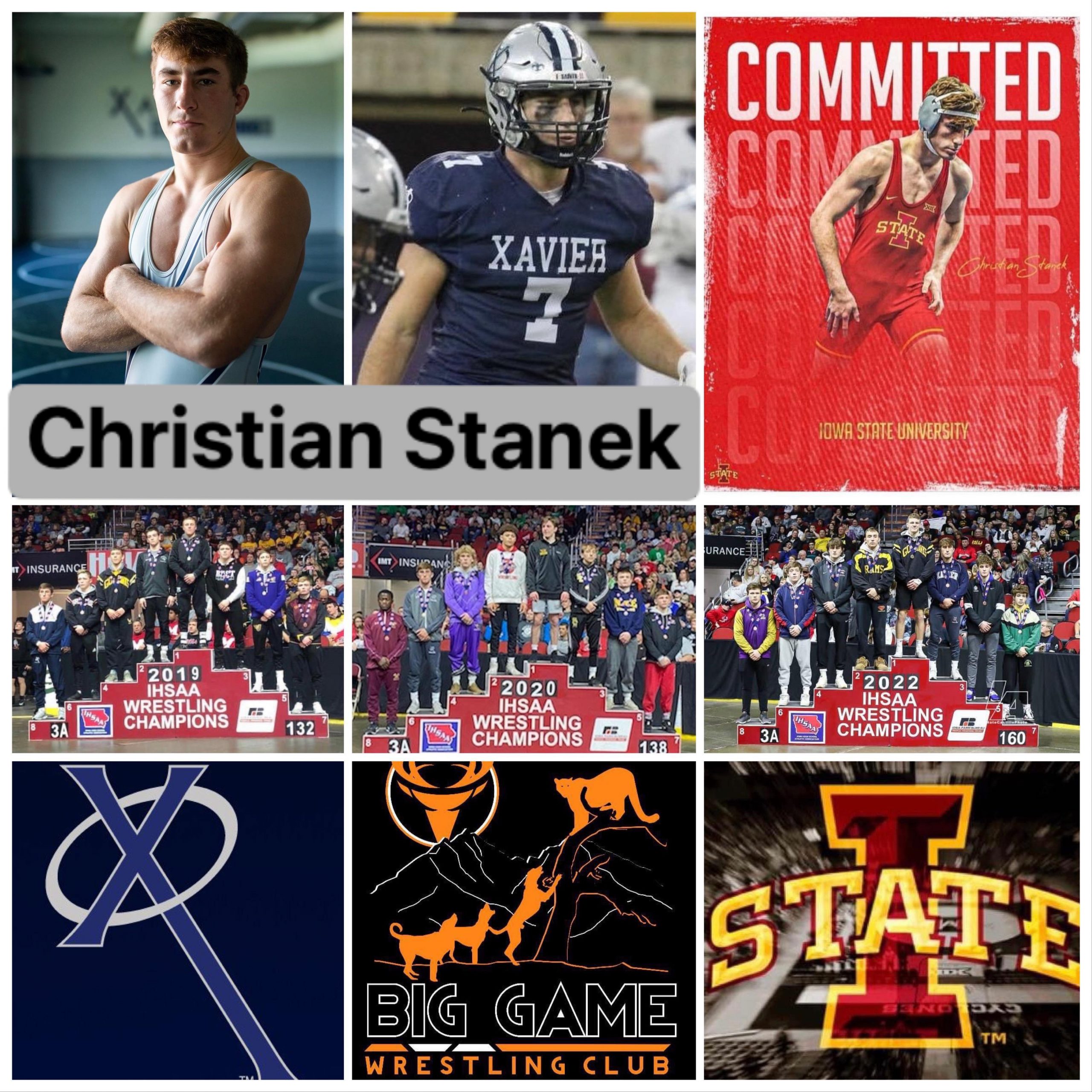 I don’t know if this is true or not, for I’ve only heard this story via “hear-say,” but word is, this kid went out for wrestling inadvertently as a young kid and essentially started wrestling because of a mistake. I heard he brought home a flier from school that he thought was for boxing or Karate, but it was actually for wrestling and he didn’t know this until he attended the practice. Thank goodness he apparently liked the experience, for the 2022 Iowa HS Graduating Class Of Wrestlers would be incomplete today if it didn’t have Christian Stanek in the mix.

Out of all of Iowa’s “in-state” Division 1 recruits/commitment to take place in this 2022 graduating high school class, Christian is one that sticks out to me as being a “sneaky-good” pick-up and potentially a “steal” of a recruit that the Iowa State Cyclones received a commitment from in late November this past year… This kid isn’t regarded by the wrestling recruiting pundits/die-hard fans as being any sort of a “can’t miss blue-chipper recruit” as of yet. To this point, he hasn’t really ventured out to the national level in terms of competing and what-not. Also, he semi-recently finished a HS career in which unfortunately, never resulted in him standing on top of the Iowa HS State Wrestling podium, for he was a 4X placer in HS going 8-6-3-3. In fact, a lot of Cyclone wrestling fans may have perceived his recruitment as one that may have been made only to provide the Cyclones with depth or “room guys” considering the fact that he does not fit the typical profile of the standard “can’t miss blue-chipper” recruit who is flourished with a full-ride and what-not. BUT HEAR ME OUT… Christian Stanek epitomizes the type of college wrestling recruit in which if you were to predict how he were to do based on his HS wrestling stats/resume, your prediction(s) may be way off, for Stanek’s HS wrestling does not tell the whole story with him… Not at all. I’m not sure if some fans realize how much potential this kid actually has.

So to start and as mentioned, Christian Stanek came into CR Xavier HS as a highly-anticipated Freshman, for he was an AAU State champion as an 8th grader and he lived up to the expectations, for he became a 4X HS Placer. I don’t know what your standards may be for wrestling, but with my own standards, being a 4X placer is GREAT. He placed 8th at an upperclassmen-infested 3A 132 as an undersized Freshman in 2019 and finished with a record of 33-12. He was 6th as a Sophomore at 3A 138 in 2020 and finished with a record of 39-8 that season. Christian was 3rd at 3A 145 as a Junior in 2021 and finished with a record of 38-1, his only loss that year coming to Dreyzon Phillips of Fort Dodge at the state tournament. He was 3rd again as a Senior at 3A 160 this year and finished with a record of 37-5 with his 5 losses coming to a combination of one 3-2 loss to 3X State Champ, Robert Avila (IC West), two to 2X state champ Aiden Riggins (W-SR), 2X 3rd placer in 2A Allen Catour of Assumption and 2A State Finalist, Garrett Seaba of Clarion-Goldfield. He had a career record of 147-26. On top of this, Christian won the very tough MVC Conference Championship Tournament at least twice, maybe two times.

As mentioned, to my personal standards, Christian Stanek put together an outstanding HS wrestling career. A 4X placer who started out at 132 as a Freshman which included two performances in which he only lost one match at the tournament?! To me, that’s great, but of course I only placed once myself. However, some of your more cynical wrestling critics may have had him written off as a legit D1 recruit from the moment they read that he didn’t win state or didn’t do as much at the national level as the typical “blue-chip D1 recruit.” If you are swaying near that side of the fence, I’d like to ask you again to please hear me out on this kid.

Christian was/is a member of one of the toughest wrestling “super-clubs” in the state…Dylan Carew’s Big Game Wrestling Club. While he hasn’t competed in as many offseason wrestling events compared to most of the kids who are part of that club, the fact that he routinely attended those practices says a lot in itself, for Christian is a wrestler who can be classified as a type that is becoming somewhat of a dying breed in our sport the more time goes on… the multisport wrestler. This is the type that my entire family would probably be classified as, so I have a personal affinity for these types of wrestlers, especially in this day and age when being a multi-sporter wrestler is to a certain extent is discouraged by many and a large percentage of these guys can be disregarded/ignored on the recruiting trail. These days, most elite-level HS wrestlers with serious D1 wrestling collegiate aspirations are encouraged to specialize in only wrestling if they have any realistic goals of competing at the that level, especially when it comes to 3A wrestlers, like Christian. While some of Christian’s workout partners at Big Game WC were able to focus on wrestling and only wrestling, all-year-round, before, during and after practice, Christian on the other hand would attend the same workouts, but AFTER he was finished with football or baseball practice. Which leads me to reason number 1 as to why I believe Christian Stanek may be a sleeper recruit at the D1 level… Which is the fact that he has great athletic versatility/adaptability and has absolutely proven it. Christian was very involved in multiple activities in HS along with wrestling and has succeeded/performed at a high level at everything he has done in HS. He is a high honor student, a standout on the baseball diamond and an absolute FORCE on the football field. Christian was part of a 2021 CR Xavier football team that was 2nd at the state football tournament this year in class 4A and was a triple-OT finals loss to CB Lewis Central away from winning the championship. Stanek was absolutely one of the most important components which led this team to these great heights. Christian was a nightmare to opposing football teams, for he had to be accounted for on almost every play of the game, for he was outstanding on both sides of the ball. He was 2nd team all-state LB on defense and was a TD-scoring machine as RB on offense who had scored something like 7-8 touchdowns combined in the 3 games leading into the state finals. If an opposing team failed to pay close attention to Stanek when they played CR Xavier, he would create a plethora of problems for them. In fact, he had the ability to create a plethora of problems for opposing teams when they DID keep a close watch on him, for he is just that good of a football player/athlete. And he is obviously held in high regard by his teammates, for he was voted as a team captain, to boot! That speaks volumes as well, for it indicates that he has a good head on his shoulders and is respected by his peers/teammates. That can go a long way and not all high-level athletes can say they accomplished that feat. Ok, so what if Christian didn’t beat a bunch of world-beaters at Fargo Nationals over the summer… he obviously was making the most of his time away from events like these at football practice. Not like he was at home twiddling his thumbs. He was working on other goals and ACCOMPLISHING THEM as well! So what if he wasn’t a Preseason National Tournament champ. Can you really knock the kid for that, considering that while PSN and other tournaments like it were unraveling, Christian was helping lead his HS football team to a runner-up finish at state?! I doubt Christian would trade that experience for a dozen PSN titles… I know I wouldn’t. You only get one time in your life to experience those moments with your friends. The fact that this kid accomplished what he has accomplished in multiple sports besides wrestling does not indicate to me that he isn’t a viable recruit due to not being a full-time wrestler in HS, like most D1 recruits. To me, it reflects his athletic versatility and makes me wonder how much more he could accomplish once he gets on a full-time wrestling schedule. Nothing wrong with a guy who has PROVEN tremendous athletic upside.

To any of you Cyclone fans who may be reading this, if you are unfamiliar with Christian Stanek, I’d be excited about what he can do! He could be the low-risk/high-reward type of recruit, similar to another guy from the 80’s who placed 3rd at state as a Senior and never won state. His name was Eric Voelker and he became a 2X D1 National Champion for the Cyclones… Do NOT sleep on this kid. There is a ton of reason for optimism with him.

Props to CR Xavier HC, Ryan Chambers for producing the hammers that he has over the years.

Congrats Christian on a great HS career! You may not have won a state championship, but you did enough to convince me that you are one of the best wrestlers in your grade!