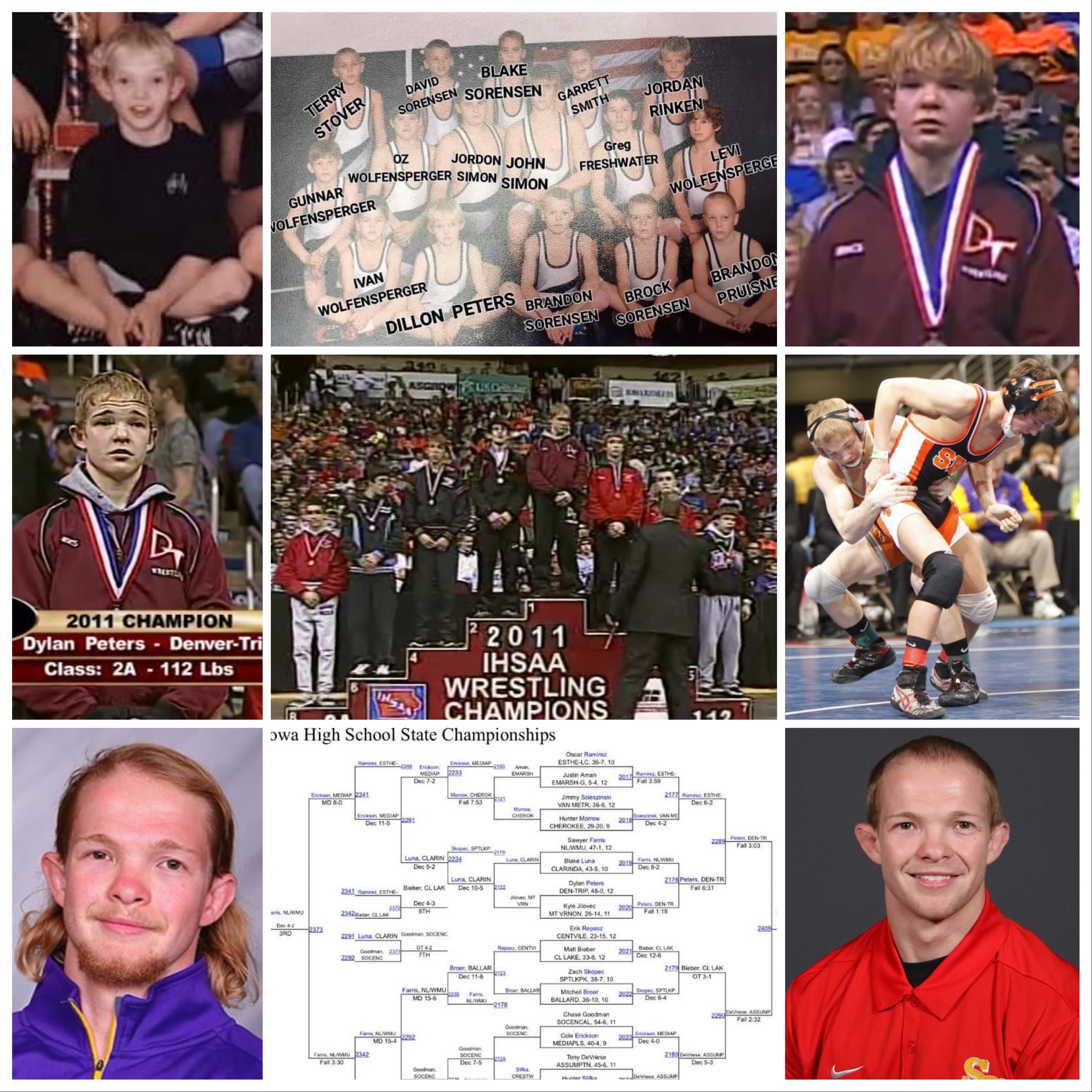 Wait a sec, Dylan Peters is a 3X state champ, not a 4Xer… how can he have a case for being the Iowa HS Wrestling GOAT?! Well, to start, he finished with a career record of 199-1 and his one loss was in the 2A 103 state finals as a Freshman in HS when he was rumored to be weighing 85 lbs on full-feed when he wrestled his finals match…and he only lost that match 8-4 and was starting to storm back at the end of that match and had the crowd all pumped up…That was his ONLY HS loss…. Catch your attention yet?

Dylan Peters wrestled for HC Chris Krueger at Denver-Tripoli HS. Dylan really didn’t have any noticeable flaws. I can’t think of one thing in his game that he wasn’t just absolutely top-notch with. He was one of the strongest guys for his weight ever. He was quick. He had a great gas tank. He was always prepared and has a good head on his shoulders. He was smart and always knew the match situation. He was ALWAYS in great position. This guy… he was just deadly. He was really good at this “pancake/whip over” throw and if he were to catch someone in that move or heck, in a scramble/situation where he could even attempt that move, it was like a death sentence for the other guy. It was like Mike Tyson’s right uppercut. Game-over most the time. He set that thing up and timed it perfectly. Every guy he wrestled knew he had that and just couldn’t stop it for he was so good at it. There wasn’t much they could do…. An opponent of Dylan would only have one hope of not putting themselves in a situation where he could hit that move… and that’s by just running away the entire time. It was unavoidable, for Peters could hit that move from so many different situations. And when he’d bury someone out there, the crowd LOVED it. He is one of the biggest crowd-favorite Iowa HS wrestlers ever. There seemed to be a mob of people who just loved watching him wrestle… from all over the state. Which was impressive, for usually people are fans of HS wrestlers from their own geographical area. Peters’s style was so lethal, so dynamic, so fun to watch, that when he wrestled, a ton of people would drop what they were watching before so they could start watching Dylan Peters wrestle because they knew that over 90% of the time, he would just bury whoever he was wrestling and would look like a monster in the process.  He was like an executioner out there.

So Dylan came into HS state wrestling in 2009 at 2A 103 weighing 80-something pounds on full-feed and had a 47-0 record coming into the tournament. It was 50-0 when he took on Alex Spooner of Forest City, a full-sized Junior 103 lber. Dylan got behind early in this one and spent a lot of the match trying to come back… in which he did start gaining some momentum towards the end of the match, but there wasn’t enough time left. He lost 8-4. This was first and only time Dylan Peters ever lost a HS match. He won the rest of them along with 3 state titles and looked like a buzz-saw in doing so. 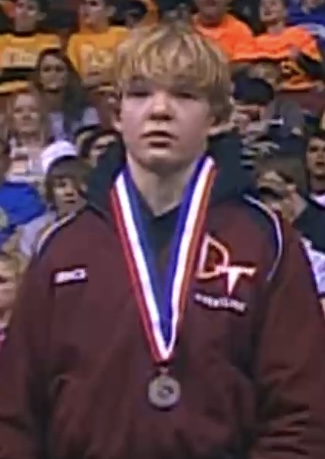 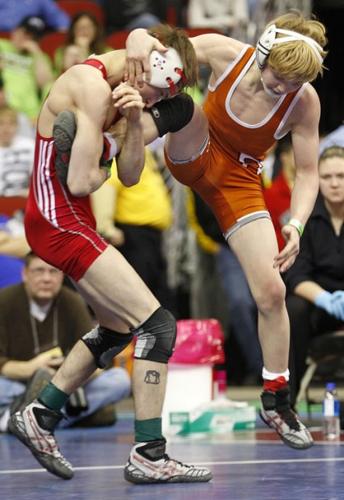 As a Sophomore, Dylan won his first state title and was 51-0 in doing so. He defeated Colton McCrystal of Sergeant Bluff-Luton in the finals in a dominant victory. Two guys on the stand with him that year were multi-state champions… McCrystal won 2 and 7th place Doug Miner Of Spirit Lake Park won 3.

As a Junior in 2011 at 2A 112, Dylan won his 2nd state championship and finished 50-0 on the season. He beat Colton McCrystal in the finals again and was dominant in doing so again. He beat him 13-4. That was a pretty big deal for McCrystal really started to step things up and catch fire in his wrestling game when he hit HS and it seemed liked he was beating everyone…dominating most… except for when he’d run into Peters. Those 2 state finals wins that Peters had over McCrystal were very impressive. 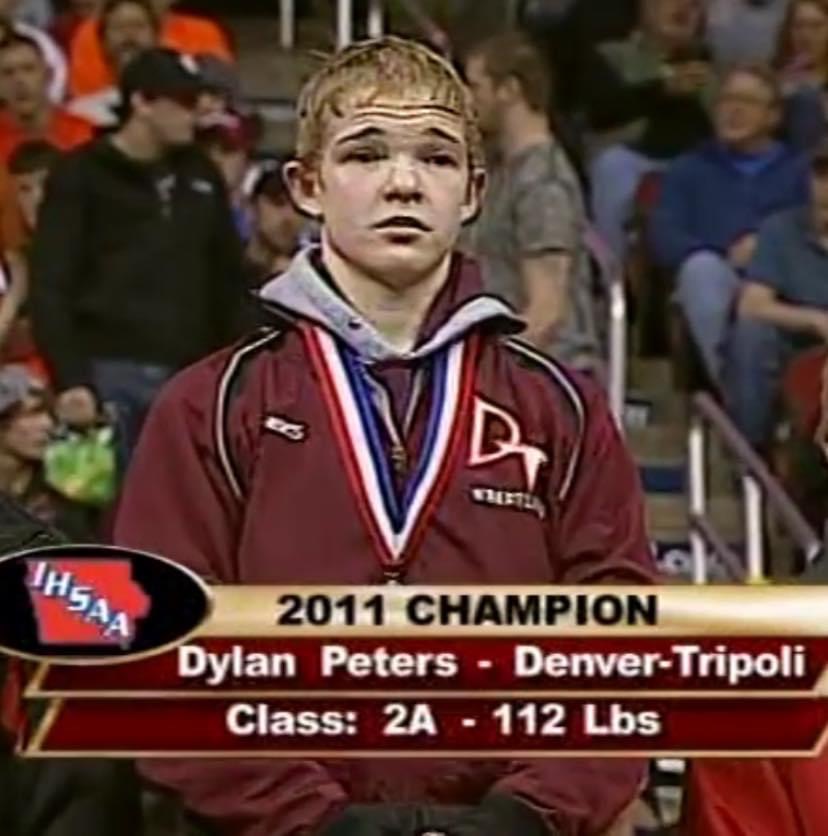 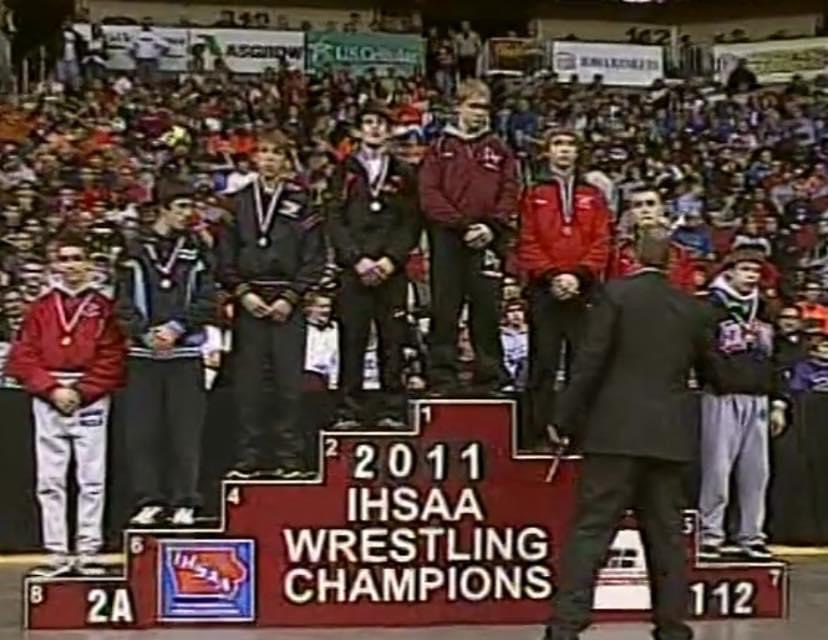 As a Senior, the Dylan Peters train was in overdrive. He was dominant as usual during the regular season. It seemed like at that point, you rarely heard of him going a full match. Seemed like he was pinning everyone. He got to state with a 44-0 record and pinned his first opponent quick, which set up a quarterfinals match with a guy named Sawyer Farris of New London. This match was very highly anticipated by the wrestling community, for Farris, a Senior, was a 3X placer/2X state finalist/1X state champion coming into that match.  Peters at this point had developed a reputation as being someone who seemed borderline unbeatable. However, Farris was a former state champ and was held in high regard himself, especially in SE Iowa. There wasn’t ever anyone who went out and destroyed Sawyer Farris when they wrestled him. He was a fiery competitor who gave anyone he wrestled all they could handle. And while there were a lot of wrestling fans who assumed he would be dominated by Peters, it was certain that Farris didn’t think so. He always took the mat with a ton of confidence and carried himself as if there was no doubt in his mind he was going to defeat whoever he was facing. The match between these two ended up being one that people still talk about today. It is widely considered one of the best matches of all time. I consider it to be the best match I have ever witnessed and as far as I know, the best match that’s ever been wrestled at state. To summarize, there were a ton of scrambles and exchanging of points and the match went into OT, which was rare for Dylan Peters. Dylan ended up winning this match in OT. This was a rather impressive feat for Peters, for he was not used to being in an OT situation, for it was rare for him to ever face someone capable of keeping it close against him…. It was impressive that he was able to maintain his composure and concentrate enough to walk away victorious. Here was the interview with Peters after the match…Dylan gave Sawyer Farris credit by referring to him as his most intense match he ever had:

Dylan proceeded to pin Oscar Ramirez of Estherville-Lincoln Central in the 2nd period of the semis and then pinned Tony Devriese of Assumption in the finals in the first 40 seconds. Made it look easy. Peters secured his status as a 4X finalist/3X state champ and had a career record of 199-1 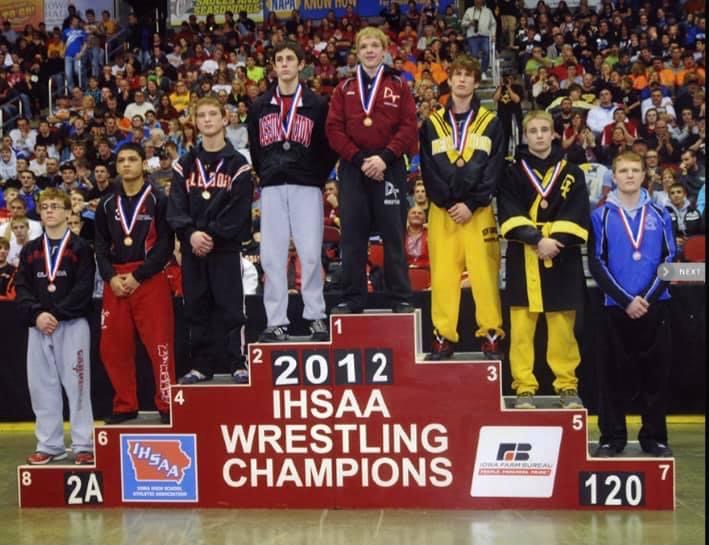 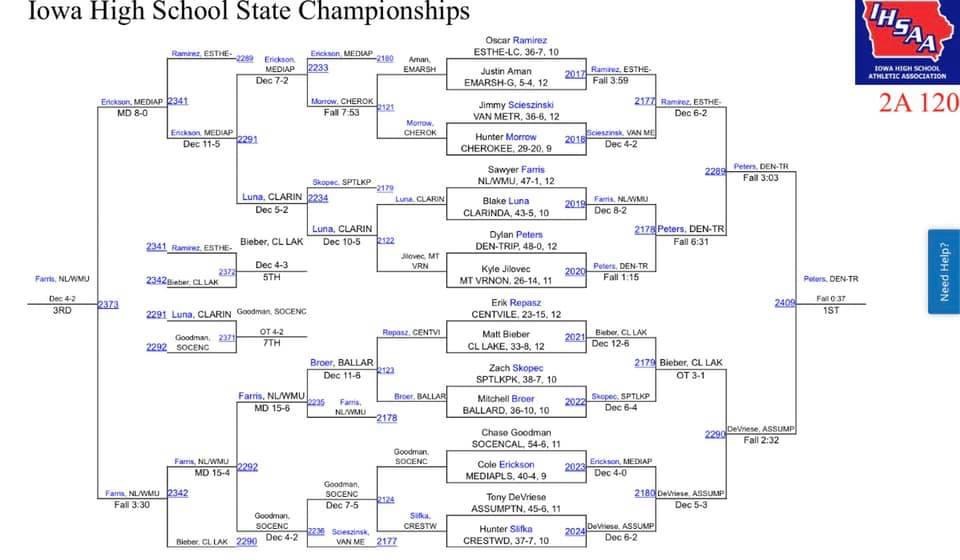 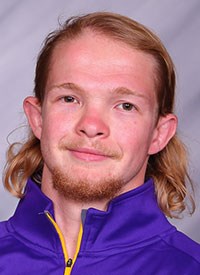 Dylan Peters went on to wrestle D1 for the UNI Panthers and to absolutely no one’s surprise, he had success there. He was a 4X national qualifier at 125 for the Panthers and was a 2X AA. He finished with a collegiate career record of 85-26.  He is also 5th on the all time list of UNI Panthers with 38 career falls. 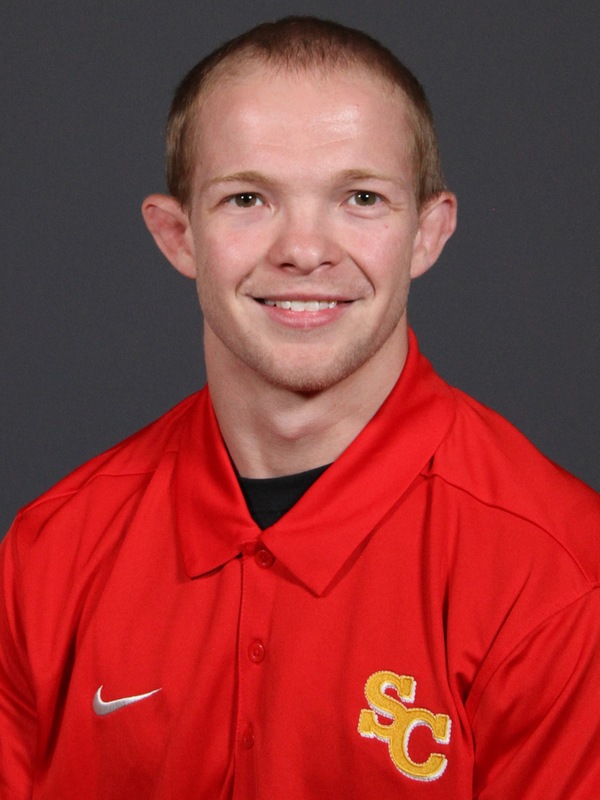 Dylan is now the head coach at D3 Simpson College. They have a star-studded staff at Simpson that includes the likes of Dylan and 4X undefeated state champion/Iowa Hawkeye great, Jeff Mcginness of IC High. Two of the greatest Iowa HS wrestlers of all time on that staff. Amazing.

Does Dylan Peters have a case for being considered the Iowa HS wrestling GOAT?!

You bet he has a case. He’s certainly one of the best I’ve ever seen.