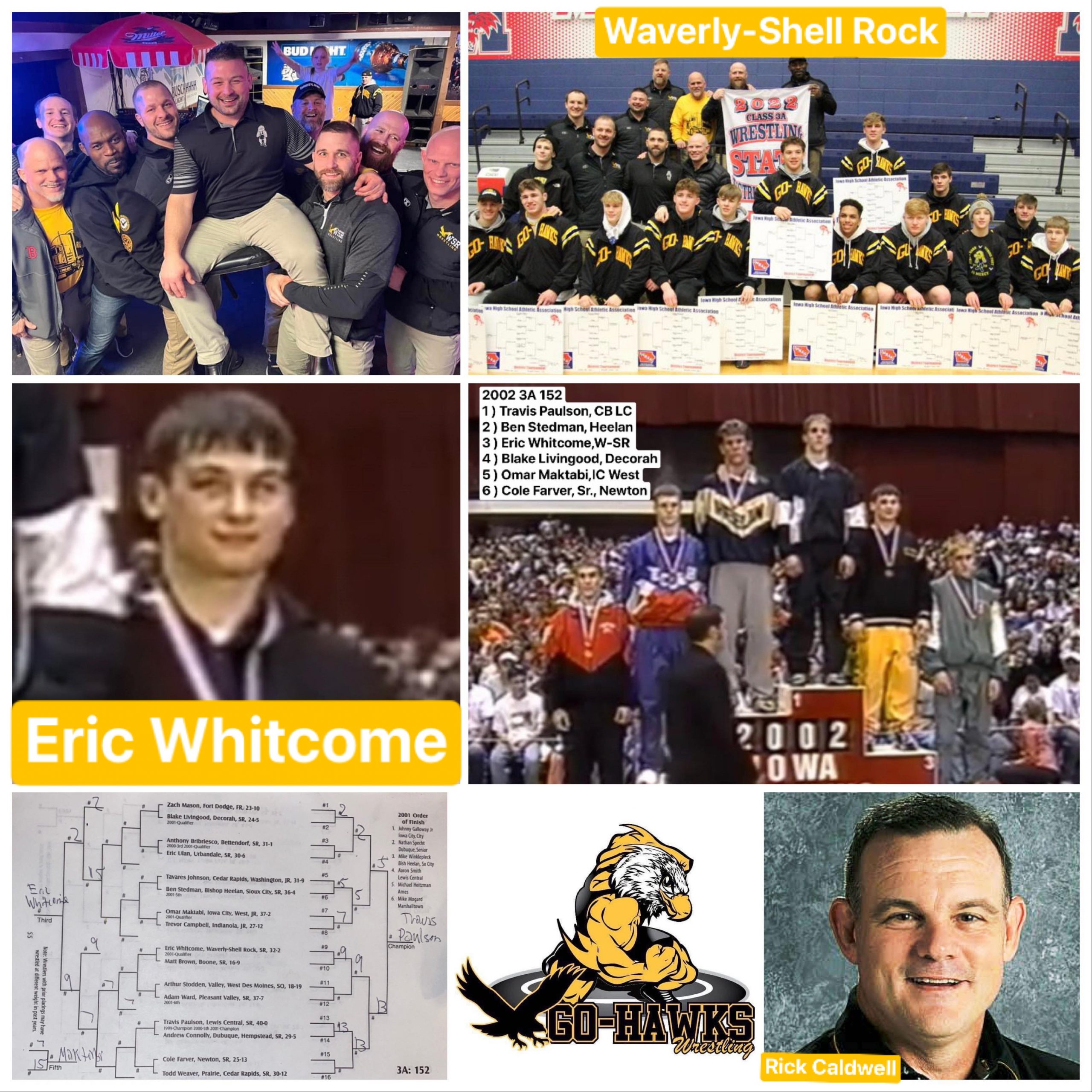 Waverly-Shell Rock… just when I think a wrestling program and the individuals affiliated with it can not possibly out-do itself or merely “add on” to the accomplishments that they’ve already had their names stamped on for years, the Waverly-Shell Rock wrestling team reminds me on an annual basis that there are still pages in the history books that they have yet to be written. I mean, this is a team that set the scoring record with 225 points at the state tournament in 2008. This is a team that has won what, 8? wrestling team titles as well as 5 state dual titles? Something crazy like that. It’s become difficult to keep track of. It had gotten to a point where you catch yourself thinking, “what more could they possibly accomplish?” a long time ago. Yet, here we are in 2022 and the Go-Hawk wrestling team out of Waverly-Shell Rock, led by HC, Eric Whitcome continues to prove that there is still a lot left to accomplish that hasn’t been done before. Their most recent accolade occurred this past weekend when Waverly-Shell Rock became the first team ever to qualify all 14 guys in their lineup to the Iowa HS State Wrestling Tournament.

So… where to start?

Eric Whitcome qualified for state as a Junior in HS in 2001 at 3A 152 with a 25-9 record for the Waverly-Shell Rock Go-Hawk wrestling team which at the time was led by future HOF coach, the legendary Rick Caldwell. That year, Eric was in one of the toughest quarterfinals of the entire tournament. I was at the same weight that year, but in 2A, so I would know… I wrestled all of these guys. He drew Marshall Marquardt of SE Polk first round. To give you an idea how good Marquardt was… 2 weeks after the state tournament, Marquardt placed 2nd at the Mick Pickford Tri-State Freestyle Tournament, in which I placed 3rd in after having one of my best ever outings of my own wrestling career. This was roughly a 50-man bracket that consisted of 7-8 Iowa/Illinois/Mizzou state champs in it as well as a couple 3Xers. And as good as I felt my weekend was, Marquardt’s was better! Marquardt became the only opponent I ever faced to ever hit a 5-point suplex on me. He was one of the best wrestlers I ever faced in HS. He probably beat 4 state champions that weekend. And that’s who Whitcome drew first round at state as a Junior. And the winner/loser of that match got to face the winner/loser of eventual 3Xer, Johnny Galloway of IC West and returning 3rd placer, Anthony Briebriesco of Bettendorf. I don’t know who won and loss between these guys with an exception of Galloway winning both matches, but I am sure there were some battles. Needless to say, Whitcome did not place as a Junior that year. However, he did get to witness one of his teammates, Travis Behrends win a state championship at 3A 189. In doing so, Behrends became the first state champion for the Go-Hawks since 1990 when Justin Greenlee won the 3A HWT title. I’m not sure who may have known or expected it coming at the time, but this championship that Behrends won was the first “sign” of a spectrum of accolades to come for Waverly-Shell Rock wrestling and Eric was right there from the beginning.

In 2002, Eric qualified for state at 3A 152 again, but this time with a record of 32-2. He won a competitive quarterfinal that included Adam Ward from Pleasant Valley, who placed 6th as a Junior the year before. However, Whitcome fell in the semifinals to Travis Paulson, who was en-route to winning his 3rd state title that weekend. That is the 2nd year in a row that Whitcome had a 3Xer on his quarter or half of the bracket. Whitcome bounced back in style, for in the semi-consolations, he defeated Omar Maktabi of IC West who would place 2nd at state the next year and defeated Blake Livingood of Decorah to take 3rd place. Also in this tournament, Eric’s little brother, Clint Whitcome placed as a Freshman in HS at 3A 112. This was the first of what ended up being 4 trips to the podium for Clint, who became a 4X placer/1X finalist. 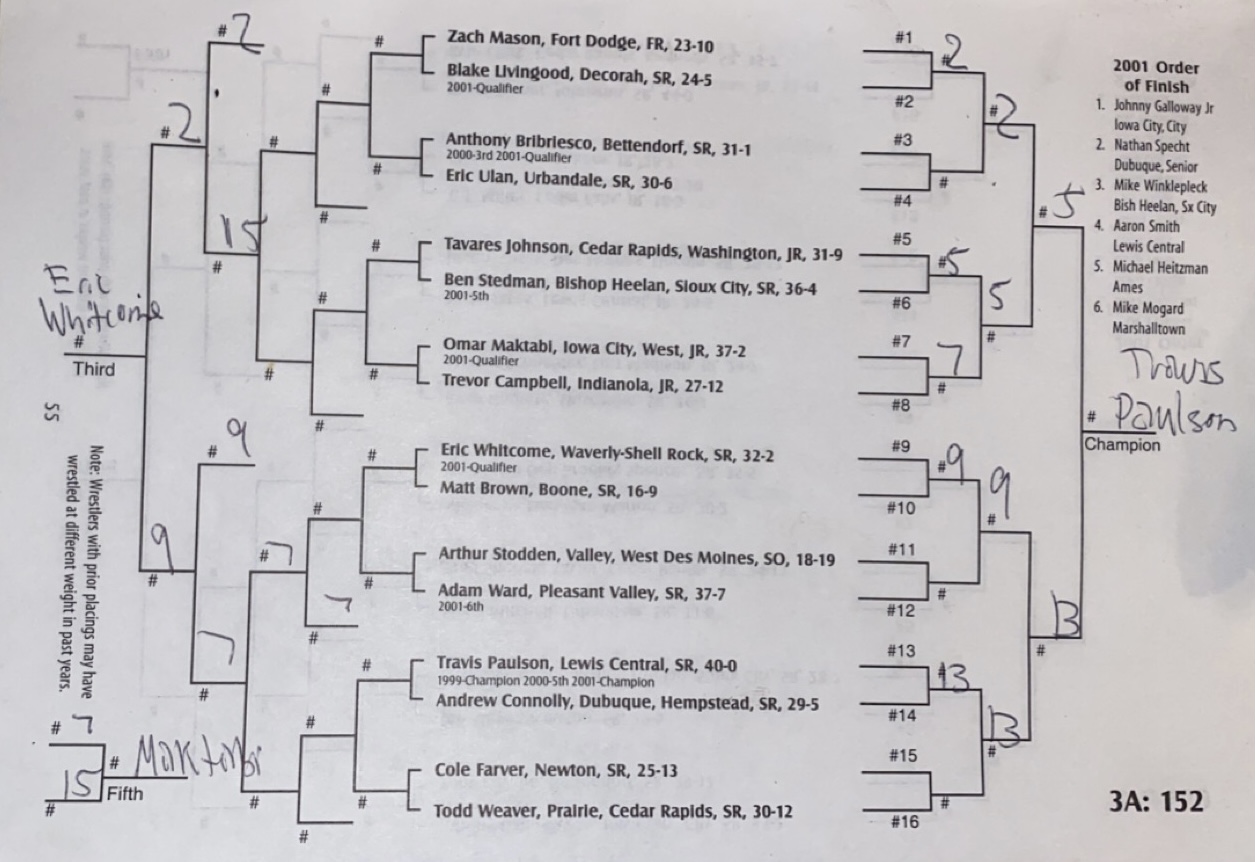 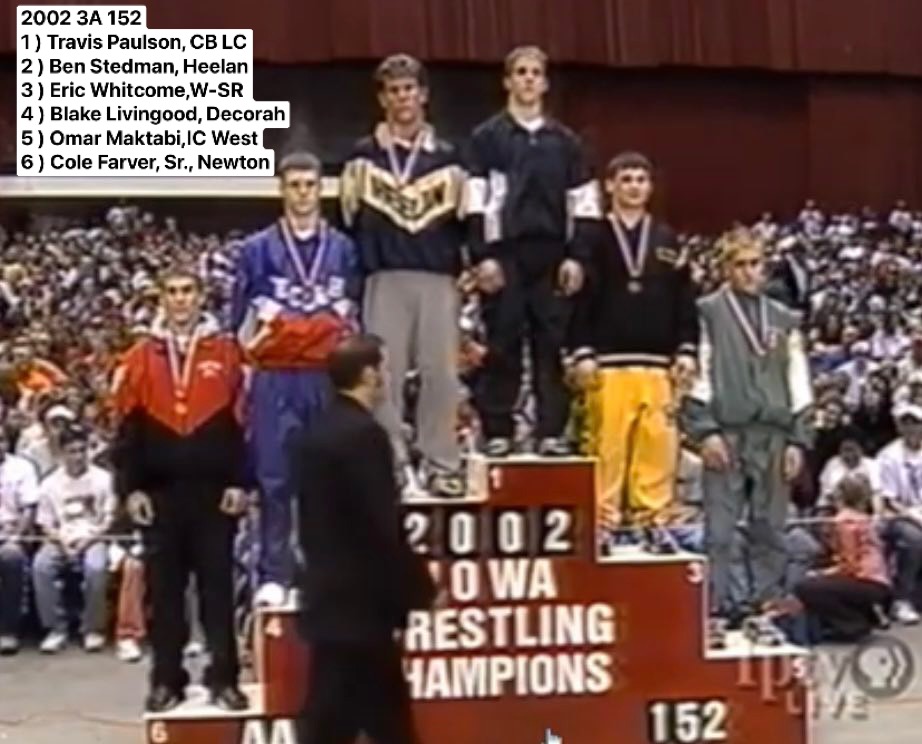 Eric Whitcome went on to play rugby at UNI and I don’t know if it was during college or after, but I believe he helped as an assistant coach at Waverly-Shell Rock for a few years around this time, before becoming the Head Coach at Knoxville in the late 00’s/early 10’s. He was HC at Knoxville for 3 years before coming back to Waverly-Shell Rock. He took over the role of Head Coach for Waverly-Shell Rock in 2012, a role that had been occupied by Hall Of Fame coach, Rick Caldwell who retired after one of the most dominant runs ever, in which he led the Go-Hawk wrestling team to 5 team state championships in 2005, 2008, 2009, 2010, 2011 as well as several State Dual titles. Some rather large shoes to fill… and luckily enough for W-SR wrestling, when it comes to the wrestling mat, Eric’s shoe-size rivals that of Shaquille O’Neal’s size 23’s…

Since 2012, Eric has coached Waverly-Shell Rock wrestling to six top-4 finishes at state. He led them to team state championship titles 3 of those years in 2019, 2020 and 2021. He has led them to the State Duals in all, but 2 of those seasons and has led the team to 2nd place twice, 3rd place three times and last year, won the school’s 5th State Dual championship in program history. Whitcome and his staff were honored in 2014 as the Iowa High School Class 3A Head Coach and Coaching Staff of the Year. Prior to this postseason, Whitcome had coached 89 state qualifiers, 65 state medal winners, 23 finalists and 12 state champions. He also coached a spectrum of wrestlers who have brought home hardware at the national level in the Freestyle/Greco scene. Several of his wrestlers have gone on to have success at virtually every college level, including D1.

And as mentioned earlier, the 2022 Iowa HS State Wrestling Tournament does not begin for another couple days, but Whitcome is already off to a great start, for his 2021-22 W-SR wrestling team became the first team ever to qualify all 14 guys of their lineup to the tournament. They are; Alex Hornyak, Zane Behrends, Braxton Westendorf, Sam Hornyak, Carter Fecht, Ryder Block, Bas Diaz, Cayden Langreck, Aiden Riggins, Sean Mwangi, Robert Poyner, McCrae Hagarty, Layne McDonald and Jak Walker. Just think about that for a second… That speaks VOLUMES for the W-SR staff’s ability to prepare their wrestlers, for all 14 of their guys were prepared well-enough to where they at least qualified for state. not one single guy on the team had the usually inevitable “bad day” that usually at least 1-2 guys will have at the wrong time, no matter how deep or good the team. All 14 guys showed up and punched their tickets. 11 out of the 14 won district titles. This is an absolutely unbelievable accomplishment to add to the rest of them.

And it doesn’t end there… In 2019, Whitcome began Waverly-Shell Rock’s girls wrestling program and it has since gone on to win the State Team Championship in 2019, 2020 and 2021. At this point, he has coached six girls state champions, 12 finalists, and nine place-winners while being named NWCA’s Iowa Girls Wrestling Coach of the Year.

What’s impressive is how vocal Eric’s supporting cast of assistant coaches are in terms of the respect they have for him. Most of these coaches would have success if they were to be the head coach of their own squad, but they choose to go to war with Eric Whitcome instead. Guys like Mike Schwab, Brett Wheelan, Alino Djoimessi, Brett Behrends, Nick Sand, Josh Meier, etc… They are all a part of something so special and what they bring to the table is immeasurable, as well!

As a guy who remembers Eric from being around the same age and weight-range as me in HS, it is really cool to see this guy represent us “early 00’s” guys by so quickly becoming this generation’s version of Al Baxter. This man is not even 40 yet and is already a legendary Iowa HS wrestling coach. It’s crazy to think that he will likely still be coaching for decades to come!

Previous post: The Gauntlet That Was The 1996 2A Wilton District