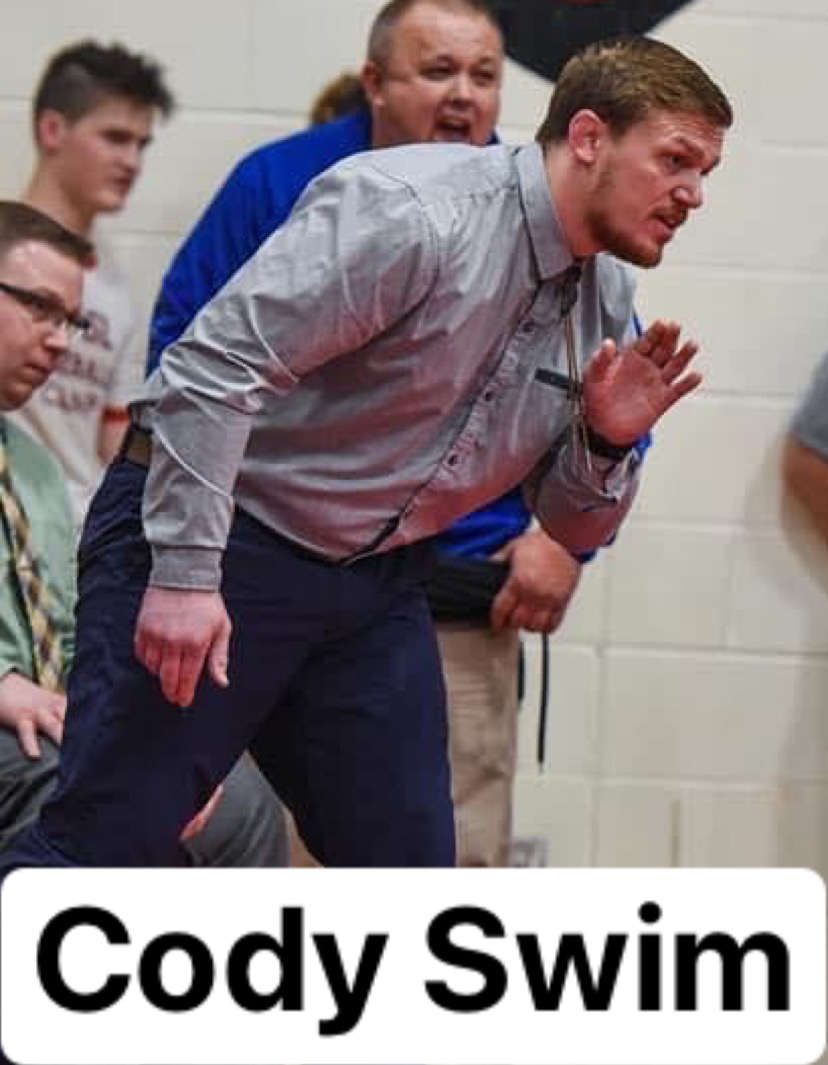 Cody Swim was a 4X placer who was never more than one loss away from winning it. All 4 years, he lost only one match at state, placing 3-2-3-3. And he was always in brackets that had some of the most respected names in the game at the time. He is, in my opinion, one of the best wrestlers of that entire era that he wrestled in, which is saying a lot considering some of the absolute wilderbeasts that came from his era despite never winning the state tournament. I mean, the kid only had 7 career losses (one was from a slam call), which means that he only had 3 regular season losses ever…I know a lot of people (and I am one of the most guilty ones) place a lot of emphasis on the state tournament, for it is undoubtedly the most prestigious tournament of any HS kid’s HS season, but when it comes down to it… state is only one tournament… and in the other 140 or so matches he had outside of state, he was defeated only 3 times… incredible. 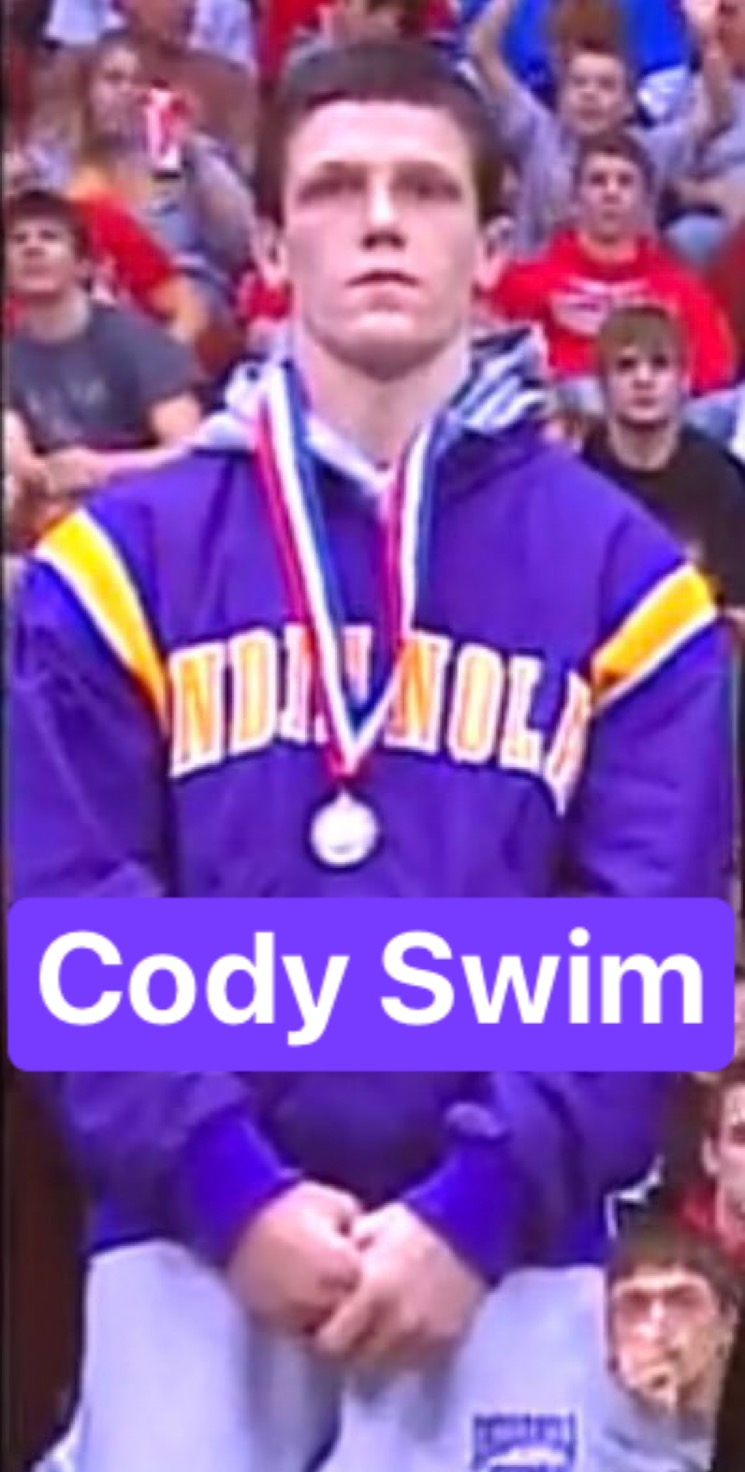 And he went on to have a nice collegiate career at Grand View and is now in the process of putting together a very respectable coaching resume. In 2019, I met some of the guys he coached from Des Moines North-Hoover while covering wrestling for The Predicament and a couple of those guys were among the most impressive individuals I interviewed that season, in which there were a couple hundred. And they all have great things to say about Cody. He’s been a great influence on and off the mat. 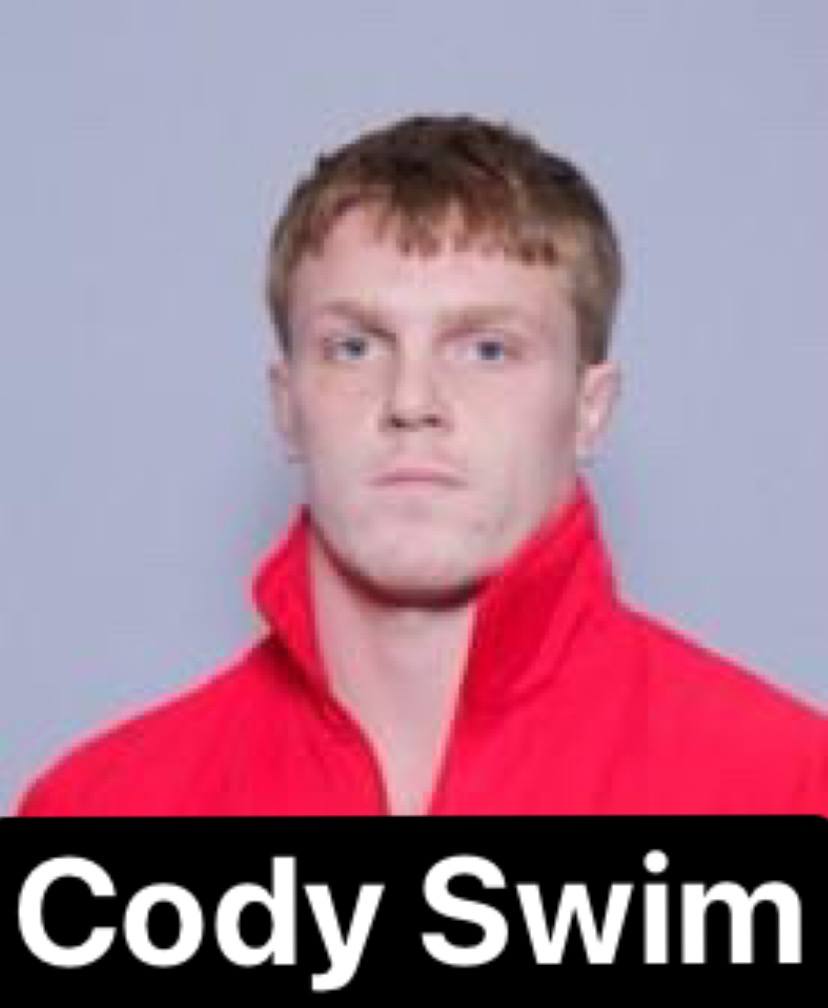 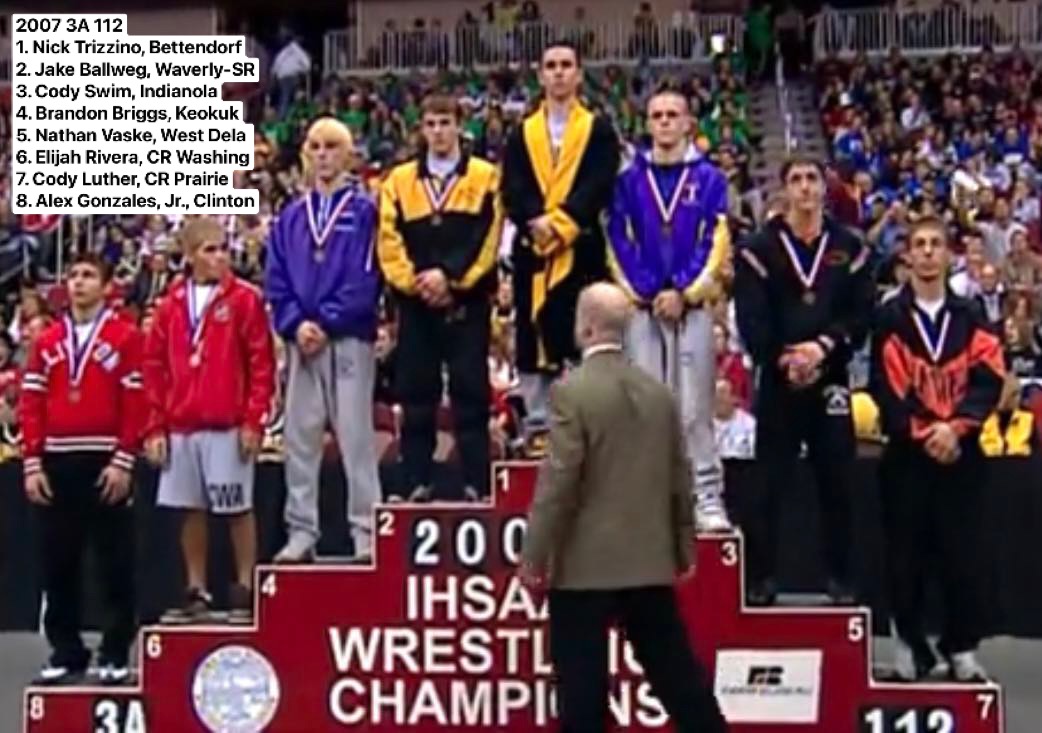 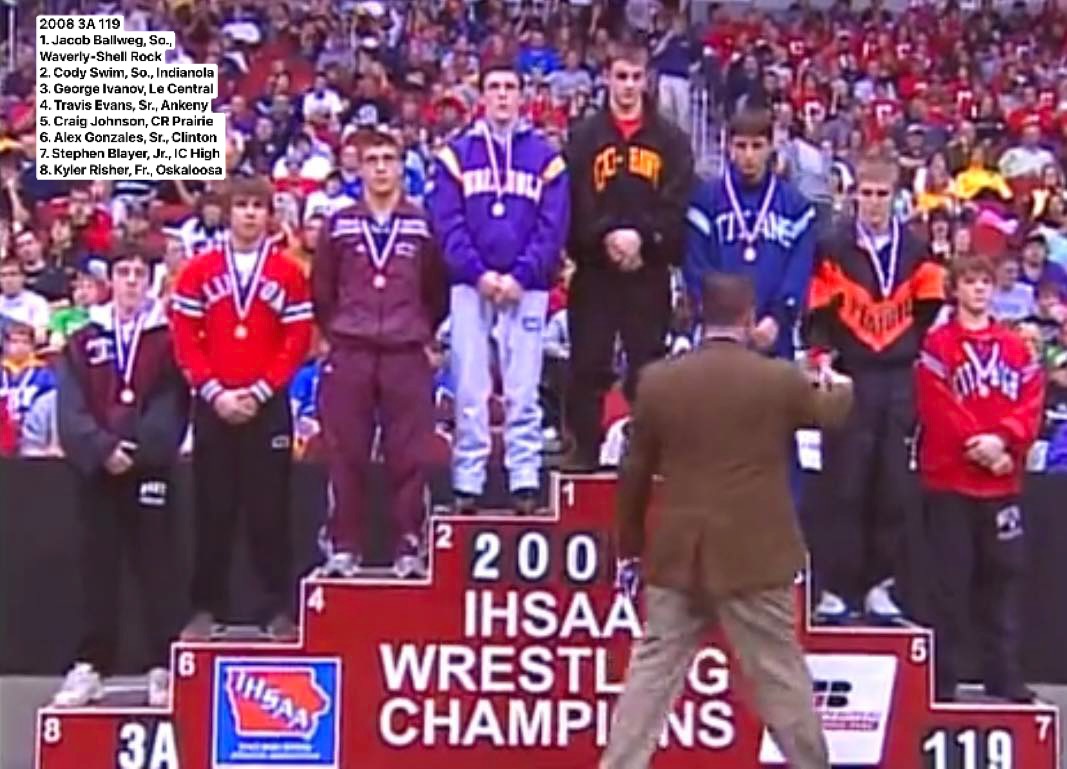 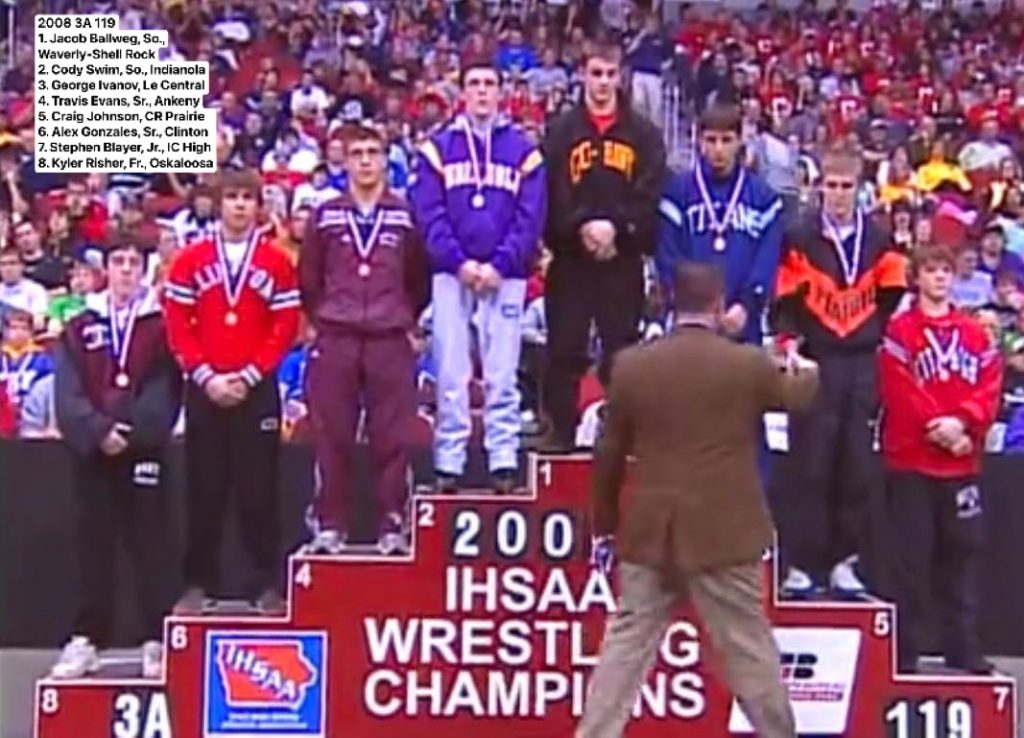 Here is Cody Swim’s story told by Cody Swim himself!

– When I was in Kindergarten I came home from school with a sign up sheet and told my parents I wanted to do it. At the time I didn’t really know what wrestling was but I did know what WWF (WWE now) was and thought that was cool. No one in my family wrestled before me.

– No, I do not. I have a 4 year old son who may end up wrestlingif he chooses to.

PINDOX: What were your youth results? Any rivals there?

– I placed at state a few times in my younger years and started picking up the pace in middle school and placed 3rd at state in 8th grade and won the Tulsa kickoff in 9th grade.  I wrestled Tanner Weathermen from Ballard, Brown from Oskaloosa, and Nick Moore a lot when I was younger.

– 158-7  *( 1 loss came from a single leg being called a slam my freshman year. It was a close dual with Iowa City High and the kid laid down to get the 6 team points. Luckily I got to wrestle the same kid at state 1st round).

– The biggest challenge was the state tournament and then cutting weight throughout the season. I believe I put too much pressure on myself when it came to the state tournament. I was close a bunch of times but wasn’t able to accomplish what I wanted. However, once I lost I was able to refocus and come back better. For weight cutting I didn’t really overcome that challenge until I learned how to do it the right way. Weight cutting definitely had lasting effects on my relationship with wrestling. I was anywhere from 13 – 17 lbs over the day after a weigh in. If I could redo it I wouldn’t cut weight and just focus on getting better and stronger.

– I would say my style was more of an aggressive style but also I wanted to be as technical as possible. I had the mindset to make sure my opponent didn’t want to wrestle against me again whether I won or lost.

PINDOX: How many guys in high school did you go back and forth with or exchange wins with?

– There were a few guys I went back and forth with. Gustavo Martinez, Gabe Moreno, Nick Trizzino and Ben Cash.

– I would say I had a lot of influential people and coaches throughout my career. As a youth wrestler Chuck Tyler, Chad Walker, and my dad put in a lot of time and effort into my wrestling. Middle school Coach Rogalla, Anthony Porcelli, and Chad Tunink all helped me a lot. In high school Matt Young and Chad Tunink also helped me a lot. In college I wrestled under Nick Mitchell and he definitely influenced me. That guy could travel the country and be a motivational speaker.

– In high school we always made it state duals and did well. I believe we won districts every year and won the CIML often as well. In college we were very competitive at Grand View.

– There were many but a few of the guys I loved to watch and learn from were John Smith, Mark Perry and Johnny Hendricks.

PINDOX: Are there any wrestlers you’ve seen, past or present that you would compare your style to?

– I tried to be like Mark Perry on top and John Smith on my feet.

– All of my high school wrestlers first. Then it goes David Taylor, Bo Nickal, Jason Nolf, Gable Steveson, and Yianni.

– Everything, but for some reason ACDC and Tupac really got me going.

PINDOX:What was the most upset you ever felt after a loss?

– Junior year at state losing in the quarterfinals to Brett Baumbach. We were both in the same scoring position. My takedown didn’t get called, but when he was in the same position his did. That was tough to swallow, but when it comes down to it I shouldn’t have left it up to a call and Brett Baumach is a great wrestler!

PINDOX: What was your best wrestling memory or accomplishment?

– Winning our first ever national title at Grand View for duals and the tournament.

PINDOX: Who were some of your most notable competitors in high school? College?

– I started wrestling all year toward high school.

– Thats a tough call. Wrestling is constantly evolving. But I feel like the guys today would get the better of the guys way back in the day.

– I played baseball until 6th grade and Football until High School.

– Spending time with my son and family. I also enjoy playing with my rottweiler Ragnar, fishing, and working out.

It feels extremely good to give back to the sport and community. This sport has shaped my life. You learn so many valuable lessons that translate to the real world. Wrestling helps you endure and overcome tough situations. If I can help mold our youth into contributing citizens of society through wrestling, then I am happy.

– Wrestling has taught me so much about life. Like I said previously it really helps you get through tough situations. It has taught me to never give up and to chase my dreams. It has instilled hard work and respect that has definitely benefited me. Wrestling has made me a better person.

PINDOX: Are you still involved with wrestling?

– Yes. I am the head coach at Interstate 35 and I also offer numerous camps throughout the summer.

– Trust the process and your coaches. Work hard but also have fun. Lastly, don’t cut weight. Focus on getting better and stronger.

– I’ve floated the idea of doing the Stalemates Street League.

PINDOX: Would you like to give a shout out to anyone you wrestled with, against, coached, etc.?

– I’d like to thank all of the coaches and past/current wrestlers I’ve coached. They all have had an impact on my life and I thank them for that. I’d also like to thank my family and girlfriend for always supporting me. I’m a pretty lucky guy to be surrounded by so many great people!

PINDOX: Do you have anything to add? Funny/interesting stories? Trivia? Etc.

– Lastly, I’d like to thank Damon Bryan. I share a classroom with him in the high school and I know he’d be upset if I didn’t mention his name.

Previous post: Some Interesting Things About The 2008 Iowa HS State Wrestling Tournament; 3A 145