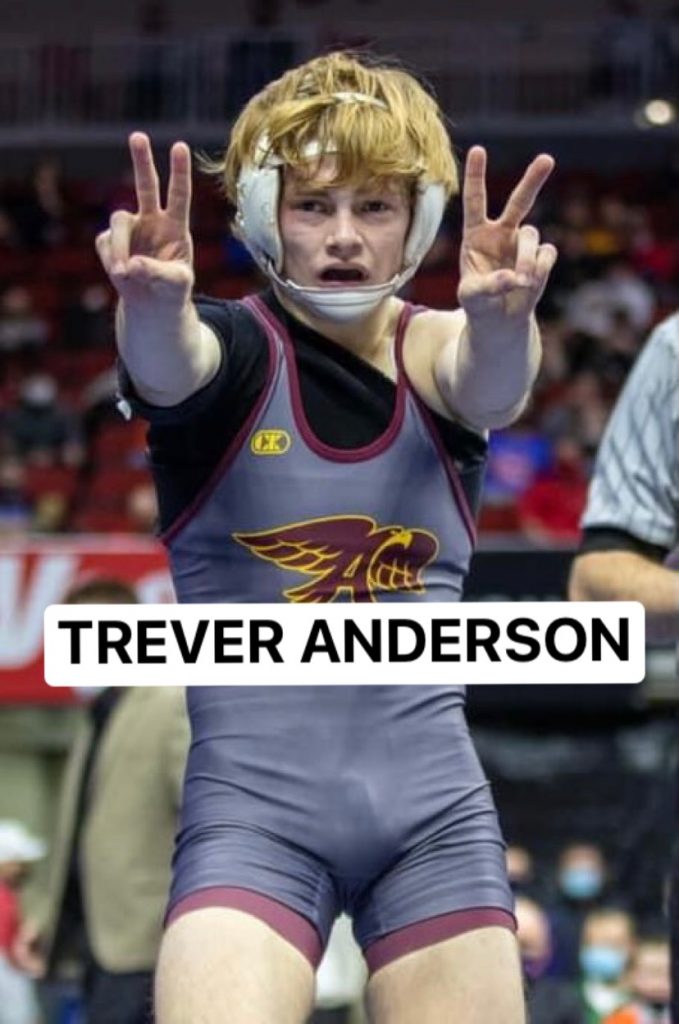 Trever Anderson is an absolute warrior. He is one of the most ferocious and persistent competitors in the Iowa HS wrestling scene right now and has won 2 state titles and placed 3rd the one year he did not win it, which was his Sophomore year. For some reason, Trever has had to do a lot more than the average wrestler to prove how incredibly good he is to certain fans and I don’t get it. I understood it to an extent his Freshman season, for he was at 3A 106 that year and the main two wrestlers in his grade/weight range that had been considered unbeatable by the parents and fans that followed that crop of kids were Carter Fousek of Crestwood and Aiden Riggins of Waverly-Shell Rock. Those two were perennial winners for years at that point and people just simply didn’t think they could be beaten… That year, Fousek was at 2A 106 and Riggins was at 3A 106.  Anderson was also at 3A 106, so he would have to get through Riggins if he wanted to win state. Anderson’s wrestling development was gradual, but steady and never plateaued…He usually placed at AAU, but never won it. 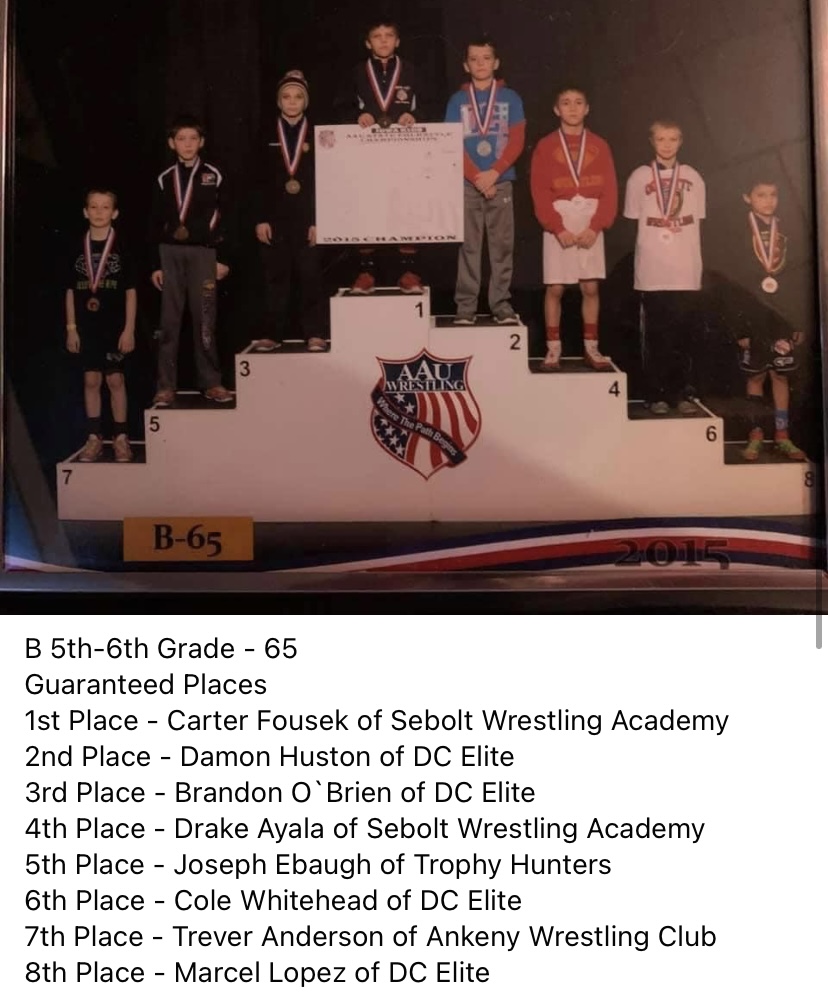 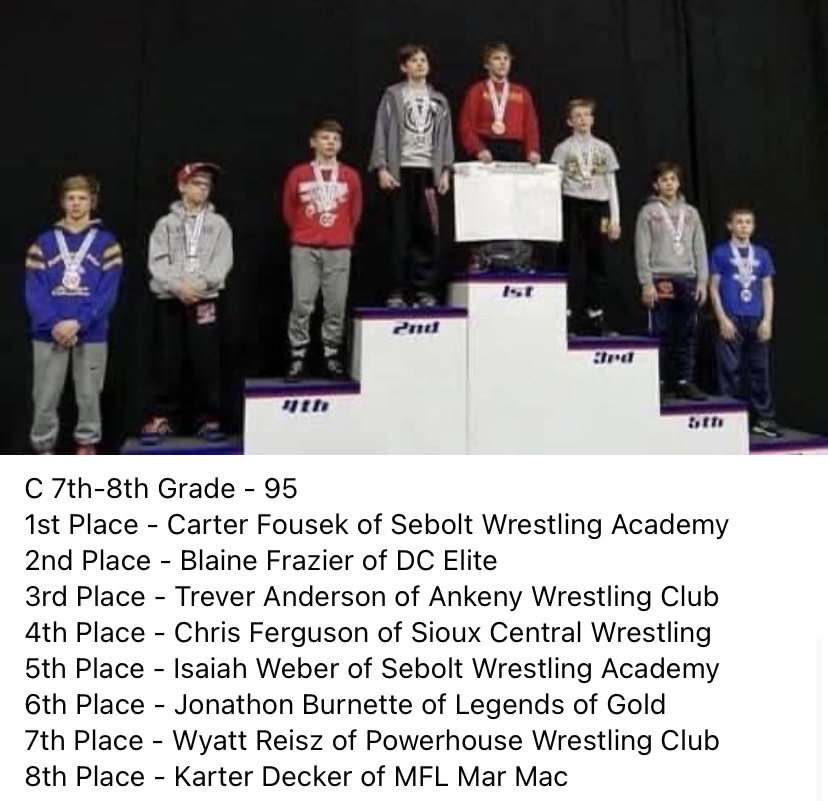 So Trever had some doubters coming into state, despite the fact that he had actually won his last match against Fousek during the regular season and Fousek beat Riggins at that same tournament. It seemed they were all neck and neck, but fans still seemed to think it was a foregone conclusion that Anderson would not beat Riggins at state. And when he actually DID beat Riggins in the semis that year, I think the general spectators finally started coming around to Trever a bit. Fousek and Riggins were elite-level wrestlers….but so was Trever Anderson….and so was Blaine Frazier from Notre Dame as well as Marcel Lopez who won 1A 106 that year. There were a lot of Freshmen who made a splash and proved themselves that year. Anderson went on to claim the 3A 106 title after defeating Jace Rhodes of Mason City in the finals. 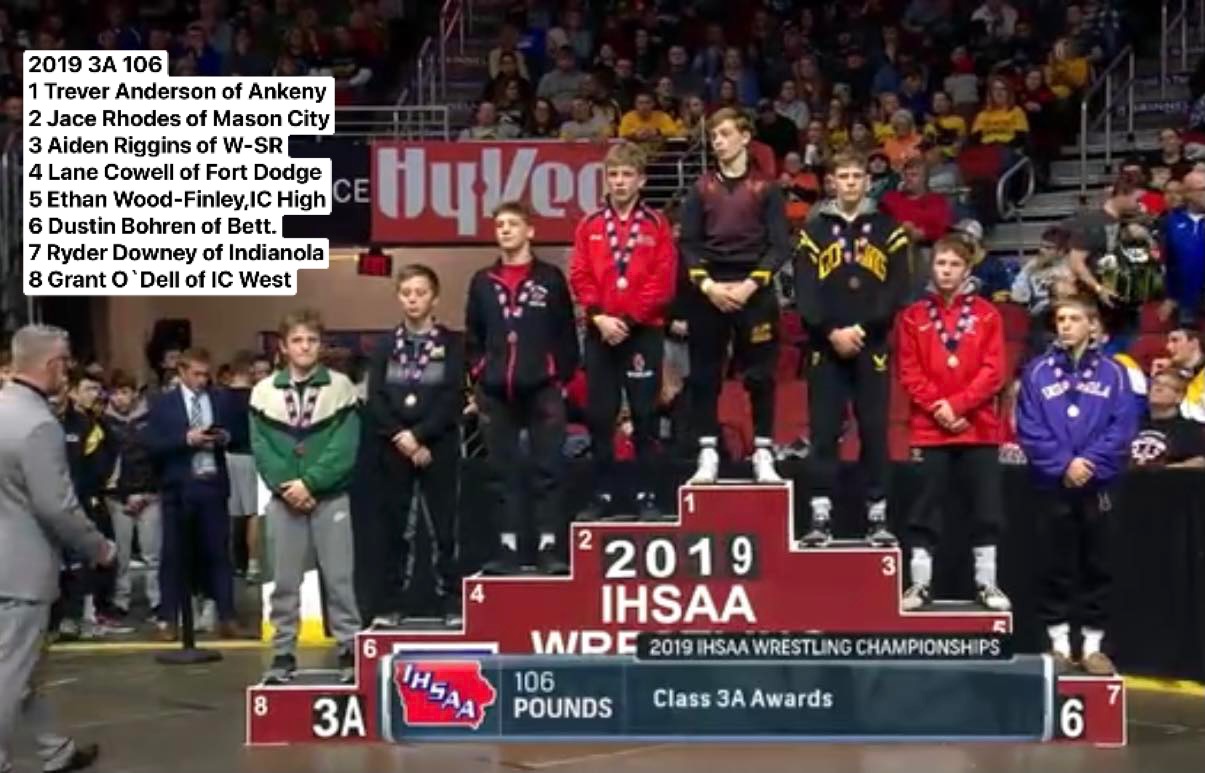 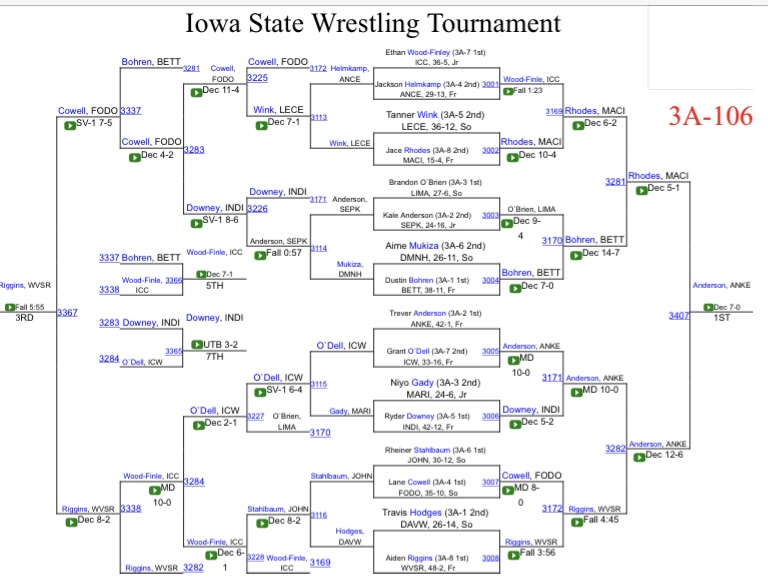 As a Sophomore in 2020, Trever was at 3A 113. That year he was defeated at state by Ryder Downey from Indianola. This upset Trever quite a bit, but he took his anger out on his opponents in the consolations and placed 3rd. 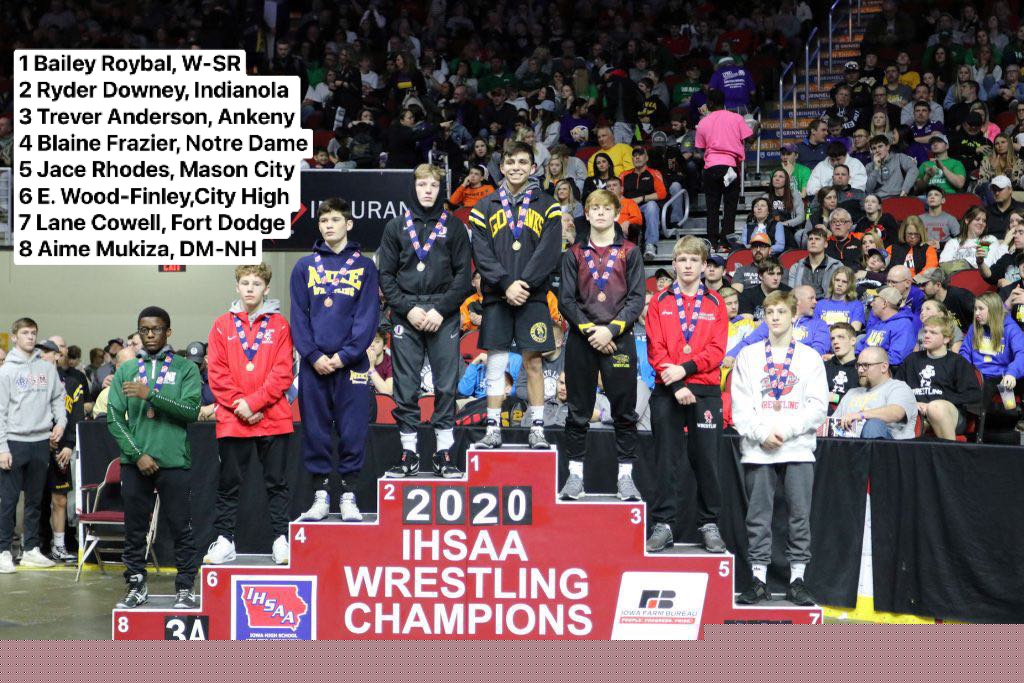 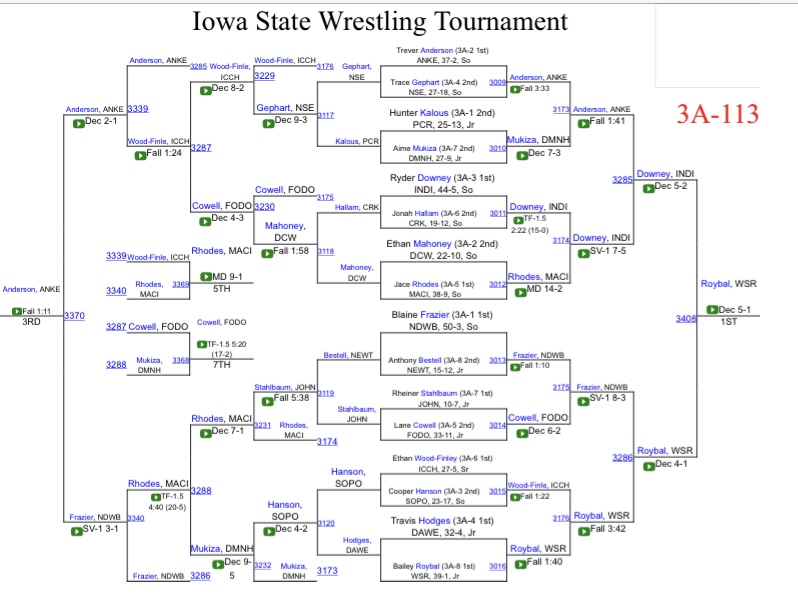 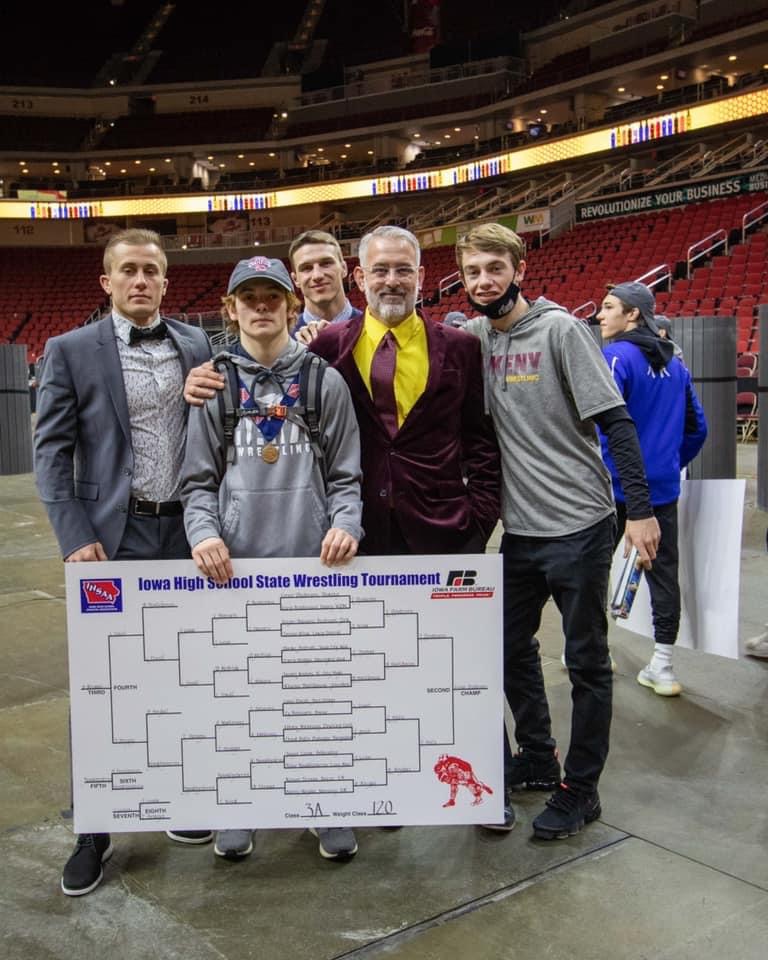 As a Junior in the 2021 season, Trever came in with a hunger to bounce back from the season before in which he fell short of accomplishing his goal of winning state. However, he would have to get through some adversity in order to accomplish this, for he tore the labrum in his shoulder.  And as much pain as Trever was in, he was still able to grind through it and he ended up winning his 2nd state title at 3A 120. And he had to beat a kid who was on fire named Chad Bellis from Hempstead to do so. Bellis was new to Iowa and had won a title in Illinois prior to moving to Iowa. He also took out the retuning state champion, Bailey Roybal from Waverly-Shell Rock in the semis. With Anderson ailing from a shoulder injury as well as having 2 blemishes on his record coming in, people were starting to count him out again. And guess what happened?! Trever Anderson brought the fire again and beat Bellis by the score of 3-2 to secure his 2nd state championship. 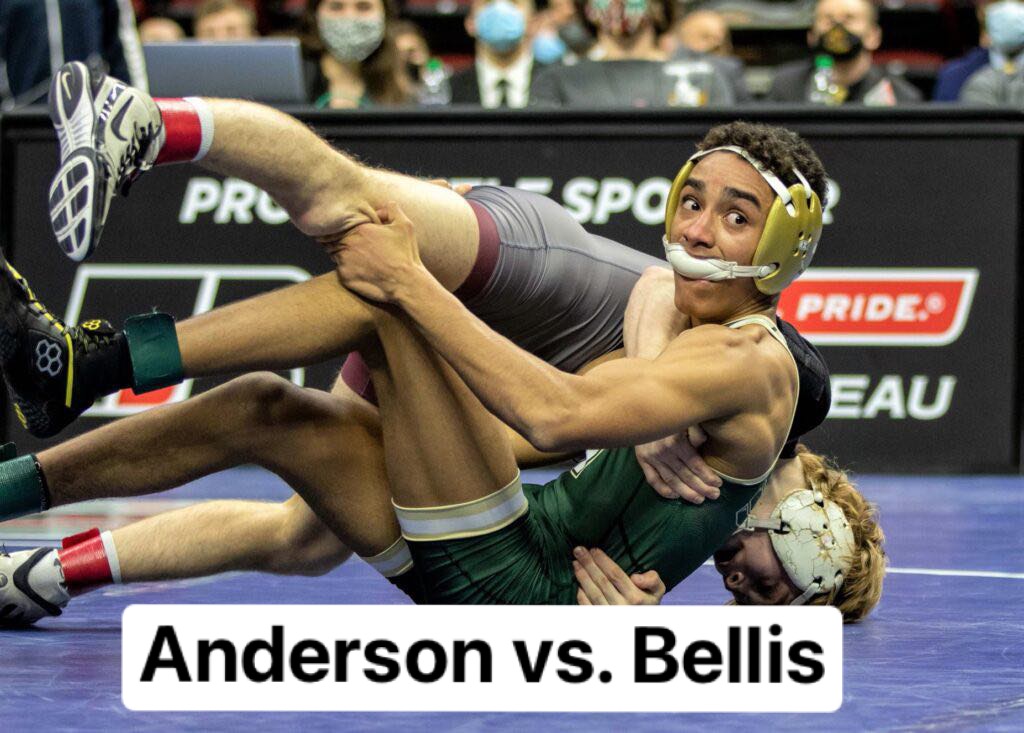 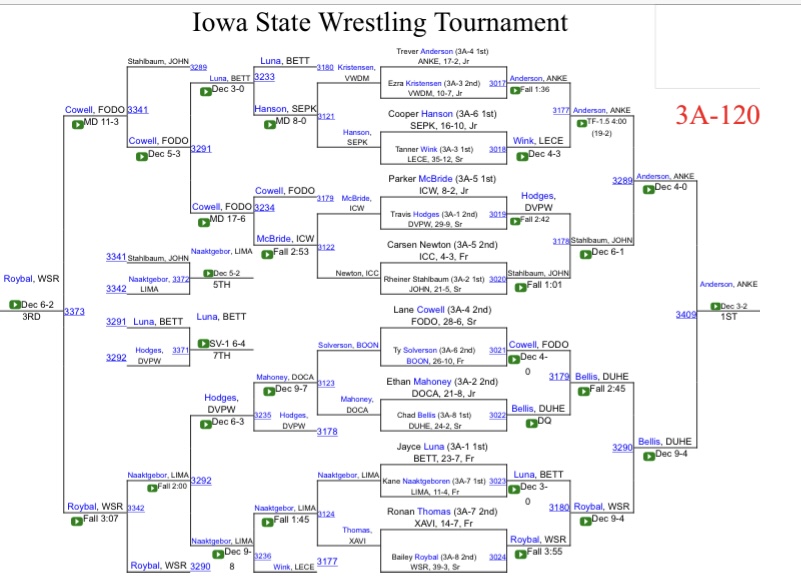 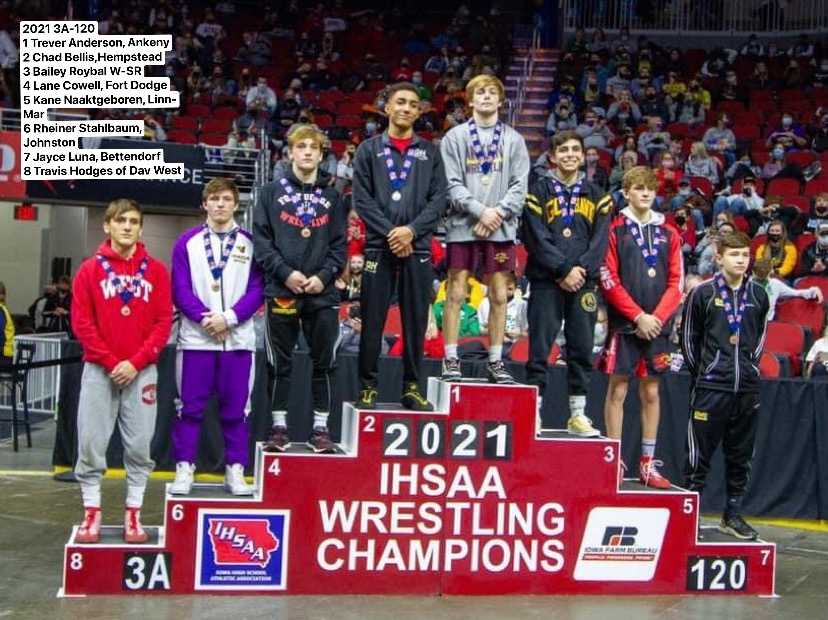 So there’s some background info on Trever, now let’s hear from him! And on a sidenote, I’ve done a lot of these Senior Spotlights over the years and Trever is hands down, one of the best writers I’ve come across. I didn’t even have to correct one typo.

I started wrestling when I was five years old. My Dad was a wrestler and I’ve also been friends with the Rathjen family since I was born basically, so wrestling has just always been in my family.

I didn’t catch onto wrestling very quickly. I always enjoyed it but I was never really good. I placed at the AAU state championships multiple times but I never would beat the really good kids when I was growing up. It’s been a gradual process.

I wrestled for Ankeny Wrestling Club my entire youth career and High Altitude from sixth grade to my freshman year. My experiences with those clubs helped my development a lot. Topher Ewing and Mitch Mueller we’re both great role models throughout my youth career and I still look up to them to this day. High Altitude helped me really get a love for wrestling. Going up there every Sunday made me start to love practice and the grind and process that comes with the sport.

My memorable moments from my youth wrestling are definitely AAU state just because Topher and Mitch and the club would bring everyone down and we would all watch each other. As a club we also did some dual tournaments, which were very fun. Taking the bus down to the dual tournaments together was always fun. Getting the team aspect involved in the club rather than just individual tournaments was fun as well.

Some memorable things from the start of my high school career are definitely the 2019 State Tournament when Caleb and I became the first duo to win state since 2003. I enjoyed my freshman year a lot. The 2021 State Tournament was awesome as well with being able to overcome a lot of obstacles that I endured that year. But most of all the best thing throughout my high school career is the relationships I’ve developed with my coaches such as Austin Anderson, Ryan Sheldon, Derrick Huber, and Jack Wignall. I’ve developed some friendships with my teammates such as Sam Kallem and Caleb Rathjen that will go on past my high school and college career.

My wrestling heros growing up were Topher Ewing and Mitch Mueller. With them being my club coaches my whole youth career they inspired me a lot and still helps me to this day. My college wrestling heros were Cory Clark and Thomas Gilman, I grew up watching them and loved the way they wrestled. A person I look up to is TJ Sebolt because of his heavy involvement in my development.

I would have to say I made a huge jump after my sophomore year. Once COVID hit, I began to train a lot with Sebolt Wrestling Academy during the summer, which has helped me not just look at state titles as goals but rather put myself on the National level and try to win national titles. The change in mindset has been the biggest jump for me after I lost at state my sophomore year. TJ Sebolt has helped my wrestling drastically and helped me change and reinforce the mindset of trying to be the best in the world. He also preaches to bring that mindset into every aspect of your life no matter what it is, which is something I try to do.

In high school I’d say my toughest competitors were Nate Jesuroga and Carter Fousek. Nate I only got to wrestle once but as everyone saw this summer, he’s a really tough competitor. Carter I’ve wrestled 4 times in high school and each time it’s a fun match to wrestle in.

Last year’s State tournament was my most memorable just because of all the adversity I faced with tearing my labrum and trying to avenge what happened my sophomore year. It’s close but I would have to say the 2021 tournament was just a little better than 2019.

My wrestling goals for this season are to win a Super 32 title this October, win a third state title this winter, and win a Fargo title this summer. I’ve been out for a while and I’m stoked to be back.

I would say my wrestling style is more loose and focuses on counter attacks. I’ve been known not to score lots of points but my goal is to continue working on that with TJ.

I wish I could make up the 2020 state tournament. Losing in the semis was one of the worst experiences I’ve had. Although that loss did have its benefits. It has helped me and continues to make me jump levels with my wrestling and mindset.

I play soccer where I played as a freshman, we made state that year and lost to the eventual runner ups. I haven’t been able to play for two years though due to COVID and my shoulder.

I enjoy watching wrestling, playing PS4 with my friends, and watching football.

The best advice I’ve ever received was actually not too long ago. TJ said at practice “greatness is for the few, the few that are willing” and it’s stuck with me ever since. I have it as my background on my phone now.